Italy in the war with the USSR 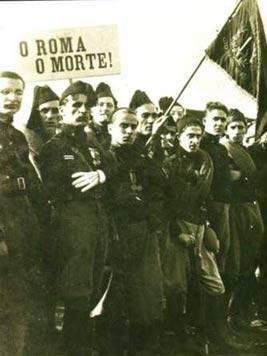 Hitler hid from his ally Mussolini, preparing for war with the USSR until the very attack of 22 in June of 1941 of the year. Only on the night before the attack was Rome informed of this event. The Italian leader (duce) immediately instructed the Foreign Minister, Ciano Galeazzo, to inform the Soviet envoy that Italy, in accordance with her so-called Third Reich. The “Steel Pact” (German-Italian Treaty of Union and Friendship, signed in May 1939), declares war on the Soviet Union. A letter to A. Hitler with a proposal to send Italian troops to the Eastern Front was written by Benito Mussolini personally. At the same time, he ordered the preparation of the Italian military contingent for the war with the USSR.


Mussolini was not against the war with the USSR - “The Crusade” was his favorite idea. But the Duce believed that Italy would not be ready for such a war before the 1945-1950, when the programs for re-equipping the troops were to be completed, their combat effectiveness increased. The blow of Germany, with the participation of Hungary, Romania, Finland, when Rome was not even warned, not to mention the offer to take part in the war, struck at the status of Mussolini, Italy. In addition, the Italian leader wanted to get his share in the division of "bear skin", and without the participation of Italian troops in the war, it was doubtful.

Hitler did not count on the serious assistance of the Italian troops, knowing full well their price - the Wehrmacht already had to rescue the Italian army from a difficult situation. And therefore he proposed to focus all the attention of Rome on the Mediterranean region, in North Africa.

But Mussolini insisted: “Italy cannot be absent from the new front and must actively participate in the new war,” he told his ministers. An interesting fact is that the Duce, like many other Western politicians, believed that Germany would win quickly during the “lightning war” and was afraid that the Italian units would not have time to fight at least a little. Only 10 July 1941 did Berlin agree to send Italian units to the Eastern Front. For the war with the USSR, a special unit was created: "Expeditionary Italian Corps in Russia" (Italian: Corpo di Spedizione Italiano in Russia, CSIR). It consisted of 3 divisions: the 52nd Torino infantry infantry division; The 9th Pasubio Automobile Infantry Division and the 3rd Mobile Division named after Prince Amedeo, Duke of Aosta (sometimes called the Chelere Division). The word "transported" meant the fact that instead of special army equipment in the division used a variety of civilian vehicles. The auto transport divisions consisted of 2 infantry regiments and 1 motorized artillery regiment, plus support units. The 3rd mobile division included: 2 cavalry regiment (3rd dragoon cavalry regiment "Savoy", 5th ulan cavalry regiment "Navarra"), 1st artillery regiment, 1st regiment of bersaliers (from Italian. Bersaglieri - elite arrows they were equipped with bicycles and motorcycles) tank the San Giorgio group is armed with a small number of L3 / 35 tankettes, Fiat L6 / 40 light tanks and Semovente 47/32 anti-tank self-propelled artillery systems. The corps also included the 63rd Tagliamento Legion from the so-called. "Voluntary National Security Police" (they were also called "black shirts"). In total, there were 62 thousand people in the corps (3 thousand officers and 59 thousand soldiers), 5,5 thousand motor vehicles. The corps was commanded by General Giovanni Messe, who replaced the ill general Francesco Zingales. 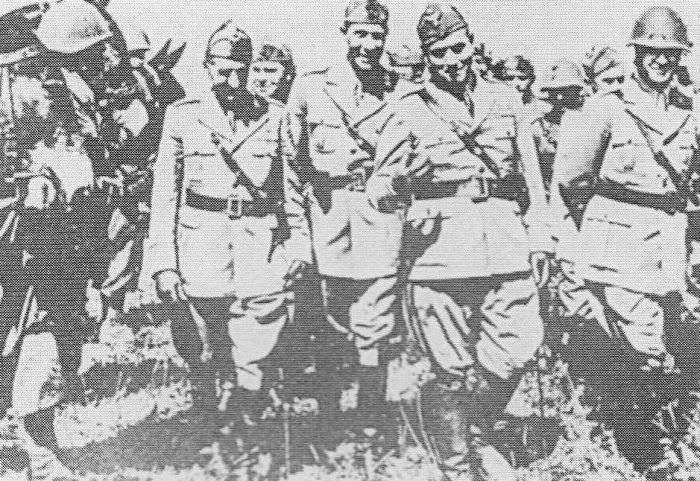 The commander of the Italian Expeditionary Corps in Russia, General Giovanni Messe (second from right) inspects the transport part of the Torino division.

The corps arrived at the front in July-August 1941 of the year: at first it was transferred to the command of the German 11 th von Schobert, in the middle of August they were included into the 1 th von Kleist tank group, the Italian corps was subordinate to it before the beginning of June 1942 , then the Italian units were transferred to General X. Ruoff’s 17 Army. He fought corps in the south of Russia - in Ukraine.

Part of the corps entered the war in August 1941 of the year - as part of the 11 army tried to prevent the withdrawal of Soviet troops that were located between the rivers of the Southern Bug and the Dniester. As part of the Klest tank group, the Italians participated in the seizure of the city of Stalino (now the city of Donetsk) and the occupation of the nearby cities of Gorlovka and Ordzhonikidze (now the city of Enakievo). Some units of the corps participated in the occupation of the territory around Odessa. Initially, the Italians had a high morale - the Wehrmacht won victory after victory, they were “winners” in the “easy campaign”. But soon - for the winter, the decline of morale began, the lack of uniforms, artillery and other weapons began to be felt. The supply went through the Wehrmacht, which itself was not ready for a long war, so the Italian corps was supplied on a residual basis. As a result, the Italians began looting, and even German warehouses were robbed. In relation to the local population, the Italians were the most "tolerant", were not marked in atrocities, like the Germans, Hungarians, Romanians. Thus, General Messe even created his qualification for atrocities and had the following gradation of cruelty to the local population: “1 is ranked as Russian White Guards; 2-place - the Germans; 3-place - Romanians; 4-place - Finns; 5-place - Hungarians; 6 is the Italians. ” 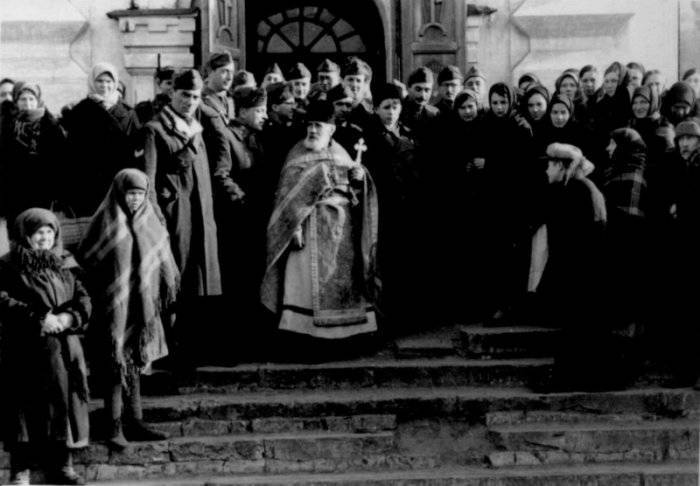 Italian soldiers with parishioners and a priest on the porch of the church. Pavlograd, autumn-winter 1941 of the year. 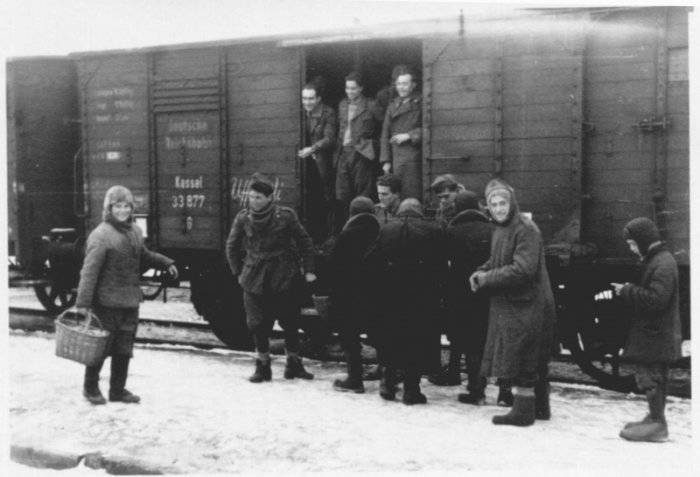 Italian soldiers are buying something from the locals at the Ukrainian railway station. Winter 1941 — 1942 of the year.

But Mussolini himself got into this war and therefore when Hitler demanded to increase the Italian forces on the Eastern Front, he was forced to send additional forces, bringing the Italian forces to the field army - the 8-I Italian Army was created (“Italian Army in Russia” - Italian. Armata Italiana in Russia, ARMIR). In total, 7 divisions were sent to Russia, bringing the Italian forces to 10 divisions, not counting the auxiliary units. These were: the Sforzeska 2 Infantry Division; 3 Infantry Division Ravenna; Kosseria 5 Infantry Division, Vicenza 156 Infantry Division (2 Army Corps), and the elite Alpine Corps as part of the 3 Alpine Divisions - 2 The Tridentin, 3 I and 4-i "Kuneenze". The 3 brigade of the Black Shirts brigade, the 1-on the Croatian volunteer brigade and the 2-ve German divisions (298-I and 62-I) also entered the army. In total, the army had 235 thousand people, it had about 1 thousand guns, more than 400 mortars, 17 thousand vehicles, a small number of light tanks and self-propelled guns (approximately 50 units) and 64 aircraft. Commander of the army, General Italo Gariboldi, Messe opposed the increase of Italian forces on the Eastern Front and was removed from office.

The Italians ingloriously ended their “Eastern Campaign”: during the battle for Stalingrad, in the autumn of 1942, the 8-I Italian army occupied positions on the Don River (area more than 250 km), north-west of Stalingrad. In December 1942 - January 1943 Italian army was actually destroyed during the offensive of the Red Army - more than 20 thousand died, 64 thousand were captured, those who were able to retreat were completely demoralized. The survivors were taken to Ukraine, then the German command sent most of it to Italy. After a coup d'état took place in Italy, Mussolini was arrested - several thousand Italians who remained in Russia to protect rear services were disarmed, then shot by the Germans. Italians did not find fame in this war - showing themselves to be weak fighters, not ready for a real war.

We are in Yandex Zen
From assassination to execution. The path to the death of Benito Mussolini
Diplomats of the People's Commissariat of Defense: on the eve and during the war
6 comments
Information
Dear reader, to leave comments on the publication, you must to register.