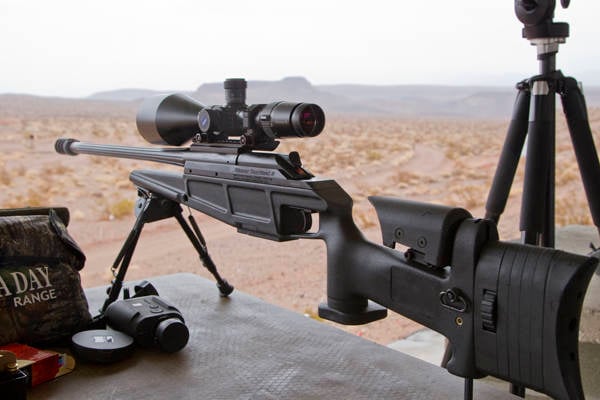 The Blaser R93 sniper rifle LRS-2 / Blaser Tactical-2 was developed by the German company Blaser Jagdwaffen GmbH, which settled in the quiet town of Isnu in southern Germany. Despite its youth, the company occupies a worthy place in the world among manufacturers of high-quality weapons. For amateur hunting these are rifled and combined rifles, carbines. For departments of law enforcement and sports competitions - sniper and high-precision (match) rifles. The pride of Blaser is high-quality rifles and combined double-barreled rifles with barrels paired in a vertical plane - buxflints and tees - drills.

Among them, the most popular is the hunting rifle (carbine) with a longitudinal sliding gate of the R93 series created on the basis of the previously released SR 950 / 88 model. The launch of the first Blaser target rifle for shooting at a distance of 300 m was launched in 1997 year. Having survived a series of four years constructively (technological changes, now this model designed for military and sporting purposes (CISM) is released under the name Blaser R93 LRS-2. The main elements of the design of the Blaser R93 model found their place when creating a Blaser R93 LRS / UIT-Standart sniper rifle (match caliber rifle), which provides high accuracy results. A series of holes of ten shots at a distance of 300 m fit in a circle with a diameter of 28 mm.

The appearance of the Blaser R93 LRS-2 was a logical result of the further development of the R93 model, during the creation of which successful constructive solutions were found for assembling the gate with the barrel and their joint basing on the receiver. As soon as the hunting system R93 was demonstrated to the athletes, a proposal appeared to create a large-caliber sports rifle for military-applied sport on its base. The proposal of the athletes was supported by the then owner of the Blaser company, Mr. Blake.

Distinctive features of the new model are:
special shape of the box;
a massive trunk with a length of 600 or 762 mm with longitudinal ribs;
trigger with force in 1500 g;
detachable magazine capacity for ten rounds.

At the end of 1996, the R93 Match model was born. She fully justified the hopes of athletes on the accuracy and accuracy of shooting, issuing a diameter of dispersion of bullets in 36 mm at a distance of 300 m, but the work of the store and the trigger mechanism required fine-tuning. In addition, there were complaints regarding the strength of the butt and the rifle forearm. There have been cases when, with a strong blow or the fall of a weapon, a fracture of the box occurred. The fact is that it was cast from a light aluminum alloy, and the desire to save on the total mass of the product led to the weakening of the lodge in some places. After analyzing the experience of two-year operation of weapons in sports clubs, they decided to radically change the design of the rifle. In order to preserve the low mass of the new rifle, the box was made of glass-filled polyamide, and the supporting elements of the receiver were made by milling from duralumin. The ten-charge shop was replaced with a five-charge, more perfect design.

Improvements touched the trigger. Compared with previous models, the descent has become “dry” and even shorter. The range of adjustment of the trigger mechanism has been expanded and the number of parts has been reduced. All modifications took less than a year, and in 1999, the first samples of the Blaser R93 LRS-2 model were put into production. Thanks to all the innovations on the new rifle can be installed trunks heavy duty calibers. This is especially true for the .338 Lapua Magnum caliber, which is very popular with athletes and snipers and gives them maximum opportunity to complete their tasks. Blaser R93 LRS-2 rifles can be fitted with all types of optics and dioptric sights. The design of the weapon provides for the maximum adjustment of the box and the trigger mechanism. By mass, the LRS-2 can be ranked as average in its class.

The Blaser R93 LRS-2 rifle is available in various calibers. To ensure high accuracy for each cartridge, the barrel has its threading pitch: .222 Rem./356 mm; .223 Rem./229 mm; .243 Win./254 mm; 6 mm / 305 mm; 6 mm / 203 mm; 6,5x55 / 220 mm; 7,5x55 / 270 mm; .308 Win./280-305 mm, depending on the type of bullet. Special attention should be paid to the locking system developed by the Blaser company. For unlocking and locking, the bolt does not need to be turned, which allows achieving a high practical rate of fire and not changing positions (and not losing a target) even to inexperienced shooters. The reloading of the rifle is carried out easily and silently by longitudinal movement of the bolt at its handle. The hammering of the firing pin occurs when the slide is moved on the shutter shank and does not require significant effort, and a large red dot opens, signaling that the weapon is ready to fire. When the slider moves, the spring rod moves forward and compresses it. In the cocked state, the firing pin is locked with a lever. To remove a weapon from a combat platoon, press the slider head down and move it back. To remove the bolt, you need to transfer it to the open state, press the head of the protruding rod on the right side of the receiver and remove it with the movement of the handle. The trigger mechanism is a separate unit is a lever system that allows you to adjust the effort on the trigger.

Svobnovyveshenny barrel does not rely on the forearm and is fixed in the receiver at two points, which increases the accuracy of shooting. The design of the weapon allows you to freely replace the barrel without subsequent shooting. At the same time, it is necessary to simultaneously replace the bolt head, which is attached to the interchangeable barrel. The high stability, accuracy and dependability of the sports model Blaser R93 LRS attracted the attention of law enforcement officials who took it into service, with minor changes. This rifle was named Blaser R93 CISM / Tactical and is available for ammunition: .243 Win .; 6 mm NORMA BR; 7,5x55 (GR 11), but the main patron used by the police is .308 Win. (7,62x51). In accordance with the requirements of the CISM, the magazine of the rifle is separated only by simultaneously pressing the two buttons of the latch located on the sides of the polymer box.

Subsequently, based on the Blaser R93 LRS-2 rifle (differs from the previous model with an improved fully polymeric bed), at the request of the special forces, a model was created under the .338, with an extended box for the long cartridge and with an enlarged barrel, called the Blaser R93 Tactical-2. The difference between the LRS-2 and Tactical-2 in the loadout of the receiver. On the LRS-2 fit standard trunks from R93. On Tactical-2, the barrels are in the cartridge chamber with a diameter of 34-mm, and in the R93 29-mm (the differences are due to the use of the .338 on the Tactical-2 rifle). On the Blaser R93 Tactical-2, the Picatinni / Weaver bar comes standard and the barrel brake thread is on the barrel, plus additional threaded holes on the box for installing additional bars. The branded "Blazer" arm provides operative detachment and attachment of the sight with guaranteed preservation of the position of the optical axis. 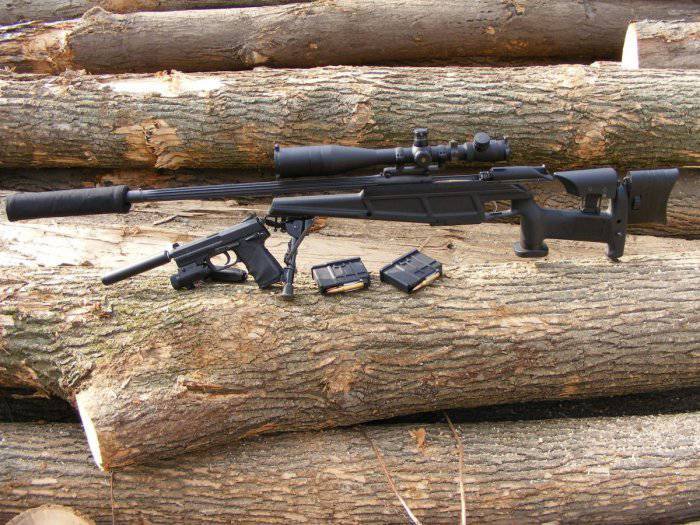 All Blaser R93 models (LRS / LRS-2 / Tactical / Tactical-2) can be easily disassembled into basic units for maintenance and transportation (in this case, the receiver / receiver is not removable). With the use of selected ammunition, all models show the accuracy of no more than 0.5 MOA.

The advantages of Blaser R93 LRS-2 / Blaser R93 Tactical-2 include the following points:
- Branded Blazer shutter with a direct stroke provides a high practical rate of fire.
- Thanks to the interchangeable barrel, depending on the situation, you can use standard cartridges or cartridges of increased power class "magnum".
- Changing the trunk takes no more than 30 seconds.
- Adjustable polymer bed, effort and stroke trigger provides an easy adjustment to the arrow.

The Blaser R93 Tactical-2 sniper rifle was adopted by the special forces of Germany, Australia, Iceland, Malaysia, the Netherlands, Slovenia, Ukraine, and the Blaser R93 LRS-2 sports rifle is offered on the civilian arms market.

Ctrl Enter
Noticed oshЫbku Highlight text and press. Ctrl + Enter
We are
Trilinek and all its familyTank "Panther"
Military Reviewin Yandex News
Military Reviewin Google News
17 comments
Information
Dear reader, to leave comments on the publication, you must to register.