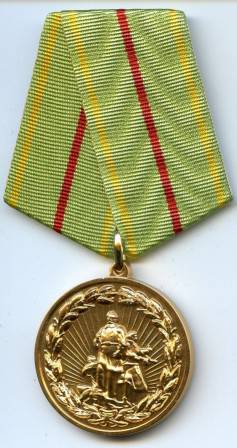 On the land of the order-bearing Bryansk region scandal. Faster than lightning, residents spread the news that "on the instructions of the governor of Denin," a local United Russia deputy, Malashenko, presented a group of deputies and State Duma staff members with a commemorative medal "In Honor of the Partisans and Underground Workers". It happened on June 29 - on the Day of partisans and underground fighters, installed at the state level two years ago.


High awards, in particular, were honored by the first deputy. Speaker Morozov, just a deputy - former speed skater S. Zhurov, plenipotentiary of the president in the lower house of Minh, the same plenipotentiary of the government Loginov. It is especially emphasized that the medal was awarded to Deputy Kobzon, whom the generous governor specifically congratulated him on the phone by phone ...
So you understand? Those who were not still alive in the Great Patriotic War were, first of all, honoring this favorite of the Kremlin, not the liberator heroes, not partisans and members of the underground, whose feat is immortal. And Moscow high-ranking officials, who absolutely have nothing to do with the fighters against Nazi fascism. Years did not come out ...

Let me remind you that in the years of the Great Patriotic War, 139 guerrilla groups united in 27 brigades operated in the Bryansk forests. In them for the freedom and independence of the country fought over 60 thousands of fighters who represented a very formidable force. Suffice it to say that under their control were entire villages where the Soviet power was preserved and where the nazis did not dare to turn up. During the years of occupation, the guerrillas destroyed over 100 thousand fascist soldiers and officers. Many were awarded the title Hero of the Soviet Union, more than 15 thousands - orders and medals. Many did not live up to the bright Victory Day ...

But Mr. Denin remembered not about them that day. He thought how to bend over in front of the officials close to the president and the prime minister.

Another thing is surprising: why did the medal not embarrass the “award winners”? Why no one refused? If you believe the press release, everyone considered their involvement in the glory of others as a matter of course. "They expressed their gratitude to the leadership of Bryansk ...".

You know, I somehow have a bad idea of ​​this picture. I can’t imagine how and where Mr. Malashenko could gather such a motley public and arrange an award ceremony. Who are they - and who is he? Most likely, he made an appointment, ran around the cabinets, gave out boxes and smiled flatteringly, or even transferred the reward through assistants and secretaries ...

It is noteworthy that the attempts of journalists of central newspapers to find out, in the governor’s entourage, what the two envoys, deputies and apparatchiks of the State Duma deserved, won the guerrilla medal and were not crowned with success.

Spit these days, residents of Bryansk. Call in the editorial offices of newspapers and news agencies. One of the veterans of the Great Patriotic War said to the correspondent of the Internet newspaper BRYANSK.RU, asking not to be named: “This parasite trades with conscience, hanging military medals on anyone. We fought and suffered such deprivations not for the fool to appease someone with this. Damn him! ”

I was told that this is not the first loyal trick of Mr. Denin. Last year, he awarded the partisan medal to the head of Udmurtia Volkov, trainers of Zapashny brothers, and also skaters Averbukh and Navka. These are somersaults.

From the Regulations on the procedure for awarding a commemorative medal "In Honor of the Partisans and the Underground Workers":

- veterans of the Great Patriotic War who took direct part in hostilities in the territory of the Bryansk region;

- Heroes of the Soviet Union, Heroes of the Russian Federation, full gentlemen of the Order of Glory, born or residing in the Bryansk region;

- members of the partisan movement and underground fighters;
Russian citizens and foreign citizens who have made a significant contribution to the Victory in the Great Patriotic War, patriotic education of the population, mass defense and search work, perpetuation of the memory of the Victory of the Soviet people in the Great Patriotic War 1941 - 1945 and military actions of Soviet soldiers and partisans on the Bryansk the earth.

It is useful to remind that the laureates of the award automatically receive the status of a veteran of the Bryansk region and benefits. In particular, the money for the "travel card" and 50-percent discount on housing payments and "communal".

The thief on the throne

Well, the Bryansk governor Denin is an odious person, even among his fellow members of United Russia. He was an inconspicuous director of the “Snowball” poultry farm. But suddenly, it would seem, all of a sudden in the 2004 year, the Kremlin made a bet on it. For the sake of his favorite in the gubernatorial elections, he withdrew from the distance the acting governor Yuri Lodkin. When trying to appeal against an illegal and unsubstantiated verdict of a local Themis in the Supreme Court of the Russian Federation, they hinted to him on the sidelines: “Well, you understand everything ...”.

His “election”, and in fact - the appointment of the newly-made owner of the region, decided to celebrate with a banquet in the circle of the United Russia Duma, in whose ranks he had been before. Launched in the evening 18 January in Moscow in his jeep, he near Obninsk to death killed a resident of the city Natalia Lagoda, leaving orphans her two daughters.

During the Second Chechen War, escaping from bullets and shells, she and her children escaped from Grozny to peaceful Obninsk. But she found death under the wheels of the Deninsky “armored car”. The regional prosecutor's office presented the case as if the poor thing jumped out onto the road in the wrong place, and the high-ranking rider was not able to slow down ... In general, she was to blame. Bryansk observers didn’t wait for another decision: after all, at that time, Mr. Denin was the head of the local United Russia. And we have it above the law.

He did not tell the Bryans anything about this murderous IF, and, as if nothing had happened, he began to lead the edge of partisan glory. And so led ... From scandal to scandal.

Soon, the prosecutor's office opened a criminal case against him on the fact of manipulations with the shares of “Snowballs”, with which he, as the owner, did not want to part. The case was transferred for investigation into the neighboring Oryol region, and there it died down.

In 2009, another Denin's ally was taken into custody - Vice-Governor Simonenko. According to the investigation, with his participation, state lands and real estate, the value of which exceeds 140 million rubles, miraculously passed over to 9 million rubles. under the control of private JSC "Snowball". It is noteworthy that its formal owners were ... Denina's daughter and his wife's sister. He himself appears in the case file as a witness.

And at the beginning of the year, the scandalous collusion of this gentleman with representatives of the Ural commercial grouping became public. Under the "agreement" - the signature of "businessmen" from the Sverdlovsk region Kostarev, Isakov and Viharev.

The merchants pledged to allocate 60 million rubles to the pretender for the governor’s post to Denin for the election campaign with the immediate transfer of 10% of this amount to them. And if he wins, he undertakes to break through the nomination of Kostarev and Isaikin to the Federation Council. Vikhareva appoint either their deputy or assistant. "The terms of this agreement are confidential and are not subject to disclosure," - noted in the "contract", which is crowned with the signatures of all the contracting parties.

The media noted that Kostarev is a well-known personality of the MIA operatives. According to their data, he is the leader of the organized criminal community Uralmash, several years ago he was put on the international wanted list on charges of raider seizures of large factories.

Of the three businessmen, only Vikharev received the promised chairs. After the "election" Denin made him his assistant. However, in 2008, he was detained by FSB officers while receiving a bribe to 2,3 million rubles. As a result, the "helpers" were sentenced to four years in a colony, and from the Kremlin's favorite, it was water all the way from a goose. He has nothing to do with ...

At the beginning of the year - a new scandal. According to Mr. Denin’s published declaration for 2010, he and his wife, in addition to two houses, three land plots and one car, turned out to be the owner of land shares on 5440 ha. Costing almost one hundred million rubles. At the same time, in the declaration for 2009, his family had significantly less land ownership - only 117 ha. Where, as they say, droves? There is no clear answer. One can only guess. So today the Bryansk governor is Russia's largest latifundist.

Now it’s clear why the master of guerrilla fame edge all the time needs support from the federal center? Hence, apparently, the satisfaction with the medals close to the "tandem" of senior government officials. Perhaps they put in a good word.

But with what hope during the last years the Councils of veterans of the Bryansk region, front-line soldiers, the public sought to establish a holiday of partisans at the state level!

But in a nightmare, they could not imagine that the sacred reward would become in the hands of Mr. Denin a means of fawning and a kind of bribe. Distributing it to the "right people" right and left, he vulgarizes the feat not only of the partisans, but of the entire Soviet people, the defenders of the Fatherland and the liberators of Europe from the brown plague.

We are in Yandex Zen
What you didn't want to know about England
One metal is poured - a medal for battle, a medal for labor
2 comments
Information
Dear reader, to leave comments on the publication, you must to register.