July 8 2011
14
Sooner or later, but there will come times when robots will take an active part in wars. But not invincible fantastic land "terminators", but floating all-seeing machines capable of delivering a powerful blow "from where they did not expect" at a crucial moment. In order to assess the reality of this perspective, it is enough to familiarize yourself with the dynamics of the use of unmanned aerial vehicles (UAVs) by armies of especially developed countries. 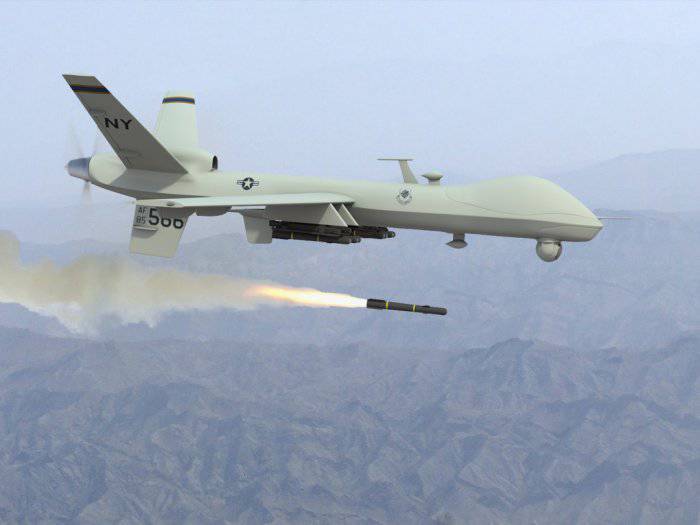 The current model range of unmanned, or, as they are called, “air ghosts” is extremely diverse: from multi-ton vehicles capable of delivering high-precision rocket-bombing attacks on enemy positions, to tiny “dragonflies” agents that can fly into the slightly open window leaf and transmit various visual information over fairly long distances and, most importantly, in real time. Most UAVs also have civilian use: they keep order, they are pursuing bandits, they find missing expeditions in hard-to-reach places and forest fires. The cost of one UAV ranges from tens to several hundred thousand dollars.

And in terms of the performance of various tasks in relation to costs, drones are much superior to ordinary Aviation. For example, the performance of overseas UAV strike drums over the past years could be estimated by the residents of Pakistan and Afghanistan, where in the heat of the fight against the Taliban overseas air robots repeatedly attacked civilian targets. In 2010, U.S. Air Force drones carried out over 110 missile strikes in northwest Pakistan. An increase in the number of such attacks occurs despite protests by official Islamabad, which the US calls these acts of impudent violation of its sovereignty and regional integrity. But, despite the protests, Pakistan intends to "join" itself with the unmanned armsin particular, the US will sell him 85 lightweight UAV models - the Raven.

Not long ago, drones were made only in the United States and Israel, but now their monopoly in this area has been destroyed. China, which made its 1 th drone five years ago, in November 2010 presented the 25 types of extremely advanced UAVs at the time of the international air show in Zhuhai. Among them were several drums with the ability to fire rockets at targets on the surface, and one was equipped with a motor from a fighter, which ultimately makes it the fastest drone in the world.

Confirmation of the creation of the fastest drone in China came from the Japanese military. A Japanese patrol aircraft was able to photograph an unmanned unit near a group of Chinese ships returning from the training ground. According to information provided by the Ministry of Defense of Japan, 22 destroyer 23 and 3, 4 frigate and 4 auxiliary ships of the PRC Navy passed through a strip of neutral waters between the Japanese islands of Miyakojima and Okinawa. They were returning from field training shooting conducted in the first days of the month.

In one of the provided photographs taken by aerial reconnaissance of the Japanese Navy, an unmanned aerial vehicle (UAV) with a length of several meters is visible. In appearance, it resembles the outdated trans-Ocean naval UAV class RQ-2 Pioneer.

Apparently, the Chinese drone was lifted into the air from the helicopter deck of one of the huge ships, however, similar units in the US are incapable of this. The main purpose of the drone may be target designation based on intelligence for long-range ship-borne missiles and guns, analysts suggest. From the fact that China does not have an extensive network of high-precision space satellites, cruise robots may well provide invaluable support in the performance of combat missions at sea.

From the fact that this is the first documented proof of the existence of Chinese UAVs, one should expect comments from the authorities of the People’s Liberation Army of China. In any case, the test of a sea drone, along with a demonstration of the 5 generation fighter J-20 and the conclusion of the improvement of the aircraft carrier Shi Lang (formerly Varyag), acquired from Ukraine in 1998, speaks about the vigorous buildup of military power of this state.

The successes of China stirred up, first of all, the neighboring Asian powers. For example, India announced in the spring of 2011 of the year that it was working to create its own combat UAV, capable of delivering bombing and rocket attacks. Indian unmanned vehicles will weigh up to 15 tons and will be able to climb to a height of more than 9 kilometers. Own drone develops and the army of South Korea. The Korean Air Aerospace Department should already supply 2014 ground forces with KUS-30 drones, which can climb 9 kilometers, by air, up to 4 hours, and transmit real-time data to 6 kilometers by 60 by year. Turkey announced its intention to begin production of its own Karayel UAV with a carrying capacity of just under 70 kg and a flight duration of about 20 hours.

However, the world leaders in the creation and construction of UAVs remain the United States and Israel. Say, the state-owned company Israel Aerospace Industries, shortly before the beginning of summer, presented to the competent public a completely new development - the unmanned tiltrotor in the world called the Panther, the 1 in the world, which simultaneously combines the qualities of a helicopter and an airplane. Thanks to the turning screws, it can take off and land vertically, fly like a plane, and hang in the air. The weight of the combat vehicle is 650 kg, the flight duration reaches 6 hours, the range is 60 kilometers, the height is 3 kilometers. The new drone is equipped with an all-weather tracking system and a laser target designator.

For the armament of the Israeli army, Israel Aerospace Industries will soon supply modern Heron UAVs, which by their technical characteristics surpass all the known and existing analogues today. This drone can perform combat and reconnaissance tasks regardless of weather conditions and time of day, remain in the air for 2-s days without refueling, rise to a height greater than 10 km and carry the necessary payload in 250 kg with its own weight in 1200 kg.

But it is abroad. The situation with unmanned aerial vehicles in Russia is completely different. Over the past two years, the Ministry of Defense of the Russian Federation has not transferred a single ruble to its own domestic manufacturers and developers of unmanned aerial vehicles. This situation developed after the first batches of UAVs were purchased by agreement with Israel.

The development of domestic drone company is engaged in "Vega", and it does not receive money because of the excessively long defense review of the equipment provided by the Israelis. Unknown source RIA News He suggested that the similar delay was caused by the uncertainty of the officials of the Ministry of Defense of the Russian Federation, who are not sure in the future direction of the formation of this branch. They can not definitively decide whether to continue to buy drones abroad or develop their own production.

In recent years, representatives of the Ministry of Defense of the Russian Federation have concluded a number of agreements to receive several battalion of UAVs from Israel. And in October, 2010, the general director of Israel Aerospace Industries, Yitzhak Nisan, signed a contract with representatives of the state company Rosoboronprom for the delivery of the first lots of unmanned aerial vehicles in the amount of 400 million dollars. The signing of the contract took place in Jerusalem in the presence of Viktor Khristenko, the head of the Ministry of Industry and Trade of the Russian Federation. Under this agreement, drones are obliged to enter Russia in a dismantled state and assemble at a helicopter plant in Kazan.

Domestic engineers have repeatedly reported that the models they produce are much cheaper than Israeli ones, although a few are “behind” them in terms of the technical quality of electronics. However, according to the statement of the Deputy Minister of Defense of the Russian Federation, Vladimir Popovkin, 5 billion rubles were spent on the development of the corresponding electronic filling by Russian manufacturers, but unfortunately, it cannot be compared to the equipment supplied by an Israeli company in any of the parameters.

Meanwhile, truly unique iron birds are being developed in the United States. For example, a UAV capable of tracking and patrolling at enormous heights in an independent mode without stopping for five years. The contract for the development and demonstration of an experimental example of such a unit under the code name "Grief" (Vulture) was concluded by the Pentagon with the company Boeing. In addition, launched mass production of the world's smallest unmanned reconnaissance aircraft. An airplane with a wingspan of 16 centimeters and a weight of 19 grams can easily and virtually silently fly into the open window. He, like a hummingbird, is able to vertically fly up and hover in the air, as he is able to reach speeds of more than 100 km / h. This mini reconnaissance, possessing the ability to "see" in complete darkness, will be used in secret hidden operations of the overseas army: fly in, shoot, eavesdrop and hide unnoticed.

However, even miniature UAVs will soon become unsafe. Thus, the overseas company Raytheon is actively working to create a "wise bomb" weighing just 6 a kilogram, which can easily arm a small reconnaissance drone. Having found the target, he will be able to launch this projectile, controlled by GPS, from a four-kilometer height. And as a goal can be a separate car or a group of people.

We are in Yandex Zen
Combat use of unmanned aerial vehicles
An-12 in Afghanistan
14 comments
Information
Dear reader, to leave comments on the publication, you must to register.