July 8 2011
2
In 1972, the command of the Indian Army determined the requirements for a new main combat tank, which was planned to be adopted by the army. By this time, the Indian industry already had experience in licensing the assembly of the English Vickers Mk1 tank (Vijayant) and the Soviet T-72M tank. The final decision to create the tank was made in 1974. It was assumed that the tank will be developed by Indian designers and will be 100% composed of units, components and assemblies manufactured in India. The tank project was called MVT-80 (Main Battle Tank of the 80-ies - the main battle tank of the 80s). So began история the creation of the first Indian tank, stretching over many decades.


India spent a huge amount of time and money on creating its first MBT. Only in 1984, the creation of the first prototype of the tank was announced, in 1985, the first demonstration of the finished sample was made. 1988 produced a small test batch of machines for extensive testing. The decision to start the production of tanks by the government of the country was made only in 1996 year, in the same year the tank received its name "Arjun". To establish the production of tanks was planned at the tank factory in Avadi. The first industrial party was planned to be released in the course of 5 years and, in the course of operation, to identify all the shortcomings requiring further remediation.

Apparently, these troop tests did not turn out to be good for the machine, since mass production was started only in 2006 year, and the first tanks in service with the Indian army entered the 2007. Their initial plans to build 2000 Arjun tanks in India had already been abandoned, leaving only the initial order for the 124 tank unchanged. Last but not least, the purchase of T-90С tanks from Russia, which by price and reliability surpass the modern Indian tank, played a role. So the price of Arjun from the planned 1,6 million dollars in 1980-s has already managed to grow by half and today the price of 1 tank is at the level of 3,3 million dollars, which is almost twice as much as the value of export T-90. 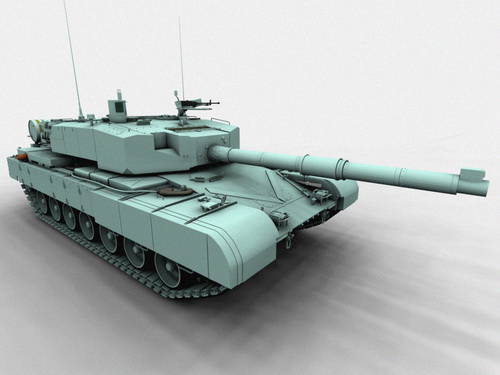 It should be noted that the creation of the main battle tank itself is a big breakthrough for the Indian tank industry, but the goals set for it were not fulfilled. So in particular, the localization of the tank is currently about 60%. The tank, apparently, will not become the MBT of India, its fate remains vague. In this case, the development of the Arjun Mc2 model has already begun, the first tests of which are planned for 2011 year, and the mass production of the machine is planned to begin in 2014. The main work is to bring the tank localization from 60 to 90% Primarily due to the use of the engine and transmission of local production, as well as enhancing the firepower of the tank, through the use of modern high-tech developments. The tank will have to get an improved SLA, as well as the ability to launch anti-tank missiles through the barrel of the gun.

Tank Arjun has a classic layout. The control compartment is located in the front of the tank, the driver's seat is shifted to the right. Behind the department of command, there is a fighting compartment in which the remaining members of the crew of the 3 are located (the crew of the human 4 tank, there is no automatic loader in the tank). The tank commander and gunner are placed in the turret to the right of the gun, the loader is on the left. In the stern of the tank is the engine compartment. In terms of its external design, the tank resembles the German Leopard-2 and the Japanese Type-90 tank.

The body armor of the nose of the case is combined, with a sufficiently large angle of inclination of the upper frontal part. The sides of the tank hull are protected by anti-cumulative screens, their front part is made of armor material, the rest of the tank sides are covered with rubber screens. The forehead of the tank turret is inclined relative to its stern, the sides of the turret are vertical. At the stern of the tower, blocks of smoke grenade launchers are mounted. The tank is equipped with a high-speed fire extinguishing system and protection from weapons mass destruction. The fire detection system is guided by information received from infrared sensors - the response time is 200 ms. in the crew compartment and 15 with. in the engine compartment.

The turret and hull of the tank are welded using “khan” armor made in India, which is probably one of the chobhem armor variants used on Western tanks. When designing the tank, Indian engineers took into account the anthropometric data of Indian soldiers, which allowed them to optimally place various instrumentation and controls of the tank. 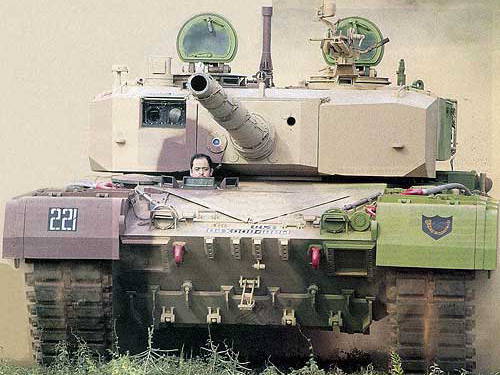 The main armament of the tank is 120-mm rifled gun, stabilized in two planes. The gun is equipped with a heat-insulating casing and an ejector. Shooting from the guns is carried out by separate loading shots with cumulative, armor-piercing sub-caliber, armor-piercing high-explosive and high-explosive fragmentation projectiles. Electro-hydraulic drives are used to implement the guidance of the gun and rotate the tank turret, allowing to achieve high speed and accuracy of aiming. The loading of the gun is done manually, which partially explains the rather low rate of fire - up to 6 shots per minute. Tank guns have maximum elevation and declination angles ranging from + 20 to -9 degrees.

The 7,62-mm machine gun is paired with the gun, another 12,7-mm machine gun is mounted on the roof of the tower, at the loader's hatch, and is used as an anti-aircraft gun. The tank is equipped with an automated joint OMS, the main element of which is the on-board computer produced by the Spanish company ENOSA. This computer automatically takes into account the value of indicators such as wind speed and direction, air temperature and pressure, charge temperature and make the necessary corrections when firing.

A tank gunner has a sight stabilized in all planes with a laser rangefinder and a thermal imager (in common with the commander of the vehicle). The commander observes the battlefield with a stabilized panoramic sight. It is reported that the Arjuna's MSA is able to provide a fairly high accuracy of firing from a gun while moving with a direct hit index at the level of 90%. The ability to control fire in motion and at night is a major step forward for Indian developers. 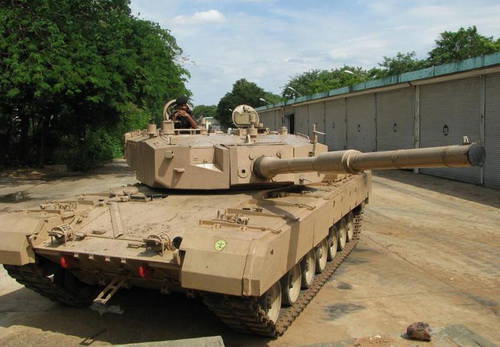 According to the original plans, it was planned to install a gas turbine engine with an 1500 horsepower, but later it was decided to stop at the 12 air-cooled cylinder engine of the same power. As a result, Indian engineers developed a number of engines with a power ranging from 1200 to 1500 hp, but they all did not satisfy the military and required design improvements. As a result, Arjun received a German ten-cylinder V-shaped diesel 838 KA 501 KV manufactured by MTU, which has liquid cooling and turbocharging system. At 2500 r / m, this engine develops power in the 1400 hp, which provides an almost 60-ton car with a decent enough thrust-to-weight ratio - about 24 hp. per ton. 59-ton Arjun is able to develop speed on the highway up to 70 km / h, and cross-country conditions up to 40 km / h.

A hydromechanical transmission is connected to the engine, including a planetary gearbox manufactured by the German company Renk and a torque converter. A power shift transmission has 4 forward gears and 2 reverse gears. Suspension tank hydropneumatic. On each side of the chassis, there are 7 supporting and 4 supporting rollers. Drive wheels - rear. Dual track rollers have external cushioning. The tank caterpillar is steel, equipped with rubber-metal hinges, and rubber pads on the tracks. The hull of the tank and its hydropneumatic suspension are sealed to prevent dust from entering into them and water seepage (when the tank is moving ford or actions in the marshland).

Due to the relatively low ground pressure (0,84 kg / cm2) and sufficient power of the German MBT engine, it has good maneuverability and good maneuverability. The tank is able to overcome a ditch wide up to 2,43 m. And without additional preparation to force a water obstacle to a depth of 1,4 m. The hydropneumatic suspension used on the tank provides the car with good smoothness when driving on rough terrain.

We are in Yandex Zen
Engine T31 Demolition Tank (USA)
Tank "Vikkers Medium" - if you really fight, then with comfort
2 comments
Information
Dear reader, to leave comments on the publication, you must to register.