Former Soviet at the exhibition KADEX-2014 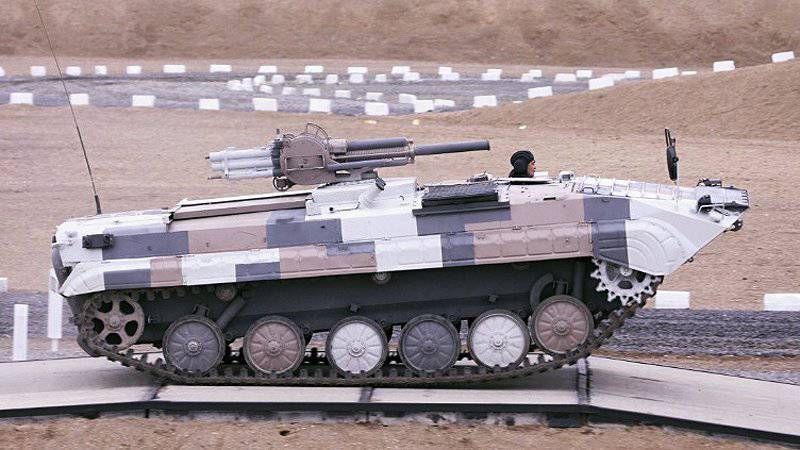 At the KADEX exhibition in the capital of Kazakhstan, Astana, Semey Engineering showed a complex consisting of a new 82-mm mortar conveyor and a transport-loading machine.

The complex is based on two upgraded tracked BMP-1, on one installed 82-mm mortar 2B9M Cornflower, and on the other is a spare ammunition. Cornflower Mortar is an air-cooled version of the original liquid-cooled 2B9 mortar. It is installed in the middle part of the hull, right in front of the crew compartment, consisting of four people, and the compartment for ammunition.

The mortar is serviced manually by an experienced calculation, partially protected by hatches opening to the side; he is able to achieve a rate of fire of 20 - 30 shots per minute. The mortar has the same vertical guidance angles as the original stationary model (from -1 to + 85 degrees); this means that the mortar can hit a target at a distance of 4720 meters when using standard ammunition. The mass of the mortar has not changed and is 632 kg.

Her transport-loading vehicle has a reworked open cargo platform in the stern of the machine with a solid folding ramp and a crane at the site of the mortar. 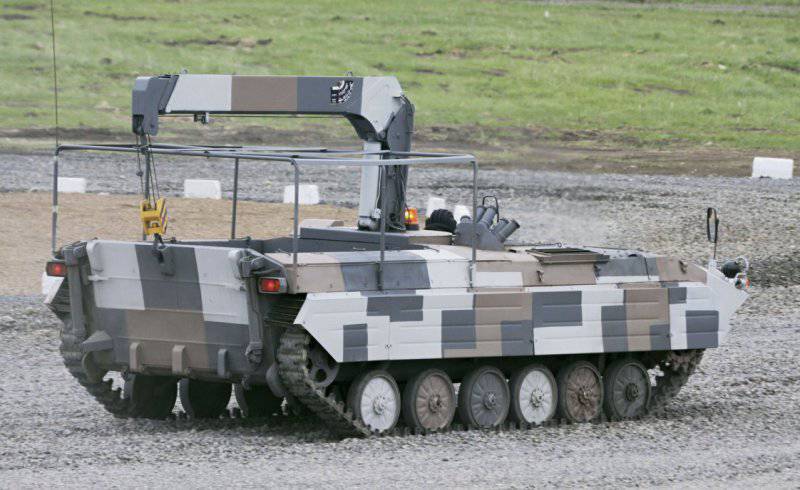 The exhibition in Kazakhstan shows a new reconnaissance vehicle. 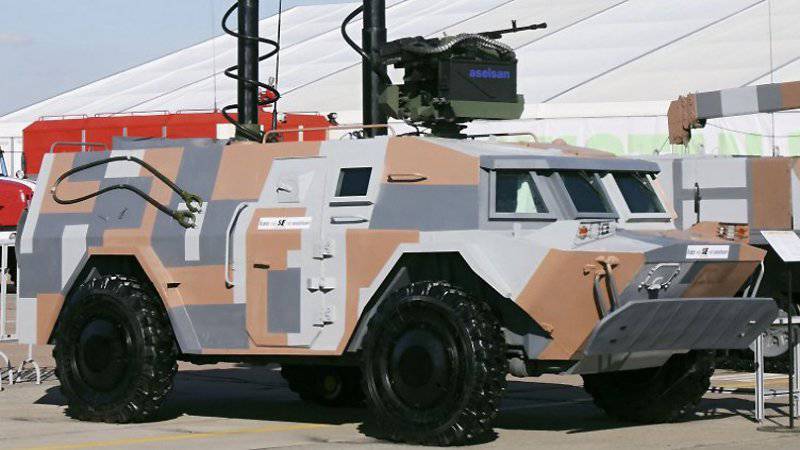 It is clear that the BRDM-KZ is based on the BRDM-2 chassis, but the new car is easily recognizable by the altered front end and the wider track.

At the KADEX 2014 arms exhibition, Kazakhstan Engineering presented for the first time a prototype machine based on the BRDM-2, which was designated the BRDM-KZ. The machine is designed based on the needs of the Kazakh armed forces in the new light armored reconnaissance vehicle.

The machine was developed by Kazakhstan enterprises Semey Engineering and Kazakhstan Aselsan Engineering (responsible for the integration of sensors and remotely controlled combat module). The companies have been working on the project since December 2013 (a cooperation agreement was signed a month earlier), and the exhibition announced the testing of this prototype scheduled for July 2014.

The body of the car was significantly improved in order to obtain a larger internal space for the crew, in addition, a new armor was installed on the front inclined sheet, new side doors and a new engine with high combustion capacity. Under the installation of the new engine, Semey Engineering has finalized the layout of the rear of the case. There was installed an Iveco diesel engine with a power of 111 kW (149 hp), compatible with EURO IV and connected to a manual gearbox (six speeds forward and one back), replacing the outdated GAZ-41 gasoline engine on the BRDM-2.

The car retained its amphibious qualities, but the existing central water cannon was replaced by two smaller water cannons, which improved handling during fusion.

The mobility of the machine was improved by removing two pairs of additional pneumatic rollers (two on each side) located in the center of the machine, and installing original semi-elliptical springs with torsion shafts and hydraulic shock absorbers. Bridges were taken from the BTR-80 in order to expand the gauge of the new car. 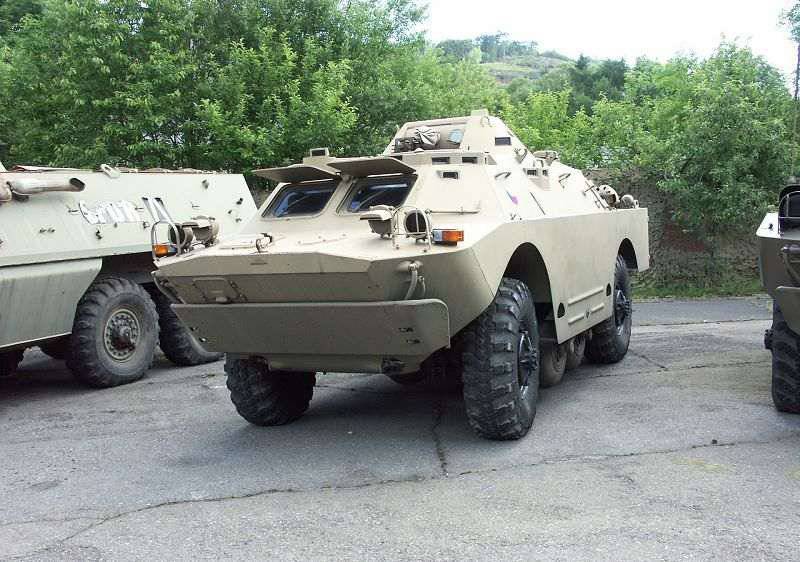 In the photo at the BRDM-2, two additional pneumatic rollers are clearly visible.

The BRDM-KZ has a 5,75 meter length and an 2,9 meter width, which is significantly larger than the original BRDM-2 with its 2,35 meter width. The combat weight of the machine is 7-8 tons, depending on the configuration. The new engine allows you to reach a maximum speed of 110 km / h and have a power reserve of up to 1300 km, which significantly exceeds the cruising range of 750 km from the BRDM-2.

The reconnaissance vehicle complex consists of the PSN panoramic survey kit and the Falconeye surveillance system on one telescopic mast and the ACAR radar on the second mast. PSN has 12 modules, each contains one thermal and one daytime camera, so four groups of three cameras each provide a full coverage 360 degree. 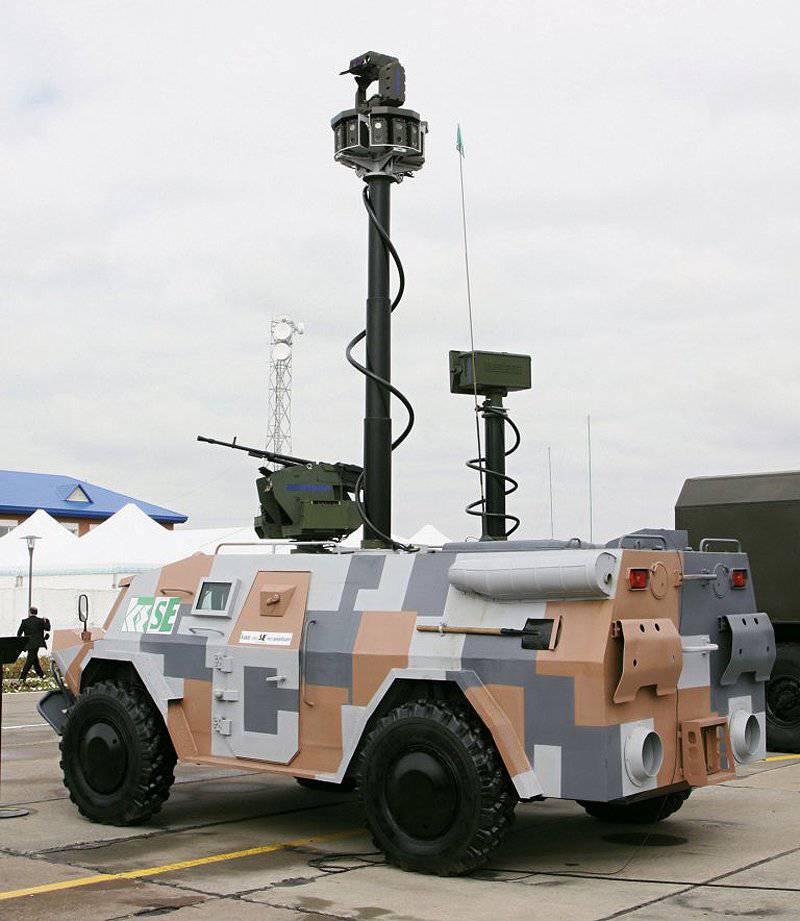 If you look at the BRDM-KZ car at the back, you will see a converted configuration with two water cannons, an ACAR radar and a PSN / Falconeye optic-electronic kit on extended telescopic masts

The Falconeye system also has a thermal imaging and daytime camera, plus a laser range finder and a GPS antenna; All this is installed at the top of the mast on a pan-tilt head, providing a panoramic view. The task of Falconeye is to identify individual objects seen by the PSN system. The thermal imaging camera operates in the 3-5 micron range, the matrix of the camera is 640x512 pixels and has a double electronic zoom, the camera can switch between the wide 25x20 field of view and the narrow 2X1,6 field of view.

Aselsan is also developing a long-wave version of a thermal imaging camera operating in the 8-12 micron range. This option will have a wide field of view 10,3x8,3 and a narrow field of view 3,7x3.

The daytime camera has an x12 magnification, and the laser rangefinder uses an eye-safe laser source with a 1,54 micron long wavelength.

Survey radar ACAR operates in the Ku-band mode with a low probability of interception of signals. The radar performs "advanced" signal processing, it can track targets in scan mode, and also simultaneously track multiple targets. The radar has a maximum range of 40 km, and a person can be detected at a distance of up to 12 km. The scan area can be narrowed from 360 to 10 degrees, while the vertical angles are ± 24 degrees.

The armament is mainly of a defensive plan; at the KADEX show, a DUBM-12.7 with tank machine gun NSVT 12,7 mm caliber. The module rotates 360 degrees, elevation angles range from -10 to +60 degrees; An ammunition of 400 rounds ready for firing is located in the hull. The machine gun is aimed at the target using the ATS-40/60 thermal imaging sight.

Minor changes in the appearance of the BRDM-2 allow, however, to immediately identify the new car on the converted front end with new panels of armor glass and new headlights.

According to the materials of the site www.janes.com

Ctrl Enter
Noticed oshЫbku Highlight text and press. Ctrl + Enter
We are
Fire power for all occasions. Overview of combat modules and towers for cars of light and medium weight categories (4 part from 5)Technique "Uralvagonzavod" at the exhibition KADEX-2014
Military Reviewin Yandex News
Military Reviewin Google News
33 comments
Information
Dear reader, to leave comments on the publication, you must sign in.