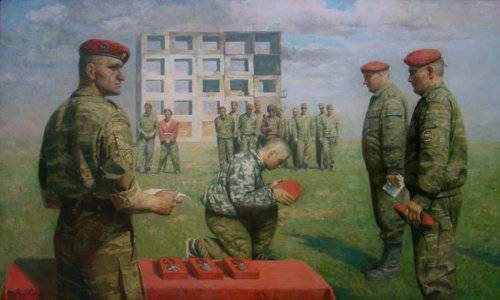 The film tells about stories the creation of "special forces" of Russia. On the goals and objectives of the "Naval Special Forces". You will see the secret techniques of training and special sabotage training of this particular unit, which, according to experts, is the most effective in the world. The documentary chronicle impartially captured the participation of an elite unit in special operations in: Hungary, Czechoslovakia, Africa, Central America, Afghanistan, and sosame on the territory of the former USSR.

(flameusmc)
Pendosy were filmed, there are places where the stick is clearly bent, but as far as this is not true (I’m talking about a potential opponent - the film stubbornly speaks of an invasion, for example, in England). And once again it was taken by the Americans with their characteristic point of view, so this film should be considered as one of the points of view, in my opinion.

(ToJIcTbIu)
The film is a cheap propaganda mess designed for the dumb western man in the street. In fact, very little is said about SpetsNaz troops themselves, and only well-known things (for example: about the seizure of an airport in Czechoslovakia). Nothing is clear about Hungary at all, it seems that the authors of the film had no information about this. There is complete laughter about Africa and Latin America - no data on HF, only footage with masses of corpses. For some reason, they dragged Iran. The main emphasis on the aggressiveness of the USSR and the "adequate answers" of the West. With Afghanistan, in general, complete nonsense, although Afghanistan is the golden pages of the history of the SN (take, for example, Javaru or Karera). To what the Soviet SN was doing in Afghanistan, in my opinion, there are no analogues. And the authors are nudging about some mythical "borrowing of the Vietnamese experience from the" green berets "." And the final phrase that "SpetsNaz’s training level, in general, can be compared with the level of training of SAS and" green berets "(these comrades in Iraq often found SCAD missiles ONLY AT THE TIME OF THEIR STARTING, but periodically pointed Aviation to your infantry and Tanks) nothing but laughter caused.
Generally, kinoshka at the level of kindergarten. By captivity, Zadornov is remembered: "Well, stupid sons!"
Ctrl Enter
Noticed oshЫbku Highlight text and press. Ctrl + Enter
Military Reviewin Yandex News
Military Reviewin Yandex Zen
2 comments
Ad