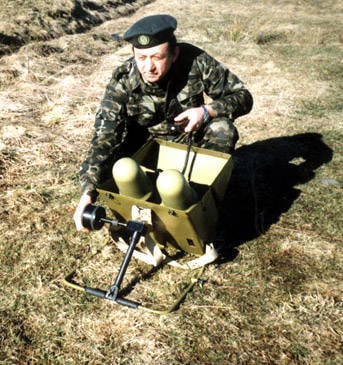 Confronting the police and large groups of street demonstrators and fans are often mentioned in the list of the most important events of police reports all over the world. According to analysts, repelling attacks by aggressive groups of hooligans are suppressed by police units with great effort and not always successfully.

Examples of such "hostilities" may be the events that took place in Israel and some countries in Africa and Asia. All the same analysts say that the number of such group anti-government confrontations in the modern world will increase.

One of their options for non-lethal police to counter the demonstration groups is the Koba non-lethal complex developed by the Ukrainian enterprise VALAR (Ivano-Frankivsk) in 2001. The complex is designed to combat anti-government demonstrators by covering a group of demonstrators with a high-strength mesh and simultaneous treatment with tear gases at distances up to 200 meters. Prolonged operation revealed some operational deficiencies of the product, which became the basis for modernization.

The new tactical task of the modernized complex was to ensure non-lethal impact on the groups of an aggressive enemy on long-distance approaches to contact with the police forces.

The term “long-distance approaches” in this concept means the distance 100-200 meters in the conditions of settlements. At such a distance, a very aggressive “enemy” cannot use the available means of attacking police forces (stones, sticks, incendiary bottles, tear gas, etc.). In addition, at such a distance, the enemy is still in compact groups and it is possible to predict their movement in the cramped conditions of city streets.

The sudden covering of the group with a solid net is a powerful psychological factor and changes the psychology of the behavior of the violator. Experience has shown that a group of offenders, after being covered with a net, experience psychological shock and a kind of stupor (numbness). It is especially important that the high-strength mesh, which entangles the enemy, is simply impossible to break with your hands. You should pay attention to the presence of a possible additional factor - fumigating with tear gas. Studies have shown that the new technique is very effective in suppressing groups of aggressive violators in urban environments.

With further events after the use of the whole arsenal of the KOBA product, other means of counteraction can be used, used in contact melee battles at distances up to 50 meters.

To carry out the modernization of the product were carried out comparative tests. During the comparative tests, other products with similar characteristics were tested, which ensure that the enemy's manpower group is covered at distances to 150-200 meters with a high-strength mesh with dimensions around 8 and 8 meters. This grid provides the overlap of the entire width of the roadway in the village. Particular attention was paid to the quiet use of this type of weapons to prevent premature response to violators. When testing used various types of ammunition non-lethal impact on the enemy.

Joint tests in parallel with the product "COBA-2M" were products "GORGAN", "GORN" and others. The new product was named "COBA-2MO" (stands for Konteyner Bazovy, 2-double-barreled, Upgraded, Lightweight).

The new product "COBA-2MO" is significantly different from the initial version. The dimensions of the product are somewhat reduced. The weight of the product has been reduced to 14 kg, the charging system and the shot control system have been changed. Made design changes for the possible installation of several blocks of products on vehicles or on armored personnel carriers.

The design replaced the electrical ignition system for a shot on the mechanical design with self-coil. The design of the aiming device and the installation of a range has been simplified; a satchel for carrying ammunition has been created. As for the "KOBA" non-lethal ammunition, they are structurally simplified and lightened, the size has been reduced, the effectiveness of "combat influence on the enemy's manpower" has been improved.

After making all the design changes, in fact, a new generation product will be received, which will be comprehensively tested in conditions as close as possible to the combat ones.

We are in Yandex Zen
Special grenade launchers and launchers of non-lethal impact
Special non-lethal effects
8 comments
Information
Dear reader, to leave comments on the publication, you must to register.