Official briefing of the Ministry of Defense

Dear representatives of the media!

In connection with the crash of 17 on July of the passenger plane Boeing-777 of the airline Malaysian Airlines, which followed the international air route Amsterdam - Kuala Lumpur, a large amount of conflicting information has recently appeared. Therefore, the Ministry of Defense of Russia considered it necessary to present the data of objective control available to the General Staff of the Armed Forces of the Russian Federation.

The diagram shows the international route on which the Boeing 777 was supposed to fly. Please note that before Donetsk the plane followed the established corridor, and then it deviated from the route to the north. The maximum distance from the left border of the corridor was 14 km.

In the future, there is a maneuver to return the "Boeing-777" to the limits of the established air corridor. The Malaysian crew did not have time to finish the maneuver. With 17.20, a steady drop in the speed of the aircraft was recorded, and in 17.23 - the disappearance of the aircraft’s mark from the screens of Russian radars. What caused the departure of the route — the crew’s navigational error or the execution of commands by the Ukrainian air traffic controller in Dnepropetrovsk — can only be answered after decoding the flight recorders, called “black boxes,” and negotiating dispatch services.

According to our data, on the day of the collapse of the Malaysian Boeing-777, the anti-aircraft defense group of the Ukrainian armed forces near the city of Donetsk consisted of three or four anti-aircraft missile battalions of the Buk-M1 complex.

These complexes are capable of hitting targets at a distance of up to 35 km and at altitudes up to 22 km. Why and against whom did the Ukrainian security forces deploy such a powerful air defense group near Donetsk? After all, as you know, the militia has no aircraft.

The diagram shows that the flight route, as well as the expected location of the Boeing's defeat, fall within the range of the Buk-MXNUM air defense system of the Ukrainian armed forces.

We have satellite images of individual locations of air defense assets of the Ukrainian army in the south-east of the country.

The first three images are dated 14 July 2014 g .:
The 1 image shows launchers of the Buk air defense system in the 8 area, km north-west of Luhansk.
In the picture you can clearly see the self-propelled fire installation and two start-loading machines.
2 shows radar stations in the vicinity of Donetsk, 5 km to the north. The picture shows two radar stations, as well as various equipment and technical facilities.
The 3 image shows the position of air defense equipment in the region north of Donetsk.
The picture clearly shows a self-propelled fire installation with a rotated launcher, about 60 units of various military and special equipment, equipment shelters and other technical facilities.

And here is a snapshot of the same area, taken on 17 July.
Please note that this launcher is missing.
The 5 image shows that in the morning of the same day near the settlement Zaroshchinskoe, that in the 50 km east of Donetsk and in the 8 km south of Shakhtersk, the Buk battery was found. The question arises, why was the battery in the area, near the territory controlled by the militias, and just before the tragedy?

The 18 July filming of this area in the same area (6 image) showed that the battery had left its previous position.

In addition, it was precisely by July 17 that the work intensity of the Ukrainian 9С18 “Kupol-М1” radar stations of the Buk anti-aircraft complex increased to the maximum.

You can clearly see on the slide that 15 July worked 7 stations, 16 July - 8, and July 17 - they were already 9. But since July 18, the radar work intensity has sharply decreased and now amounts to 2-3 per day. What is the reason for this remains to be understood.

Separately, I would like to show data on the air situation in the Donetsk region on this day.

On the slide you see the data of objective control in the period from 17.10 to 17.30 hours Moscow time.

During this period, there were three civil aircraft in the air, operating regular flights:
Flight from Copenhagen to Singapore on 17: 17;
Flight from Paris to Taipei at 17: 24;
Flight from Amterdam to Kuala Lumpur.

In addition, Russian means of controlling the air situation recorded a climb of Ukrainian Air Force aircraft, presumably Su-25, in the direction of the Malaysian Boeing-777. The removal of the Su-25 from Boeing-777 ranged from 3 to 5 km.

In terms of its characteristics, the Su-25 is capable of briefly reaching an altitude of 10000 m. Its standard weapons include an air-to-air missile P-60, capable of capturing and hitting the target at a distance of 12 km, and guaranteed at a distance of 5 km.

What was the purpose of the combat aircraft flying along the civil aviation air route almost simultaneously and on the same flight level with the passenger aircraft? I would like to get an answer to this question.

This information is confirmed by the video footage of the work during this period of the Rostov Zonal Center of the Unified Air Traffic Management System. They will be commented on by the Chief of the General Staff of the Air Force, Lieutenant-General Igor Yushevich Makushev.

Commentary by the Chief of Staff of the Air Force of the Russian Federation, Lieutenant General Igor Makushev:

Today, objective monitoring data from the Rostov Zonal Center for the Unified Air Traffic Management System has been received from the Federal Air Transport Agency.

This video shows dispatching information about the air situation in the city of Donetsk from 17 hours 19 minutes to 17 hours 25 minutes (Moscow time) 17 July 2014.

In the upper left corner of the mark of the aircraft Boeing 772, performing a flight on the route COPENHAGEN - SINGAPORE.

Below it is a mark from an aircraft Boeing - 777, following the route AMSTERDAM - KUALA - LUMPUR.

On the right is a mark from a Boeing-778 aircraft following the DELI-BERMINGAME route.

All three aircraft are consistently observed by three radar posts of the Ministry of Defense of the Russian Federation.

Boeing - 777 is moving in the direction of the state border of the Russian Federation and must cross it at the point "TONAK".

The dispatcher, in advance of monitoring the flight of the aircraft, constantly requests its flight parameters for compliance with the specified ones.

In 17 hours 20 minutes at a distance in 51 kilometer from the state border of the Russian Federation in azimuth 300 degrees, the plane abruptly began to lose speed, which is clearly visible in the scoreboard of the characteristics of the air object.

When the speed drops to 200 kilometers per hour in 17 hours 21 minute 35 seconds in the place of the destruction of the Boeing a new mark about the air object appears.

This air object is stably observed by the USTB-DONETSK and BUTURIN radar posts during 4-x minutes.

The dispatcher, while requesting the characteristics of the newly appeared object, cannot receive data on its parameters, since most likely the aircraft is not equipped with a secondary identification system, which is typical of military aircraft.

Previously, the detection of this airborne object was not possible, since the control of the air situation is carried out by radar on-duty with detection capabilities at a given range at a flight altitude of more than 5000 meters.

Detection made possible by climb.

A further change in the object's flight parameters at the rate indicates that it is patrolling in the area of ​​the Boeing destruction - 777 and monitors the development of the situation.

Earlier, Ukrainian officials reported that on this day there were no Ukrainian military aircraft on the line of the original incident. As you can see, it is not. Thank.

There is a question for our American colleagues. According to the US representatives, the United States has pictures from space confirming that the launch of the rocket in the direction of the Malaysian aircraft was made by the militias. But no one has seen these pictures.

According to our calculations, in the period from 17.06 to 17.21 (Moscow time), 17 in July really flew over the southeastern territory of Ukraine the American spacecraft. ” This is an apparatus of the STSS experimental space system, designed to detect and track rocket launches of various ranges. If the American side has pictures from this satellite, you would be asked to submit them to the world community for detailed study.

Is it a coincidence or not, but the time of the crash of the Malaysian Boeing-777 and the time of observation by the American satellite of the Ukrainian territory coincide?

In conclusion, I would like to note that the information we provide is based on objective and reliable data of various Russian technical means, as opposed to baseless accusations against us. An example of this is the display in the media of the transfer of the Buk-М1 launcher on a trailer allegedly carried out from Ukrainian to Russian territory. There is an obvious juggling of materials.

The pictures were taken in the city of Krasnoarmeysk, as evidenced by the banner next to the expensive one, which shows the address of the dealership on Dnepropetrovsk 34. And Krasnoarmeisk with 11 May is under the control of the Ukrainian army.

In this regard, we have a number of questions. What is this launcher? Where was it transported? Where is she now? Why is it not loaded with a full ammunition rocket? When was the last time it was started?

Concluding my speech, I want to emphasize that the Russian Federation did not transfer the Buk-M4 anti-aircraft missile systems to the militia, as well as other types of weapons and military equipment.

Materials prepared by the Russian Ministry of Defense today will be handed over to experts from leading European countries and Malaysia. I hope that they will help in carrying out an objective investigation of the tragedy that took place on July 17 in the skies over Donetsk.

The Ministry of Defense will continue to report on newly discovered facts related to the crash of a Malaysian Boeing-777 aircraft. 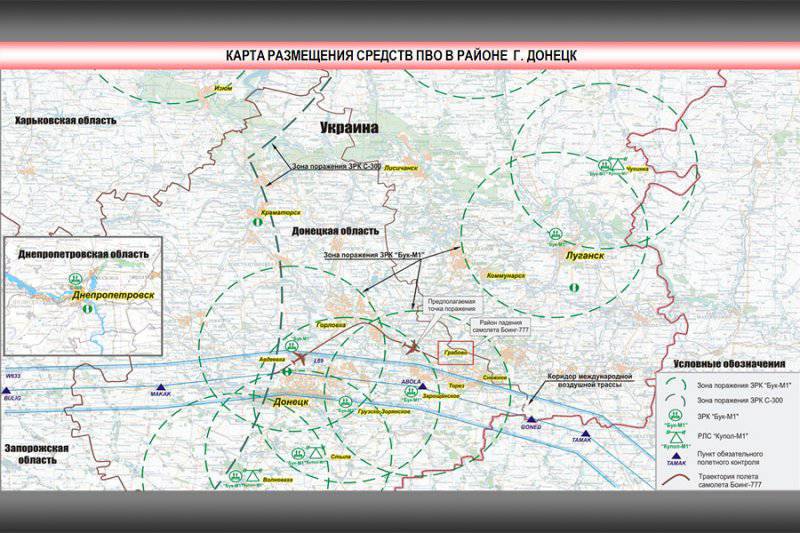 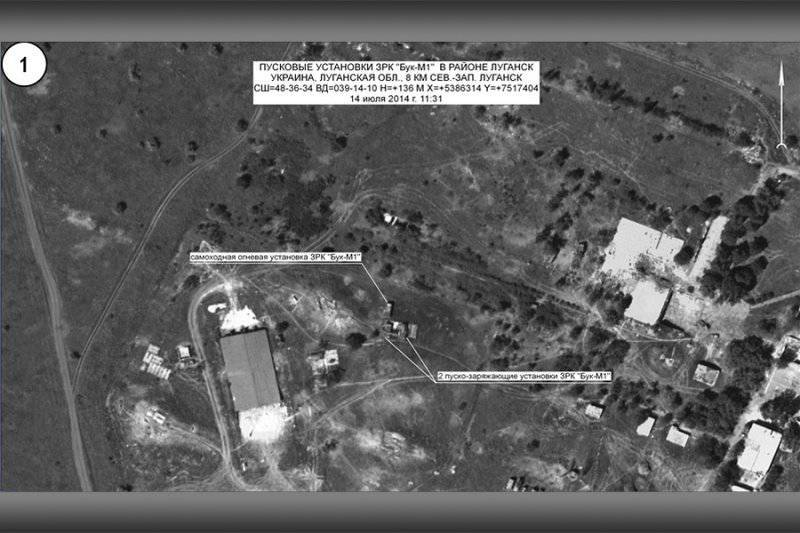 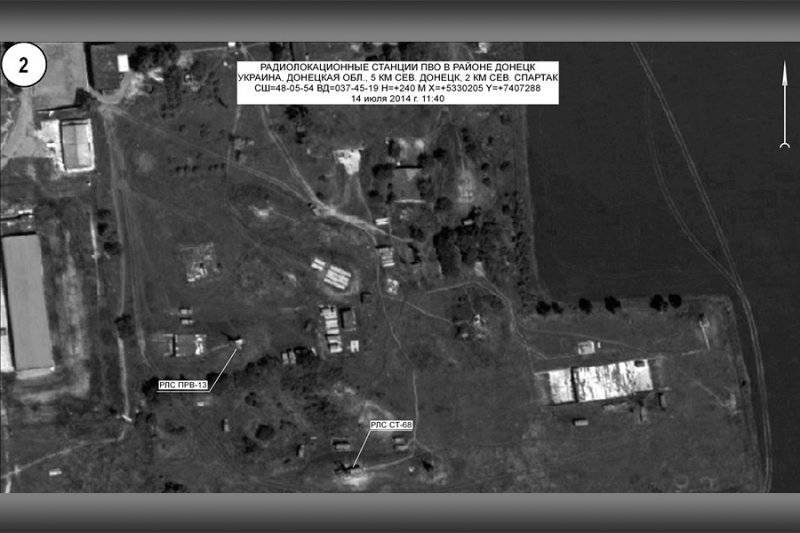 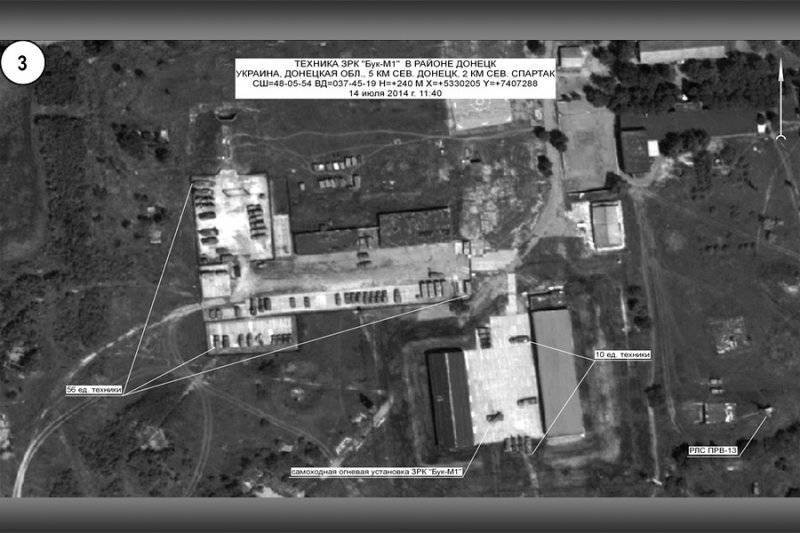 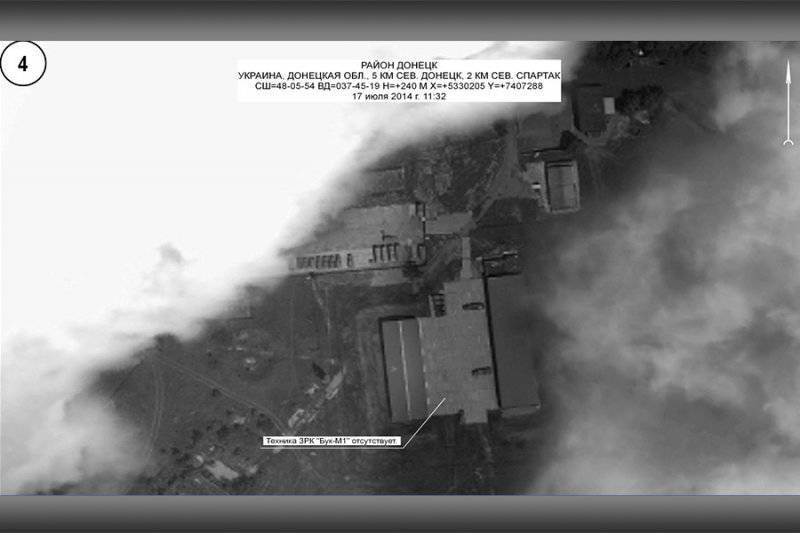 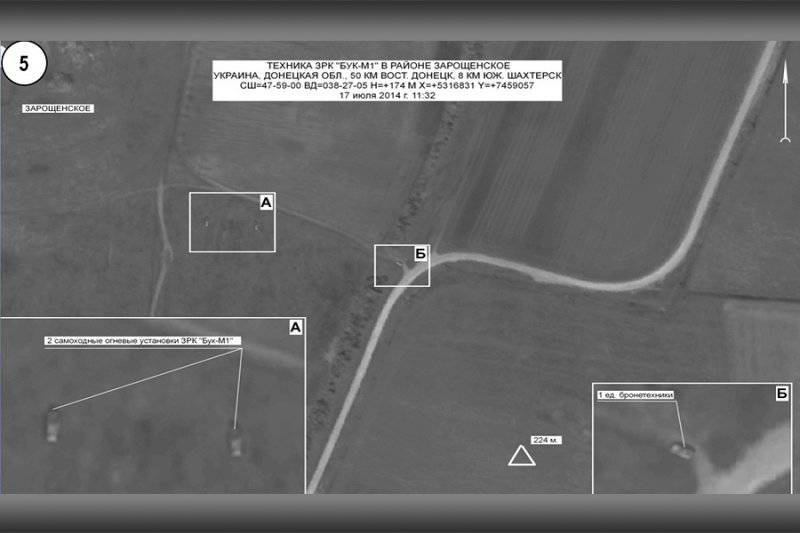 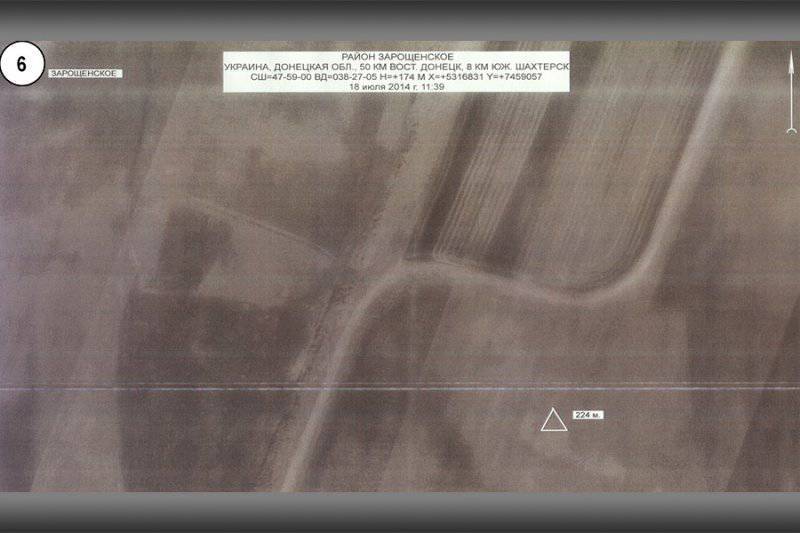 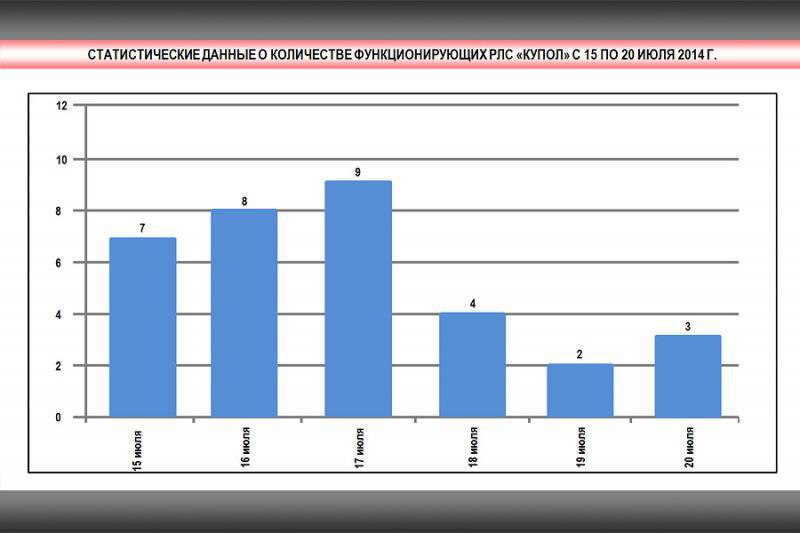 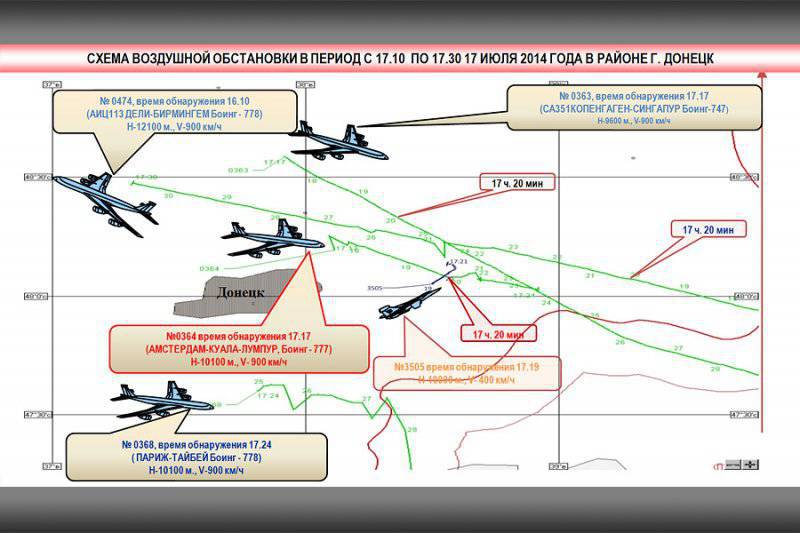 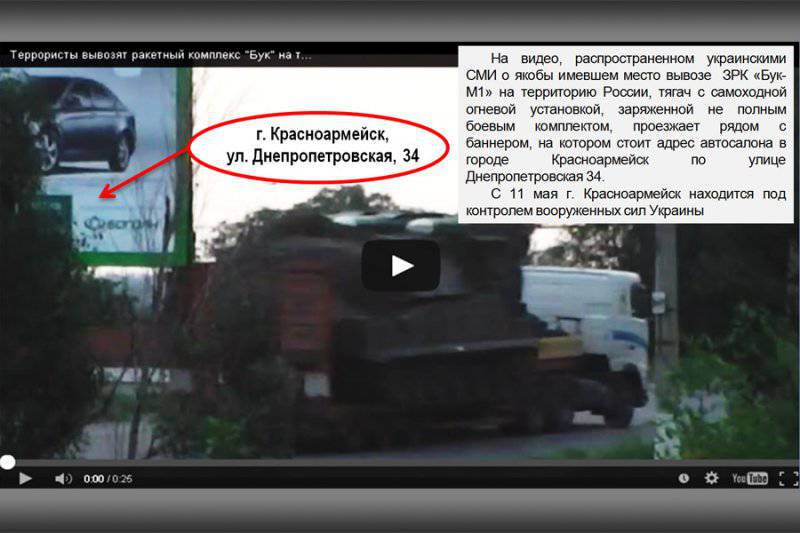 Author:
Office of the Press Service and Information of the Ministry of Defense of the Russian Federation
Originator:
http://function.mil.ru/news_page/country/[email protected]

Ctrl Enter
Noticed oshЫbku Highlight text and press. Ctrl + Enter
We are
Results of the week. "Either true or all is well"
Military Reviewin Yandex News
Military Reviewin Google News
70 comments
Information
Dear reader, to leave comments on the publication, you must sign in.