July 22 2014
45
According to Ukrainian and Russian media reports, on the evening of July 13, the Ukrainian armed forces attempted to bypass Lugansk and break through to the troops surrounded at the Lugansk airport. The first separate was thrown into battle tank brigade in service with which there are several types of armored vehicles. Among other vehicles, this connection operates the main tanks T-64BM "Bulat", which is the latest modification of the family. The July 13 fight was not only one of the first cases of combat use of the Bulat, but also opened the account for their losses. According to some reports, three Ukrainian tanks were destroyed that day, one of which was the T-64BM. In addition, Ukrainian troops lost several armored personnel carriers and vehicles.


Shortly after the 13 fights of July, the first photos of their results were published. On one of them, a burnt tank was captured with a number of characteristic signs, which allowed to define it as Bulat T-64BM. This car had not only to take part in hostilities, but also to become the first destroyed tank of its model. The Ukrainian tank was shot down and burned down near the town of Lutugino in the territory of the unrecognized Luhansk People's Republic. 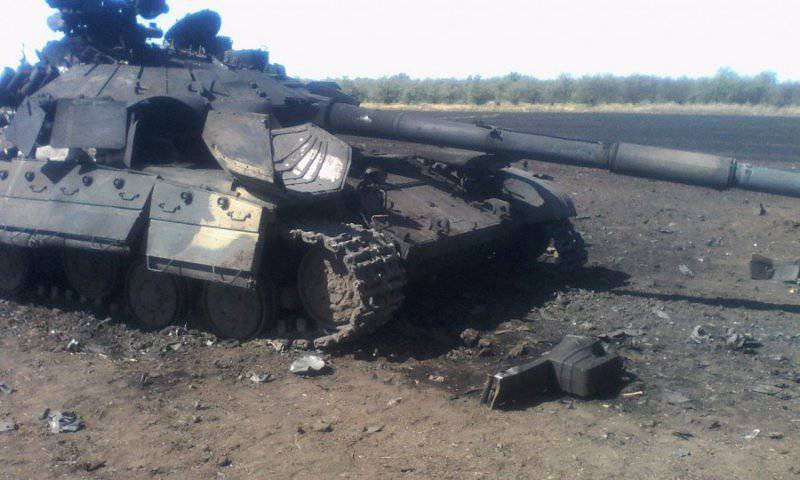 There are at least two photographs of the first Bulat tank destroyed. They are clearly visible damage to the external elements of the combat vehicle, which allow you to build their assumptions. At the same time, it is impossible to talk about anything with certainty, since accurate and confirmed data on the course of the battle and the method of destruction of the vehicle are still lacking.

When examining the existing photographs of a burnt T-64BM, numerous damage to the external aggregates of the tank, as well as numerous traces of burning, are the first to be noticed. On-board screens, additional turret protection and other elements of the machine are noticeably deformed, smoke grenade launchers are dented or torn from their seats. In addition, the body is covered with soot. Best of all traces of burning are visible on the log, fixed on the stern of the machine. Probably, during the battle the car lost its course, after which it was shot by the enemy. In favor of this version speaks torn left caterpillar.

Internal damage to the tank is unknown, but some things may indicate serious damage to some units. The photo shows that the tank almost fell on the bottom of the bottom, so torsion suspension slipped. Despite all the damage to the tank, his crew could have survived or at least left the wrecked car. The hatches of the crew were open and, apparently, already after that they were covered with soot.

The method of destruction of the tank remained unknown. Probably, the projectile or rocket hit the port side and therefore there is no hole in the published photos. The fire could have followed the hit, as a result of which the external surface of the car received characteristic damage, and the torsion bars did not cope with the thermal loads and “sat down”. However, the fire did not lead to the detonation of the ammunition, and this fact may disprove the version about the penetration of the left side of the fighting compartment.

As an alternative version, taking into account the strong burning and other damage to the destroyed tank, you can consider the use of reactive artillery. Finally, the Ukrainian media could not be mistaken, and the tank was indeed destroyed by a rocket-bomb attack from the air. However, in this case, there are corresponding not entirely pleasant questions to the pilots of the Ukrainian Air Force.

Some issues may be caused by a tow rope attached to one of the stern hooks of a burnt car. This nuance can serve as the basis for another version: the tank was hit and lost the ability to continue the battle. After that, they tried to evacuate him, but for some reason they abandoned him. Perhaps the reason for this was the beginning of the shelling that destroyed the tank.

Anyway, the incident with the T-64BM “Bulat” tank near Lugansk confirms the obvious fact: any armored vehicle can be damaged or destroyed. However, some of the features of the T-64BM project, as well as the “PR campaign,” which once developed around it, gives the situation an ambiguous look. The “Bulat” project was created with the aim of bringing the characteristics of the production tanks of the T-64 family to the level of the T-84U tank. To this end, in the course of repair and modernization, new engines, a new fire control system and sighting devices, a Knife dynamic protection, as well as a set of other equipment, were received.

In numerous and not always objective comparisons with other tanks, the T-64BM vehicle regularly received good marks. Special praise was given to the protection system, in particular the dynamic protection "Knife". Serial re-equipment of existing tanks in accordance with the new project was launched in 2004 year. Earlier, the Ministry of Defense of Ukraine planned to upgrade T-400 tanks to 64, however, limited financial capabilities forced to seriously reduce the order. In 2004, a contract was signed to update the 85 T-64 production tanks. The first batch of 56 Bulatov was handed over to troops in 2008. By 2012, the number of these tanks reached 76.

Since the beginning of July, reports began to appear on the use of T-64BM tanks in battles with Luhansk and Donetsk "terrorists". Already 13 July was destroyed the first of the machines of this type. Active participation in the battles of the 1-th separate tank brigade, armed with Bulaty, may indicate that the loss of this type of equipment will continue. Further operation of this type of equipment in conditions of real conflict will allow to understand its real potential and effectiveness. Nevertheless, it is already clear that the effectiveness of the use of tanks of all models will be directly related to the level of crew and command training, and it leaves much to be desired.