Night over the country: heavy 1920s

July 13 2011
7
The end of the Civil War did not end the torment of the peoples of Russia; in the 1920s, especially in the early years of the decade, several ugly and horrendous events can be noted: from the end of 1920 - the beginning of 1922, the peak of terror reached its peak; the so-called “Stalinist camps” were created by 1918 on the initiative of Sverdlov, Lenin and Trotsky - they were ordered to be created in each region, as there were not enough places in prisons. In 1920, the system created the Northern Special Purpose Camps (ELEPHANT), initially there were only two camps - in Arkhangelsk and Kholmogory. They were called “special” because they eliminated people there.


The policy of “disclosing” continued: the Cossacks were recognized as the “abolished” estate, they became “deprived”, that is, deprived of civil rights, as well as nobles, clergy, merchants. Region Don troops dismembered: the western part was given to Ukraine, other territories were divided between the regions. The Kyrgyz (Kazakh) Autonomous Republic gave the lands of the Ural, Semirechensky, Orenburg troops, the southern part of the territory of the Siberian army. The Kalmyk Autonomous Region was isolated from the lands of Astrakhan, the Buryat-Mongolian Republic was separated from the lands of the Trans-Baikal Army. Thus, they laid a “mine” of national autonomies and republics under Russia, at the same time destroying the Russian military estate that preserved the ancient traditions of Russian soldiers. 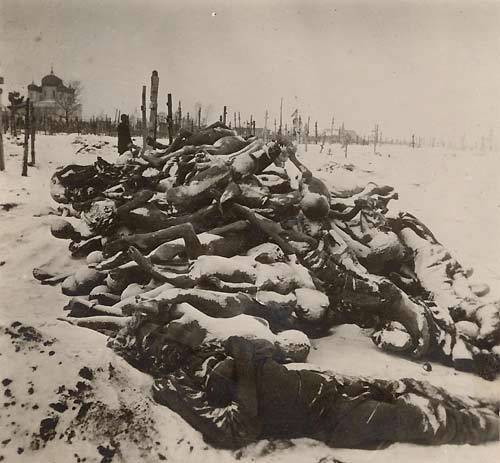 The corpses of the deceased from hunger collected in December for several days 1921 at the cemetery in Buzuluk.

Worst of all were the Kuban and Terek Cossacks, because they were under the domination of whites during the 1919 terror period of the year, during the Civil War, so thousands of people were repressed. In the North Caucasus, “Sverdlovsk-Trotskyists” have relied on Chechens, Dagestanis, Ingush and other Highlanders. The Gorskaya and Dagestan autonomous republics were created, they were given significant parts of the Cossack lands. From the Kuban, the southern part was given to the Mountain Republic, the eastern part to the Stavropol Territory; Terek gubernia retained approximately 19% of former lands. During the deportation of the Cossacks, a genuine genocide was arranged, in which the Highlanders also participated, at that time about 35 thousand Cossacks were destroyed.

The so-called policy of “war communism” continued with the prohibition of trade, “product exchange”, the seizure of valuables and gold, the receipt of manufactured goods and foodstuffs using ration cards; Trotsky generally wanted to create a system of universal forced labor, for which he created the "labor armies". In March, 1921, at the tenth congress of the Communist Party, he stated the following: “We must finish with roaming Russia. We will create labor armies, easily mobilized, easily transferred from place to place. Labor will be encouraged by a piece of bread, insubordination and lack of discipline be punished with prison and death. ” Trotsky equated "labor desertion" to the act of counter-revolution.

At the same time, American businessmen took root in the Soviet economy, taking the place of foreign companies of the pre-revolutionary era. They were given in concession (the right to exploit something) enterprises, deposits of natural resources. The Vanderlipu American was handed over to concession the whole of Kamchatka (!), Although the idea fell through, but the idea was something. According to the plans of the “world behind the scenes”, which the Bolsheviks, the “internationalists” led by Trotsky, led, Russia was to become one giant concentration camp, a “testing ground” for testing the “New World Order” system, with free slave labor for food rations death "for the elimination of all recalcitrant, with the pumping of resources, the treasures of the country, accumulated over the centuries.

But in the end, this policy had to be curtailed, uprisings swept almost the entire country, Russia was on the verge of a new Civil War — already the peasants were against the “Reds”; the state would not have sustained it. Neither mass executions nor downtrodden concentration camps helped, but most of the population could not be destroyed - peasants made up about 80% of the population and even more, many workers, in order not to die of starvation in cities where there was no work, returned to peasant labor. In addition, the sensible Bolsheviks, “patriots” began to ask questions. As a result, they introduced the famous NEP.

At the same time, famine was used as a pretext to strike another blow to the Church, the initiator of which was Trotsky. 17 March 1922, he presented his plan, which Lenin fully approved. In addition to the seizure of values, there were demonstration trials of clergymen. In addition, the Church tried to split, and this direction was also supervised by Trotsky. Patriarch Tikhon was arrested, with the "contingent" led the work, identifying those who will cooperate. As a result, the course of the “Renovationists”, led by Bishop Antonin, was created, in Ukraine they created another direction - the Ukrainian Church. What is interesting, with other religions - Catholicism, Protestant trends, Judaism - did not struggle so much, with such consistency and pressure. It was also not easy for them - the policy was anti-religious, but there were indications of “national peculiarities” to treat carefully, they say, they are eliminated gradually, over time, as people become aware. Protestants, various sectarians even handed over churches and temples, seized from the Orthodox Church. As a result, the number of congregations of various areas of Protestantism grew in 1920 in 5 times (!).

Russia was exsanguinated, “strangers” triumphed: During the Civil War, Russia lost only those who died (in battles, from epidemics, famine, terror, etc.) - 13-15 million people, another 5-6 million died from starvation in 1921-1922 years, more than 2 million fled from Russia. This is not counting the disabled, maimed, lost health, morally maimed, not born, taking into account what the indirect losses are simply enormous. The industry was destroyed, rural production was almost halved, vast territories were lost.

It is simply amazing that JV Stalin and his team were able to make such a fantastic leap in 1930-s, that they managed to heal such wounds ...

We are in Yandex Zen
Cossacks in the Civil War. Part II. 1918 year. In the fire of fratricidal Troubles
Azov seat and the transfer of the Don troops in the Moscow service
7 comments
Information
Dear reader, to leave comments on the publication, you must to register.