Who builds the "Arab Caliphate-2?" 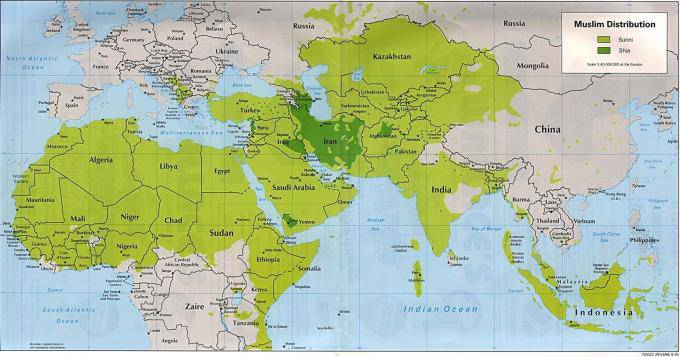 Unrest in the countries of the Arab world, in North Africa, events in the Balkan Peninsula, in the South Caucasus, in Afghanistan, Pakistan create a good basis for the creation of the “Islamic Caliphate-2”. The militarized secular elites in Egypt and Tunisia were displaced, and the Salekh regime in Yemen actually fell under the blow of the elites of Libya and Syria. The monarchies of the Arabian Peninsula unite their efforts in combating the "Arab syndrome", but the regimes will collapse if they wish in London and Washington, they actually created them and maintain their existence, so long as it is profitable.


Two main scenarios are possible here, since there are practically no independent and strong players in the Islamic world. In the first scenario, “Caliphate-2” will create (or already create?) Anglo-Saxons, in contrast to the growing China, for the environment of India, so that it “does not twitch”, for the threat of Russia and the creation of a virtual danger to Europe. The European Union will be forced to remain focused on Washington, since only it can protect it. Apparently, they will create with the help of monarchy countries of the Arabian Peninsula, for this they are rallying and heavily arming. The main enemies of this scenario are Syria, Iran, so they will be crushed to the last, the elites in these countries are to be shifted. Turkey is in doubt, its elite are carrying out plans of the Ottoman Caliphate-2, which, in principle, with the support of the Anglo-Saxons, can become the basis for the Caliphate-2.

The second scenario, followed by Beijing and the Rothschilds, is the “Caliphate-2” led by Iran, which will become China’s strategic ally in the fight against the hegemony of the Anglo-Saxon project. China thus "kills two birds with one stone": it does not directly oppose the United States, since the Anglo-Saxons will oppose the "Caliphate" and China will have free hand in other regions. In addition, China will solve the problem of hydrocarbons, having obtained a reliable resource base, at the same time putting India in a difficult situation - it will actually get surrounded.

In principle, these scenarios can embody at the same time, so, quite possibly, the first blow was struck by Iran in secret union with China - the revolutions in Tunisia and Egypt, and then the Anglo-Saxons took the initiative.

"Pros" in the creation of the "Islamic Caliphate"

-the ability to become one of the world centers of power by implementing the Islamic project in opposition to the West;

-control over huge reserves of hydrocarbons, a number of other major resources (for example, only deposits of iron, copper, cobalt, gold and lithium were found in Afghanistan);

-the possibility of expanding its territory at the expense of Central Asia, the Balkan Peninsula, etc .;

- its nuclear weapon and Pakistan already has delivery vehicles, the possibility of possessing missile weapons (ICBMs) by Iran with the help of the PRC;

We are in Yandex Zen
Yemen war. Russia's interest - the weakening of the Saudis
What will lead the "Arab winter"?
12 comments
Information
Dear reader, to leave comments on the publication, you must to register.