Machine, which are accustomed to 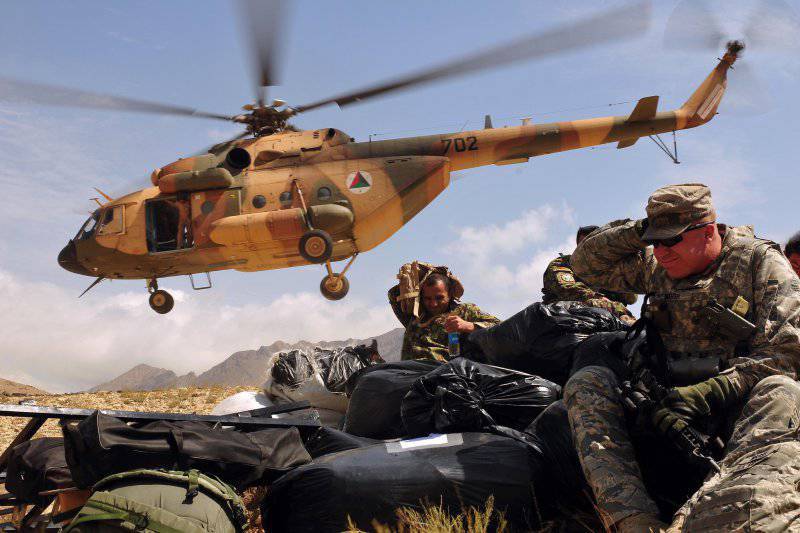 The next batch of three military transport helicopters, manufactured in Russia under a contract with the US Department of Defense, was to go to Afghanistan in June. As a source in the Russian military-industrial complex (DIC) has reported, at the moment, under a contract with the Pentagon Rosoboronexport, it remains to deliver five batches of military transport helicopters Mi-17В-5 each to Afghanistan.

The main contract for the supply of a 21 helicopter, signed by Rosoboronexport with the US government on 26 May 2011, was executed by the middle of 2012. In 2013, Russia completed the transfer to the customer of another 12 military transport Mi-17В-5 under an agreement concluded as part of the option to the main contract.

In 2013, Rosoboronexport and the White House agreed and signed an agreement for an additional batch of 30 helicopters for delivery in 2014. Their mission is the joint struggle of countries against international terrorism.

In total, in accordance with bilateral agreements, the Afghan army will receive an 63 Mi-17B-5 helicopter. All lighting equipment machines adapted to the possibility of flying at night. The total value of the contract is about 1,2 billion dollars. The acquisition of helicopter technology in Russia is part of a broader US operation and the ISAF (International Security Assistance Force) aimed at increasing the capabilities and capabilities of the Afghan national security forces.

According to Western sources, the ANA (Afgan National Army) Aviation Corps of the Afghan National Army currently has ten attack Mi-24 / Mi-35, eight military transport Mi-8 and 48 Mi-17В-5, the total number of which by the end of the year will increase to 63 units. Under a contract with Rosoboronexport, Mi-17В-5 manufactures Kazan Helicopter Plant (KVZ). The machines supplied to Afghanistan have Western-made 17 components that have been integrated into Russian on-board equipment.

According to experts, these Mi-17B-5 are capable of performing combat missions. "In accordance with the appearance agreed with the American side, the helicopters are manufactured in a military transport version, which includes weapons, in particular, unguided rockets, cannon containers with a 23-millimeter cannon," said a representative of the Russian military-industrial complex.

Reliable in a storm

Before the direct contract with Rosoboronexport, the Americans tried to retrofit new Russian helicopters on their own at a repair base in the UAE (the city of Sharjah). Today, under the contract for the supply of the Mi-17B-5, all work is carried out at the KVZ, which has proved its effectiveness both in terms of production and in the highest quality of execution. They are carried out under the control of the helicopter developer, the Moscow Helicopter Plant, as well as representatives of the Russian Ministry of Defense. “Thanks to this, for the first time in their practice, the American side received ready-made Mi-17В-5 helicopters that do not require any modifications and meet the requirements and conditions of the region in which they are operated,” said a source in the defense industry.

Earlier, the deputy director of the Federal Service for Military-Technical Cooperation of Russia, Vyacheslav Dzirkaln, said that the US delegation had visited the KHP, where helicopters for Afghanistan are manufactured. “The American representatives inspected the plant, including the already manufactured fuselages. They were pleasantly surprised by the level of organization of production and the technical equipment of the enterprise, Dzirkaln noted. - We have constant contact with representatives of the US Department of Defense, and a working group has been created to monitor the implementation of the contract on both sides. There are no contradictions with American partners. ”

According to Rosoboronexport Director General Anatoly Isaykin, the helicopter contract with the Pentagon was one of the most difficult because of collisions related to US law. “We never worked on such conditions,” he said. “Now we can have prospects for supplying other types of weapons for the Afghan army in a similar way.”

All helicopters assembled at the KVZ are transported to Kabul by An-124 Ruslan transport aircraft of Volga-Dnepr Airlines. In one flight, the An-124 delivers three vehicles to Afghanistan, which are located in the cargo hold with the main rotor blades undocked.

“The US Department of Defense positively assesses the quality of Mi-17B-5 helicopters received for Afghanistan from Rosoboronexport,” Dzirkaln underlines. According to him, recognition of the high flight qualities and reliability of the Mi-17В-5 from the American side was the handing of the certificate 9 of November of the year 2011 for recognizing procedures for ensuring and maintaining the airworthiness of helicopters existing in the Russian Federation. Representatives of the United States have repeatedly stated that they chose Russian helicopters because of their unprecedented high reliability, including in the conditions that exist in the deserts, where strong sand storms are not uncommon.

In a letter to the management of non-standard rotary-winged apparatus NSRWA (Non-Standard Rotary Wing Aircraft) of the Ministry of Ground Forces, the Russian side has done an excellent job of adapting foreign flight navigation instruments to the use of night vision goggles. The representative of the military-industrial complex informed that from the very beginning of the supply in 2011, the American side did not have any complaints about the quality of the aircraft: “All helicopters arrived in Kabul on time, they were assembled, flown around and after the signing of the corresponding acceptance certificate . The serviceability of the fleet of supplied Russian helicopters exceeds the required level in 80 – 90 percent, and this figure meets all the requirements. ” The source informed that the average annual flight time of one Mi-17В-5 in Afghanistan is more than 200 hours: “This indicator is higher than the average annual attack of ordinary operators”.

The interrepair life of the Mi-17B-5 helicopter is 2000 hours or 8 years. At present, the Russian side is working to increase the assigned helicopter resource (the time interval between the introduction of the rotorcraft into service and its disposal). Today, the service life of a military transport helicopter Mi-17B-5 can reach 35 years.

Despite the fact that the United States government does not use the opportunity to purchase spare parts for the operation and repair of Mi-17В-5 helicopters directly from Russian special exporters, in the future, when overhauling Americans, according to the source, it’s still necessary to turn to the manufacturer. Abroad, of course, there are a number of enterprises that are able to work with Russian aircraft, for example in the Czech Republic or the United Arab Emirates. Zaporozhye Motor Sich JSC has the capacity to repair engines. "However, the United States will have to turn to Russia for the maintenance of gearboxes, transmission bushings and so on - the manufacturer of these important components," said the representative of the defense industry. According to him, more than 200 Russian-made machines are operated in total in Afghanistan and Iraq, taking into account the newly delivered and decommissioned helicopters.

Senators - against, military - for

Rosoboronexport drew the attention of the Pentagon to the need for proper and legitimate after-sales service of the Russian Mi-17В-5 supplied to Afghanistan under contract. According to the data available to the Russian side, at present, the expected need only for overhaul and repair of helicopters of all types operated in the territory of Afghanistan and other countries in the interests of the United States is over 170 units.

“The Russian side has all the necessary conditions to carry out repair work and meet such high demand for maintaining the airworthiness of previously delivered helicopters,” said Anatoly Isaikin.

The implementation of the contract for the supply of Russian helicopters for Afghanistan is considered by the US military to be very important in the light of the fight against international terrorism and the provision of increased capabilities and capabilities of the Afghan national security forces. This was stated by the official representative of the Ministry of Defense George Little.

When he was asked to comment on the ongoing attempts by the republican opposition in Congress to block further purchases of Russian military equipment for the armed forces of Afghanistan, Little said that the vehicles being acquired are an important tool for the Afghan air force: “They need just such a helicopter, this is very important for them, because it complements the fleet used helicopter technology ".

Earlier in the US Senate, an amendment was made to the draft law on rendering assistance to Ukraine concerning the break in business relations between the US government and Rosoboronexport. The presented document contains a proposal to ban participation in US government contracts for any American or foreign company, which in turn interacts with development, production and sales with Rosoboronexport. Prior to this, a number of members of the House of Representatives appealed to Defense Minister Chuck Hagel to suspend cooperation with the Russian exporter of military equipment.

Despite the constant pressure of congressmen and calls for the imposition of sanctions, the refusal to purchase Mi-17В-5 for the armed forces of Afghanistan, the military take the opposite position. "The problem is that representatives of the Pentagon are quietly asking them (congressmen) to postpone these measures, because Rosoboronexport supplies helicopters used by the Afghan Air Force, which are experiencing difficulties today," the sources in the Senate said. “In conversations with us, they use the word flexibility, which means that they want us to make a serious exception for Rosoboronexport,” an employee of the congressional apparatus told the newspaper.

The sanctions imposed against Russia do not affect the contract with Rosoboronexport for the purchase of Mi-17В-5 for the armed forces of Afghanistan, confirmed in an interview with journalists, Pentagon press secretary, rear admiral John Kirby. According to him, Afghans are in dire need of Russian technology. “They are used to these cars. This helicopter meets their security needs, Kirby explained. “Therefore, we continue to support them through this contract.”
More:

We are in Yandex Zen
Photo report from MAX 2013 (KRET Pavilions, Rosoboronexport, Rostec)
Turntables, Afghanistan. MI-24
17 comments
Information
Dear reader, to leave comments on the publication, you must to register.