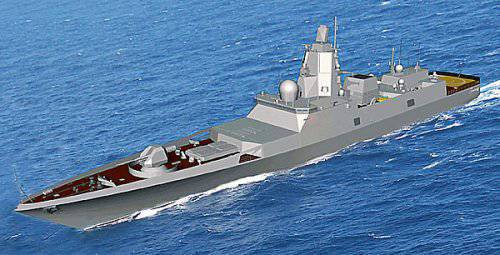 Modernization of the Black Sea fleet, the need for which has been much talked on the sidelines, takes on a visible shape. The Commander-in-Chief of the Navy said on Wednesday that in the next 10 years the southern fleet of Russia will receive 15 new vehicles - these are frigates of project 22350, whose “firstborn” will be Admiral Gorshkov, a shipyard in St. Petersburg, as well as the submarine of Project 677 Lada. It was said earlier that a number of active ships from other fleets would be transferred to the Black Sea.

The Black Sea Fleet of Russia will be replenished with 2020, 15, with new surface ships (frigates of the 22350 project) and diesel submarines (677 “Lada” project), Admiral Vladimir Vysotsky, Commander of the Russian Navy, reported, RIA “News».

“The Black Sea Fleet will be re-armed with new ships, and not at the expense of transferring ships from other fleets,” said the commander-in-chief of the Russian Navy.

The diesel-electric submarines of the 677 Lada project have a displacement of 1765 tons, a length of 67 meters and a width of 7,1 meters. The maximum speed of the underwater and surface run reaches 21 and 10 nodes, respectively. Navigation range economical course - 650 miles. The autonomy of swimming is 45 days. The maximum immersion depth is 300 meters.

The head boat of the project "St. Petersburg" is now undergoing state tests. Currently, ships of the 677 "Kronstadt" and "Sevastopol" project are being built at the Admiralty Shipyards. The boats are intended for the destruction of submarine, surface ships and ships of the enemy, the protection of naval bases, the sea coast and sea communications, reconnaissance.

The frigate of the 22350 project will have a displacement of 4,5 thousand tons, the longest length is more than 130 meters, the cruising range exceeds 4 thousand miles. The main weapons the ship will be eight anti-ship cruise missiles 3М55 "Onyx", a new 130-mm artillery installation A-192, anti-submarine missile system "Medvedka-2", medium-range anti-aircraft missile system "Uragan". The Ka-32 helicopter will be based on the ship.

The 22350 project includes a series of Russian multi-purpose warships of the far sea zone, which are part of the program of rearmament of the Russian Navy. The lead ship of the project is the frigate "Admiral Gorshkov", which was laid 1 February 2006, at the St. Petersburg shipbuilding enterprise "Severnaya Verf". According to the plan, the ship should be operational in the 2011 year.

New ships will replace the outdated technology, which, according to unofficial information, is preparing to write off. So, in April it became known that in the near future several large ships could be withdrawn from the combat fleet of the Russian Black Sea Fleet. According to media reports, a large anti-submarine ship "Ochakov" and a diesel submarine B-380 "Holy Prince George", built in 1982, are preparing to write off. After the write-off of "Ochakov" and "Kerch" in the Black Sea Fleet, only the missile cruiser "Moscow" will remain from the ships of the first rank.

In addition to replacing obsolete ships, optimization of the personnel of the Black Sea Fleet is also being prepared. According to the profile press, by the end of this year, the fleet is planning to reduce to 500 officer positions - first of all, representatives of auxiliary forces, coastal units and rear fleet structures.

At the same time, official confirmation of upcoming officer cuts in the Black Sea Fleet has not yet been received. In this case, the dismissal of seamen in civilian specialties is already underway.