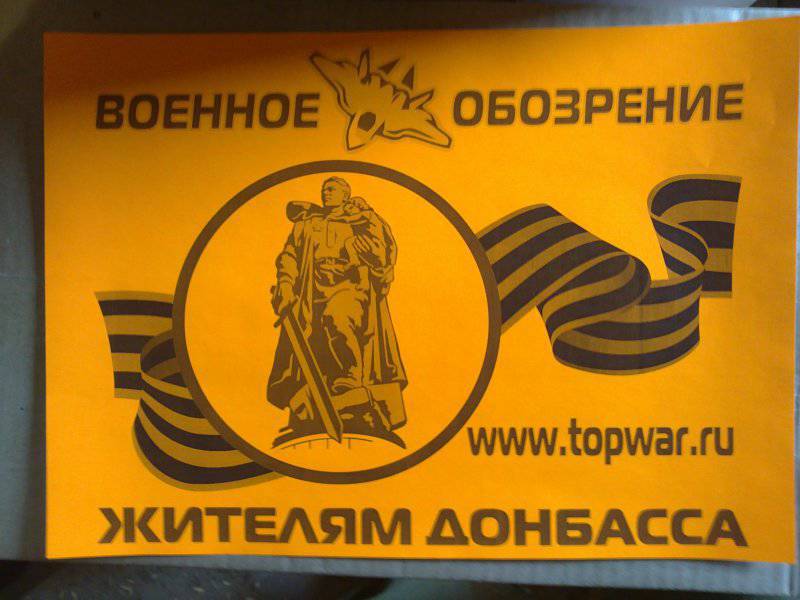 I will begin my report with a little information about the previous delivery. With the help of conversations and expressing displeasure on behalf of our entire audience, I achieved a semi-sensitive answer to the question “Where did our packages go?” From representatives of the Gubareva warehouse. They went to Donetsk. to whom and where exactly - alas, I have not received such information. Here are all the photos that I could get.

Looking at the "operational and quality" work of the warehouse, I began the formation of the second dispatch. At the same time began the search for direct contact, to exclude intermediaries. And in the end, the Donbass battalion "8 company" came out to me. They agreed on a date and a meeting point for the transfer of our cargo.
Here is what I saved at the time of departure and loaded into the truck: 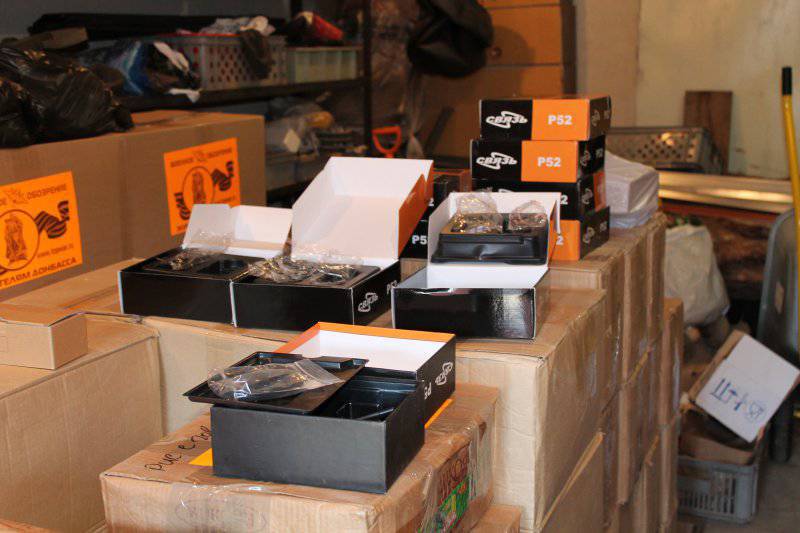 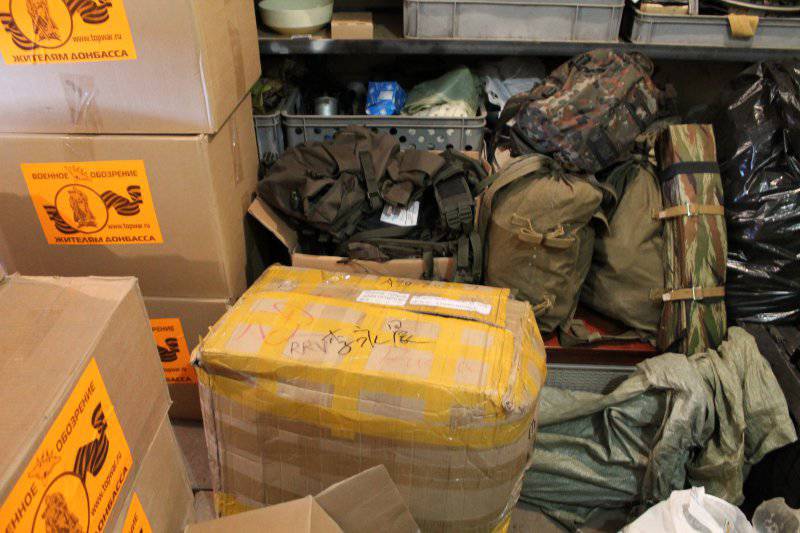 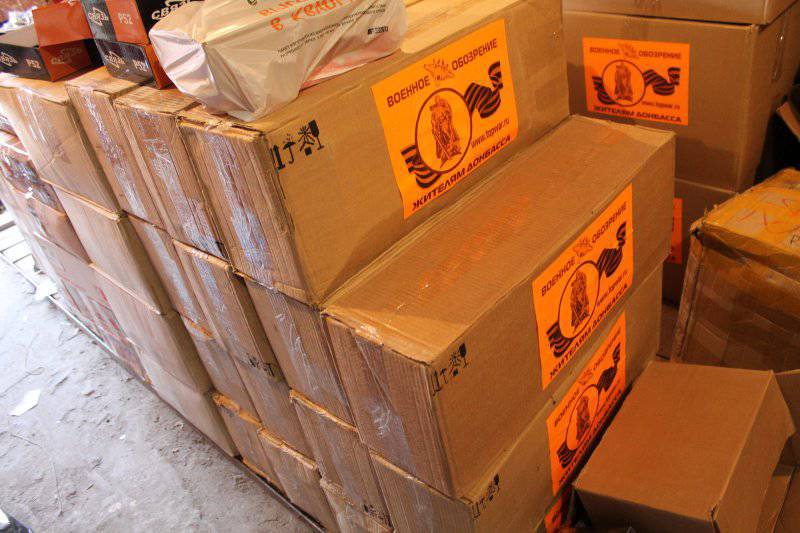 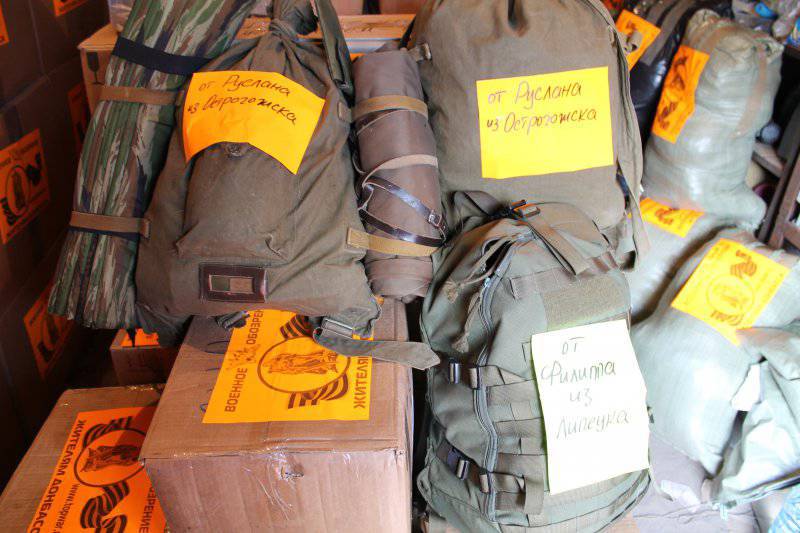 Alexander Drozdov
Ruslan (Ostrogozhsk) - 2 locations
Roman (Voronezh)
Philip (Lipetsk)
These are backpacks with a form, unloadings and other usefulness.
5 Places
Medicines from the air defense party - 8 seats
Groupage cargo from the Voronezh branch of the Humanitarian Corridor - 17 seats.
I wrote ad-libs to several boxes, so, as a message ... I don’t know if the idea was good or not, but like this: 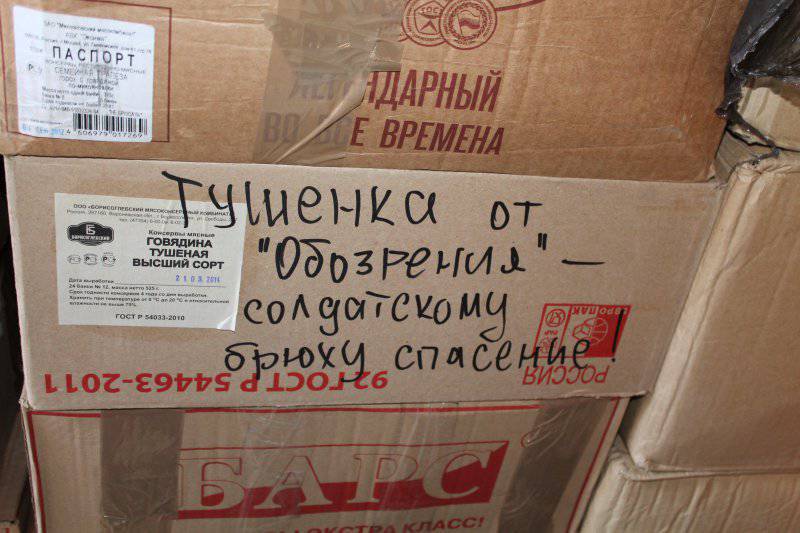 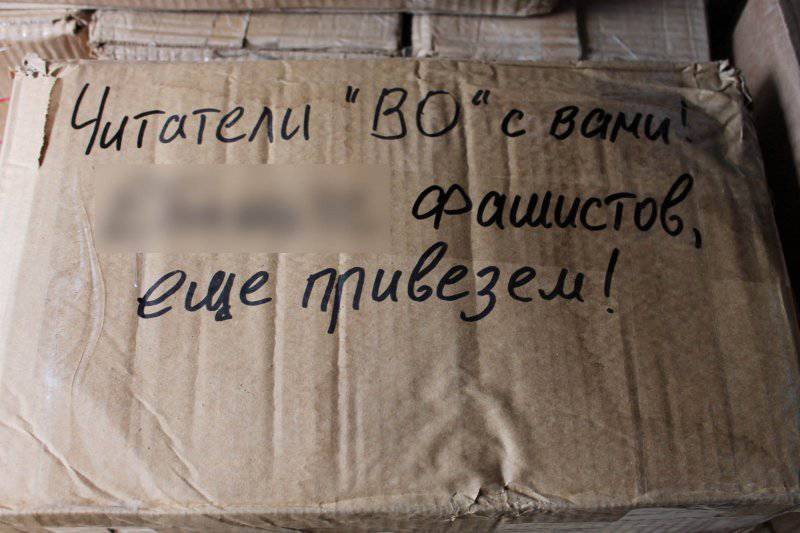 There were more inscriptions, but not everything can be published there. More precisely, nothing is impossible, but for a minute rzhachki I think it will do.
On the ninth in the evening, we successfully put it all into a three-ton "Mitsubishi Kanter" and went there. They arrived without incident. Very pleased with the traffic police, who very clearly explained to us where to go.
Then the problems started. We could not reach the meeting point. "Kanter" did not have time to get stuck so that tightly, managed to leave. Bypass the mud fence also did not work. Phoned, assigned a new place. And, since it was 4 in the morning, they decided to rest until the call from that side.
At five in the morning we were awakened by explosions in the distance. My civilian crew jumped up. Next came the plane, which began to freak out somewhere with rockets. And then the cannonade clearly began to approach. In the area of ​​7 hours was again an airstrike, already closer. And then the explosions began to be heard already ... well, the tremors reached the ground.
Finally, around the 9 clock, Alexander called and said that they were on the way. We also went to the rendezvous point.
The transfer took place near one of the checkpoints. We met and started reloading. The boxes and bags had to be moved somewhere in the 50 meters, the Donetsk ones were justifiably in a hurry, so I repent, I’m a bad correspondent, didn’t take pictures of anything. But the loader is good. We overloaded everything in 15 minutes, until we were especially looking in our direction. Then I took a few shots, but it turned out that almost everything would have to be deleted, since this item was in the field of view of the camera. So forgive me generously, correct the next time. Honestly.
In addition, the guys really hurried, the battle was already very close. To distract them with a photo session and questions my tongue did not turn. Although very much like. So we shook hands, thanked them once again, put the unloadings back on and the rest, and left. Alexander (the castle of the supply battalion) promised to take pictures there and send me by mail. I hope that there will be time for it. 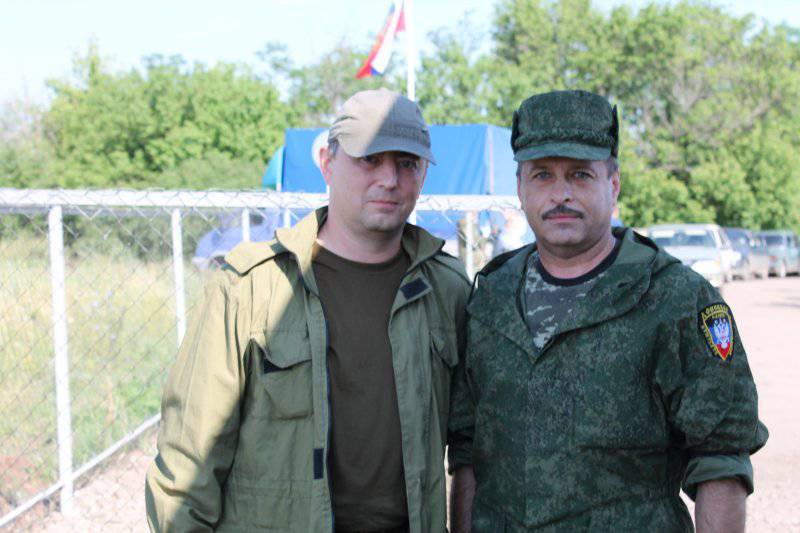 Behind our backs is a gazelle with our cargo. All climbed, you can see that gazelka sat down.
When we were sent back, then within the line of sight, we observed on the other side of the plane a missile strike.
In general, in terms of photos and videos came out clumsily, in terms of the organization of delivery and the quality of equipment - quite.
We will continue. 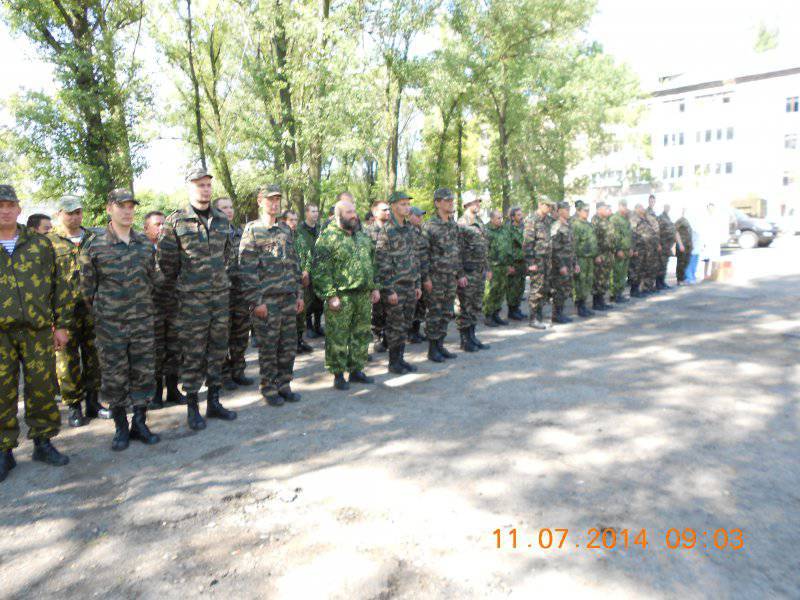 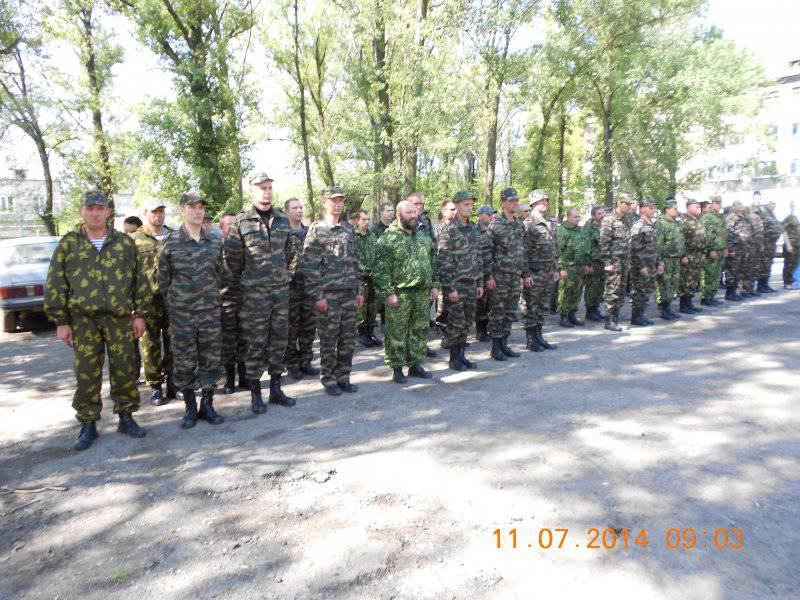 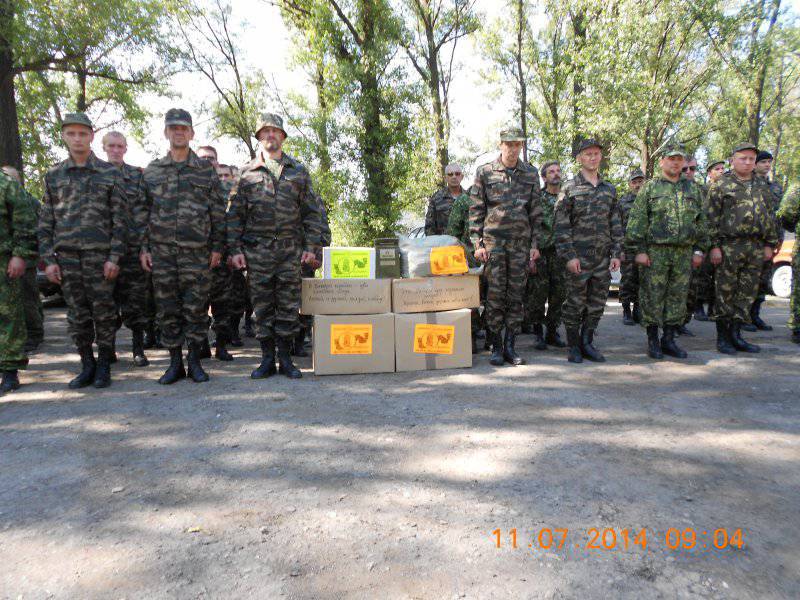 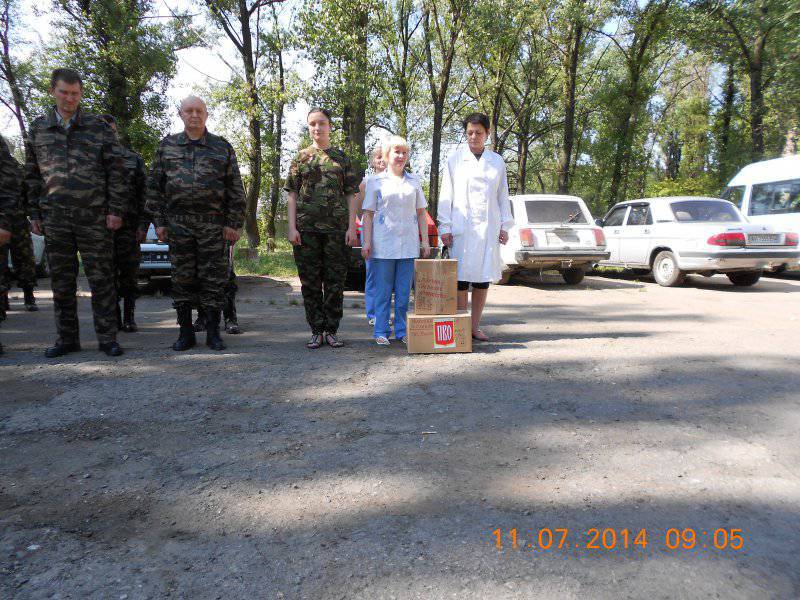