The Ka-60 helicopter fallen in the Moscow region was tested 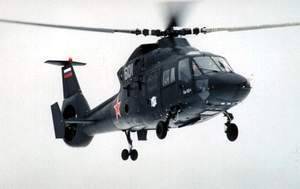 The newest Ka-60 helicopter (“Kasatka”), belonging to the Kamov Design Bureau, on Wednesday made a hard landing in the Lyubertsy district of the Moscow region during a test flight. The helicopter was severely damaged, the pilots on board were injured. They were picked up by colleagues from the second helicopter and promptly taken to the hospital. It is known that the engine failed in the test flight of the "Killer Whale". Why this happened is still unknown.

Two helicopters of the Kamov Design Bureau - the newest Ka-60 - passed flight tests on the basis of the Mil helicopter plant on Wednesday morning.

One of them during the planned flight engine failed, according to Interfax, citing a source in the company.

“The helicopter made a hard landing in the autorotation mode on the outskirts of the city of Kotelniki near the house No. 18 on Ugreshskaya Street. As a result of the hard landing, the car received serious mechanical damage, but the crew, consisting of two test pilots of the plant, survived, although it was seriously injured, ”said a representative of the Kamov Design Bureau.

Both pilots were picked up by colleagues from the second helicopter and taken to the helicopter landing site of the 15-th Moscow City Clinical Hospital in Veshnyaki, whose doctors are now fighting for the lives of the pilots.

Firefighters and ambulance crews arrived at the place of emergency; however, no casualties were reported on the ground.

Earlier it was noted that the helicopter belonged to the Ministry of Defense, but later a representative of the press service and information department of the Russian Federation Ministry of Defense for the Air Force, Lieutenant Colonel Vladimir Drik denied this information. “There were no incidents with helicopters of the Air Force today in the Moscow region,” he said.

The Ka-60 helicopter is a Russian medium multipurpose military transport helicopter. As the newspaper VIEW, it is the only middle-class helicopter that took off after the collapse of the USSR. It was created by order of the Ministry of Defense as a specialized reconnaissance target designator for working in tandem with fire support helicopters. The first flight of the helicopter made 10 December 1998 of the year.

It clarifies aviation Encyclopedia, Ka-60 "Killer Whale" is intended for transportation of armed assault, delivery weapons and ammunition in the area of ​​hostilities, evacuation of the wounded, protection and patrolling of the economic zone based on ships, search and rescue, training and training of flight personnel.

The Ka-60 helicopter is constructed according to a single-rotor scheme with a five-blade main rotor with a diameter of 13,5 m. The blade of the screw from polymer composite materials is attached to the hub by a torsion. The glider has perfect aerodynamic bypasses with large openings for doors on both sides, a retractable three-post energy-intensive chassis and a multi-blade steering (11 blades) propeller in the annular tail channel. Pilots and paratroopers are placed on energy absorbing shock-absorbing chairs. The pilot - the commander of the crew is located on the right seat. The power plant includes engines of a new generation of modular design developed by the Rybinsk Motor Design Bureau under the guidance of the general designer A. S. Novikov.