Rostec presented the first Russian drone at the Innoprom exhibition

July 9 2014
84
As part of the international technology exhibition "Innoprom" in Yekaterinburg, the United Instrument-Making Corporation (part of Rostec State Corporation) presented the unmanned aerial vehicle "Teal". Innovative development - chassis on an air cushion - allows the drone to lift off the ground in the absence of the runway. Development has no analogues in the world.


The uniqueness of the drone is in the design of the air-cushion landing gear, which allows the device to take off from the ground in the absence of the runway or any platform convenient for these purposes. It is able to take off from soft soil, water surface, from marshland, loose snow. Sit on these surfaces, where other aircraft type aircraft take off and sit down will not.

“Today the strategy of development of the radio-electronic industry as a whole has been developed and is being implemented. Already last year, we showed significant results - in the 2013 year, the electronic industry showed a significant increase - by 14% compared with the previous year, - noted the Minister of Industry and Trade Denis Manturov. “The construction of vertically integrated structures within the Rostec State Corporation provides the necessary synergy of development, which gives impetus to the creation of new products that are globally competitive.”

In the civilian sphere, the Teal UAV can be used to monitor and evaluate various situations: monitoring the fire situation in forests, natural disaster areas, the situation on the roads, and patrolling territories. The military version of "Teal" is designed for reconnaissance and use as a drone drone capable of transporting bombs, missiles, high-precision projectiles.

“At Innoprom there is a model of an aircraft that has already been tested at TsAGI (Zhukovsky). "Teal" is our initiative development. The aircraft has no analogues in the world, hovercrafts drones are not commercially available. In the manufacture of a new unmanned vehicle, Russian know-how was used, and this applies to both materials and design. Next year, the full-size UAV will be presented at the MAKS aerospace show, ”said Alexander Yakunin, General Director of the United Instrument-Making Corporation.

The maximum take-off weight of the Teal is up to 700 kg, the maximum payload weight is up to 300 kg. On board, he will be able to take optical-electronic equipment for various types of monitoring, the drone can also carry high-precision weapon. The UAV rises to a height of up to six thousand meters, the flight range is up to 2500 kilometers. At the moment, defense industry specialists are working to further improve the technical characteristics of the Teal UAV.

The design of the device allows you to hide the arms inside the case in contrast to previous models, in which the weapon was attached to the suspension. This innovative solution reduces the visibility of the UAV, improves its aerodynamic properties.

OJSC United Instrument-Making Corporation (OPK) is a holding company that is part of Rostec State Corporation. Created in 2014 year with the aim of organizing high-tech production of competitive products in the field of communication systems and systems, automated control systems, electronic warfare and robotic systems for the Armed Forces of the Russian Federation and other special forces, as well as competitive products for civilian and dual use. The structure of the corporation includes the radio engineering concern “Vega”, the concern “Constellation”, the integrated structure “Management Systems” and the Central Research Institute for Economics, Informatics and Control Systems. The corporation unites 55 enterprises and scientific organizations of the radio-electronic industry of Russia with the total number of 39,5 operating thousands of people.

Rostekhnologii State Corporation (Rostec) is a Russian corporation established in 2007 to promote the development, production and export of high-tech industrial products for civil and military use. It includes 663 organizations, of which 9 holding companies in the defense industry complex and 5 - in civilian industries are currently formed. Rostec organizations are located on the territory of 60 subjects of the Russian Federation and supply products to the markets of more than 70 countries. Rostec's revenue in 2013 amounted to 1,04 trillion rubles, net profit - 40 billion rubles. Tax deductions to budgets of all levels exceeded 138 billion rubles. 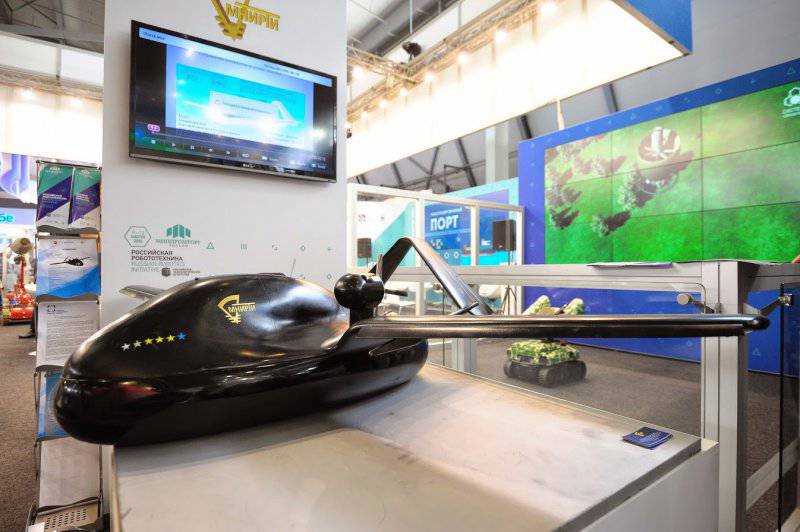 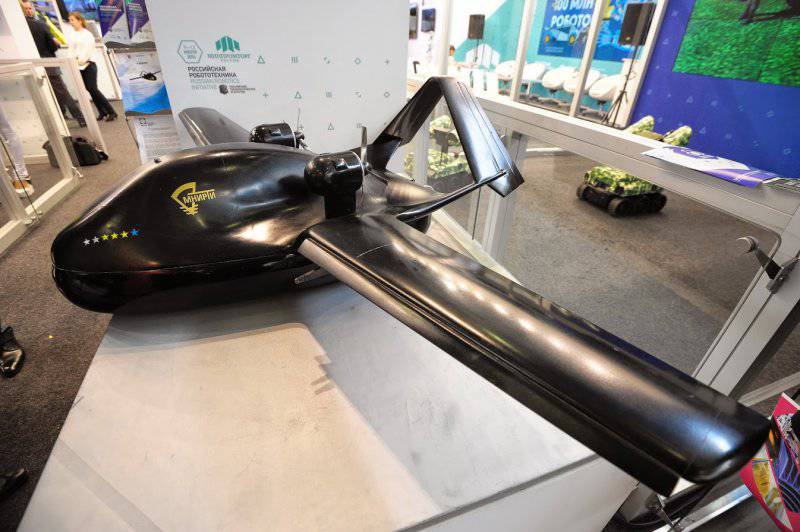 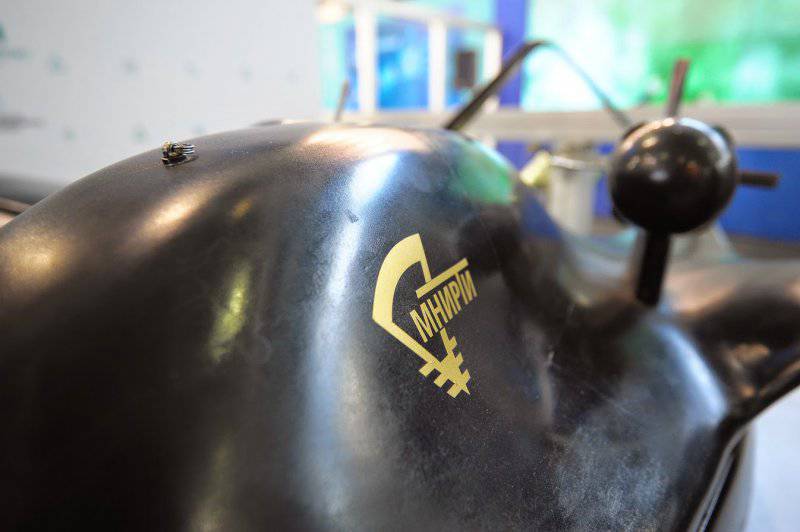 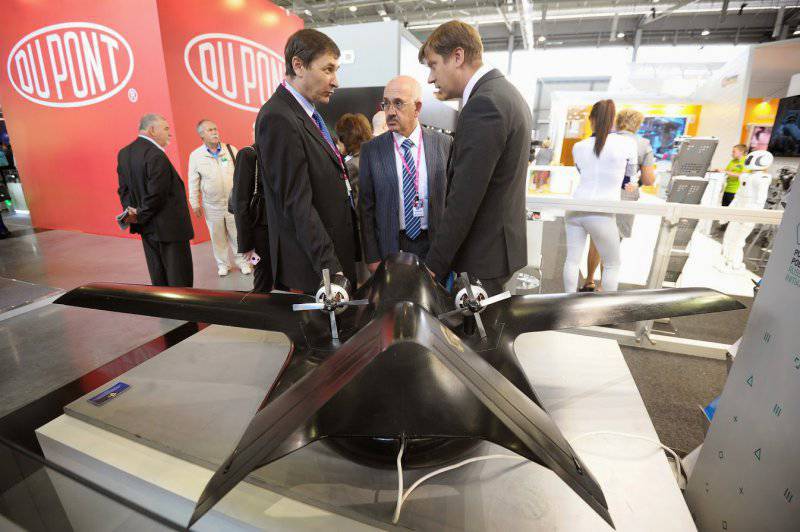 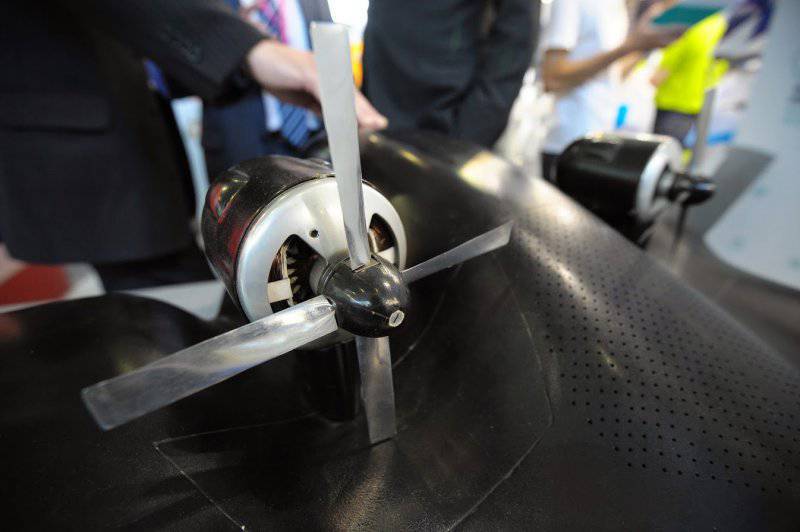 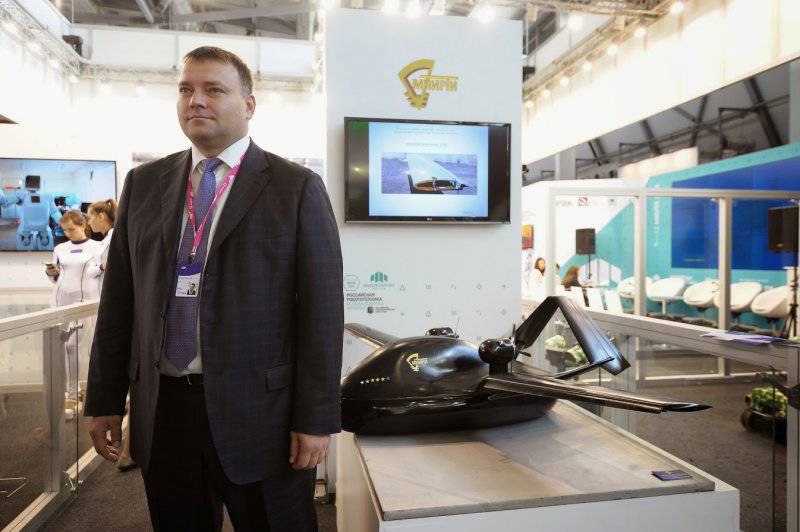 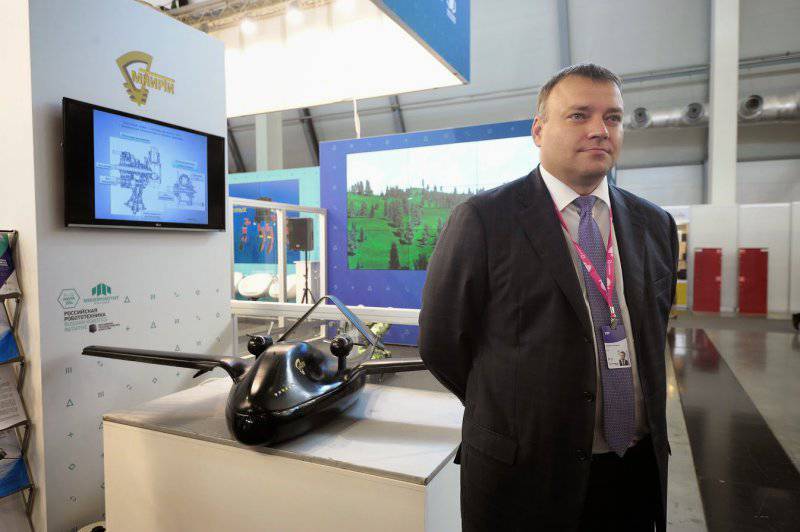 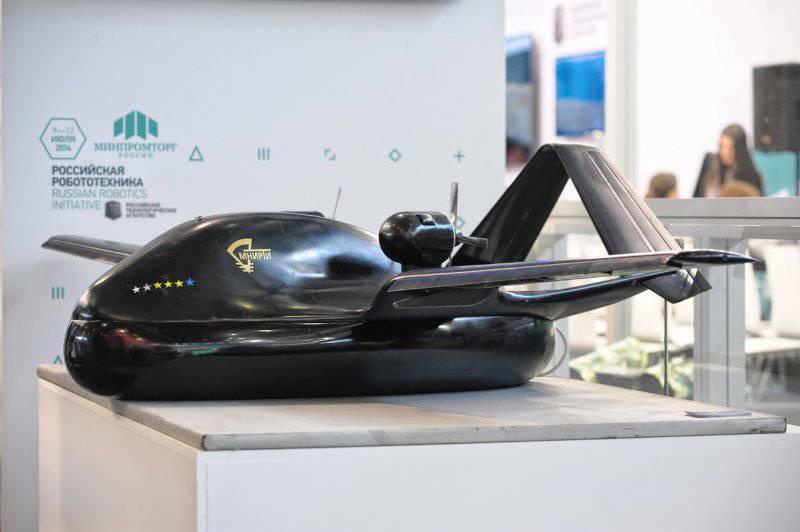 For what purposes is created Teal UAV? How exactly can it be applied?

This is a dual-purpose device designed for monitoring the earth (water) surface, as well as for transporting a target drop load (bombs, missiles, high-precision projectiles). The military version of "Teal" is designed for reconnaissance and use as a drone drone. He is able to solve these problems automatically.

In the civilian sphere, the Teal UAV can be used for various types of monitoring (for example, monitoring the fire situation in forests, the situation on roads, disaster areas, patrolling the territory).

What advantages does this UAV have?

According to its key characteristics, the UAV is not inferior to foreign analogues, and in some respects it has several advantages. In particular, the creators of the device abandoned the traditional methods of launching the UAV and used an air cushion landing gear. Due to this, “Teal” can be operated in places where there are no normal runways and unpaved prepared platforms.

Usually, a UAV weighing from 200 kg or more is launched into the air using catapults, or runways. At the same time, the ground must withstand a pressure of at least 4 kg per square centimeter, which significantly limits the possibilities of using conventional drone-less. Unlike traditional UAVs, “Teal” is able to take off from virtually any site - from water, wetland, soft ground, loose snow, etc. It can move on surfaces that have significant irregularities (for example, hummocks up to 20 cm in height and holes up to 1 m wide). There are no devices with similar characteristics today on the world market of UAVs.

In the military sphere, the advantage of this UAV is also the fact that it carries weapons not on a suspension - the design of the device allows you to hide weapons in the case. This reduces the visibility of the UAV, improves its aerodynamic properties.

What are the technical characteristics of the UAV?

The maximum weight of the first version of the "Chiro" is 700 kg, the maximum weight of the payload (capacity) is up to 300 kg, the device is capable of carrying various optical-electronic equipment. "Teal" rises to a height of six thousand meters, the range is up to 2500 kilometers. Despite the “awkward”, at first glance, form, tests of the UAV in a wind tunnel demonstrated its good aerodynamic quality.

At the moment, the military-industrial complex is working to further improve the technical characteristics of "Teal".

Many Russian drones are based on foreign technology. "Teal" - is no exception?

The device is fully developed by specialists of the United Instrument-Making Corporation Rostec State Corporation. It combines the latest achievements of engineering thought from different areas: radio electronics, aircraft industry, chemical industry. The technologies used made it possible to build a truly modern aircraft: lightweight, durable, with high performance, despite its impressive dimensions. The wing span of the Teal UAV is 10 meters, while the maximum take-off weight does not exceed 700 kg. The device has an all-composite (carbon) case. The air cushion membrane is made of ultramodern material, which was developed by Russian specialists, the production technology of this material is our know-how.
Ctrl Enter
Noticed oshЫbku Highlight text and press. Ctrl + Enter
We are
Innovation Day of the Southern Military District: Pictures from the ExhibitionThe action “Military service under the contract is your choice!” In Rostov-on-Don: future contract servicemen, exhibitions and “Russian Knights”
Military Reviewin Yandex News
Military Reviewin Google News
84 comments
Information
Dear reader, to leave comments on the publication, you must sign in.