29 2011 June
3
The fifth international naval salon IMDS-2011 opened in St. Petersburg. It is full of interesting exhibits and real sensations.


The International Naval Salon (IMDS-2011) is held for the fifth time. This year, according to the organizers, it became a record one, beating even Euronaval in France on a number of indicators. In addition to a large number of participants, including foreign ones, there are many real discoveries in the field of naval equipment and technologies.

Salon opens like twice. In the evening of June 29, a chamber opening ceremony for VIP guests and a ceremonial banquet corresponding to the event. On the morning of June 30 - the grand opening, accompanied by a colorful show, which takes place on the territory of the Lenexpo exhibition complex. However, I must say, active work at the salon began on Wednesday morning.

Forty ships and boats are represented on the IMDS-2011, including three foreign frigates — the American and rather old Carr, the German, which is newer — the Hamburg and the Van Amstel from the Royal Netherlands Navy. More than 90 delegations from twenty-nine countries work at the salon. 410 enterprises show their products, of which 67 are foreign.

One of the main sensations of IMDS-2011 is not far from the pier and, it seems, does not represent anything special. Two standard sea containers - one large, the other smaller. But what is the filling of these containers! This launchers missiles "Club". They can accommodate the best in the world according to their characteristics of the 3М-54Т, 3М-54ТЭ1 and 3М-14Т missiles, as well as the X-35Э. The range of their flight is more than 200 kilometers, they are capable of striking both sea and land targets.

For the first time in the form of posters and models, this complex was shown only two years ago at one of the foreign salons. We must pay tribute to the team of the Moscow Concern Morinformsystem-Agat, which in just two years has transformed the beautiful design into metal, into a real combat system. The premiere of the ready-to-test container "Klaba" was held in St. Petersburg, at the IMMS-2011 showroom.

The highlight of the new complexes is that the missiles are not placed in combat modules with characteristic outlines, but in standard transport containers. They can be installed not only on special ships, but also on heavy wagons, on railway platforms, simply on the ground, well disguised. And any aggressor will receive a crushing blow where he is least waiting for him.

The main exhibitor of IMDS-2011 is the United Shipbuilding Corporation (USC), which unites fourteen shipbuilding enterprises, design offices and centers.

For the first time, a patrol ship of the new generation of the 22460 project was shown at the USK exposition. A full-scale sample of the Tornado patrol boat is shown for the first time. It is made in Zelenodolsk and has already been adopted by the Russian Navy. The frigate of the 20382 "Tiger" project, manufactured using the "Stealth" technology, has received increased attention.

On the eve of the opening of the salon in St. Petersburg, USC held the First All-Russian Industrial Design Competition in shipbuilding under the motto "Building a fleet of a strong country." The models of the ships of the future that won the competition are also shown on IMDS-2011, and they arouse the keen interest of the participants and guests of the cabin.

The French corporation DCSN brought to the salon not only the Mistral model, but also the model of the promising nuclear submarine Barracuda. The submarine looks spectacular. However, the world's best titanium nuclear multipurpose submarine Barracuda was already built in our country twenty years ago in Nizhny Novgorod, and is still in operation of the Northern fleet.

By the way, a joke is popular at the salon: the children of one of the “skillful hands” circles in St. Petersburg built a full-size model of the Mistral helicopter carrier.

If we talk about this French universal landing ship-dock, then in the open area there are two combat helicopters that can be based on it. These are the Ka-52 shock and Ka-29 airborne.

A very interesting exposition of corporation "TRANSAS". The fleet cannot do without its products. Only here they are able today to develop and produce complex simulators that completely imitate the control of ships of various types. And while a new ship is being built, the crew may well already learn to maneuver in difficult conditions and sail on the waves in different latitudes. It is not in vain that USC President Roman Trotsenko stressed the importance of cooperation between the corporation he leads and TRANSAS.

As part of the cabin for the first time in stories NATO outside this block began a retreat of the arms group. The group includes 60 high ranking naval officers from various countries of the North Atlantic Alliance.

Congratulations to the organizers and participants of IMDS-2011 sent by President Dmitry Medvedev. 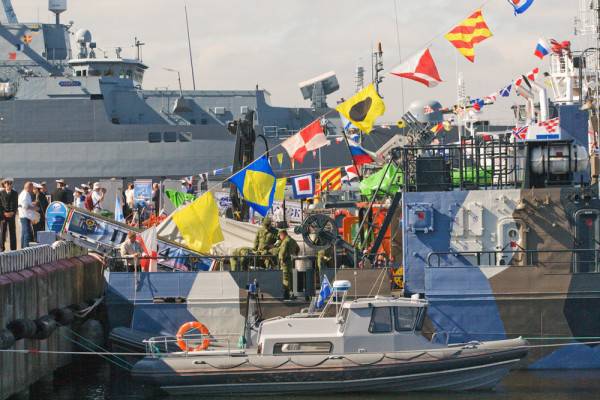 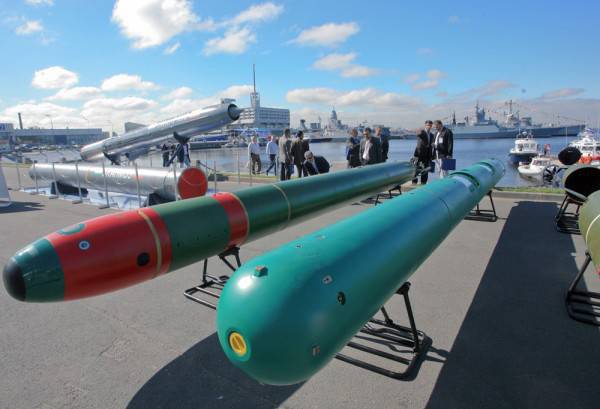 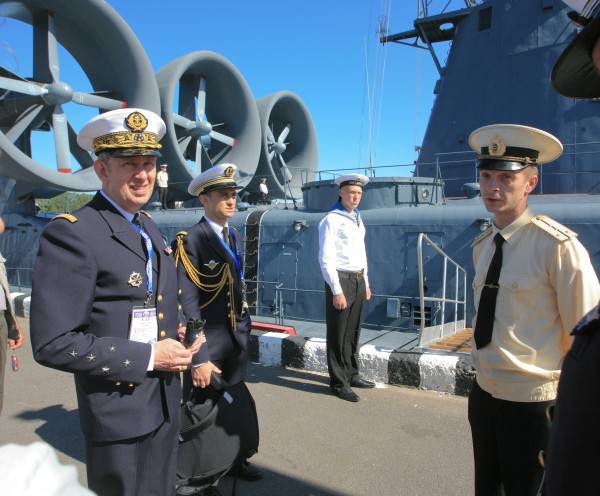 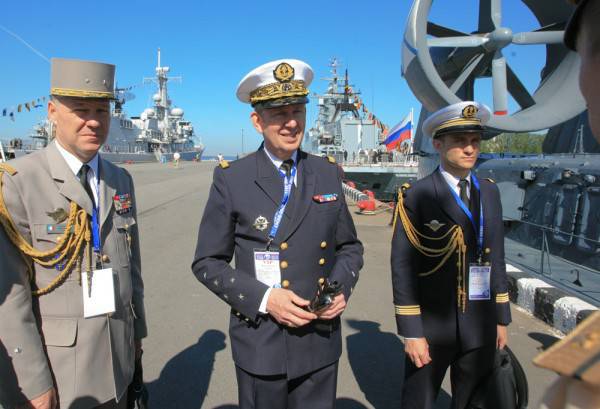 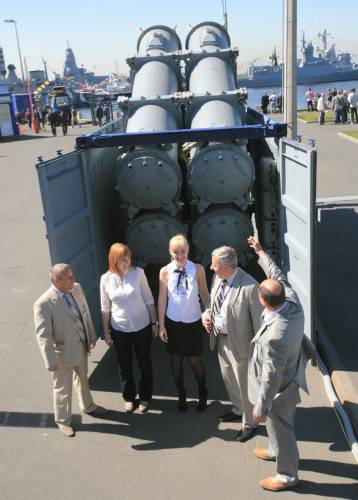 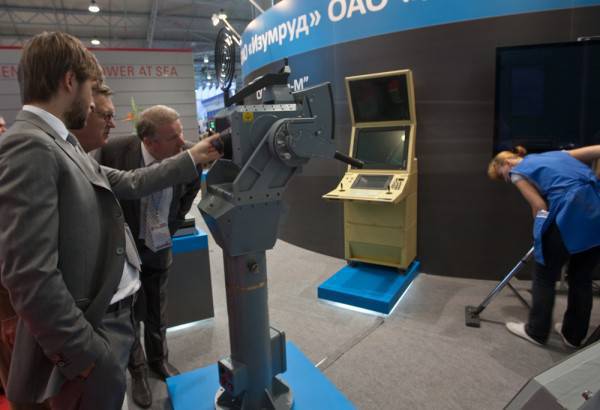 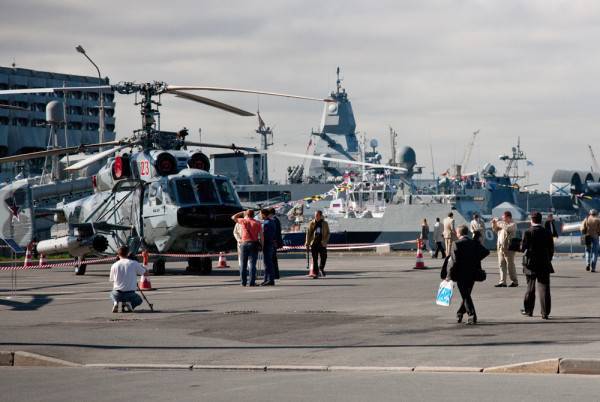 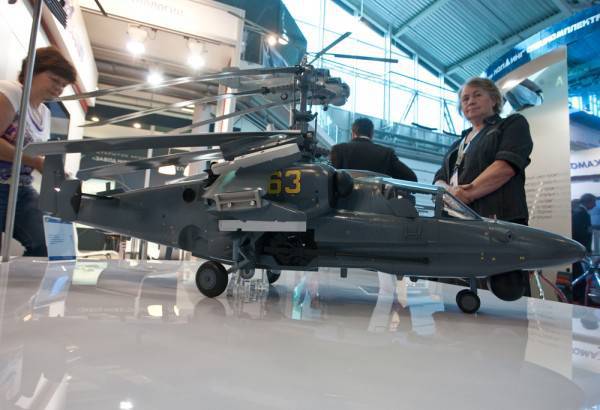 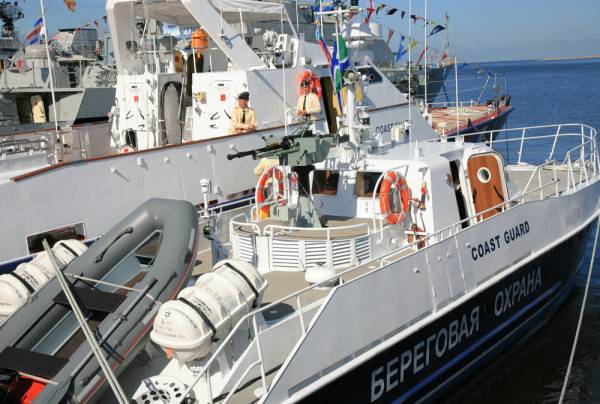 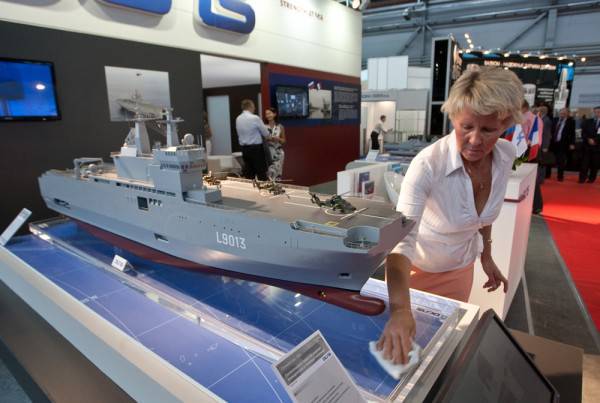 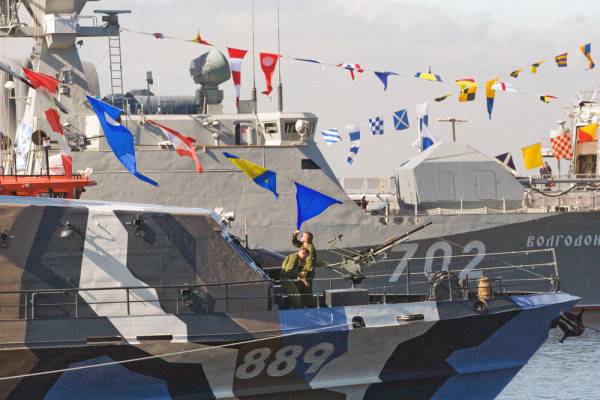 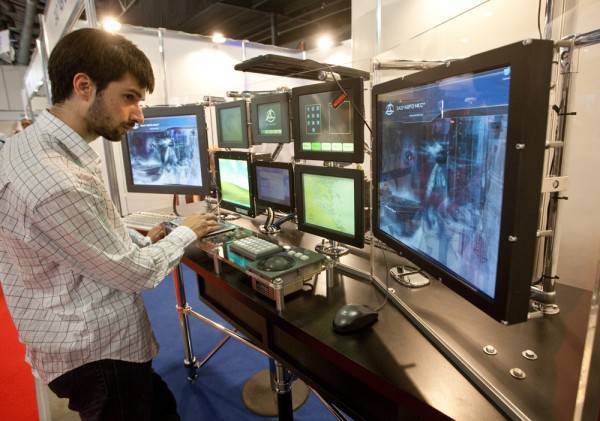 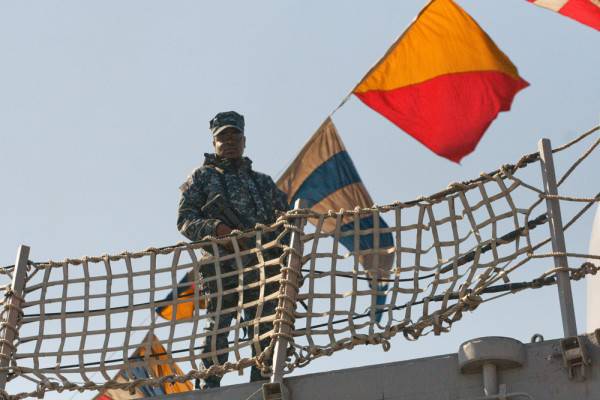 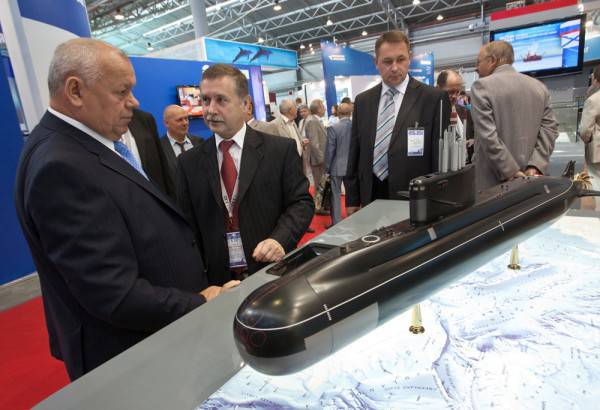 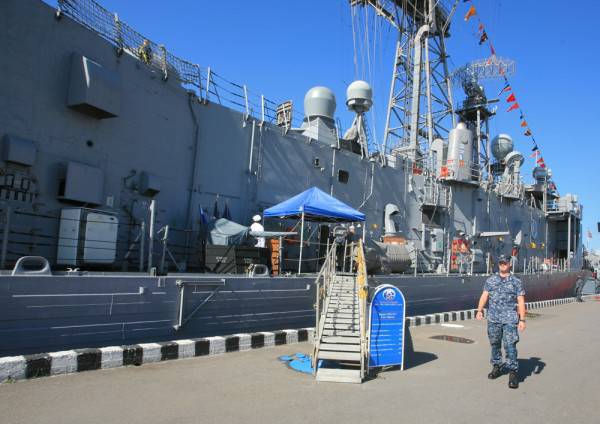 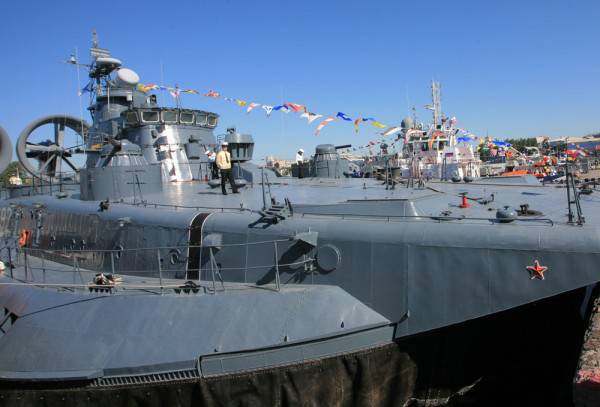 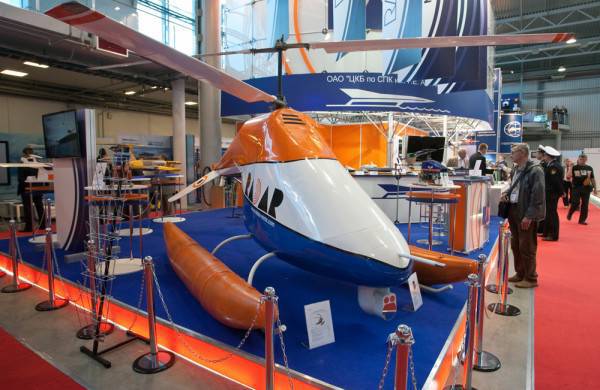 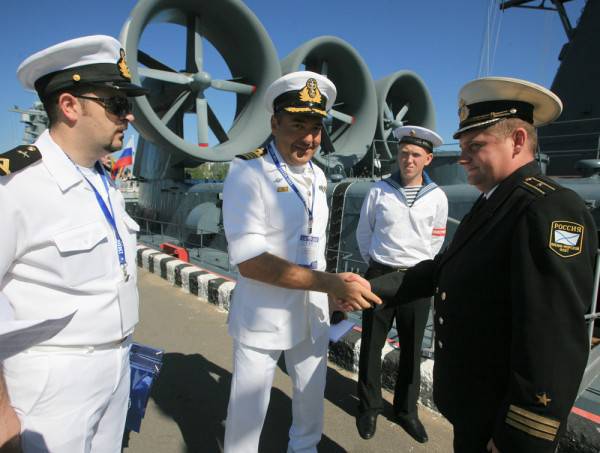 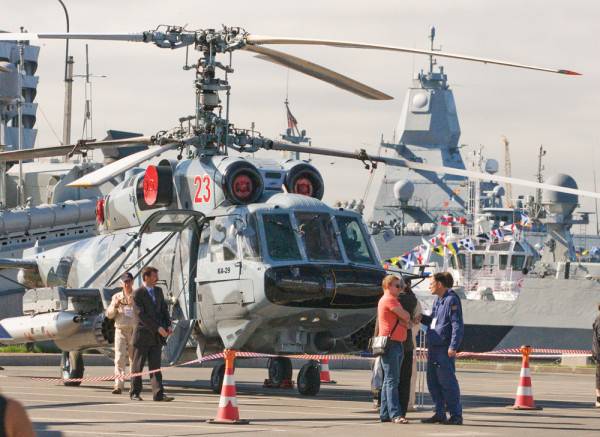 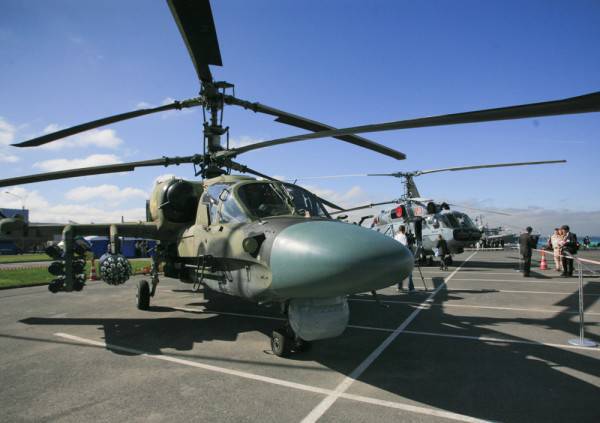 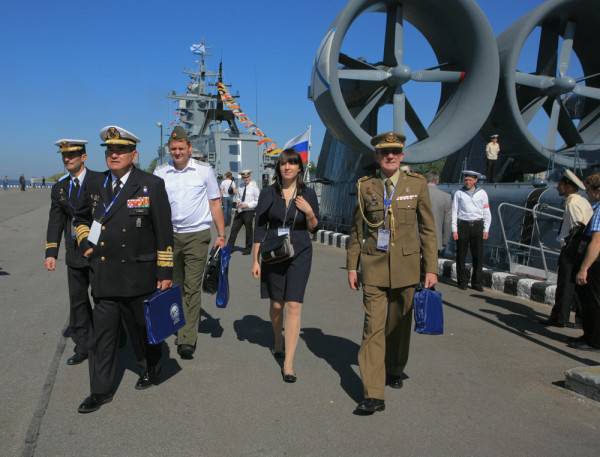 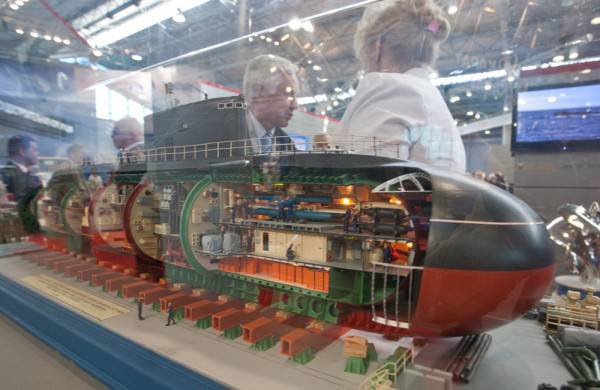 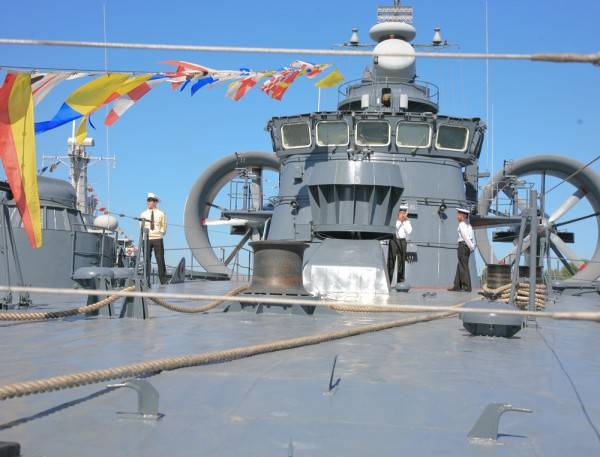 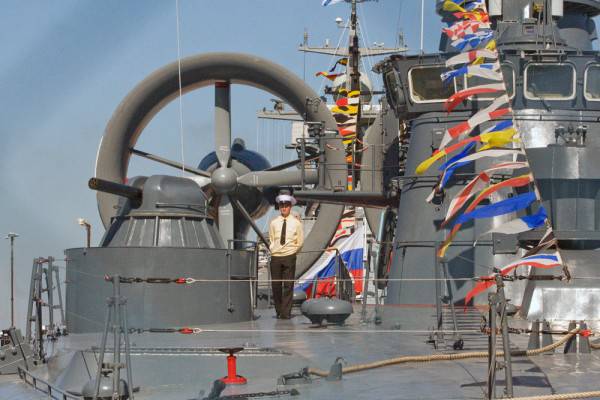 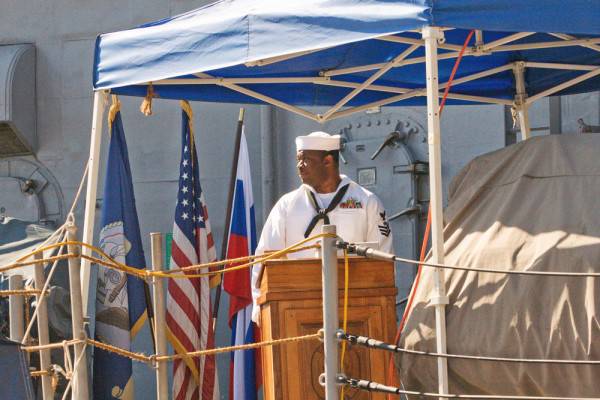