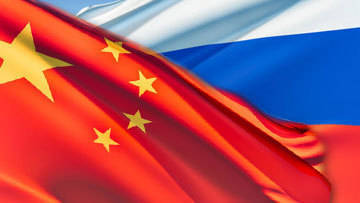 During my last visit to China, I asked Chinese thinkers and researchers how they envision and think about Europe, about Russia, about Putin-Medvedev dynamics and about the post-Soviet space.


In fact, they all spoke very positively about Russia. Despite the lack of trust between Beijing and Moscow, relations seem to be better than at any other time in modern times. stories - economic and economic exchanges are growing (increased by 43% in 2010, reaching 55 billion dollars), and China’s border with Russia is one of China’s most stable borders. But if you dig a little deeper than the surface, the picture is no wonder more mixed. And not necessarily encouraging for Russia. As the Chinese say, the relationship is good, because "we know that when two tigers fight, both are very likely to be injured, and we want to avoid it." This is hardly a positive way to start a partnership.

China and the collapse of the USSR

My colleague and I asked the Chinese what they thought about the collapse of the USSR. Here is the answer we received:

“We had big debates about whether this is good or bad for China. Some representatives of the ideological front said that it was bad, because it undermined the attractiveness of communism. But pragmatists said it was good for China. And this is true, after the collapse of the USSR, we have very good relations with Russia, better than ever before. ”

The unsigned part of the answer is, of course, the fact that “better than ever” relations are built on a very different balance of power, and Russia is much weaker than the USSR was. As I wrote earlier, the Chinese views on the post-Soviet space are not very different from those on Europe or the United States. They differ stylistically (China is more respectful of Russia), but not in substance.

It is also obvious that the stronger China became, the better relations with Russia became. Another Chinese also suggested that Sino-Russian energy relations were “unblocked” by the economic crisis, when Russia's need for money opened the way for 25 billion dollars worth of “loan-for-oil” deals. The Chinese professor put it this way: “How can you sleep when you sleep with a man who is bigger than you?” This applied to the USSR, but not to Russia.

Is Russia included in the BRIC?

“The BRIC Summit discusses how and when to deprive the US dollar of the status of a global reserve currency. After long days of discussion, the leaders of the BRIC countries decide to go and ask God about the prospects for their currencies to become global reserve currencies. The first to go is Dilma Rousseff (Dilma Rousseff), the president of Brazil - she asks God when the real will become a reserve currency. After a few minutes, she returns in tears. Her colleagues from the other three BRIC countries ask: “What happened?” “God said that I would not live to that moment,” she explains.

Manmohan Singh goes to ask God when the Indian rupee becomes a global reserve currency. Like Dilma Russef, he returns after a couple of minutes in tears. God told him that the rupee would not become a reserve currency during his lifetime.

Then Medvedev goes to God. After a couple of minutes, Medvedev returns completely calm. Others ask him what happened, and Medvedev replies: “I asked God when the ruble would become a global reserve currency ... and God began to cry. I asked him what had happened, and he answered me that during his lifetime this would not happen ... "

(I heard the same joke about corruption in Romania). The joke is somewhat funny, but it shows well how many Chinese perceive Russia.

Exactly as the United States and the European Union almost shamelessly and brazenly prefer Medvedev to Putin, the Chinese likewise prefer Putin to Medvedev. We asked why. One of the answers was: "Medvedev is pro-Western, and Putin is pro-Russian." Another Chinese regrets the times when Russia was at the forefront of opposition to the United States. As one Chinese intellectual explained, “It’s difficult for China to stand alone against the United States. But with other forces we can do it. Earlier, when Putin was president, Russia was much more active in the UN Security Council. But after a reboot of US-Russian relations, we have to be smarter, holding our views in the UN. We don't want to face American pressure on us. ”

Many of them, however, emphasize that before “Libya” they didn’t pay much attention to Putin or Medvedev, but that Russia did not use the veto over the resolution on Libya, and also the clash between Medvedev and Putin on this issue made them think that Putin is “closer.”

“Because Medvedev did not veto UN Security Council resolution number 1973.”

“But China didn't block it either?” Medvedev did the same thing as China, so why do you say that Putin is closer?

It sounds almost illogical that China, which has always had an attentive, calm and emphatically non-aggressive diplomatic style, lacks Putin’s tirades in the style of the Munich speech. But then these speeches allowed China to take the best of both worlds - to cooperate with the United States and at the same time enjoy Russia, which is leading the opposition to the States.