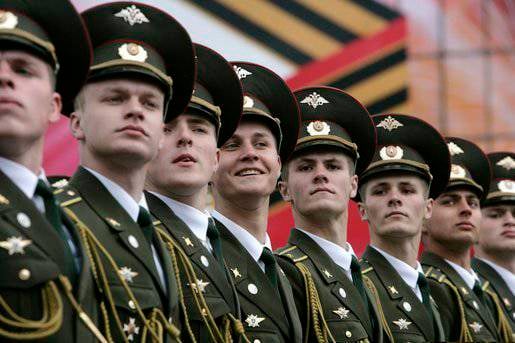 Attempts to popularize the army in the eyes of draftees on our television have been undertaken with varying intensity for many years. From time to time, various series about the life of the army are filmed and soulful songs are thought out, under which captions float across the screen. Very good actors are often involved in the shooting. And to no avail - the popularity of the army as it was not, and no. The people are watching, but they are not in a hurry to join the army, understanding the difference between the serial and real services. It is about the same as between circus and life.

But the television authorities, together with the Ministry of Defense, is not aware of it. Therefore, according to many media reports, it was decided to strike recruits from the main television caliber for this audience - a reality show like “House-2”. In fact, who watches TV shows? For the most part, housewives, and they are as far from service as they are from the moon. Do not call us women, neither young nor, especially, elderly. But "House-2" looks exactly young people, here the market niche is defined with maximum accuracy. But this is where the accuracy ends, some miscalculations go further, which are already visible now, even before the project starts.

The show called "Army" is scheduled to launch on Channel One in July. But the principle of recruiting participants will not be the same as in a commercially successful prototype. No casting - participants simply appointed from among the "stars" of show business, sports and politics. Something tells us that there will be more popsists there than others, because there are not so many young famous politicians and they are hardly recognizable for teenagers. And athletes need to train. Total participants will be about twenty, which is enough for two army tents.

No houses for them were decided not to build, but to do with tents, and this indicates that the project is low-budget or that the participation of famous “soldiers” is expensive, but you need to save.

The fact that there will be at least two tents is clear from the fact that, as announced, not only boys but also girls will take part in the show. This is the second stretch of the project - women, as already mentioned, are not subject to appeal and their participation in the project is dictated only by the need to create a love affair.

In fact, the participants of House-2, in accordance with the concept of transmission, build a house and love. The second is more than the first. And the participants of the “Army” at home, that is, the tents, will get ready, and they will only have to build love and simultaneously shoot back and forth from the fighting weaponsthat they will be provided along the way. It is reported that it will be not only machine guns, but also grenade launchers with tanks (I would not want to have a summer house next to the filming of the “Army.” - Approx. Aut.). However, real officers will be instructing stuffed soldiers and soldiers, and this allows us to hope that no accidents will happen.

It is also not difficult to imagine the structure of the future project: morning shooting, afternoon rest, evening shuras-muras. A sort of army skewer for beer, in no case able to compete with football.

The shooting range of the Taman Division in Alabin near Moscow will serve as a shooting area. During the week building materials, workers and television equipment will be delivered there.

The show will launch in the evening prime time. It will be in the same company with "Star Dance" and "Ice Age", a source on the TV channel. The list of participants and hosts is kept in the strictest confidence.

A headache for the organizers is to determine which of the army standards will pull the pampered "stars", and which ones should be discarded. And, of course, as already mentioned, the main thing is that they do not hurt themselves with real weapons and do not hurt others. It is known that not all of them served in the army, and a face for shooting, nevertheless, all sorts of things can fit.

Last year, for example, Vladimir Zhirinovsky offered Timati his help in arranging that one for the army. As is known, the military enlistment office rejected the artist for the reason that he has more than 50% of the skin covered with tattoos. Vladimir Volfovich thought that this was in vain and one-year service would only increase Timati’s popularity among fans.

It should be noted that evidence of this is available. At one time, service in the army raised Elvis Presley to the top of popularity. True, there he was addicted to psychostimulants, which later killed him. But that is completely different история, and the army there was real, not television, as in our case. So, it would be very interesting to see Timati in the project. Maybe they will take him there?

Now about life and believability. It is very curious whether the “stars” will leave home after filming or will they live in tents? Will they be trimmed according to the army model or will they be allowed to walk in stubble and putty? Small detail, and for reliability it is important.

Most importantly, will they show hazing in the show or will they pretend that it is not there again? Will there be "perfume", "scoops", "demob", as it is in real life? Will we see officers who are not responsible for ordering the barracks? Will the "stars" eat real soldier food from cereals, dried potatoes, poor-quality stews, or will they be brought meals from the nearest Italian restaurant?

It is also a pity that the project will come on television screens just now, not two years ago. Then the dwarf Vovchik, an excellent comedian, was still alive and actively filming. He would have fit this project very well and could have played the tent commander here. With the total number of stretchings and conventions, this would not in the least damage the credibility of the “kin,” and perhaps even strengthened it. And in this case the announcer for deaf-and-dumb spectators would look very organically in the corner of the screen. Oh, they would surely believe everything that happens. Because real draftees, it seems to us, will not believe it, and the mere possibility of firing from combat "pukalok" into the army will not attract.

We are in Yandex Zen
About Stalin and Khrushchev
Functional stupidity and national stupidity
6 comments
Information
Dear reader, to leave comments on the publication, you must to register.