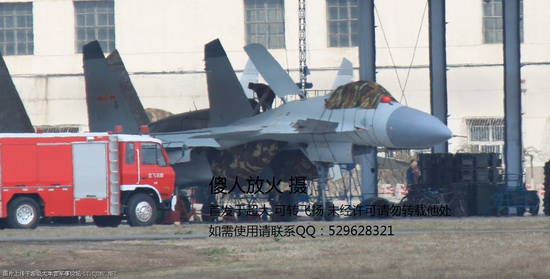 United States Naval College Associate Professor Andrew Erickson and security expert Gabe Collins published an article analyzing the capabilities of the Chinese J-15 Flying Shark carrier-based fighter, the first official photos of which appeared 24 in April of this year. The plane was photographed at the plant's airfield No. XXUMX of the Shenyang Aircraft Corporation (translation is given with abbreviations).

J-15 was created on the basis of the Russian carrier-based Su-33 combat aircraft, but has more advanced avionics, reduced vertical tail, elevation, and more powerful chassis. The absence of a second cockpit on an aircraft may mean that the aircraft’s on-board equipment is fairly modern, integrated and automated (the electronics may be largely similar to those installed on the J-11B, which in turn is a compilation of the Su-27SK). In addition, the second cabin can cause great aerodynamic resistance during take-off from the springboard. The first prototype was assembled in the 2008 year, the first flight was 31 August 2009, the first take-off from the ground springboard was dated 6 May 2010 (Yanlian air base, Shaanxi province).

The combat capabilities of the aircraft will be limited by a springboard take-off and the absence of deck-based tanker aircraft. To increase the combat radius of these aircraft will depend on land-based air tankers. The normal take-off weight of the aircraft can be comparable to the same parameter of the F-14 Tomcat fighter aircraft, which was deactivated by the US Navy. The capabilities of J-15 will increase significantly if it is equipped with a radar with active phased array, which will allow it to conduct a more secretive flight, fight low-flying cruise missiles and have a great potential for EW.


Airplane glider holds a large amount of fuel. Even during a springboard take-off, the aircraft can have a 700 km combat radius, and the PL-12 air combat missiles can increase its strike range by another 100 km. In close combat, a fighter can also be a very dangerous enemy, given the low unit load on the wing and high thrust-to-weight ratio. 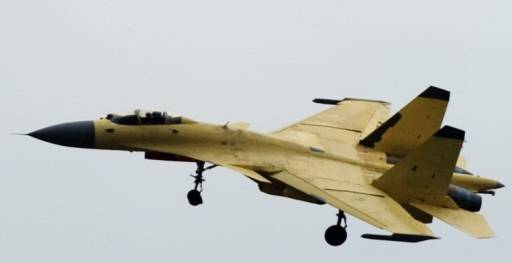 1) Develop an aircraft ejection system. Springboard requires a reduction in fuel mass and combat load. China faces a shortage of air tankers, especially considering the problems that arise when purchasing Russian-made Il-78 tankers, which are used to refuel the Su family, on the basis of which J-15 was created.

2) Strengthen the chassis of the aircraft, which should compensate for the hard landing, otherwise it can lead to great damage on the deck of the aircraft carrier. The heavier the car, the greater the load on the glider.

3) It is necessary to create a deck-based AWACS aircraft, similar to the E-2 Hawkeye, used on American and French aircraft carriers.

4) China needs to create promising long-range air-based and long-range air-to-air missiles to compensate for the limited radius of deck-based aircraft taking off from the springboard. For example, to create rockets with a range of 300 km - UR classes K-100 Novator or P-37 Pennant, supersonic KP Bramos.

5) If China does not want to depend on Russia in the production of deck fighters, it must start mass production of its own WS-10 engine, and for this it is necessary to solve the problems with the safety of the RDDF. Many analysts believe that the J-15 prototype is equipped with Russian AL-31F engines. China has the potential to modernize and overhaul them.

6) It is realistic to expect the creation of a modification of the thrust vectoring engine. It may be that work will be done to reduce the EPR of the aircraft by changing the design of air intakes and other systems. Most likely, over the next five years, the aircraft’s avionics will be upgraded.

7) How many PLA Navy J-15 have plans to purchase? It is believed that at first only helicopters will be based on the Chinese aircraft carrier.

8) It will be interesting to see if the Chengdu Aircraft Industry Group creates the deck version of the J-10 fighter as an addition to the J-15. Rumors about the creation of the deck version of the aircraft have been circulating on the Chinese Internet for several years, but so far there is no concrete evidence of this work. Delta-wing aircraft can be operated from the deck of aircraft carriers, but they require substantial structural reinforcement. Perhaps when China creates an ejection launch system, such an aircraft will be created. A good example is the French fighter Rafale C, which has both ground and deck versions. A two-engine deck version of the J-10, equipped with Russian RD-33 engines or Chinese WS-13, can be created. These engines are mounted on the export fighter FC-1 / JF-17. The aerodynamic characteristics of such an aircraft are likely to be close to the parameters of the Rafale.

Thus, the creation of J-15 should not be seen as aimed at solving specific goals, but rather as part of the long-term development plan of the Chinese Navy, which seeks to create more reliable opportunities in the long term.

Ctrl Enter
Noticed a mistake Highlight text and press. Ctrl + Enter
We are
A brief photo essay about the largest US Air Force aircraftAn-12 in Afghanistan
10 comments
Information
Dear reader, to leave comments on the publication, you must to register.