The situation in the South China Sea is heating up 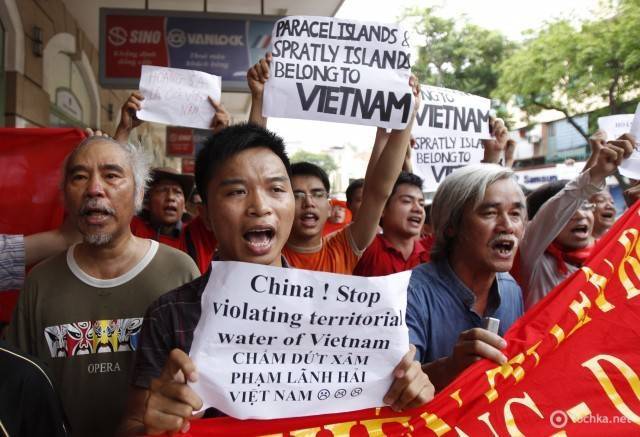 Tensions are rising in the South China Sea - the Paracel Islands and the Spratly archipelago are again causing discord among several states. Vietnam protests against China’s unilateral actions in the area of ​​disputed territories. The government of the Philippines has accused the PRC of undermining peace and stability in the region, as well as violating the territory of the Philippine state. The United States promises Manila to provide urgent military assistance.

The aggravation between Vietnam and China began with the fact that Chinese border guards prevented the work of the Vietnamese vessel, which carried out reconnaissance work at the bottom of the South China Sea, in 120 km from the coast of Vietnam.

The Vietnamese authorities protested and demanded that “the Chinese side refrain from actions that cast doubt on the sovereign rights of the Socialist Republic of Vietnam to its exclusive economic zone and territorial waters.” According to Beijing, everything was the opposite: a Vietnamese ship invaded the Chinese territorial waters. Chinese Foreign Ministry spokesman Jiang Yu said that “the Vietnamese side conducted oil and gas operations in the marine area over which China has jurisdiction, which damaged Chinese interests and rights to jurisdiction in the South China Sea and contradicts the agreements reached between the two countries on South China seas". Beijing also protested on this.

In Hanoi, they said that they intend to protect their territorial waters with the help of NNLS built in the Russian Federation - the contract for the supply of 6 submarines was signed in 2009 year. The Vietnamese ordered Varshavyanka-type naval submarines, the amount of the contract was 2 billion dollars. The first submarine should go to the customer from the Admiralty Shipyards in 2013. Vietnamese Defense Minister Phung Quang Thanh said: “We will never encroach on the sovereignty of other countries. But we must stop anyone who tries to encroach on Vietnamese sovereignty. ”

In addition, Vietnam conducted its military exercises in the East (South China) Sea in the 200-mile zone, which caused irritation in Beijing. The National Assembly of Vietnam approved a mobilization plan in case of war with China. In China, they led their forces in this direction to combat readiness and made public a message stating that there would be no war between China and Vietnam, but the “ancestral territories” would nevertheless remain beyond the PRC. In Hanoi, there were wrathful demonstrations at the Chinese Embassy. 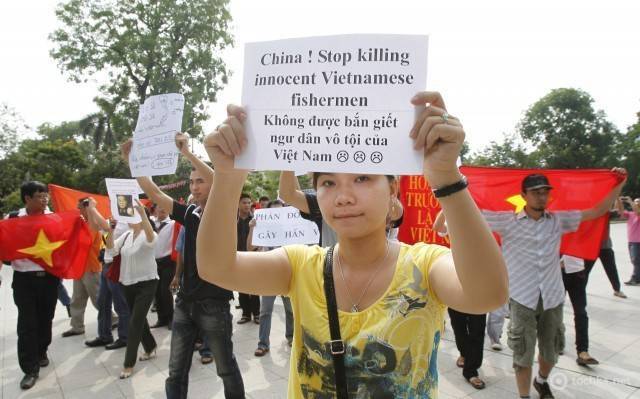 The Philippines became an ally of Vietnam in diplomatic battles and naval clashes with China. Manila recalled that in March of this year, the ship of the Chinese Navy forced the Philippine vessel out of the disputed area, which was conducting exploration of gas and oil deposits. Beijing did not respond to Manila’s protest.

Hanoi and Manila insist on convening an international conference on this issue, Beijing is against this idea. The Chinese believe that the problem can be solved in bilateral “friendly consultations”. The Philippine government intends to control at least 25% of the Spratlys archipelago and calls the South China Sea just as the “West Philippine Sea”. In Vietnam, it is called "East."

June 16 Filipinos removed foreign border markers in disputed areas - this is a common phenomenon in those regions, border guards from various countries put up their signs and destroy foreign ones. Not only Chinese, Filipino and Vietnamese participate in this action, but also representatives of other countries applying for these territories - Taiwan, Malaysia, Brunei. 17 Jun. Philippine President Benigno Aquino made an open statement and demanded that China stop invading his country's territory.

Manila understands that they alone cannot resist the power of China, so they asked for help from the United States: "China behaves like a bully, trying to establish dominance over the marine resources that are within the territory of the Philippines." During a meeting with US Secretary of State Hillary Clinton, the Foreign Minister of the Philippines del Rosario said that the country was ready to defend itself, but for this it needed “resources” that the United States should provide. Washington considers this region a zone of its strategic interests.

According to Clinton, Washington is concerned about the recent incidents and is ready to provide the Armed Forces of the Philippines with the “necessary weapons”. In addition, the provision of military assistance to Manila is included in the obligations of the United States, so, under the bilateral Treaty on mutual defense 1951, the United States and the Philippines are obliged to protect each other. Even if the aggression did not directly affect their territory. The United States and so provide assistance to the army of the Philippines: American instructors are preparing power units; Washington transmits various weapons, including boats for the Navy.

Manila has not remained aloof from the arms race, which is led by the countries of the Asia-Pacific region, also increasing defense spending, so this year 252 million dollars were allocated for the development of the Navy. But the modernization of the Armed Forces of the Philippines is limited by the financial capabilities of the state, they are small. And Manila wants to rent "fairly modern weapons" from the US.

Manila’s concern is understandable, the military forces of China and the Philippines, especially in the Air Force and Navy, are incomparable, in the event of war the Philippines is doomed. And China is not going to give up areas where the value is not in the land, which is almost nonexistent (for example, the total area of ​​the Spratly Islands is less than 5 km²), but in the hydrocarbon reserves hidden on the shelf, in bioresources and in their strategically important position. In Beijing, they believe that "the Spratly archipelago is an integral part of Chinese territory." Previously, there was no need to worry, the United States maintained a base in Subic Bey, to contain the “red threat”. But after the collapse of the USSR, the United States reduced its military presence in the region.

China’s actions with regard to Vietnam and the Philippines suggest that Beijing is increasingly feeling itself a growing new superpower, which is able to independently solve critical problems in strategically important regions. Especially in those relating to the most important interests of China - through the Southeast Sea are the ways in which resources and raw materials necessary for the development of the country flow into China.

For the US, the situation is also beneficial: you can strengthen your presence in the region, and the conflicts in Eurasia are of direct benefit to them.

We are in Yandex Zen
The Pacific front takes shape
Preliminary evaluation of the prototype of the unobtrusive Chinese fighter Chengdu J-XX [J-20]
5 comments
Information
Dear reader, to leave comments on the publication, you must to register.