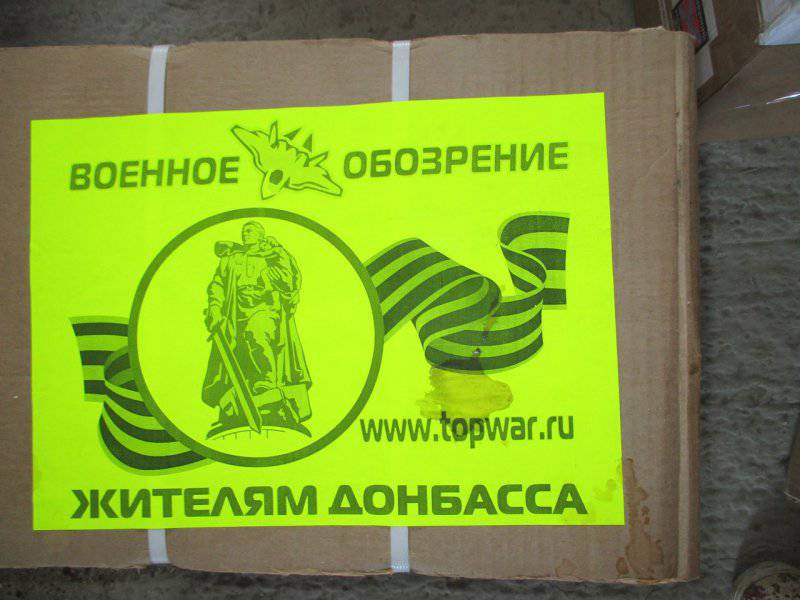 By announcing a campaign to assist the brothers in Ukraine, we did not even expect such a broad response. As of July 1, the following picture came out:

We have worked hard enough, buying the necessary, in our opinion, things. Practice has shown that the opinion was correct.

In agreement with the management, it was decided to deliver the first cargo to the warehouse itself. First, to see for yourself that this really works as they say, and second, to find out “first hand” about actual need. As it turned out, everything was planned correctly.

People with whom I initially communicated, twice could not take away from me purchased. That is in a hurry, then not enough space. It was recommended to contact the transport company, which took over the delivery to the warehouse in Rostov-on-Don, and for free. Even two. One, however, in Voronezh is not at all, and in the second I was told that they did not know anything about it, and there was no indication from Moscow on this account.

Honestly, I did not plan to go myself. With these supplies hemorrhoids turned out to be much more than expected. But - called gruzdem - get into the body. Well, we climbed. In kuzovok.

Since not all of the ordered goods came yet, but the office called “Humanitarian Corridor” twice “threw” me with delivery (which was another argument in favor of independent actions), we made it simple: we took the man a minivan, threw out all the unnecessary, (and the unnecessary there was everything except the two chairs) and hammered it under the roof.

That's what we brought. I am writing on invoices, that is, in pieces, so far it is easier.

Not very hard, but volumetric. And with this good, we declared on Monday morning to a warehouse in Rostov-on-Don. 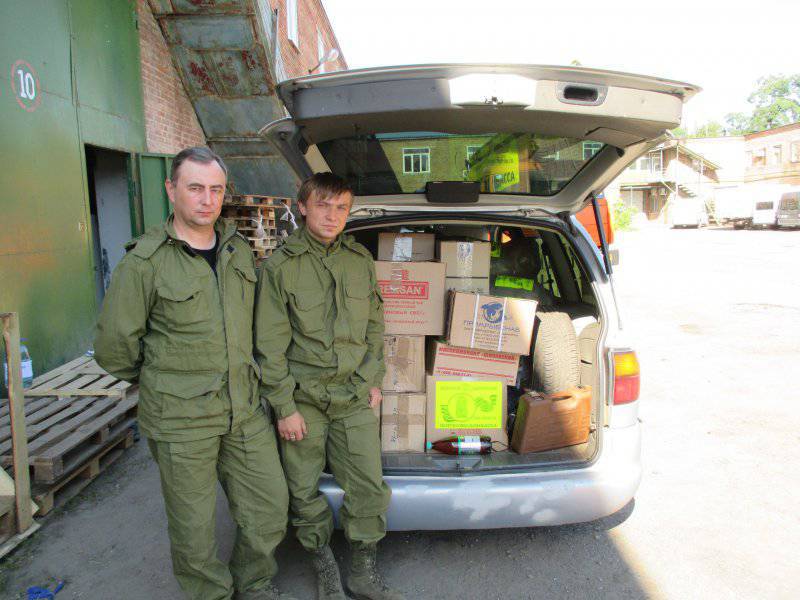 After unloading and specification of the product, it turned out that we are great. The "Military Review" got as many respects as I didn’t even expect to hear. And not because of the food. Although we tried and took only the highest grade. 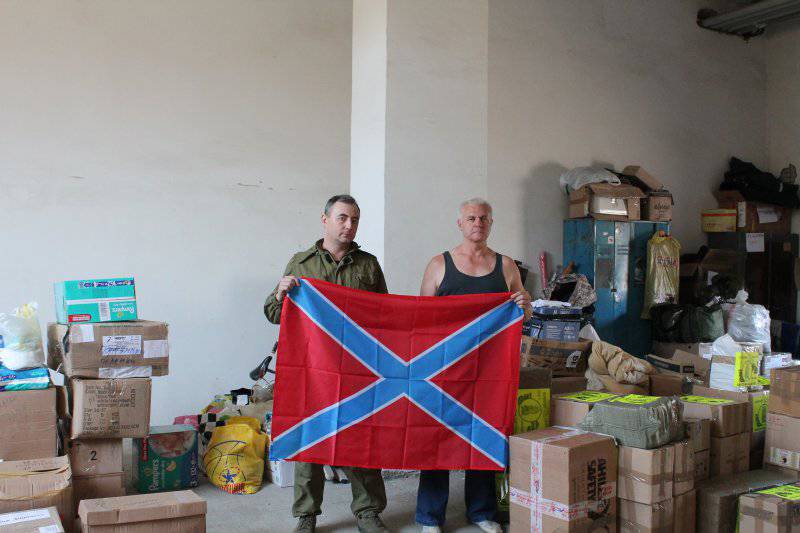 The only Russian in stock. The rest are “from there” and cameras are avoided. By the way, also our "ardent" reader

The most desirable and valuable product turned out to be ... socks. No, we suspected that it would be valuable and useful, but so that ... In short, tin. Respect, respect, "IN" well done. Separate respect was caused by the fact that our boxes did not have to be sorted and packed. Everything was taken initially by drawers, rewound with scotch tape so that not a single bank moved. Thanks to the former warehouse worker Dana, who mummified all the boxes with scotch tape. Some were not very.

After a detailed acquaintance with the fact that we dragged, and following our recommendations, we were promised that all this will be sent to Slavyansk, and nowhere else. No dispute, the load was worth it. 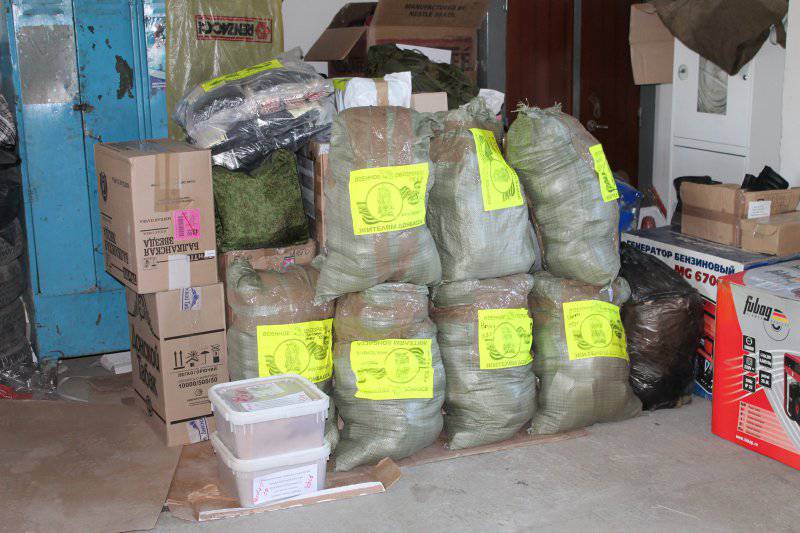 A pile for Slavyansk. In green bags - our socks

After talking with the warehouse workers, who, I note, all but one, “from the other side,” I realized that we had not come in vain. Those lists of necessities that are laid out on the Internet, to put it mildly, have time to become obsolete, or something. Fighters coming from Ukraine to the warehouse are voicing the positions they need. Further this information goes to the logistic center. And because already in the cities and villages of our country. And "topical" positions are lost in the mass.

So "Military Review" was the first to realize that a soldier needs not only canned meat and condensed milk, but also unwet legs. That is, clean and whole socks. At least sometimes. Although about the stew, we have not forgotten.

For cigarettes, too, very much thanked. And for the IRP. Yes for everything. 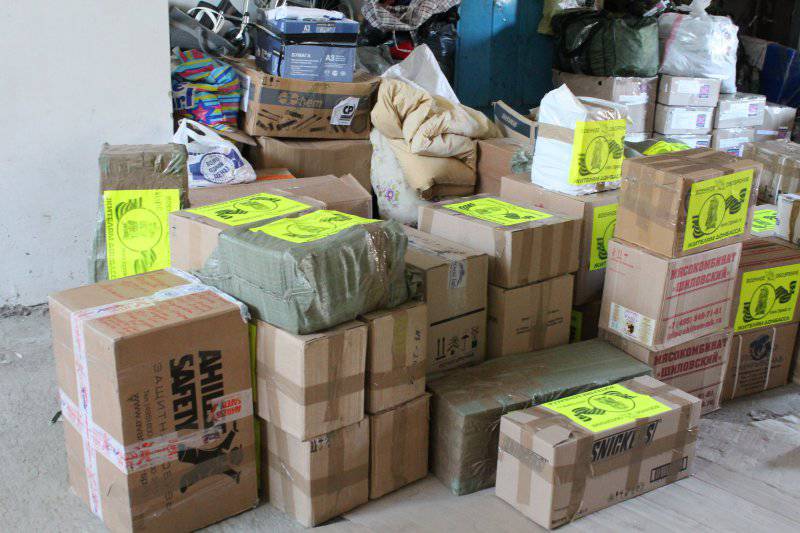 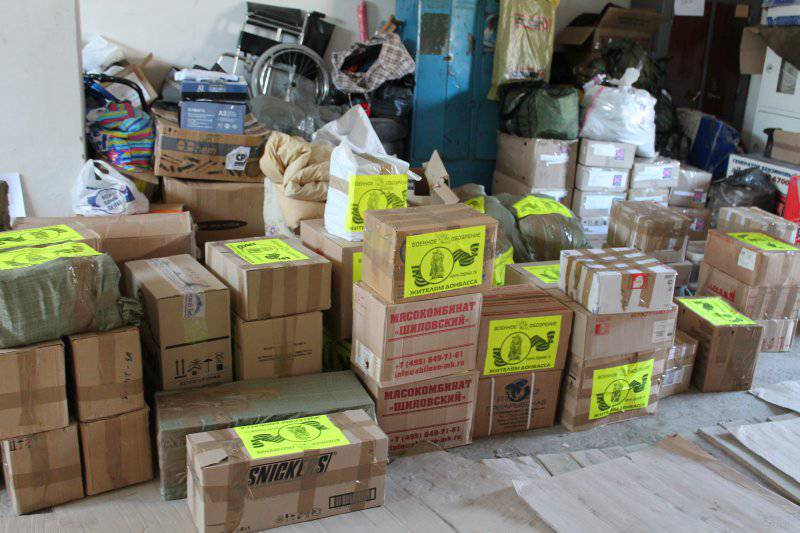 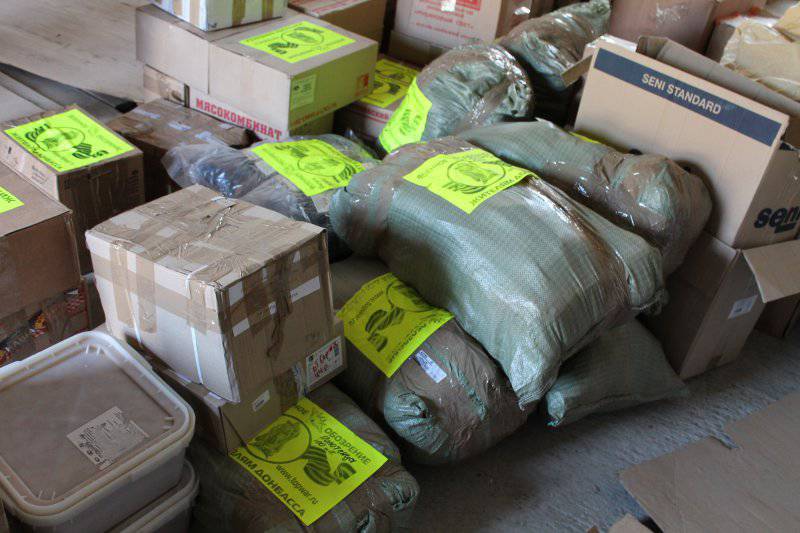 I talked to a man from the headquarters of the Brain. We were about to leave, because there was already no one to catch, although I would like to talk. But alas, a large shipment to Slavyansk took place the day before. It’s a pity, of course, but these logistics centers ... well. From now on we will act differently. And our cargo will pass from car to car.

So, Nikolai (I will not, at his request, voice the call sign for the time being) has somewhat altered our plans. He asked for emphasis on uniforms and shoes for the units being created. He said that the miners simply stripped strips from their robes, and so they go. In blue.

We talked with Nikolai for an hour, I wrote it as best I could, I wrote it down (with a pen) as a decrypt record - I’ll post it. He told a lot of interesting things about Donbass affairs.

So, after returning and reporting to the leadership, I began to plan a second trip. Already on the truck.

Now in our warehouse is still 30 boxes of food. Fish, meat, porridge, condensed milk. And 30 mailboxes with IRP. July 1 arrived. Another 225 pieces. Military and MIA. It remains to add more forms and equipment, and we will go again.

Unfortunately, letters cannot convey gratitude in terms of emotions. Therefore, I can only hope that everyone who took part in our project will be able to present them for himself. On behalf of those who received our help, I express my deep gratitude to each participant. We started a good business, we will continue it.

And those who puffed up their cheeks on the Internet, imitating vigorous activity (there were such), as well as the transport company recommended to me, which refused to carry the load, only “fi”.

“Military Review” is a force that is capable of much. And without intermediaries. 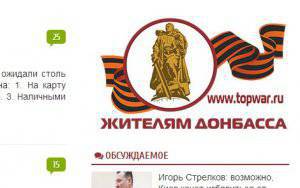 From the administrator "IN":

Clicking on the banner on the main page of the site in the right column, you will go to the previous article. This article will move there tomorrow.
Smirnov Vadim