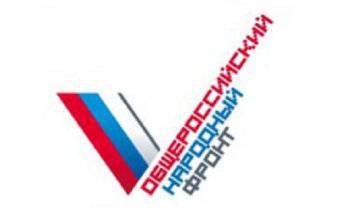 The Popular Front is at the center of a political scandal. That, however, is not surprising, because it includes trade unions, employers, farmers, and even blondes. It seems that soon the entire population of the country will find itself in the Popular Front through those or other public organizations. Moreover, many will become members of the Popular Front several times in a row, because it cannot be ruled out that the same person can be both a member of the trade union, and an agrarian, and even a blonde.


The situation when all citizens en masse are in the same political organization, only at first glance it seems funny. In fact, such cases have already happened. African dictators loved to create parties in which the entire population of the country consisted. Thus, all the people turned out to be tied by mutual responsibility. In civilized countries, even the CPSU and the Communist Party of China did not think of such a thing.

Of course, many observers say that the Popular Front is just a pre-election technology. Say, the elections will be held, and the Popular Front will be safely forgotten, as they forgot about the “For Putin” movement, which arose in 2007 shortly before the vote and either jokingly, or seriously claiming to be almost the main political force country.

However, the situation is devoid of humor. During the reign of Vladimir Putin, all the legal political institutions of the country gradually lost credibility. First, the governors of the free princes turned into simple appointees. Then the Federation Council lost its influence. Then the State Duma and the parties in it ceased to mean anything.

Finally, the very institution of the presidency has been shaken. With the arrival of Dmitry Medvedev to the highest position in the country, it became obvious that the key decisions were not made by the head of state. At the same time, the authority of the authorities did not pass to the chairman of the government, as it happens in parliamentary republics. After all, according to the Constitution, the Russian Prime Minister is a weak figure and dependent on the head of state. The post of first minister is influenced by the extent that it is occupied by Vladimir Putin.

In other words, all institutions have collapsed, and we are witnessing the process of consolidating power personally in the hands of Putin as an individual. He rules not because he is a former president, and not because he is the chairman of the government. Putin rules because he is Putin.

This type of power met in stories many times. According to tradition, it is called charismatic, leader. It is based on the idea that the leader of a country is endowed with a special talent to rule, that his “God kissed”, putting him at the head of the country. However, there is one "but."

Usually charismatic leaders, having come to power in the wake of a military coup or insane popular popularity, tend to turn their power into a traditional, legitimate one. For example, General Bonaparte, who seized power in France by force weapons, first proclaimed himself First Consul. But then he realized how important stability was for his country, and declared himself emperor. In other words, he restored the monarchy, overthrown by the revolution.

Other leaders did likewise. Vladimir Putin acted in the same way during his presidency, from 1999 to 2008.

But with 2008, he began to pursue a completely different program. He began to try to concentrate power as an individual. Since 2008, Putin has ruled the country just like Putin, and not as president or prime minister.

This is well illustrated by the example of the position of the Prime Minister in the party "United Russia". On the one hand, Putin is the chairman of the ruling party with enormous powers. On the other hand, he is not a member of Edra. Thus, he is not obliged to follow party discipline or a party program, while United Russia members must comply with his decisions.

A similar system operates on a nationwide scale. It turns out that Putin is trying to take as much power as possible, but to minimize responsibility. For what responsibility (and to whom?) Should be borne by the chairman of United Russia, who is not a member of the party? Before the party congress? So this is a congress under Putin, and not Putin at the congress. He clicks his fingers - and there will be no congress.

In other words, Putin is trying to rule Russia as his estate. He is trying to become a kind of private owner of the country, to rule everything and not to answer for anything. After all, the answer to the people should be held by people occupying top positions. President, deputies of the State Duma. According to our Constitution, the chairman of the government is not at all an influential person. The main burden of responsibility lies, it turns out, on Medvedev. And the base decisions are made by Putin anyway.

The only thing he needs is popular support. But there is a specificity. Any charismatic leader demands national trust for some great project. Be it industrialization or war with neighbors. Therefore, all the great dictators and strong democratic presidents of the 20 century had clear programs. The voter understood very well for whom he voted, choosing Roosevelt or de Gaulle. And the party bosses knew what the position of Stalin was, supporting him at their party congresses.

Putin, on the other hand, demands support, but does not present any clear program. He asks the people to support himself personally, but does not say what he will do if he retains power. It turns out that even if he again receives a vote of confidence, the current prime minister will be able to implement any policy that he likes. Incredible freedom of the hands.

However, the transformation of Russia into Vladimir Putin’s personal estate makes Russian statehood incredibly vulnerable. If all Russian power rests on Putin’s personal popularity, on his agreements with Caucasian leaders like Ramzan Kadyrov, on his ability to settle elite conflicts, what will happen if Putin leaves (at least on vacation)? Is it possible that without him the whole system, built personally for him, will fall to dust? The unauthorized State Duma, together with the unreliable president and the unpopular government, cannot rule the country.

Even if Putin returns to the presidency, the problem will remain. After all, he will rule like Putin, and not as the head of state. Here I recall the modern Libya. If another person comes to Gaddafi’s place, say, his son, the whole system will collapse, since everything rests on the personal authority of the “leader of the revolution”, because formally he does not occupy any posts.

Russia is following the Libyan path, when all official institutions become fiction, and only the informal rulers behind the scenes are important. This greatly undermines the state, makes it poorly capable, because the fictitious rulers constantly lose to the real, the imaginary owners - the true owners. Therefore, the Popular Front is another step along the slippery slope of weakening state institutions. In this sense, it is not at all ridiculous and represents a threat to the format of the Russian statehood that existed in the last centuries. Still, the Russians are used to living in the state (albeit often very unkind to them). And today, the state is melting away like smoke, and on the surface a hierarchy of new nobility, similar to the medieval “feudal ladder,” appears, which is above the law and can do what it pleases. This means that the cover with the boiler of national anger may, sooner or later, disrupt.

Ctrl Enter
Noticed oshЫbku Highlight text and press. Ctrl + Enter
We are
About Stalin and KhrushchevWhat you didn't want to know about England
16 comments
Information
Dear reader, to leave comments on the publication, you must to register.