On the anti-Hitler coalition: why it did not become a new “Entente” 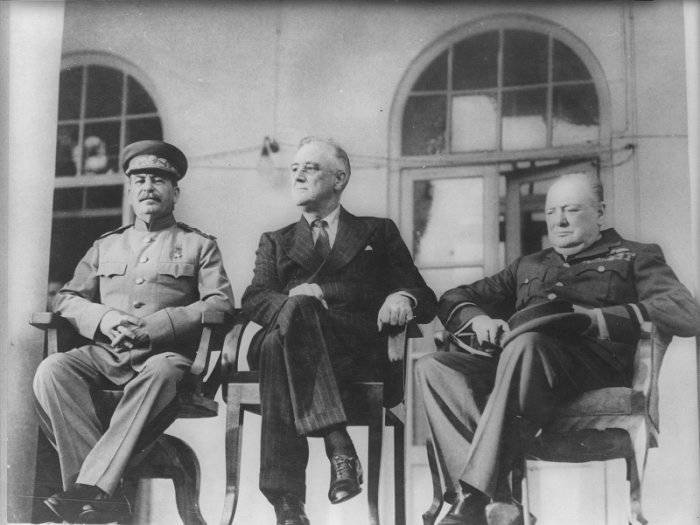 After the attack led by Hitler Europe on the USSR, the international situation changed. Hating USSR, Churchill, June 22, he stated that everyone who fights against the Third Reich is a friend of Great Britain. June 24 on the support of the USSR said Roosevelt. Representatives of the British prime minister and the American president arrived in Moscow, although their main goal was to “feel for the situation” - will the Russians last for a long time?

There was no real help at first, the requests of I. Stalin to open a second front in Europe, or the parcels of the English expeditionary force to Murmansk and Arkhangelsk were ignored. The only thing that was possible was to conduct a joint operation to seize Persia, which was in the interests of London and sobered by Turkey.

Only from August 1941 began to conclude agreements on deliveries to the USSR weapons, food, strategic raw materials. But at first they were not free, the amounts of loans, annual interest were negotiated, the payment went by mutual cashless payment for "counter" goods. From the USSR demanded gold and jewelry.

In London and Washington they did not believe that the USSR would stand, but before its fall they wanted to pump out its gold reserves, and that the war would go on longer. Therefore, already in September, London 1941 changed the conditions of supply, introduced its analogue of Lend-Lease. The United States agreed to a land-lease only in November 1941 of the year - weapons and equipment were leased, leased and returned, after the war. And until the end of 1941, Lend-Lease deliveries accounted for only 0,1% of all American supplies, the rest of the USSR was paid in gold.

In December, the Japanese Empire attacked the United States, 1942, it played a positive role for the USSR - part of the personnel divisions from the east of the country could be replaced by new ones only with formed units with new recruits. In the field of diplomacy, the United States and England became more compliant - they promised to open a second front in 1942, they increased lend-lease supplies.

True, Washington and London simultaneously developed a strategy for establishing their own “world order” after the Second World War. In August 1941, they adopted the Atlantic Charter, it did not recognize the territorial changes that occurred during the war, including the Soviet acquisitions of 1939-1940. Roosevelt announced the creation of a new system - the UN, the second stub of the "world government", which was to replace the League of Nations. The USSR in 1942 to enter it, so Russia was being pulled into the orbit of the “new world order” in an American way.

Lend-lease deliveries themselves, of course, brought certain benefits to the USSR, in such an intense battle everything could be useful - stew, trucks, Tanks, aircraft, etc. But you should not overestimate these deliveries - 4% of the armaments and equipment produced by the USSR itself. Moreover, if we arrange the deliveries on time, it turns out that the main flow of Lend-Lease cargo started in 1943, when it became completely clear that the USSR would not collapse and a protracted war would continue. But it was precisely in 1941-1942 that every plane, tank, and supplies were insignificant. USSR applications for the first protocol - October 1941 - June 1942, were reduced by half, actually sent even less, so the United States fulfilled its obligations on tanks and planes by 30%, cars by 19%.

In June, 1942 was cut off under the pretext of preparing the opening of the second front, although in the 1942, the second front was not going to be opened. So, in the winter 1941-1942. Churchill drafted a memorandum for the chiefs of staff, it was clearly stated there: “The main factor during the war is currently the defeat and loss of Hitler in Russia ... Neither Great Britain nor the United States should take any part in these events ...”. For them, the ideal situation was when two main geopolitical opponents, for Anglo-Saxon rule on the planet, beat each other, burying their best sons in the graves.

In fact, a new “Entente” was created, where Russia again fought against Germany, and the Anglo-Saxons received all the benefits. The only difference was that in Russia the “fifth column” was significantly drained of blood and could not deliver a powerful blow from the inside that would have led to the death of the Red Empire. And after that, Washington and London would have crushed bloodless Germany. Or would have eliminated Hitler with the help of the conspirators, another more compliant "leader" signed a separate peace

The United States and Britain were implementing their plans: in November 1942, they landed troops in North Africa, which is interesting the French met them with fire, in some places even beat off. But Hitler used this excuse for the complete occupation of France - and the occupation was carried out by very small forces, in the East at that time there were fierce battles in Stalingrad. They did not oppose them, the French soldiers and sailors, without resistance, went to prisoner of war camps.

The second front was not opened even in 1943, explaining this by the unreadiness of the allies for such a large-scale operation, with the most powerful German defense on the Atlantic coast of France. Although at present we know that this is a lie: the Anglo-Saxons had at their disposal an Enigma decryption system and read all German secret messages freely. And they knew very well that the defense of the Germans was very weak, all the best units on the Eastern Front. The main reason was the same as in 1942, the desire that Berlin and Moscow weaken each other as much as possible. 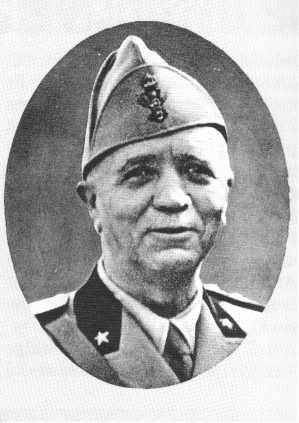 Pietro Badoglio, Marshal of Italy (25 Jun 1926), Duke of Addis Ababa, Marquis Sabotino, Prime Minister, who took power over the country after the overthrow of Mussolini in 1943, declared neutrality and brought Italy out of World War II.

True, the Anglo-Saxons organized the capture of Sicily, with the help of mafia structures, the "fifth column" of Mussolini. A coup was organized in Italy itself, Mussolini was arrested, the government was headed by Marshal Badoglio. At this time, there are several very interesting phenomena: Hitler is pissed off and wants to strike in Italy, but the head of intelligence, Canaris, and other associates persuade him not to do so. They say there is nothing to strike, Canaris conceals information about Badoglio’s negotiations with the Westerners, asserting that Rome is still an ally of Berlin, if quarreling with the Italians, then replacing Italian troops in Russia, in the Balkans. September 3 Rome signed a secret armistice agreement with the Anglo-Saxons, September 8 announced a break with Berlin. British and American troops landed on the peninsula. There is also an interesting point here - it was more profitable to land the troops in the north of Italy, thus the German divisions of Kesselring would be blocked; besides the powerful industry of the north of Italy would be captured, the Anglo-American troops would unite with the Italian units.

Therefore, Berlin ordered Kesselring to disarm the Italian troops. The German group, most of which was engaged in deterring the Anglo-American forces, were able to disarm the Italian troops. Although they were in their homeland and were superior to the Germans in number, they allowed themselves to be blocked, disarmed and taken to prison camps. Disarming and capturing the Italians in Russia and the Balkans also passed without incident. Berlin was able to create the Italian Front. Or was he allowed to do this? After this, the actions on this front went without serious consequences for the Reich - the allies moved through small Italy for more than a year and a half. 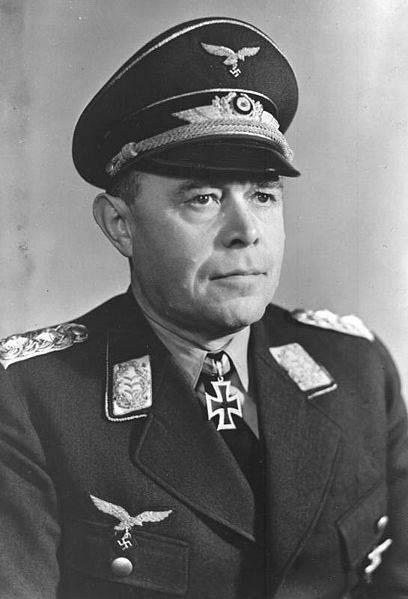 Albert Kesselring, Field Marshal Luftwaffe. As commander in the south, he led German forces in the Mediterranean theater, including the North African campaign. Kesselring restrained the Allies on the Italian front until October 1944, when he got into a car accident. At the final stage of the war, he commanded the German troops on the Western Front.

Stalin in relation to the old "allies" on the Entente acted quite differently from the tsarist government. If Nicholas II went to meet the demands of Paris and London, considering the common interests above Russian, in the case of need was a polite and modest petitioner. That Stalin clearly defended the interests of the USSR-was a pragmatist, a rationalist. He held firmly, independently, considered the "allies" debtors of the Union, demanded from them, but did not ask. And his policy was much more effective, London and Washington had a hard time. The authority of the USSR was much higher in the world.

Stalin really determined the global policy: he did not allow the Control Council to establish power in France, since France was actually an ally of Berlin. He recognized the de Gaulle government in exile, insisted that France become a member of the anti-Hitler coalition, and then a separate French zone of occupation of Germany was allocated. So France was not defeated in the German camp, but the winner in the camp of the anti-Hitler coalition. And what is important - de Gaulle remembered this, becoming the leader of an independent France, retaining respect for Stalin even after Khrushchev's “revelations”.

In addition, Roosevelt led his game against London, Washington more and more intercepted the threads of control from the decrepit British Empire. So, in 1943, through J. Davis, and then himself, Roosevelt proposed to Stalin to divide the colonies of England into "spheres of influence." Stalin refused to discuss this issue, realizing that there was some kind of American game of his own.

Ctrl Enter
Noticed oshЫbku Highlight text and press. Ctrl + Enter
We are
Diplomats of the People's Commissariat of Defense: on the eve and during the warSecret Voyage
9 comments
Information
Dear reader, to leave comments on the publication, you must to register.