25 2011 June
6
Exactly 70 years ago at dawn of 22 on June 1941, troops of Nazi Germany crossed the Soviet border, the Great Patriotic War began. The Germans carefully worked on the offensive and paid attention to detail. They assigned a special place in the initial offensive plans to a separate special-purpose regiment, Brandenburg 800. This unit was the main reconnaissance and sabotage force of the Wehrmacht, which contributed much more to the development of military science than the activities of the skydivers of the legendary Otto Skorzeny. The initial phase of Operation Barbarossa was his finest hour for this German unit.

The founding father of the sabotage division is von Hippel, who during the First World War, fought as part of the African contingent of the Reichswehr. A few German forces in a debilitating tropical climate and rampant malaria successfully opposed a larger grouping of the British Empire. Largely due to the use of innovative and nowhere undescribed methods of warfare by the German General Staff. Leaving useless attempts to keep the positional front with obviously weaker forces, the Germans actually switched to guerrilla warfare tactics. They delivered devastating and unpredictable blows to the groupings of the British troops and took refuge in the jungle. Throughout the First World Britain did not manage to deal with the German troops in the African theater of operations.

At the beginning of the 30-ies, Theodore von Hippel transferred the experience of military operations in Tanganyika to paper in the form of a special report. This material caught the eye of the head of the Abwehr (military intelligence and counterintelligence) Admiral Wilhelm Canaris, and already in 1935, von Hippel was again drafted into the army with the task of forming a special forces "professional partisan." 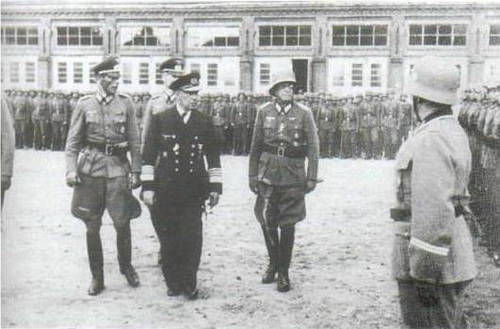 Admiral Canaris inspects the Brandenburg 800 regiment
27 September 1939, Theodore Hippel submits to Canaris a report on the creation of a special forces unit. The already well-established commandos should have become the backbone of it. October 25 Canaris signed an order to create a "training construction company for special applications - 800" with a location in Brandenburg. The words about construction and training were only a cover, part of which was directly subordinate to the Abwehr 2 department responsible for sabotage work.

When recruiting recruits in the Abwehr did not rely on the requirements of any documents or statutes governing the process of recruiting army units. First of all, candidates were required for resourcefulness, ingenuity, ability to adapt to all sorts of conditions, excellent knowledge of a foreign language and familiarity with the realities and customs of life in other countries. During the personal acquaintance, the management of the company determined the degree to which the candidate was prone to adventurism and how conspicuous his appearance was. Those who passed this first most formal selection were in for serious tests: a test of psychological stability, intelligence, ability to navigate the situation and improvise on the go, self-control and self-discipline. Of course, special attention was paid to physical training, which should have been at least above average.

In mid-December 1939, the company was deployed to a battalion that retained the same number and name. The battalion consisted of the 7 company, including the headquarters. All companies were divided according to geographical and professional characteristics. For example, in the 1 of the Baltic company were immigrants from the Baltic States, Russia, Finland, during the 2, English, African, Portuguese and French platoons were assembled, the 3 company was staffed by Sudeten Germans, 4 from Poland, separate companies were parachute and southwestern. In addition, the battalion in its composition had a separate motorcycle platoon, as well as the northern and western platoons. Relationships within this part were rather friendly. Military greetings, which are traditional, were replaced by the usual handshake; they did not train in special forces. This is a very reasonable explanation: army teams driven into the subconscious and the answers “so sure”, “is”, “I am listening” could give a saboteur to the enemy’s territory. A military bearing would only hinder the merging of a crowd of civilians if necessary. 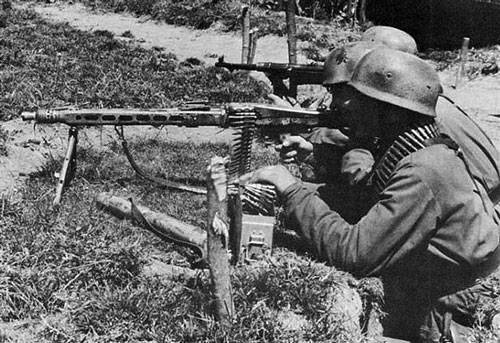 1 June 1940 of the battalion was deployed 800 training regiment special purpose "Brandenburg", the name of which is still for the conspiracy remained the word training.

The main camp of the Brandenburg 800 regiment was the training ground in the town of Quentztug. Here was located a special engineering field, on which sections of the railroad tracks, highway intersections, trusses of bridges, power poles were mounted, all that was necessary for the training of saboteurs. It also housed a specialized shooting range. Much attention in the preparation of saboteurs was paid to the issues of imperceptible penetration of the object, removal of sentries, mining. The main subjects of training were disruptive business and individual work. The preparation process was very intensive, despite the fact that each of the cadets had already mastered an army specialty. The duration of the training course was 9 months.

The cadets studied the following list of disciplines: types weapons and their use, enemy shooting, parachute training, martial arts (jiu-jitsu), driving all types of vehicles and military equipment, including teaching the basics of locomotive control and piloting. In addition, the cadets studied radio equipment, camouflage, photo work, terrain orientation and topography, a foreign language, customs and legislation of the country of “application”. Passed a separate course of engineering training - mining and demining, handling of various explosives and their production in the living conditions, the basis of fortification.

It was difficult for one specialist to master the entire range of these disciplines, so the cadets were differentiated according to their inclinations, abilities, origins and other factors. Depending on the geopolitical interests of Germany, rather exotic units were formed as part of the regiment. So, before the operation “Barbarossa”, together with groups of mountain Bavarians and Tyroleans with excellent mountain-alpine training, groups of fighters were created who were able to handle dog sleds and mastered skis. 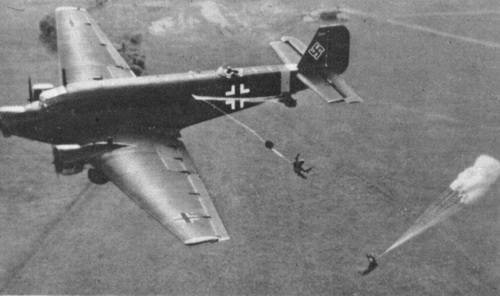 One of the innovations in the work of "Brandenburg" was the complete rejection of any humanitarian restrictions and the old laws of warfare. Everything was permitted, if it could lead to a result, the contradictions of universal morality faded into the background. Brandenburg fighters were allowed to use any weapon, hostage taking, torture during interrogation, the killing of children and women, and much more, which took the saboteurs not only from the protection of the Geneva Convention, but also for the simple customs of warfare. From a certain point on, saboteurs began to issue special capsules with poison in order to get rid of possible captivity.

Unit actions at the initial stage of Barbarossa’s operation

22 June fascist Germany attacked the USSR, the first detachments of Brandenburg, disguised as Red Army men, crossed the border at the end of June 21. Special forces soldiers were busy strategically important bridge across the Beaver River - a tributary of the Berezina. They also succeeded in destroying the border posts at the site of the Wehrmacht infantry division 123, which allowed it to immediately reach the operating room. With the rising of the sun, special forces soldiers capture dozens of bridges, causing death and panic around themselves.

25 June a platoon of Lieutenant Lex from the Brandenburg 800 regiment as part of 34 man parachuted near the Bogdanovo station, having the task of seizing the railway bridges across the Berezina River. Soviet-disguised Brandenburgers engage in battle with guarding the bridge and at the cost of losing 5 people killed, including the platoon commander, and 16 taking over wounded bridges. Repulsing the attacks of the Soviet troops, the remains of the platoon hold the bridges until the evening of June 26 until the advanced units of the Wehrmacht approach.

26 June in order to prevent the possible retreat of Soviet troops and their occupation of defense along the Western Dvina River, the 8 Company of the Brandenburg 800 Regiment assigned to the Manstein Corps is conducting an operation to seize bridges near the city of Daugavpils (Dvinsk). At 7 in the morning, Brandenburg fighters, disguised as Red Army men, arrived at the ZNX 4 and approached the road bridge across Zapadnaya Dvina. Border guards were in charge of guarding the bridge, they missed the first car, but the second caused suspicions and the border guards tried to stop it. An exchange of fire ensued, during which 6 brndenburgers were killed, including the commander of the group, Lieutenant Knaak, 20 was injured, but the border guards, who did not have an order in case of a similar situation, did not have time to blow up the bridge. 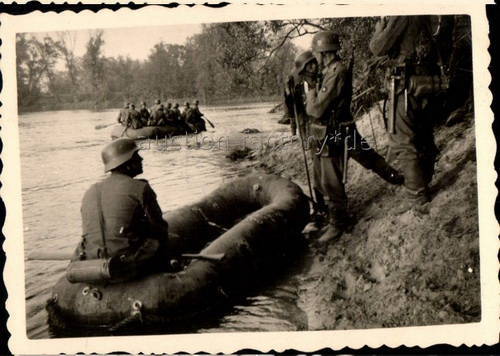 The Brandenburgers held the bridge for an hour until Major Wolf's advance team arrived tank, an infantry and sapper company that crossed to the other side and from the rear attacked the railway bridge over the river. The border guards tried to blow it up, but part of the charges did not work, and the bridge was only partially damaged. By 12:50, the Germans controlled both bridges and completely occupied Dvinsk.

Another major success of the unit was the capture of Lviv 29 June 1941. When attacking the city, the role of the forward detachment was assigned to the special Nachtigall (Nightingale) battalion formed from among Ukrainian nationalists, mainly residing in occupied Poland. As a result of well-planned actions, the battalion entered the city with little or no resistance and seized key facilities at 10 hours of the morning — the station, the power station, and radio centers.

In the summer of 1941, the fighters of the Brandenburg 800 regiment carried out a number of successful operations to capture and destroy strategic facilities in the USSR, and also carried out a host of local sabotage and reconnaissance operations in the near Soviet rear. Groups of coastal saboteurs carried out a number of very tangible attacks on communications in the Baltic, Black Sea and Azov coasts. The nightly raids by the Special Forces fighters sowed panic in the rear of the Soviet troops and undermined the morale of the Red Army men. 1941 year was one of the most successful for all the years of the special forces.

We are in Yandex Zen
Myths of the Great Patriotic. Papier mache helmet
Trophy armored vehicles Wehrmacht. France
6 comments
Information
Dear reader, to leave comments on the publication, you must to register.