25 2014 June
11
Last week, in the late evening of June 19, the Russian-Ukrainian launch vehicle Dnepr launched 33 small satellites from the 17 countries of the world right into orbit. This launch means that the United States and the new authorities in Kiev did not succeed in blocking the cooperation of the Russian Federation with foreign states in the field of space. The launch of a rocket with a record number of satellites on board was carried out from the territory of the Yasnensky unit of the Russian strategic missile forces located in the Orenburg region. All 33 satellites were successfully launched into Earth orbit, a joint Russian-Ukrainian venture Kosmotras, which is the operator of the Dnepr program, reported on this.


The launch campaign was carried out in full and without incident. The 17 satellites of the world, including Argentina, Spain, Italy, Kazakhstan, Canada, the Netherlands, Russia, Saudi Arabia, the USA, Ukraine and Japan, could be put into orbit. Among others, the rocket put into orbit Russia's first private satellite. We are talking about the TabletSat-Aurora satellite weighing 25 kg. This microsatellite is designed for remote sensing of the earth's surface using an optical camera, the resolution of which is 15 meters. The information received from the satellite is planned to be received on a wide ground network of receiving stations of the engineering and technological center “Scanex”. After that, the data can be used in scientific, environmental, educational and commercial projects.

The launch, which was held on 19 June, was already the twentieth in the framework of the Dnipro program. Its uniqueness lies not only in the unprecedented number of spacecraft launched at one time into orbit for the national space program. And it’s not even the fact that the rocket launched the first private Russian satellite into near-earth orbit. The main significance of the launch lies in the fact that it actually broke through the emerging blockade, in which the US for the past few months, with the hands of politicians from Ukraine and Western countries, tried to draw our rocket and space industry. According to the Federal Space Agency, a total of 2014 is planned to be launched under this program during 3 year. 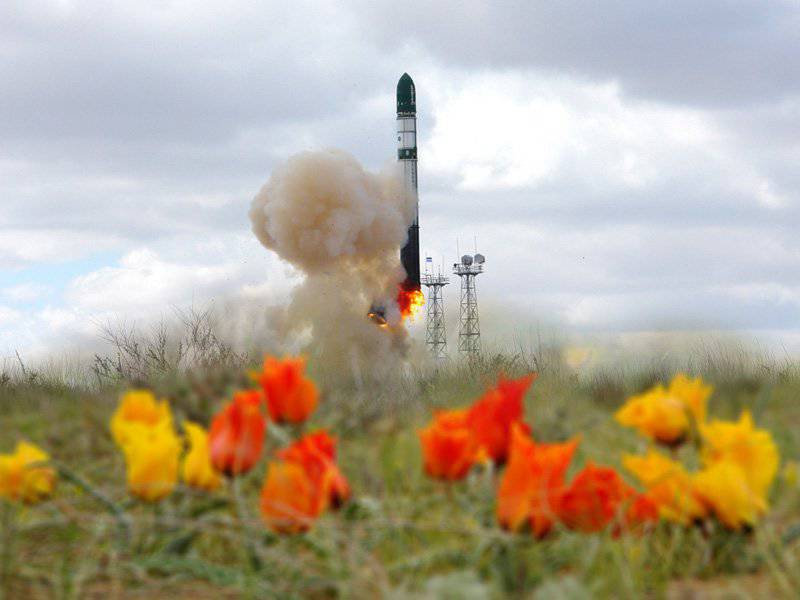 Dnipro is a Russian-Ukrainian launch vehicle developed on the basis of the famous RS-20 intercontinental ballistic missile (according to the NATO codification, Satan). The rocket, created on the basis of the ICBM, fulfills purely peaceful goals today. "Dnepr" is a liquid rocket, made on a three-stage scheme with a sequential arrangement of the steps and the head part of the rocket. At the same time, both the first and second stages of the launch vehicle are the standard stages of the “Satan” and are used without any modifications.

The third stage is also standard for the PC-20, but it was finalized in part of the modernization of the control system. The modernization allows the implementation of a given flight program of all rocket stages, the formation and sequential issuance of commands sent to the automation elements of spacecraft separation devices, as well as detachable nodes of the space warhead (KGT), KGT and third stage rocket withdrawal from the working orbit after all spacecraft.

The launch mass of the rocket is 210 tons, the length is 34 meters, the diameter of the rocket is 3 meters. The rocket is able to put into a low near-earth orbit (300-900 km altitude) a group of satellites for various purposes or a spacecraft with a launch weight of up to 3,7 tons. Currently, the program for the development and operation of the Dnepr launch vehicle, which was created on the basis of one of the most powerful stories The MDB is considered one of the most serious programs in conversion history. The basis of this Russian-Ukrainian project consists of more than 150 intercontinental ballistic missiles, which are suitable for conversion into launch vehicles. 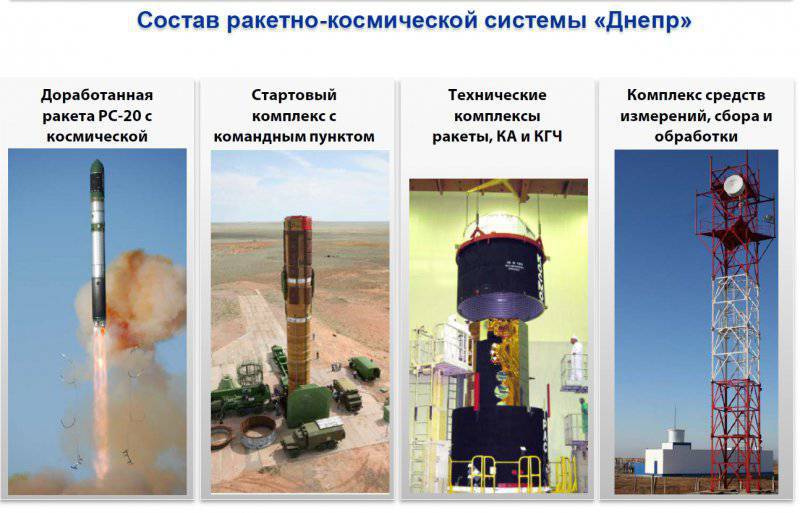 This conversion program came into being at the beginning of the 1990s against the backdrop of the signing of a strategic offensive arms reduction treaty (START-1) between the USA and the USSR. The contract came into force in 1994 year after the collapse of the USSR. According to the agreements reached between the countries, Russia has pledged to halve the arsenal of its most formidable strategic weapons - PC-20 missiles. The MBR data were designed in Yuzhnoye Design Bureau (Ukraine) and mass-produced at the Ukrainian enterprise Yuzhmash. This rocket to this day remains the most powerful means of offensive strategic weapons throughout the world. Currently, the Russian armed forces are still armed with the 52 missiles of this type.

According to the START-1 agreement, a large part of the Soviet arsenal of Satan missiles was to be disposed of. But in Russia they found the best use of the unique MBR. In 1997, a Russian-Ukrainian joint venture (50 / 50) was founded in Moscow under the name Kosmotras. On the part of our country, Roskosmos, the Ministry of Defense of the Russian Federation and a number of companies in the rocket and space sphere entered it, from the Ukrainian side - the space agency of this country, Yuzhmash, Yuzhnoye Design Bureau and the manufacturer of the missile control system - Kharkiv enterprise Hartron ". The shareholders of Kosmotras are scientific enterprises and organizations from Russia and Ukraine, which have developed this launch system, today carry out author and warranty supervision in the course of its operation.

Launches at the Baikonur cosmodrome and launchers of the 13 Orenburg Red Banner Rocket Division in the city of Yasny Orenburg Region can be used to launch launches of the Dnepr carrier rocket. The first launch of the new conversion rocket was made in 1999 year precisely by the combat crew of the Strategic Missile Forces. 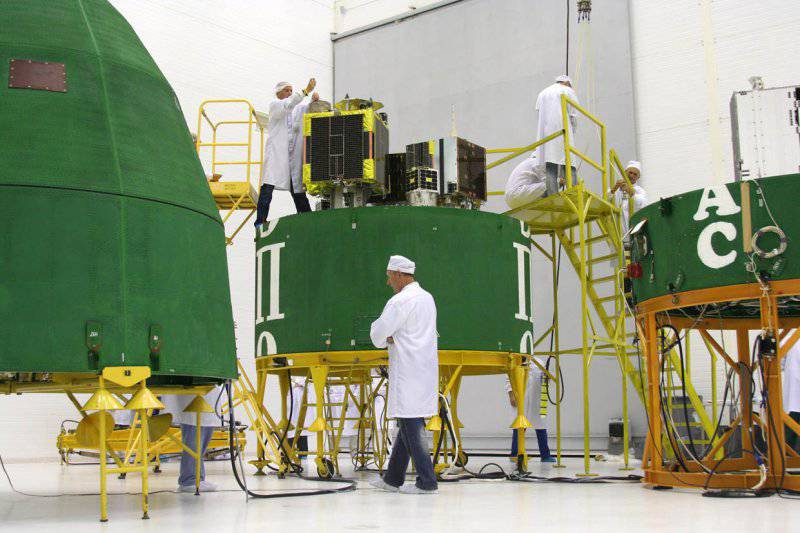 In total, since the first launch, which was carried out in 1999, Kosmotras carried out 20 launches of Dnepr launch vehicles, as a result of which 122 spacecraft of various purposes were successfully launched into near-earth orbit. The launch customers were companies and space agencies from Great Britain, Germany, Italy, Saudi Arabia, the USA, France, South Korea, Japan and many other countries of the world. The launch vehicle "Dnepr" has a very good reliability. During the 20 of the launches, a misfire happened only once - in the 2006 year, the US 11 microsatellites crashed. However, this incident did not have a special impact on the Russian-Ukrainian program.

Today, the launch technology of the Dnepr launch vehicle has been worked out to the smallest detail. The RF Ministry of Defense sends PC-20 missiles (they received such designation under the START-1 Treaty) to Dnepropetrovsk. Here, the rocket is “reloaded” and sent back to Russia or Kazakhstan. Here they are preparing for launching the spacecraft, integrating them with the launch vehicle and launching them. Small globally, but fairly stable business for delivering microsatellites, experimental spacecraft and university satellites to orbit. The cost of the program, given that the launch vehicle is almost ready, is minimal. At the same time, each launch of the Dnepr launch brings the parties (2010 / 11 information) approximately 31 million dollars.

In the spring of 2014, against the background of the aggravation of the situation around Ukraine, the US administration actually banned other countries from launching spacecraft containing American components using Russian launch vehicles. This decision jeopardized the entire Dnepr program, since the basis of the payload of the missile was always made by American and European satellites. Plus Ukraine and Saudi Arabia itself. Canada, as one of the most loyal American allies, announced that it would also refuse to launch spacecraft on Russian rockets. The new president of Ukraine, Petro Poroshenko, who, speaking at the National Security Council Council of Ukraine, banned any cooperation with the Russian Federation in the military-industrial sphere to Ukrainian enterprises, added fuel to the fire. In fact, this decision put an end to the Dnepr program in its current form. 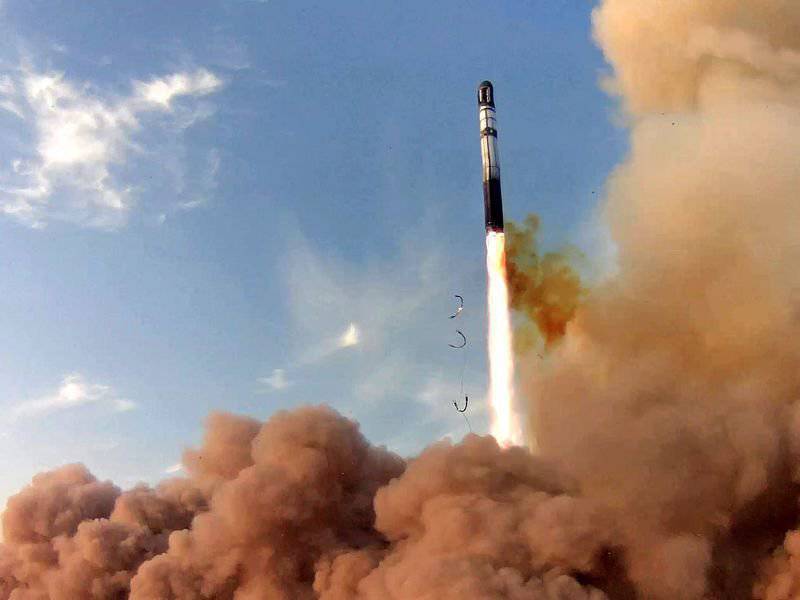 But only a week has passed since the loud statement, and the official decree that would announce the termination of the relationship between the “defenders” of the two countries has never been published anywhere. Therefore, Yuzhnoye Design Bureau, located in Dnepropetrovsk, continues to service the Russian Satan ICBMs, receiving good money for this. It is quite obvious that Dnepropetrovsk engineers took direct part in preparing the launch of the Dnipro 19 June.

Moreover, the Dnepr launch vehicle launched the 17 satellites of countries into orbit, showing the failure of the US threats against its allies. The funny thing is that the satellites of not only Canada, European countries belonging to NATO and Saudi Arabia, but also directly American satellites are launched into orbit. We are talking about communication satellites AprizeSat 9 and 10. The “international” composition of the satellite constellation launched into Earth’s orbit demonstrates better than any words that, despite pressure from the American administration, all Western sensible companies are not going to refuse to launch their spacecraft using Russian missiles. Business is above politics.

Russia will outlast Ukraine’s possible withdrawal from the project

Even if we assume that today's Kiev authorities tomorrow will give a direct ban on the participation in the conversion of the RS-20 ICBM by the Dnepropetrovsk Yuzhnoy and Yuzhmash design bureaus, then Russia will only benefit from such a decision. First, the Dnepr missiles fly infrequently - 1-2 times a year. Of the 36 launches to be held this year, only 2 remains on Dnipro. For this reason, Roskosmos will have enough free time to convert the ICBM into a light launch vehicle and on its own. According to the deputy head of Roscosmos, Sergey Ponomarev, it will take no more than 2-3 months to resolve the technological and organizational issues necessary for this. If necessary, Russia is ready to terminate the contract with Ukraine and transfer all work on the Dnepr carrier rocket to Russian cooperation, Ponamarev said in an interview with ITAR-TASS. The most likely successor to Yuzhnoye Design Bureau from the Russian side is the name of the Rocket State Rocket Center. Makeev. This Russian enterprise can become the leading company in extending the service life of these heavy ICBMs, the deputy head of Roscosmos said. A similar opinion is shared in the leadership of the Ministry of Defense of the Russian Federation. 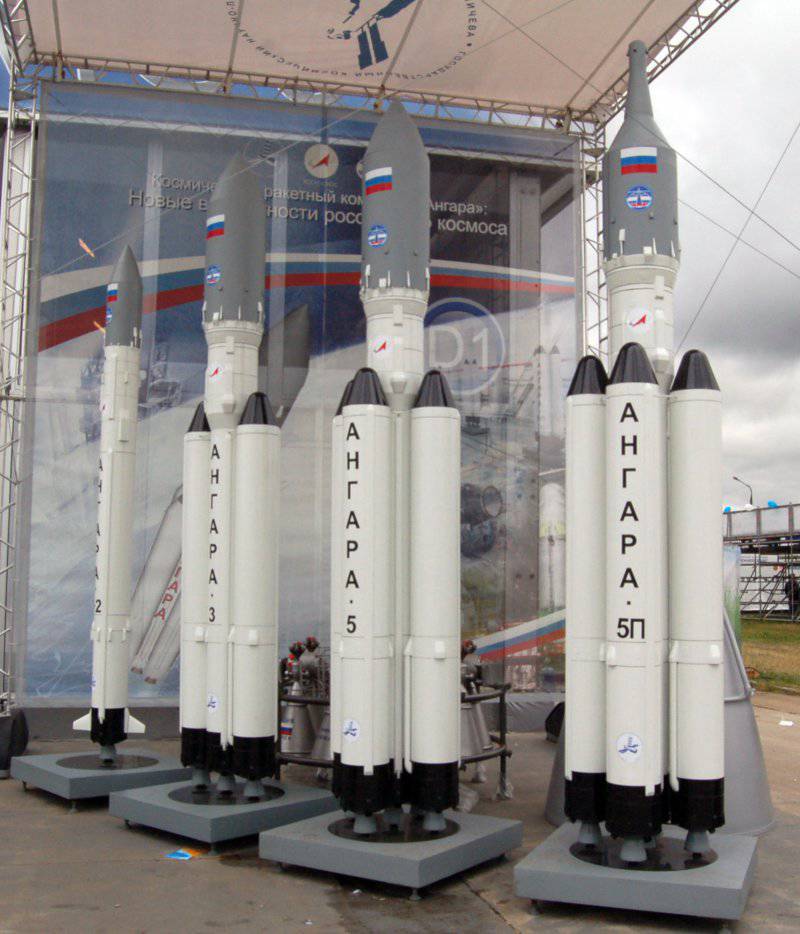 Secondly, the PC-20, created by the outstanding Soviet designer Vladimir Fedorovich Utkin, the rocket is excellent, but not eternal. Still, the period of its active operation already exceeds 40 years. Currently in Russia on the approach of 2 a new project of light launch vehicles. The first missile, Soyuz-2-1в, calculated for the payload in 3 tons and created in Samara-based TsSKB-Progress, made its first flight 28 on December 2013 of the year. This rocket has already liked both the operators of delivery to the orbit of commercial cargo, and the Russian military.

And at the end of June of this year, the first ever test launch of another Russian novelty, the light version of the Angara launch vehicle, which was created by the specialists of the GKNPTK to them, is to be held from the Plesetsk cosmodrome. Khrunichev. With a launch mass of 170 tons of rockets (40 tons less than the conversion Dnipro), the Angara 1.2 rocket is able to put payload tons into a low reference orbit 3,8 than the estimated payload put into orbit Dnipro. Of course, in GKNPTs them. Khrunichev, to put it mildly, was delayed with the creation of the "Angara", and it is increasingly difficult to call it a "new" project. But in Russia there still appears a whole class of light PH, which will allow us to select the most optimal options for delivering satellites into orbit for any customers without exception.

We are in Yandex Zen
Su-30M arrived in Kazakhstan!
Space Scouts. American spy satellites
11 comments
Information
Dear reader, to leave comments on the publication, you must to register.