24 2014 June
36
At the recently concluded exhibition of arms and military equipment Eurosatory 2014, the German company Krauss-Maffei Wegmann (KMW) for the first time showed a prototype of its new combat vehicle. KMW built and showed the general public a prototype of a self-propelled artillery mount based on the armored GTK Boxer chassis and the AGM combat module. Presented self-propelled gun is another combat vehicle based on a universal wheel chassis, suitable for the creation of various equipment. 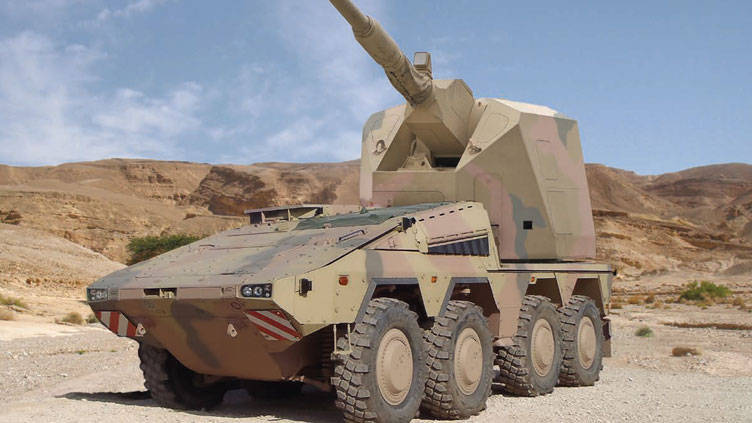 The aim of the new project was to create a promising self-propelled guns with high combat characteristics and high mobility. In addition, during the development of the project, great importance was attached to the modularity of the systems, which should ensure a great future for the new technology. Thus, fire performance requirements will be met using the new AGM combat module, and vehicle crew protection, mobility on the battlefield and the ability to transport self-propelled guns aviation or other vehicles are driven by the used base chassis. It should be noted that the development of self-propelled guns based on GTK Boxer was preceded by the creation of a similar combat vehicle on a caterpillar chassis, borrowed from BPM General Dynamics ASCOD. Like the new self-propelled guns, the previous KMW development used the AGM combat module.

The basis of the promising ACS, not yet named, is the armored GTK Boxer, developed by KMW and Rheinmetall Netherlands (Netherlands). This machine is a universal wheeled platform that allows you to build on its base equipment for various purposes. For example, the first serial modification of this vehicle was an armored personnel carrier capable of carrying up to eight paratroopers with weapons. At the beginning of the two thousandth, when the “premiere” of the vehicle took place, it was claimed that not only an armored personnel carrier or an infantry fighting vehicle could be created on its basis, but also other equipment, including self-propelled mortar or self-propelled guns.

Used in the new self-propelled chassis has a four-wheel drive eight-wheel chassis and is equipped with a diesel engine MTU V8 199 TE20 with power 710 hp Protection of the crew and machine units is provided by several types of AMAP modular composite armor. Depending on the tasks being performed, the corresponding supplementary booking modules can be installed on the chassis, increasing the overall level of protection. With all the available modules, AMAP armor can withstand a small-caliber cannon shell. In addition, the GTK Boxer is equipped with a bottom reservation that protects it from the detonation of mines. 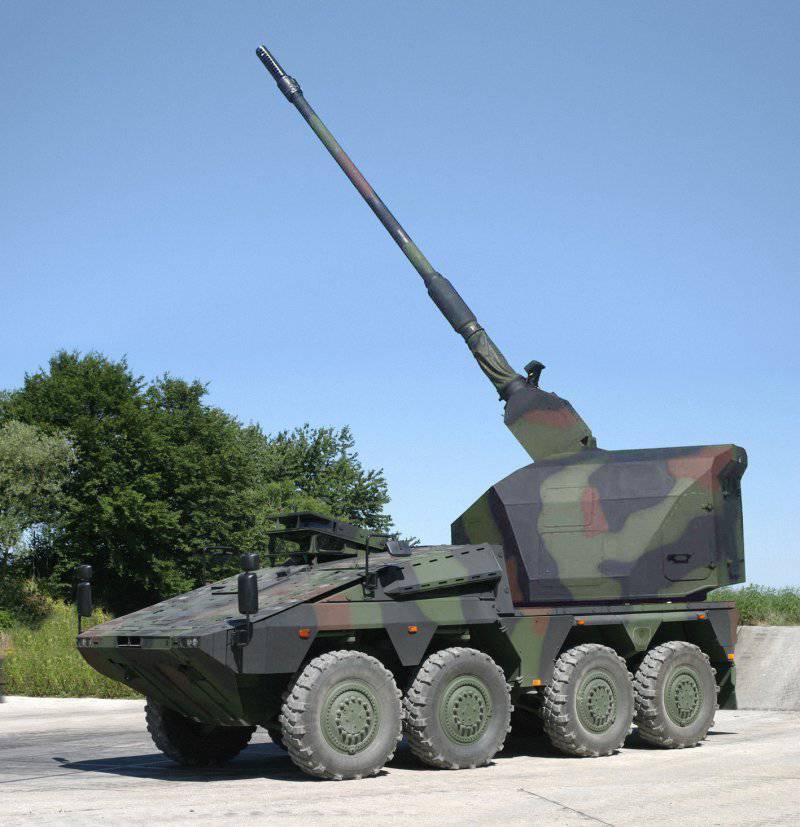 In the aft hull of the base machine GTK Boxer was originally provided for a place to install special equipment or weapons. In the case of the self-propelled self-propelled machine presented at the Eurosatory 2014 exhibition, the aft platform was used to install an AGM (Artillery Gun Module) combat module. This module is an armored housing of complex shape, in which the weapon and all the necessary equipment are installed. According to the company KMW, the AGM module can be installed on different base chassis. Is the demonstration of such a possibility a recent ACS based on a GTK Boxer machine? As well as the previously created machine based on the ASCOD chassis.

The AGM tower is equipped with a Rheinmetall 155 mm L52 gun. This gun is used on the German tracked self-propelled gun PzH 2000, operated from the late nineties. When using advanced active-missiles, this weapon can fire at a distance of more than 50 kilometers. For the convenience of the crew of the combat vehicle, the combat module AGM is uninhabited. All operations, including the guidance and loading of the gun, are performed by automatics. The turret is equipped with an 30 mm ammunition built into 155 ammunition.

According to reports, tower automatics can continue to work when the engine is off the base chassis. To this end, the AGM is equipped with an auxiliary power unit that provides all of its needs. The calculation of the self-propelled artillery installation of the new model is located inside the hull of the base chassis. All operations on aiming the gun and preparing for shooting are carried out using remote controls. The crew will have to leave the car only to replenish ammunition and some other operations.

An interesting feature of the new ACS based on the GTK Boxer platform is a powerful chassis suspension. It is argued that the wheeled chassis of the base machine allows firing from 155-mm guns without the use of outriggers. In addition, it provides the possibility of firing in almost any direction in azimuth. This design feature facilitates the operation of the machine, as well as reduces the time required to prepare for shooting and leaving the firing position. 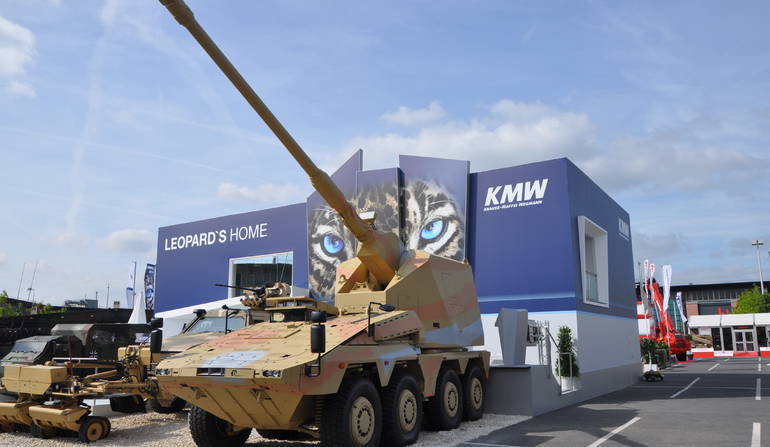 Shepard Media, a British news agency, cites the words of KMW artillery program manager Patrick Lenz. He believes that the characteristics of the chassis and the combat module allow the required stability of the machine without using any additional systems. However, the ACS will be able to use some stabilization systems, if during the first three shots in the series excessive deviations from the calculated parameters are noticed.

The combat mass of the promising SPG exceeds 30 tons. Speed, range and other similar characteristics are unknown. Probably, they roughly correspond to the characteristics of the basic GTK Boxer vehicle in the armored personnel carrier version.

It is reported that three prototypes of a promising self-propelled artillery installation based on the latest developments of KMW have been built so far. In addition, fire tests of the AGM combat module took place in spring Tests on the new ACS on the GTK Boxer wheeled chassis are scheduled for autumn. During these tests, the new artillery system must show whether the calculations of its designers were correct.

On the delivery of new self-propelled guns to customers is not yet. The car presented at the Eurosatory 2014 exhibition is one of the prototypes that will have to go to the training ground and show its capabilities. If the calculations of the designers and the proposed concepts prove viable, Krauss-Maffei Wegmann will offer its new development to potential buyers.