In Dagestan, six law enforcement officers were killed during the day and twelve more wounded 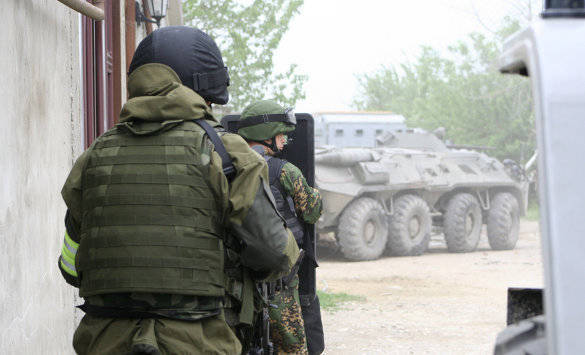 In the morning of June 22, a large-scale special operation to eliminate terrorists was resumed in Dagestan. Having stumbled upon a group of militants in the Kizlyarsky district, the security forces drove them deeper into the forest throughout the day, and with the onset of darkness they managed to surround the bandits. But the numerical superiority and environment did not give effect. The military suffered a defeat. The losses of the federal forces were five people killed and 12 wounded. And this despite the fact that by 14.00 on Wednesday not a single militant was destroyed.

As told to the correspondent of "MN" in the management of the TFR in Dagestan, a special operation to search for the so-called Kizlyar gang - one of the most active in the republic, began on June 21 on the morning of 7.30. The bandits managed to block near the village of Kuznetsovka. A counterterrorist operation regime was introduced in the area, and the security forces began a pursuit.

“The militant group numbered about 8-10 people,” an officer of the TFR said. “According to the available information, there are dozens of terrorist attacks and killings of law enforcement officers in the territory of Kizlyarsky District on their account.” It is difficult to say how many people the group has in total - there is a constant turnover there. Operations are carried out constantly when someone is being destroyed, the militants are recruiting new people. ”

On the part of the security forces, around 50 people participated in the operation - employees of the Ministry of Internal Affairs, the FSB and military personnel of the internal troops. For several hours they were pursuing bandits in the forest, driving them deeper into the thicket. In intermittent firefights, despite the superior forces, only law enforcement officers carried losses. Even on Tuesday afternoon, two employees of the Special Purpose Center of the Republican FSB were killed, and nine others were injured — three officers of the FSB, three police officers from the Department of Internal Affairs in the Babayurt district, and three soldiers.

By nightfall, the security forces managed to surround the separatists. However, around two in the morning, they attempted to break through the cordon. A battle ensued, during which three more soldiers died and as many were injured. No one was hurt by the militants - at least there is no official information about this either in the UK or in the Ministry of Internal Affairs. “Perhaps someone was injured, and someone killed. But no one saw the bodies, and therefore at the moment we say that none of the bandits have been destroyed, ”explained MN in the republican administration of the Ministry of Internal Affairs. At the same time, the interlocutor noted that, despite the impressive losses from the security forces, members of the gang did not manage to escape from the encirclement.

At dawn, their search continued. The Minister of Internal Affairs of Dagestan, Abdurashid Magomedov, who personally coordinates the actions of the siloviki, arrived in place on Wednesday.

In addition, on Wednesday night in the capital of the republic, a senior investigator for particularly important cases of the investigative department of the TFR in the Leninsky district of Makhachkala, Haji Alibegov, was killed. Two gangsters shot him around midnight on Khurshilov Street in front of his wife when he was getting out of his car near the house. The head of the TFR, Alexander Bastrykin, promised to make every effort to catch the criminals, but so far they have not been found.

We are in Yandex Zen
Results of anti-terrorist work on Dagestan in April 2014
32 comments
Information
Dear reader, to leave comments on the publication, you must to register.