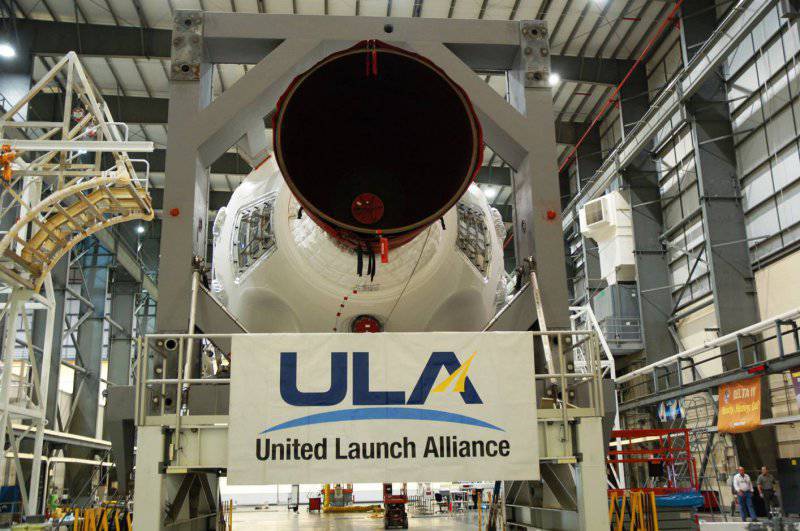 The situation with the supply of Russian rocket engines to US enterprises received further continuation. The United Launch Alliance (ULA), realizing the risks associated with the latest court decision on the supply of Russian products, initiates work on the creation of new rocket engines. A few days ago, the company ULA announced the conclusion of contracts for the preliminary work on the program to develop a new rocket engine. Several American companies and organizations are involved in the work.

So far we are talking only about the preliminary work in the framework of the creation of new engines. The companies involved in the program are required to submit a package of technical documentation in the near future, as well as to work out the economic aspects of the project, develop a schedule of work and identify possible risks. After analyzing the submitted documents, the ULA company will select the most successful offer and conclude a contract for the development and construction of new rocket engines. All work under the new program will take several years. It is argued that the first launches of launch vehicles equipped with promising engines will take place no earlier than 2019 of the year.

Over the next few months, participating companies will have to develop a preliminary draft and submit it to the ULA. According to current plans, the development and comparison of preliminary projects will be completed in the fourth quarter of this year. Further, ULA will select a contractor who will create the project, and in the future it will build new engines. Operation of the newest rocket engine will begin no earlier than the end of this decade.

ULA President Michael Gass recalled that his organization is the only company that has all the permissions and licenses for the most important missions, and also noted that the creation of a new rocket engine will allow the company to maintain its leading position in the American space industry. Moreover, the company must retain it and continue to carry out launches in the interests of the state. Vice President George Sowers, responsible for creating promising projects, said that the ULA has a number of alternatives to the technology used now. Many of the available advanced technologies can be used to increase the competitiveness of a company.

Despite the intention to get a new engine for its launch vehicles, the United Launch Alliance company does not intend to discontinue ties with the Russian-American joint venture RD AMROSS, which supplies it with RD-180 engines. At the same time, ULA experts will study the prospects of the existing partnership and assess the long-term feasibility of using Russian-made engines. In the future, they will compare the RD-180 engine and the new development of one of the American companies, created in the framework of the recently launched program.

M. Gass acknowledged the successful cooperation of ULA and RD AMROSS, but he noted that now is the right time to start new American projects. Thus, the United Launch Alliance company is trying to take a chance and start creating a new American rocket engine for modern and future launch vehicles.

Currently, ULA is installing Russian liquid-propellant engines RD-180 on Atlas V launch vehicles. The engines are manufactured by the Russian NPO Energomash named after V. Academician V.P. Glushko (Khimki). To meet the requirements of American legislation, the engines are supplied through RD AMROSS, a joint venture between the Russian NPO Energomash and the American Pratt & Whitney Rocketdyne (now Aerojet Rocketdyne). The existing contract between Russian and American aerospace enterprises implies the supply of RD-180 rocket engines until 2018.

In the spring of this year, against the background of deteriorating Russian-American relations, a number of events directly related to the supply of rocket engines took place. Thus, in late April, the US Federal Law Court banned ULA from entering into new contracts for the supply of RD-180 engines. The reason for the trial was the claim of the company SpaceX, according to which the deliveries of Russian engines are carried out in violation of the existing US law on procurement and tenders. A few days later, the ULA appealed this decision and also received the support of the leadership of the United States. Several government departments have submitted documents that indicate the absence of any irregularities in the procurement of RD-180 engines. In addition, the importance of such purchases for the US space industry was noted.

It should be noted, many experts believe that the cause of the lawsuit was banal competition. ULA has long and firmly taken the place of the main contractor for contracts between the US Air Force and other government agencies. The company SpaceX, in turn, also wants to get lucrative contracts and it is for this that she appealed to the court. At the same time, the whole situation with the trial was unfolding against the background of numerous discussions of sanctions against Russia.

As long as the existing contract, signed in the mid-nineties, is in effect, the American space program will be able to continue using Russian rocket engines. However, recent events have shown that in the future a number of leading enterprises in the industry may lose critical deliveries. In this connection, the flow of proposals to develop its own rocket engine suitable for the replacement of the Russian RD-180 has resumed with new force.

In mid-May, several US senators proposed funding for the development of a promising rocket engine next year. In accordance with this proposal, 2015 million dollars must be provided in the budget for the 100 fiscal year for the implementation of a new project. In the future, apparently, the state will allocate additional funding for the implementation of this project.

About a month after the appearance of the bill for the authorship of senators, ULA told about its plans for the development of the industry, announcing the start of a program to create a promising rocket engine. Most likely, the ULA program will be more successful, since work on it will start as soon as possible, and the proposal of the senators will have to go through several instances before it leads to the corresponding adjustments in the country's budget.

Before the bill on financing a new project in the United States, a proposal was made to begin licensed production of Russian engines in American enterprises. Apparently, this proposal remained at the level of conversations and discussions, since the production of RD-180 engines is carried out using Russian materials, technologies and standards. An attempt to expand the production of these engines in the United States would have led to the need to master a number of technologies, as well as to restructure many manufacturing processes to meet Russian standards.

The main topic of discussion now is the development of its own rocket engine with the necessary characteristics. It is already clear that such a project will lead to a great waste of money and time. For example, one of the authors of the bill to begin financing a promising project, Senator Bill Nelson, believes that it will take at least five years to develop a new engine. Other experts are less optimistic in their forecasts and talk about long periods: from seven to ten years. A few weeks ago, the Bloomberg news agency quoted analysts working with the Pentagon. According to these specialists, the program for developing a new engine to replace the Russian RD-180 will take at least five years and could cost the budget 1.5 billion dollars.

While senators, analysts and the public concerned are discussing the timing, cost, and even the very possibility of creating a new American engine, the United Launch Alliance is taking the first real steps in this direction. Recently, contracts have been signed with companies that should be engaged in determining the appearance of a promising engine. The first results of the new program will appear this fall.