The death of the sea legend of the 3 Reich 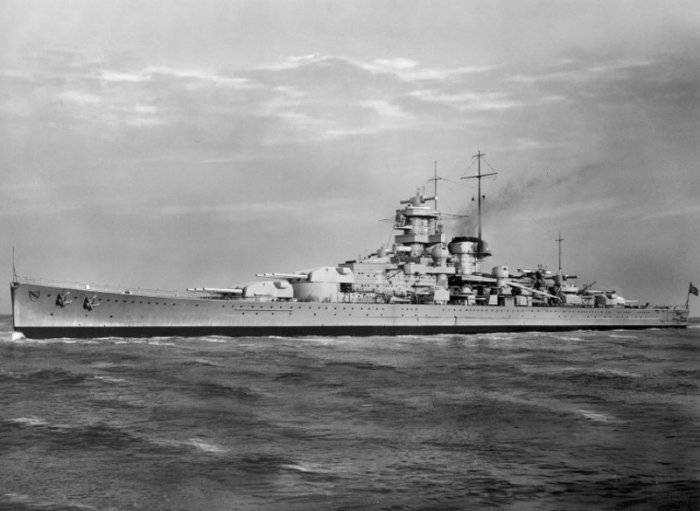 How long noticed, the one who does not know stories, always makes mistakes leading to the destruction of values ​​that are most dear to humanity. Even Aristotle believed that statesmen who set themselves the goal of enslaving many states and peoples, in a certain mystical way, turn into dust those objects of our material world that are most valued by humanity. And there are many examples of this. One of the indicative ones can be found in the very recent past, namely in the 20 century - this is the tragic fate of the Scharnhorst cruiser, engineering masterpiece, the pride of Adolf Hitler. The Fuhrer gave him the role of a trump card in his political battles. After all, it was the strongest floating fortress.

The most powerful fighting machine, causing surprise and fear in other states, "the curse imposed by the enemy". Dave Zwinger, an American historian, is one of the few who can uncover the truth about the events that took place at Scharnhorst, European journalists and journalists believe so. Where such confidence? The fact is that he is the great-grandson of Willy Zwinger, one of the anti-fascist officers who served on the ship. He accidentally survived after a terrible explosion, could not fall into the hands of the Gestapo, which with passion was investigating the death of the colossus. And the investigation was conducted very carefully. The investigators, having on their hands the denunciations that had previously come from the ship, came to the conclusion of a carefully planned action to destroy the ship.

Willy Zwinger himself, who became a US citizen in 1947, did not tell what happened then, fearing the revenge of fascist fanatics. But his grandson decided to tell the truth, because sooner or later the truth would have come out anyway.

Hitler, obsessed with the idea of ​​becoming the sole ruler of water and land, at the peak of his political career ordered shipbuilders to design and build such a cruiser, the combat characteristics of which would be many times greater than all the ships currently available. The most important task of the Fuhrer was the moral suppression of opponents. Triumph failed to produce. It was just terrible - in October 1936, when launched, under the jubilant shouts of the crowd, symbolic smashing of champagne bottles by the Fuhrer himself, the Scharnhorst cruiser collapsed on nearby double barges, just crushing them. The cruiser itself received very serious damage. All seven-inch ropes burst. “Cruel Krupp’s steel,” said Hitler, furiously, “repair the ship as soon as possible.” “This is a flaw in the gentlemen of engineers who should be punished,” the Führer decided when the cruiser overturned in the dry dock due to the wrong actions of the workers, ditching the 60 man. And although he reported on the possibility of sabotage, Hitler did not believe it. Engineers were strictly forbidden to leave the shipyard. Moreover, this ban acted right up to the completion of construction and testing of the ship on the water. Dave Zwinger explains that this is practically the imprisonment of engineers, technicians and workers until May 45. They lived in barracks. The personnel responsible for fulfilling military orders was detained for almost 10 years. 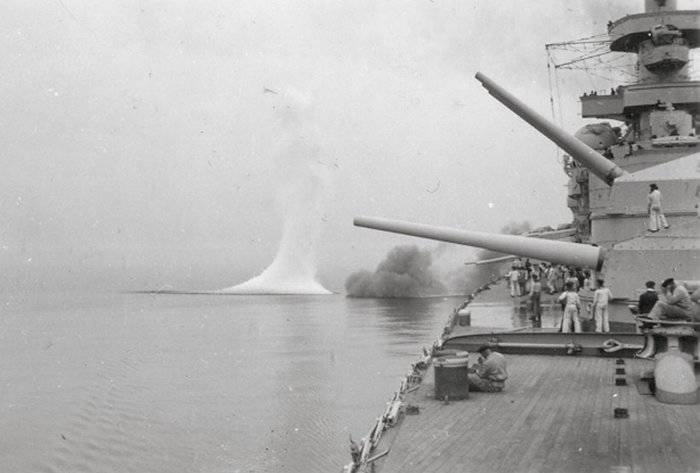 No matter how carefully they watched the staff, Dave Zwinger said that based on the memories of his great-grandfather, the shipyard, intended for the construction of the cruiser, had a great influence on the communists. They were about 6 people. Even the Gestapo informants, under their pressure, sent disinformation in denunciations. Willy Zwinger proudly told his great-grandson: “We decided to commit crimes in order to crush the Browns without causing damage to those who are fighting against Germany. We wanted to get another democratic country for the Germans, therefore, without hesitation, we sacrificed ourselves. ” And their determination was rewarded. Only through their efforts, the cruiser was simply a laughing stock of the Reich. How sadly they joked in the Reich Naval Ministry, winning one zero victory after another, guaranteeing an unnatural loss of personnel. Although the events that took place on it, to humor do not have at all. So, in 1939, the first nose cannon exploded, which is why the ship was towed to a repair plant. Before towing a single shot was made, a farewell. From the second nasal instrument. After this, the Scharnhorst guns fell silent.

The next tragedy occurred soon. 12 people died, poisoned by poisonous powder gases coming from the nose guns due to a malfunction of the latest and most reliable ventilation system. Although the Führer was not reported on this incident, so as not to "grieve." Ventilation installation replaced. But the sailors, recruited from among the technicians, slept and saw how to turn the Scharnhorst into a pile of metal.

The collusion of anti-fascists

Some historians reject the suggestion of Dave Zwinger about the collusion of the sailors - the Norwegians and the Germans. After all, the cruiser was assigned the main role in the shelling of Oslo. Their task was to ensure that after hitting the Norwegian torpedo the Scharnhorst went to the dock for repairs, independently, without the help of tugboats. Everything went smoothly, as the anti-fascists supposed. However, engine repairs would last the entire 2-3 of the month. This was categorically not enough for the conspirators. Therefore, for the complete defeat of the cruiser, it was decided to substitute it under the fire of the British bombers. And it was most logical to do this at the mouth of the Elbe River. Having made an "unsuccessful" maneuver to bypass the passenger liner "Bremen", the schedule of which was known by the minute, the conspirators forced the helmsman "Scharnhorst" to go to a collision.

After the bombing, no one had any desire to repair the cruiser. Too expensive to restore. But ... The Führer himself still believed in the restoration of the Scharnhorst, and ordered him to be taken to the shipyard for repairs. All historians know his phrase: “If it revives in the power of the Scharnhorst, Germany will be revived in its power. The Scharnhorst is not just a cruiser. This is a symbol of our revenge, our quick victory. "

In the remaining archival documents on the revival of the colossus are huge money. They would be more than enough for two new, similar ships. The head of the Reich knew this very well. And he considered that he should personally accompany his offspring after recovering in a military campaign. As it turned out later, they became the last and not at all heroic for the ship itself and practically the entire crew. And again, Dave Zwinger believes that here you should look for traces of the conspiracy of the German anti-fascists with the Norwegian sailors. And it was the Germans who indicated to them where the Scharnhorst headed. Whether this is so or not, historians are unlikely to be able to say for sure. Having reached the Northern Cape, off the coast of Norway, the cruiser, for some reason, refused to fight. And the battle with the squadron of ships escorting the North Atlantic leasing convoy became destructive for him. He was rammed through with torpedoes, sent to the bottom of the sea by an explosion. The shameful death of the pride of the Reich, the death of 1 467 crew members brought Hitler out of himself. With rabies, he blurted out: “No mourning events are needed! This is the lot of traitors who are not worthy of being Aryans! ” 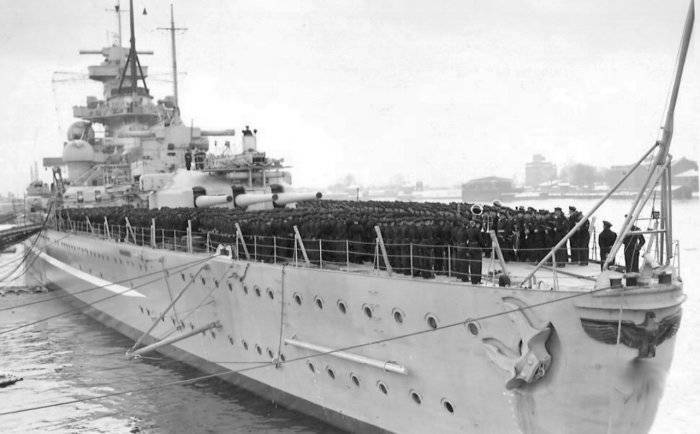 Yet the 36 team members survived. On the life raft they sailed to the shore. Another American historian Victor Mazar put forward a completely unconvincing version that their death was due to the explosion of a gasoline stove when cooking. Dave Zwinger, on the other hand, suggested that the sailors, because of "the fear of reprisal by the Norwegian fishermen," had themselves blown up on the trotyl sticks. But this idea does not hold water. For what, spending the last forces, to swim to another's shore and commit mass suicide, when you could stay with the whole team and heroically share their doom. And after examining the archives, it later became clear that the team that was not credible was replaced. But even among its composition, apparently, there were opponents of the fascist system. And among the leading officers, most likely, also found. Simply, this is the most logical explanation of why the most powerful cruiser with a huge arsenal weapons took off, and did not take the fight with a much weaker opponent. The death of this sea colossus brought the most important contribution to the death of the entire Nazi Reich.
Ctrl Enter
Noticed oshЫbku Highlight text and press. Ctrl + Enter
We are
22 June. Brest Fortress. Battle ReconstructionOur memory. Brest Fortress. Part of 1
8 comments
Information
Dear reader, to leave comments on the publication, you must to register.