22 2011 June
15
Soon the next naval salon will open in St. Petersburg, where the second corvette of the 20380 project will be demonstrated. In the summer of this year, he should enter service of the Russian Navy, making the company the leading ship, "Steregushchy." Undoubtedly, it is always nice to know that our fleet receives a new combat unit, but the joy is overshadowed by the extremely low rates of its replenishment.

The development of a new multipurpose warship for the Russian Navy began in the 90s, which could not but affect the course of this process. It is not only about underfunding and all sorts of delays characteristic of that time. The main thing - the design was carried out according to the previously unaccepted canons. In an effort to reduce costs by avoiding the traditional Soviet-era construction of several series of ships of various types, the developers made the 20380 project versatile, capable, unlike specialized predecessors, to fight submarine, surface, air, and ground targets.

The ship’s versatility defined its classification - a corvette, instead of the usual designation for third-rank Russian combat units, the MPK (small anti-submarine ship), MRK (small rocket ship), etc. This time they resorted to Western standards, according to which the corvette is defined as universal , multipurpose warship.

However, approximately corresponding to this classification in size (2000 tonnes of displacement), the promising Russian ship far exceeds its foreign counterparts in firepower. The presence of eight anti-ship missiles, a deck helicopter, a wide range of hydroacoustic weapons and anti-submarine weapons, 100-millimeter artillery systems and a rather impressive set of melee air defense systems led a number of specialists to classify this ship as a frigate.

No less important characteristic of the new corvettes is the presence on them of a modern combat information management system (CICS) "Sigma". It provides simultaneous tracking and hitting targets on land, water, under water and in the air like the American Aegis system, allowing you to organize collective defense, exchanging information, passing target designation and controlling weapons connections in real time. A detachment of ships equipped with such a system acquires previously unimaginable capabilities.

It should be noted that in the time since the collapse of the USSR, the Russian fleet has lagged significantly behind the Navy of other naval powers in replenishment with new generation combat units and is now catching up. Often this catch-up turns into a major breakthrough. So, today Russia has actually come to the creation of a unified family of warships of classes from corvette to destroyer, compatible for the most part of the main systems and differing in the number of installed weapons. Through unification of CIOS on all promising projects of 1-3 rank should provide the Russian the fleet in the future, the possibilities for coordinating actions and managing existing forces are more serious than many naval forces of the leading states of the world.

The capabilities of the corvettes are obvious, but they can be fully realized only as a part of warship detachments capable of solving serious tasks together, from the protection of navigation to the attack on an enemy aircraft carrier. At the same time, the current pace of military shipbuilding in the Russian Federation is so far making us doubt that such detachments will soon appear. 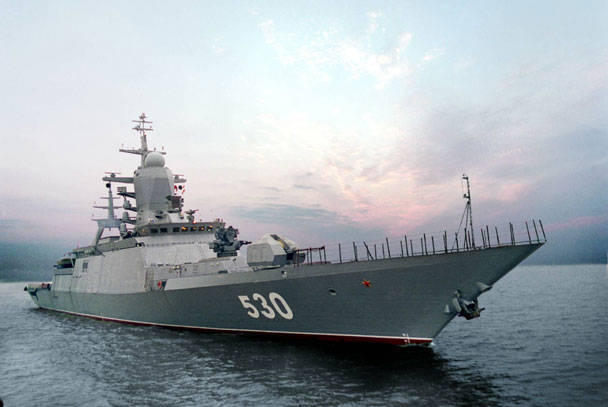 The corvette “Steregushchy” was laid at the end of 2001 of the year, launched in the spring of 2006, and put into operation in February of 2008, which in itself is long for a ship of this class, but explicable in Russia, whose industry was experiencing hard times. The second ship, as a rule, is already built faster, but the rule did not work here: the “Intelligent” bookmark in May 2003 and the launch of the corvette, scheduled for July 2011, is eight years and three months apart.

Such time lags, when repeated, threaten to disrupt the HPV-2020 in its naval section. In the next 10 years, Russia should receive at least 20 corvettes of the new project. There are tasks for them - from patrolling their waters to supporting large warships, the construction (and acquisition abroad!) Of which, in the absence of strong and numerous escort combat units, does not make sense.

For such a wide range of tasks, even 20 corvettes may not be elementary enough, and therefore voices occasionally sound insisting on increasing the costs of building new ships. They are really necessary for Russia: the long maritime borders, combined with the main theaters of military operations remote from each other, require a sufficiently strong fleet to defend them against any adversary in their theater. But no money that the state will be able to allocate for the construction of the fleet will not help if, as before, financing will be conducted with a six-month delay, and our industry will be unable to absorb the funds received in full.

Will the situation change, we will know pretty soon. The third corvette of the 20380 project - “Boky” has already been launched. Founded in the 2005 year, it has chances to enter service faster than both of its predecessors. It remains to wait for the result.

We are in Yandex Zen
Shipbuilding Program of the Russian Navy, or a Very Bad Premonition (part of 4)
"Svetlana". History of creation
15 comments
Information
Dear reader, to leave comments on the publication, you must to register.