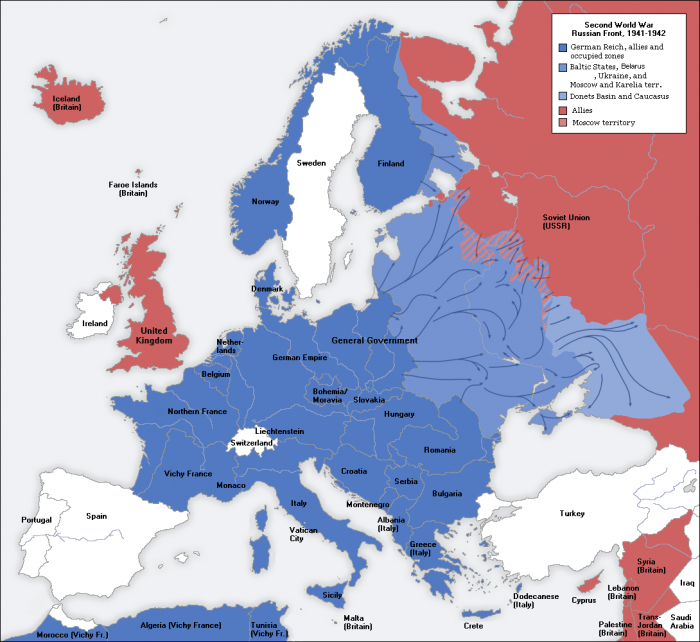 The majority of Russian citizens perceive the Great Patriotic War as a clash between the USSR and Germany, but this is not true. In fact, this was another act of war, which has been going on for more than one century: United Europe against the “Russian barbarism”, Western civilization against the Russian civilization, Russia. 22 June 1941 of the year on the USSR struck, almost all of Europe committed aggression.


“The European Union of that time, under the auspices of the possessed (in terms of“ connecting ”to the“ dark world ”) Hitler hit us. After all, only the "blind" will not see the fact that almost all European countries have "laid down" under Hitler without much resistance, perhaps, except for Greece and Yugoslavia, which can be attributed to their "Orthodox mentality."

By the time of the invasion of the USSR, the Third Reich had seized 11 states: Austria, Czechoslovakia, Poland, Norway, Denmark, Belgium, Holland, Luxembourg, France, Yugoslavia and Greece. All of these states were dismembered in the interests of the “new German order”, and their position was determined in accordance with the statuses introduced by the Hitlerites. Part of the territories and some states became part of “Greater Germany”: the Sudetenland of Czechoslovakia, Austria, Danzig-Gdansk, the territory of West Prussia, Poznan and Silesia, Luxembourg, the Belgian Eupen and Malmedy, Alsace and Moselle, Northern Slovenia were expanded at the expense of Poland. In other lands, direct control (military or civil) from the Reich was introduced: the Polish Governor-General, Norway, the Netherlands, Belgium and Northern France. In the third lands, “guardianship” over local authorities was established: the Protectorate of Bohemia-Moravia, Slovakia, Denmark, Vichy France, Serbia, Montenegro, Croatia, Greece.

Of the countries that have preserved independence, five were allies of Berlin: Finland, Hungary, Romania, Bulgaria, and Italy. All but Bulgaria fought with the Soviet Union. The rest of the countries that remained officially neutral — Sweden, Switzerland, Portugal, Spain — somehow or other supported the “crusade” to the East. Sweden supplied Germany with iron ore, zinc, bearings, tools, timber. For her, war has become a real “gold mine”. Non-ferrous metals also went to the Swedish ports in Germany; copper, lead, aluminum, molybdenum, tungsten and other non-ferrous metals during the war years, Sweden imported ten times more than its internal needs - and all of them, through dummy companies, sooner or later turned out to be in Germany. All the iron ore of Sweden went to the Reich, half of the metallurgical capacities of the German industry worked on it. In exchange, the Swedes received stolen valuables, including from the USSR, Swedish banks were full of money and valuables listed by the German side. Unhappiness and grief alone served as the basis for the “Swedish model of socialism”. In addition, the Swedish authorities strongly encouraged their homegrown Nazis to volunteer to participate in the war against the Soviet Union, both as part of the German Wehrmacht and as part of the Allied Army of the Third Reich of Finland. In the German armed forces and in the Finnish army near Leningrad and in Karelia several tens of thousands of Swedish citizens fought. In Sweden, as in Switzerland, there were flows of capital from the Hungarian and Jewish bourgeois, from the battle-ridden Hungary, at the end of the war. Yes, and from Germany a lot was taken to Sweden, when the leaders of the Nazis, it became clear that the collapse is inevitable. Especially Goering and his entourage, who brought countless treasures to Sweden.

Switzerland supplied precision instruments, anti-aircraft and automatic guns, provided assistance in financial operations and a transport corridor through the Alps. Swiss national and private banks helped the Nazis to launder stolen valuables - mean so-called "Jewish gold". In addition, the financing of the Nazis went through Switzerland when they had not yet gained power in Germany. The diplomatic infrastructure of Switzerland was used by the German intelligence services to collect intelligence information from around the world. Hundreds of Swiss volunteers served in the SS Reich units, mainly in the Charlemagne, Nordland and Viking divisions.

Portugal exported tungsten and was used for transit of goods important for the Third Reich. Allowed to use its territory for the secret deployment of naval bases and testing grounds of the armed forces of Germany. Spain sent the “Blue Division” against the USSR and exported to the Reich part of the oil, which, with the consent of the United States and Great Britain, it received from Latin America. American companies that actively created the power of the Reich in the pre-war period, continued to cooperate with the Reich, even when the United States officially went to war with the Germans. The Vatican took a sharply negative position towards the USSR, in fact, the papal throne also supported aggression against the Union.

Turkey, which was the traditional adversary of Russia - the USSR, is even strange that it did not fight directly with us in this war. After the attack of the Third Reich on the USSR, the Turkish government declared partial mobilization, strengthened the work of the defense industry, concluded a trade agreement with the Reich and intensified subversive activities against the USSR, with the help of anti-Soviet organizations located on its territory (such as the Council of Coordination of Caucasian Peoples) Tatars ”and others.).

Norwegian, Danish, Slovak, Croatian, Dutch, Belgian and French armed units fought against the USSR and its peoples, for example: the French SS division Charlemagne; 5th tank SS division “Viking” - its composition was formed from Swedish, Norwegian, Belgian, Dutch volunteers. According to the director of the Institute stories Silesian University Professor R.Kachmarek, author of the book "Poles in the Wehrmacht", on the side of the Wehrmacht on the Eastern Front, killed about 250 thousand Poles.

In fact, it was a war of a united Europe, and the Anglo-Saxons, as always, were left on the sidelines, receiving direct benefits. Hitler had to establish a new border between the united Europe and "Asia" - along the Volga to Arkhangelsk in the north. According to Hitler, this campaign was supposed to complete a significant historical period in the history of Europe - “The poisonous nest Petersburg, from which so long Asian poison exuded into the Baltic Sea, should disappear from the face of the earth ... Asians and Bolsheviks will be expelled from Europe, an episode of 250-year Asian finished…". That is, to finish the time when Russia had a huge impact on European politics.

This idea of ​​"united Europe", opposing the "threat from the East", will then be picked up by England and the USA, after the collapse of the idea of ​​the "German Reich."

We must clearly realize that the Great Patriotic War was one of the most important episodes of the great opposition that has been going on for hundreds of years: the West against Russia, the Russian people. That is why this war has become a fierce battle, the survival of Russia, the Russian people and all the indigenous peoples of Russian civilization were at stake. We must, sooner or later, demand from the West to answer for this world war, its incitement and the massive genocide of the peoples of the USSR. Like other wars unleashed by Rome, London and Washington against us.

We must also understand that the current architects of the “New World Order” are building their plans, as Brzezinski pointed out, at the expense of Russia, despite Russia and on the ruins of Russia. All the wars and aggression of the last decades, including the war in Libya, are all pieces of a giant mosaic, elements of the Great Game are the battlefield of the Earth, and Russia and its people are the key Player in the "heart of the planet." Silently yielding to the enemy, we betray all the generations of our ancestors who put the enemy in their place, building their own world.

We are in Yandex Zen
History of the Air Force and Air Defense of Yugoslavia. Part of 10. NATO aggression against the Federal Republic of Yugoslavia. Part of 1
Diplomats of the People's Commissariat of Defense: on the eve and during the war
46 comments
Information
Dear reader, to leave comments on the publication, you must to register.