On the "massive betrayal" during the Great Patriotic War 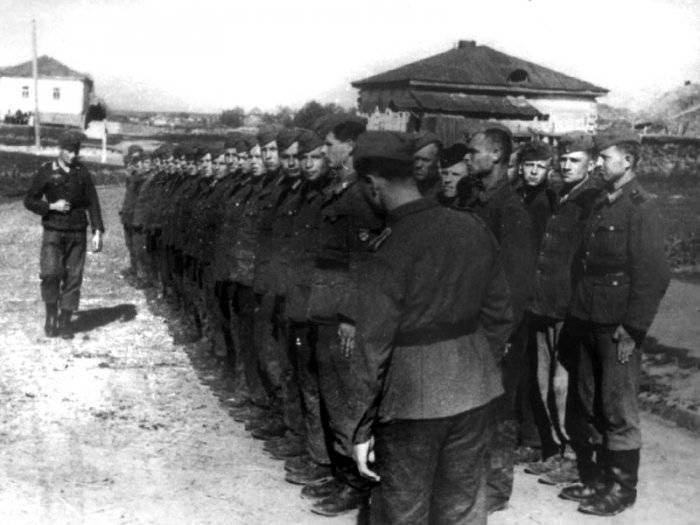 In connection with the important dates for Russia, its peoples, there is always an intensification of various kinds of “internal enemies”, who are trying in every way to diminish the victories and achievements of our civilization. It is advisable to cross them out altogether, such as the statement by political analyst Sergei Karaganov that “after the last 100 years, the people of Russia have almost no respect for themselves”. And that the entire Soviet period stories - This is one big crime, and the USSR is a criminal state, the same as Hitler's Reich. In a series of such statements, they like to raise the topic of the “exorbitantly high price” that the USSR had to pay for the Victory. Here you can also write “black myths” about the penal battalions, the NKVD detachments, “heaping up corpses,” “with a rifle against tanks" etc.


There is a purposeful, professional psychological suggestion that our people are not a winner in this cruellest war, but the victim of that war, the topic of a massive transition to the side of the enemy of Soviet citizens became an excellent percussion mechanism of this information war. Like, they hated the Soviet regime so much that they were ready to go over to the side of the enemy. One of the founders of this mythology is reasonably considered to be A. Solzhenitsyn: “How many wars did Russia wage (it would be better to have less ...) and did many traitors know in those wars? Has it been observed that treason was in the spirit of a Russian soldier? And with the fairest peace in the world, a just war broke out, and suddenly millions of traitors from the simplest people. How to understand this? How to explain? He was supported by other authors, for example, a supporter of the hypothesis about Stalin’s preparation for a strike against the Third Reich, I. Bunich. Talked about the millions of Hitlerites who had gone over to the side, or who abandoned weaponnot wanting to defend Stalin’s “bloody regime”.

And these poisonous myths, laid down on the fertile soil, lack of awareness of the Soviet people, who in the years of "publicity" and "democratization" of 80-90-s "swallowed" these myths with a bang. The lonely voices of those who gave more real facts, confirmed by serious research, were hardly heard. And only from 2000-s began to appear much more serious scientific, popular science literature, which allows to reject this mythology about the "war".

Even the thesis that during the Great Patriotic War for the first time in Russian history there was a massive transition to the side of the enemy is highly questionable. A lot of earlier examples can be found in history: in the period of internecine wars and feudal fragmentation in Russia, betrayal was common, as the boyars in the Galician-Volyn land did not hesitate to betray their princes, leading backstage negotiations with the Poles and Hungarians. In the years of the Time of Troubles, the Cossacks, the boyars, the nobility swore allegiance to various impostors, the Polish prince. In the years of the invasion of the Swedes, led by Charles XII, Zaporozhye Cossacks and Hetman Mazepa are taking their side. During World War 1812, in the Vilnius, Grodno and Minsk gubernias, Prince R. Gedroits assembled 20 thousand troops, who had gone over to Napoleon, and local Orthodox priests, at the direction of the head of the Mogilev Diocese of Varlaam, took the oath of allegiance to Napoleon Bonaparte and conducted prayers to Napoleon Bonaparte and carried out prayers and wages.

The factor of a number of small nations that Stalin “punished” is also not new — the Crimean Tatars helped the interventionists during the Crimean War. During the First World War, Germany, Austria-Hungary, and our "allies" in the Entente, actively used the "national map" against the Russian Empire - they supported and trained various separatists and nationalists of Poland, Finland, the Baltic States, Ukraine, Caucasus, Central Asia. Recruitment was also carried out among prisoners of war, of whom there were also quite a few - 3,6 million people from 15,4 million mobilized for the war.

That is, in the Great Patriotic War, there was actually nothing new in this regard - just the war was the most terrible, large-scale in the whole history of mankind. Therefore, the scale of these negative phenomena is also large. After all, 34,4 million people were called in. They had to leave vast territories with tens of millions of inhabitants. Collaborationists have about 1,5 a million people, not millions, as some authors like to say, including various national legions, combat and support units, and the police (about a third of all traitors). Of these, in fact, the Russians from the central regions of the USSR occupied by the enemy, approximately 300 thousand.

In addition, we must take into account the fact that most of them were not reliable comrades, for the Nazis, many at the first opportunity tried to escape to the partisans, or through the front line. Actually, the enemies who were ready to flood their people were an insignificant part. Many were ordinary people who wanted to survive in captivity, in the occupation, opportunists. The toast of the deputy chief of the police of the Sapychsky volost of the Pogarsky district in the Bryansk region, Ivan Raskin, speaks well of internal motives of this kind of opportunists: “We know that the people hate us, that they are waiting for the Red Army to come. So let's hurry to live, drink, walk, enjoy life today, because tomorrow we still pootryvayut heads. ” This was taken into account in Moscow, given the relatively low level of repression against collaborators.

It is necessary to compare what happened in other countries, and "do not sprinkle ashes on his head." So, from 6 million of the French army, almost all surrendered themselves, or by order of the command, then up to 1 million French people fought for the Third Reich in Europe and against the USSR, in North Africa. This is in France, where they did not destroy prisoners of war, like ours, there was no mass genocide of civilians, as in the USSR. And the power in France was previously democratic, it seems there is nothing to blame the French for — collectivization, repression, dispossession, rasskazachivaniy, as in the USSR was not.

Plus, we must take into account the fact that the “voluntary” principle of participation in such formations was very conditional. Many had to choose death, or "voluntary" service to the Nazis. Many chose death, but weak people are always more in percentage terms. So, even many Lithuanians, among whom there were not many supporters of Bolshevism, were hiding from the “voluntary” conscription to the woods, for this their relatives were repressed to the point of execution. From the "voluntary" service in the army of the SS tried to evade the majority of officers of the pre-war Latvian army. What is "forgotten" in the modern Baltic.

Confirmations that the Russians tried to fight to the end, and not thousands of them surrendered, can be found among the Germans. So, Colonel-General F. Halder wrote on his 8 day, in his diary: “Information from the front confirms that Russians fight to the last man everywhere.” General Blumentritt, attacking Minsk, noted: “The behavior of the Russians, even in this first battle, was a striking contrast to the behavior of the Poles and the Western allies, when they were defeated. Even being surrounded, the Russians fought for their positions and fought to the end. ”

Confirms the fact of the internal unity of Soviet citizens and the fact that the Nazis miscalculated the possibility of a strike on the USSR from the inside - a “fifth column”, a possible social revolution, after a strike from the outside. Already the first weeks of the fighting showed that with the “colossus on clay feet,” there was a slip.