"Armata" - the tank of the future

21 2011 June
62
For many years, Russian tankers associated their hopes for re-equipment with the “Object-195”, which was widely advertised, and the specialists of the Ural Design Bureau of Transport Engineering (OJSC “UKBTM”) were close to implementing the project and putting it into production. But in 2010, funding for the project "Object-195" was frozen, and already in the current year the Ministry of Defense of the Russian Federation announced the cessation of further work on the creation of the expected project. The reasons why the work was completely stopped were called two - the failure to comply with modern requirements for tanks, and high total price. As an alternative, work began on the Armata project - a tank that will be the best in the world, as they say in the Ministry of Defense. But is this so, and what are the true reasons for the refusal of further work on the almost finished project "Object-195"?

As you know, work on the creation of the T-95 tank (“Object-195”) was started in the Uralvagonzavod design bureau shortly before the collapse of the USSR. According to the plans, it was supposed to be a completely new tank, which combined a high degree of protection of the crew and completely new means of firing. As the main protection of the crew, an airtight capsule was to be used, which separated the people ’location from the ammunition storage area and weapons.

For a long time, all work on the creation of the T-95 was strictly classified, and only after the construction of the first test prototypes did the tank become aware of a wide range. This year were published the first photos of one of the prototypes. The combat vehicle was extremely unusual. The tank visually looks taller and bigger than T-90A. The first thing that catches your eye is its excellent security. Between themselves, the testers called the T-95 "Iron Kaput", many who saw the pictures for the first time were truly surprised by the unusualness of the new tank. 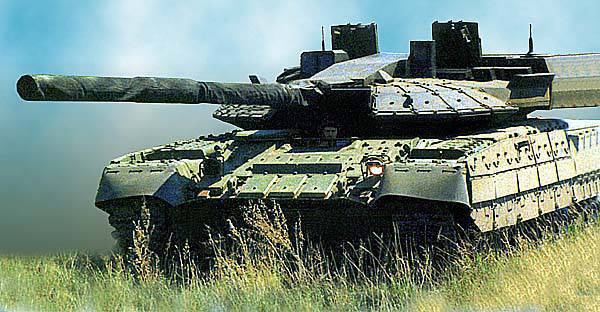 The T-95 tank has a unique layout - the crew is housed in a separate armored capsule. Armament and full ammunition - in a separate fully automated combat compartment. The engine compartment is also located in a well-protected aft. The tank is protected in the frontal projection, enhanced protection is also on the sides and on top. The tower is uninhabited, with this in mind, made in a rather narrow form. The main armament (smooth-bore 152-mm gun, capable of firing guided missiles) is located in the tower and is located quite high, which is also an advantage. When firing from barriers, it is enough to push the barrel and observation devices, while the entire tank is in a protected area.

The machine is equipped with a powerful (1600 hp) diesel engine and hydromechanical automatic transmission. Taking into account the external overall size, the weight of the tank is relatively small - 55 tons, which makes it possible to speak of its excellent maneuverability.

The power of the sub-caliber projectile fired from the T-95 gun makes it possible to penetrate the defense of absolutely any NATO tank at all points of the frontal projection and destroy the enemy’s armored vehicles with virtually one aimed shot. The crew receives all the information about the situation on the battlefield from the thermal, television and laser sensors directly on the monitor screen. Current operational information about the interaction with other tanks, as well as tactical tasks of the command are also displayed on the screen, which allows the crew to constantly monitor the situation.

But, despite the excellent performance, the Ministry of Defense of the Russian Federation decided to abandon further work on the creation of the T-95. The main reason is the high price, according to unofficial information - the tank does not meet the requirements for modern weapons. This became clear from the unflattering recall of the commander of the Ground Forces Postnikov, who called the T-95 just another modification of the T-72 and nothing more.

The hypothetical image of the tank "Armata". The author of the tank is named as "T-99" Priority. "The figure was created based on images of a promising modification of the T-90 tank, the author Aaron Sheps based on information from Gur Khan, http://otvaga2004.mybb.ru, http: // alternathistory. org.ua, 2011

Along with the announcement of the cessation of work on the “Object-195” from the Ministry of Defense, there was also a message about the commencement of work on the creation of a tank under the code name “Armata”, which should become the main tank of the Armed Forces of the Russian Federation. A specific task has been set before the designers - by 2015, the tank should be on the production line. The Ministry of Defense backed up its tasks with quite generous funding, which makes it possible to speak of a serious approach to the implementation of the program.

At the same time, experts are confident that creating a fundamentally new machine in such a short time will fail, and, obviously, the Armata will be a modified and refined “Object-195”, but somewhat cheaper, which means it is easier both in terms of protection, and the firing system.

As the former first deputy chief of the Armored Armed Forces Directorate of the Defense Ministry, Lieutenant-General Y. Kovalenko, stated, “in the future, the Armata tank should become the main combat unit of the Russian Ground Forces armament.”

In the automatic loading of the new tank will be 32 ammunition for various purposes, and the combat vehicle itself will be able to fire while moving. According to Kovalenko, in the “Armata” the design techniques of the MBT of several other projects, including the “Black Eagle” project, will be applied. Other tactical and technical details of the perspective tank Kovalenko did not elaborate, but you can try to present his appearance. Undoubtedly, the tank "Armata" will have less weight than the "Object-195", within 50 tons. The chassis will use the traditional for Russian tanks system with six, rather than seven, as in the “Object-195”, pairs of road wheels. In order to reduce the final price, as well as simplify production, it is possible that designers will abandon the use of titanium armored alloys.

It is assumed that the "Armata" will be armed with a proven 152-mm smooth-bore gun. The same tool is used on the new version of the T-90AM. The capabilities of this gun are sufficient to destroy any NATO tank.

Based on the above information, we can conclude that the Armata really has every chance of becoming the main tank of the Russian Armed Forces, the only thing that can hinder the implementation of the project is the unpredictability of officials from the Ministry of Defense who can stop work at any time. Unfortunately, there are examples of this.

We are in Yandex Zen
The predecessors of the tank "Armata"
Middle tanks in the postwar period. "432 Object"
62 comments
Information
Dear reader, to leave comments on the publication, you must to register.