18 2014 June
45
Izhevsk concern Kalashnikov, part of the Rostec state corporation, takes part in the EUROSATORY 2014 International Military Exhibition, which is being held in Paris. The exhibition runs from June 16 to 20. Traditionally, the venue of this exhibition is the exhibition center Paris Nord Villepinte. This year the Russian weapons The concern has stockpiled its latest products for Paris by presenting immediately 3 samples of civilian small arms.


At the exhibition in France, Kalashnikov also presented its most famous models of military weapons - Kalashnikov assault rifles in all available calibers, the Vityaz-SN submachine gun, the Dragunov sniper rifles of the SVD and SVDS, the new SV-98 and SV- sniper rifles The 99, the under-barrel grenade launcher GP-34, the 18,5 KSK combat shotgun and even full-fledged guided artillery armament complexes are “smart” shells “Kitol-2M” and “Krasnopol”.

Also at the exhibition EUROSATORY 2014 "Kalashnikov" brought a modernized version of the pistol Yarygin caliber 9x19 mm, as well as a small-sized self-loading pistol PSM production Izhevsk Mechanical Plant. They brought the legendary PM, which has undergone modernization. In Paris, the PM with stores of increased capacity - on 10 and 12 cartridges. At the same time, most of the serial samples of the Kalashnikov concern acquired a new look. At the Paris exhibition, the Russian manufacturer of small arms is going to demonstrate the possibilities of increasing the functionality of standard submachine guns and machine guns with the help of various mounted devices and devices, modern sights.

Saiga MK107
In addition, the concern immediately introduced 3 news, designed for the civilian market of small arms. We are talking about the Saiga MK107 carbine, Saiga-12С EXP-01-030 and Saiga-12 shotguns. 340 12 caliber, Saiga-9 carbine. In addition, the Kalashnikov brought to France a new sports rifle, the Record-338, and other samples of its products. The Kalashnikov Concern considers the exhibition, which is now taking place in Paris, one of the most successful platforms for displaying its products and holding negotiations with business partners and potential buyers. Specialists of the concern expect to hold a series of business meetings with representatives of European countries, countries of the Middle East, South and Southeast Asia and North Africa.

All three brand new models of civilian small arms were developed on the basis of existing models of military automatic weapons, the adviser to the general director of the Kalashnikov concern, Andrei Kirisenko, told reporters about this.

Thus, the Saiga-MK107 carbine was developed based on a promising model of the AK-107 submachine gun. This carbine borrowed from its combat counterpart a system of balanced automation, which makes it possible to achieve an increase in the accuracy of fire immediately 1,5 times compared to other Russian and foreign analogs of small arms, presented in this class. At the same time, the reliability indicators of the Saiga-MK107 carbine remained at the same very high level, noted Kirisenko. According to him, a number of prototypes of the new carbine have already been released, including under the common foreign cartridge .223 Remington ("Remington"). In addition, it is also planned to create versions of the Saiga-MK107 carbine under the Russian 5,45x39mm and 7,62x39mm caliber cartridges, as well as under the NATO ammunition 7,6251mm. 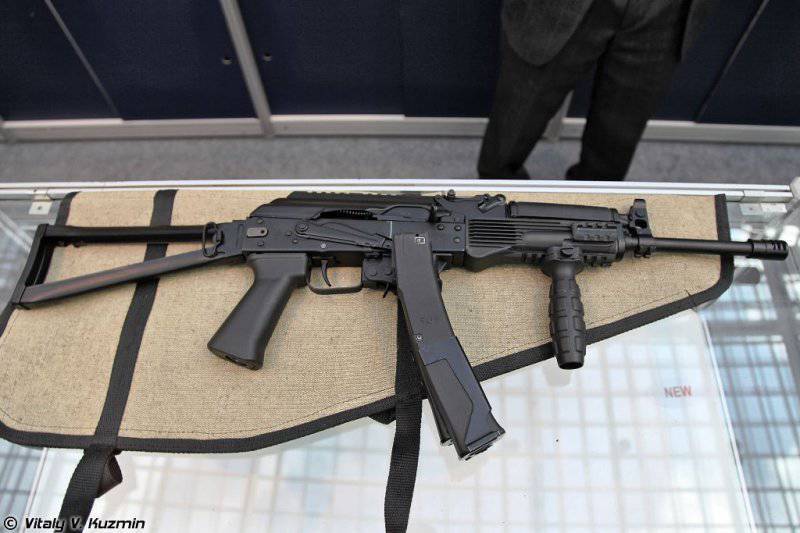 Saiga-9
Andrei Kirisenko also noted that the Saiga-9 carbine is based on another Russian development - the Vityaz-SN submachine gun, which is a novelty for both the Russian and foreign markets. Currently, the Kalashnikov concern is working to adapt the carbine under the 9x19 mm Parabellum cartridge common in Europe. Also in the very near future it is planned to develop a carbine "Saiga-9" and under the domestic pistol cartridge 9x18 mm, as well as a new ammunition 9x21 mm. This development of Izhevsk gunsmiths has a high level of reliability, and a very high level of similarity of a carbine with real-life models of military weapons may attract increased attention of Russian and foreign buyers, notes Andrey Kirisenko.

If we talk about the Saiga-12 hunting rifle of the 340 model for the wide-spread caliber 12 cartridge, then, according to the adviser to the general director of the Kalashnikov concern, during its development, the requirements of special forces representatives and athletes were taken into account. According to representatives of the concern, the new gun favorably differs from the previously presented samples of the magazine's increased to 10 cartridges volume, the reinforced receiver, as well as the new quick reload system. A muzzle brake mounted on a gun can significantly reduce the recoil force. At the same time, an increased level of weapon reliability allows it to be used both by police and army units. 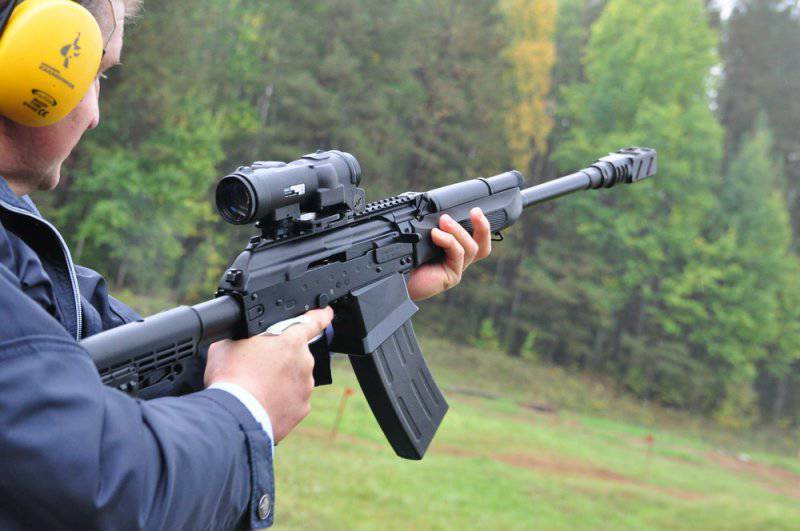 Saiga-12, model 340
In addition, according to Andrei Kirisenko, in the near future, the Kalashnikov concern plans to begin producing a new line of accessories for civil and military weapons. According to him, first of all, we are talking about telescopic butts, adapters for sights and forend of the Picatinny standard, various assault arms. In addition, the Kalashnikov concern seriously expects to master the production of various aiming devices. Kirisenko told reporters that negotiations are currently underway with a number of domestic companies to produce these accessories for small arms. He also does not exclude that in this issue “Kalashnikov” can establish cooperation with foreign companies. Kirisenko noted that the concern’s product samples would not be inferior to the products of the American company Magpul Industries in terms of the quality of workmanship.

Ctrl Enter
Noticed oshЫbku Highlight text and press. Ctrl + Enter
We are
The action “Military service under the contract is your choice!” In Rostov-on-Don: future contract servicemen, exhibitions and “Russian Knights”Experimental and prototype weapons of Izhevsk Machine-Building Plant (assault rifles and rifles)
45 comments
Information
Dear reader, to leave comments on the publication, you must to register.