August 19 2013
27
I can not believe that warships could look like this. It seems that they were painted by clowns lagging behind the traveling circus. Complete asymmetry, stripes and cells. Unexpected diagonals and different bright colors. But almost 100 years ago, the court masked it that way. 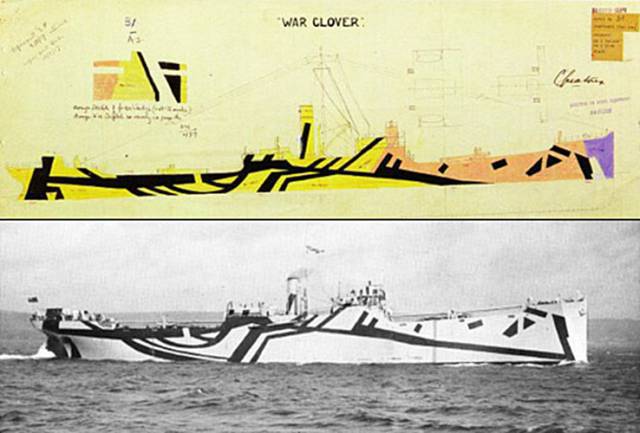 There are no color photographs, but sketches have been preserved. Can you imagine how the ship “War Clover” looked like in reality?

During the First World War, the British and Americans, and the French, too, faced a serious threat to German submarines, which with enviable success sank allied ships.

All attempts to disguise ships at sea failed because they could not adapt this or that camouflage to the ever-changing water and sky. Any combination of colors that hid in one situation, issued headlong in others.

And then the British artist and naval officer fleet Norman Wilkinson invented a new disguise scheme, which was based on the fashion trends of the visual arts of the time, above all Cubism.

The author of the idea of ​​"dazzling coloring" Norman Wilkinson

Instead of hiding the ship, trying to paint it entirely in some colors similar to the environment, Wilkinson suggested painting the ships abstractly - “breaking” the hull with unexpected lines, creating illusory planes, angles, and so on.

The idea was adopted. The British called the innovative masking technique "dazzle painting" ("Dazzle Painting"), and the Americans - "turmoil" or "mess" (Razzle Dazzle). And it worked. 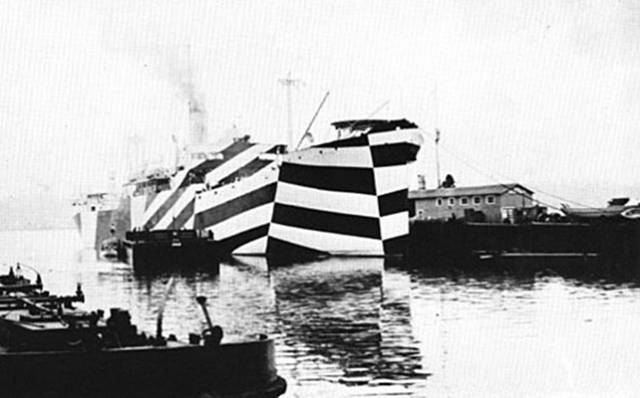 The fact is that the German submariners were forced to find the enemy visually and were aiming not at the ship itself - it was moving, but trying to send a torpedo to the place where the ship would be at the time of the projectile arrival. Too early or late start naturally meant a miss. 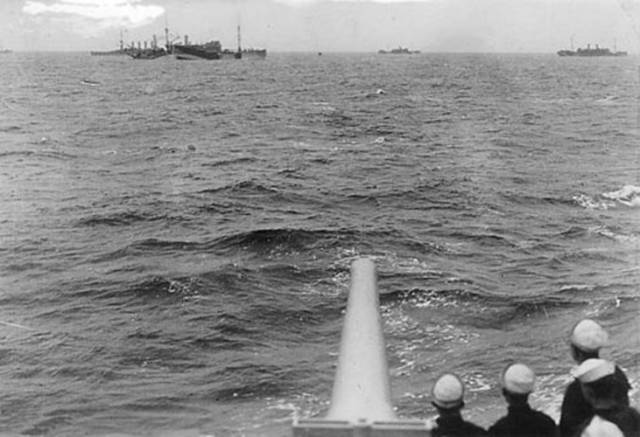 Sailors are trying to see what it is there. It’s really incomprehensible where the nose of the vessel seen far away is.

Accordingly, the submarine captain needed to determine the course and speed of the target with maximum accuracy, but by what he saw in the periscope, it was difficult to even understand where this ship has a nose, how many noses, and what it is.

The silhouette just blurred. The vessel could seem smaller than it actually was, it partially merged with the water, “connected” to the sky, and so on. In short, the devil knows what. 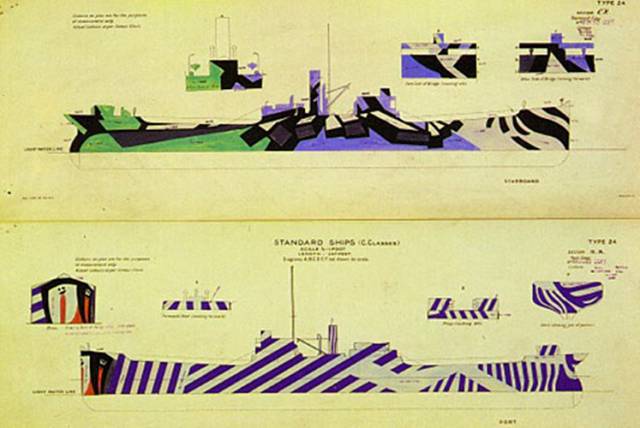 Type a standard ship coloring number 24. And this is one and the same vessel, only from different sides.

It should be noted that for the design of camouflage real artists were involved. At first, almost every ship had its own distinctive “cubic” color, and often the designs on different sides differed greatly.

Later, in the course of the war, standard types and types of artistic disguise were developed, and not only military but also passenger ships began to receive abstract coloring. 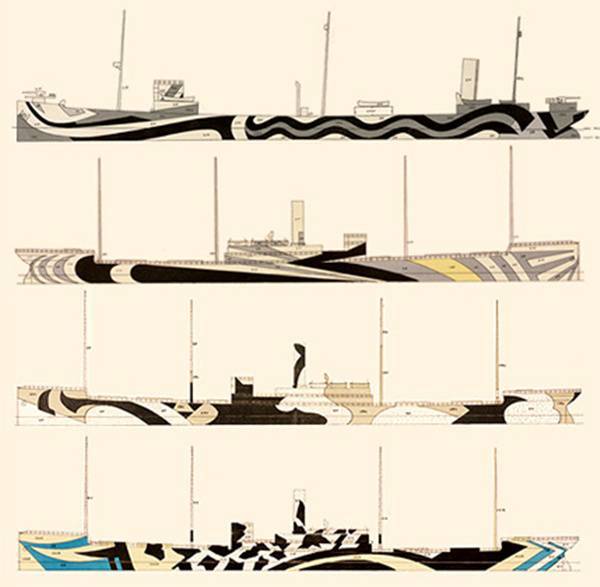 Unfortunately, there are no color photographs of the ships of that time, but they were not “zebras” - they were masked in different and sometimes very bright colors. They say that at sea the convoy of these “parrot ships” looked simply overwhelming.

With the end of the First World War, the massive use of "blinding painting" in the navy was also completed. There were several reasons for this.

So, effective aviation - from the air the painted ships were very clearly visible. In addition, the sailors themselves never particularly liked painting their ships in such a "non-military way." 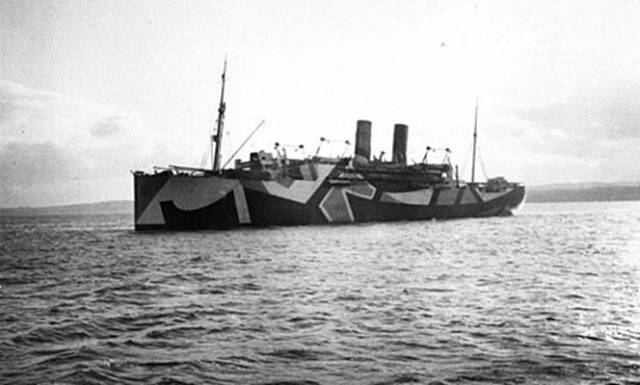 Ship SS Melita - even now in the Museum of Mayakovsky.


The US Navy, like the British, tried to return to the "turmoil" at the end of World War II — after they destroyed Japanese aircraft. They really defended their vessels with “painting” from enemy submarines (incidentally, experiments were carried out with tanks and jeeps)

However, the third coming did not happen - improved radar, sonar and other equipment, ultimately, eliminated the need for visual detection of targets.

Passenger ship Mauretania. Judging by the image on the poster of those years - it was a bright ship.

Thus, the warships quickly repainted in its current, "foggy gray" color, and cubism returned to where Wilkinson took it. 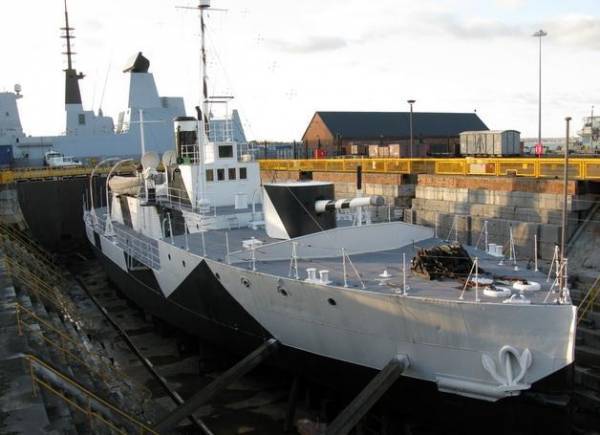 Now in Portsmouth is a sample of such a disguise: the ship HMS Monitor M33. It was built in the 1915 year, although it looks relatively modest, it fought in World War I and even in the Civil War (together with six other monitors, it supported white troops in the Arkhangelsk region for several months). 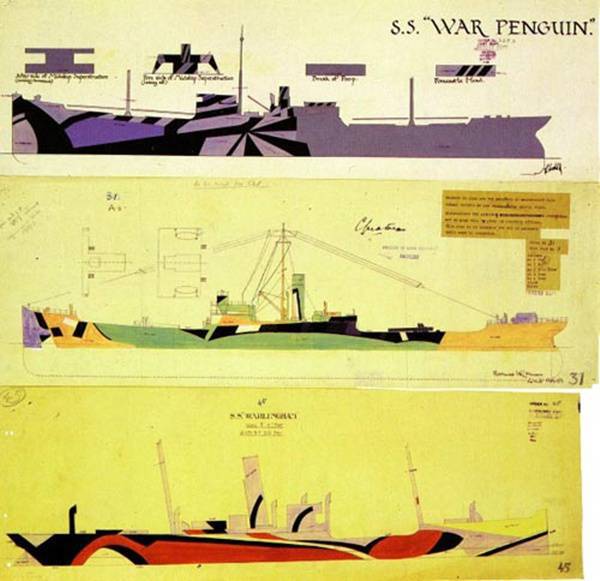 Speed ​​was the key point of verification: if this camouflage is not relevant for ships, highly mobile combat vehicles carrying “abstract art canvases” can now be misled by enemy soldiers.
The fact is that our perception of speed depends on many different factors. For example, it seems to us that larger objects move more slowly. In the experiments of Mr. Scott-Samuel and colleagues, volunteers showed on the screen a pair of geometric images that had different contrast and moved at different speeds. One of the two elements has always been a typical representative of the texture of “glare” camouflage.

It turned out that the speed of two fast-moving contrast figures from the camouflage set visually seems to be less by 7%. Thus, a fighter armed with a hand-held anti-tank grenade launcher may not calculate the distance and miss the armored vehicle painted using the Wilkinson method, the researchers believe.