The first in the history of the mention of the use of dogs in armed conflict is in the myths of ancient Egypt. It was in this state that the most vicious representatives of the dog world were specially selected and prepared to take part in battles. Thanks to dogs, for many years the pharaohs felt safe, as their faithful guards, dogs, served in the palaces, and in times of war set them against attacking enemies, and with their teeth and claws, dogs turned the battlefield into a bloody mess, and enemies, throwing weaponrushed away.


During the First World War, 300 tailed and toothy combat units served in the Russian army. In the Soviet Union, the first cynological service at the People’s Commissariat of Defense was formed in 1924 at the Shot training courses. Already during the armed clash on Khalkhin Gol, specially trained dogs - fighters fought against the Japanese army tanks, as well as communication dogs. During the Soviet-Finnish war, special draft dogs were added to them - a team consisting of several dogs could transport a Maxim machine gun with combat crew or take out wounded soldiers from the battlefield. Ever since imperial times, it was customary to breed communication dogs and ammunition carriers - Airedale terriers as dogs. “The main breed in the service of the Red Army is only the Airedale”, - it was written in 1935 in the “Directory of the Red Commander”. Just before the outbreak of World War II, the military of the USSR made the main bet on German shepherds, which are more versatile and perfectly trained, if you choose from many other dog breeds. 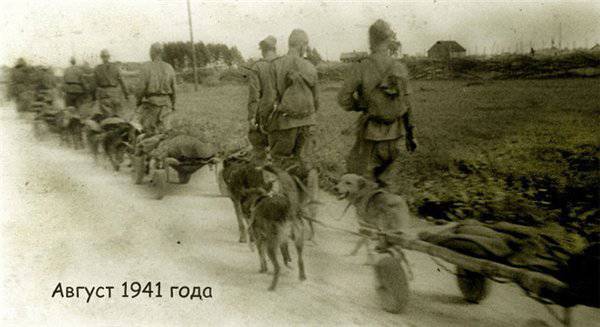 During combat battles in World War II dogs differed repeatedly. According to official statistics alone, they have destroyed more than 300 German tanks in their valuable lives. The only case where the dog remained alive after performing a combat mission was a fascist train derailed by a German shepherd dog named Dina. The reason why the dog Dina remained alive, is easy to explain. Dogs with different military specialties have completely different working methods. Tank destroyers were trained as follows: they did not feed for two days, and then they put a bowl of food under the tank. Special operations on the railway were carried out a little differently. The dog was supposed to deliver a load of explosives to the rails, unhook it on its own and escape before the train arrives. Dina managed to do it.

Starting from 1960, the Soviet Central Military Technical Specialized School of animal trainers is located in the village of Knyazhevo, located near the town of Dmitrov. It was in this breeding kennel called “Red Star” during the cold war that the breed was bred - the Russian black terrier, which became the answer to the German Shepherds in the service in the NATO army. Today it is the 470 th methodological and canine special center of the RF Armed Forces. Last year, the staff was halved, but after the explosion at the Domodedovo airport and other terrorist acts, they decided to restore the previous number of employees. The center consists of three battalions, which in turn consist of three companies each.

The canine special center is headed by Lieutenant Colonel Dubrovsky. “Different breeds of dogs are already adapted by nature itself for some works, worse for others. Labradors and spaniels are more suitable for search-and-rescue and mine-searching services, preference is given to bitches: they are more balanced and calm. All types of shepherd dogs are ideal for guard duty, as well as the black terrier, the Moscow guard dog, the Rottweiler. For the investigative service, only “Germans” are used, moreover, males: they are stronger and more evil, - says Lieutenant Colonel Dubrovsky - All dogs that are in training have their own allowances, according to weight: up to 25 kilograms - 300 grams of feed per day, up to 45 kg - 600 grams, very heavy - a kilogram or more, and of this amount about 40% is meat, the rest 60% is cereals. In the summer, instead of the obligatory canine vitamins, nettle is added to the daily ration of the four-legged defenders of the fatherland. ” 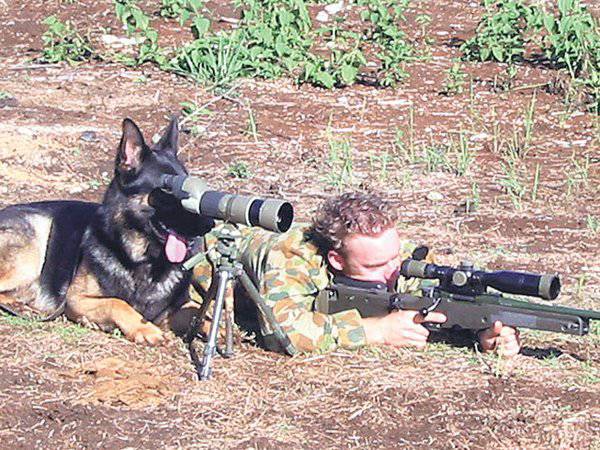 But if the dogs are in the special center all their service life, and this is 7-8 for years, then the soldiers pass military service there. The command, of course, prefers to get into the service from the draft posts of zootechnicians or veterinarians, but in reality it is necessary to serve with the one who comes. The main problem is that the soldier serves a year, and the dog is eight times more, but in most cases everything usually ends quite well, and the soldier with the sponsored dog lives, one might say, soul to soul. It so happens that during service, soldiers become attached to animals and even during demobilization they are asked to release their pet as a civilian, but a military dog ​​is the property of the state and is on the balance sheet, just like military equipment. It is necessary to part, it is necessary to recognize that for people it is much more difficult than for dogs, which in two weeks recognize a new owner. Everything is simple and concrete for them: the one who feeds is the owner.

Today the center trains dogs and prepares soldiers in four main specialties: search and rescue, mine search, search and guard service. The easiest in terms of training, of course, is the last, after six months of intensive training, the guard dog and soldiers leave for the troops to serve in the protection of military facilities. For other specialties, an advanced course of study is required, which lasts at least a year. The most difficult and responsible training - in search and rescue dogs. During the test, the dog must find at least five out of seven people under the rubble.
Ctrl Enter

We are in Yandex Zen
The most faithful friend. Dogs in the service of people from antiquity to our time
Dogs on the fronts of the Great Patriotic
Add a comment
Information
Dear reader, to leave comments on the publication, you must to register.