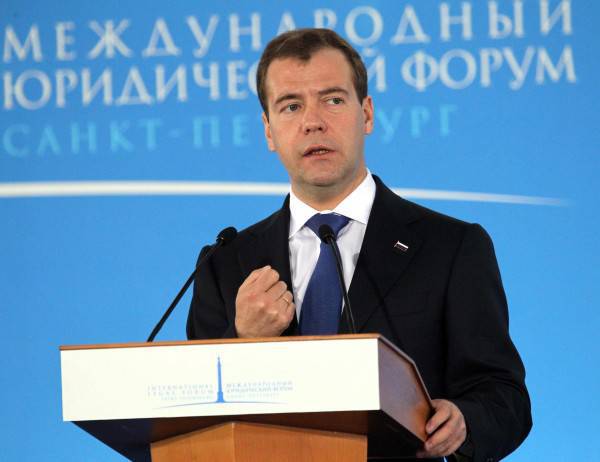 At the opening of the St. Petersburg International Economic Forum, President Dmitry Medvedev gave a speech in which he assessed the current state of the country's economy and described the main tasks of its modernization. One of the most prominent points of his speech was the rejection of the so-called. "State capitalism".


This is the XV International Economic Forum, which is dedicated to the problems of the world economy. According to D. Medvedev, the country has made great progress in its development over the past 20 years, so if in the Soviet Union the share of the private sector was approaching zero, now it is more than 60%. The state debt, which exceeded the state’s annual GDP by one and a half times, has now decreased to almost 10%. True, the president did not say about the corporate debt. As usual, the head of state lied about inflation, which, according to him, “was replaced by quite moderate rates of price growth.” Although the citizens of Russia, who are in grocery stores every day, clearly can fix it, but only who will give them the floor. According to him, the real consumption of citizens of the Russian Federation has doubled, although, according to Rossstat, about three-quarters of the population of the Russian Federation are low-income or most needy citizens.

It’s hard to understand that in the head of the Russian president, when he says: “You can enumerate a lot more, it is always nice to talk about what has been done. The main thing, it seems to me, is in one thing: we consistently and systematically - as far as possible, of course - moved forward. ” Where to go? For some reason it does not say how many thousands of villages, schools, kindergartens, libraries, houses of creativity, factories, agricultural enterprises, etc., have been destroyed. How many millions of citizens were brought to the graves by socio-economic genocide. How many billions of full-bodied rubles stolen. Moscow even homelessness, which is currently at the level of homelessness after the Civil War and World War II, can not win. Or do not want?

According to Medvedev, “Russia has preserved and even strengthened its leadership” in the field of space, although it is well known that the current Russian space is a legacy of the USSR and there are no new projects there. The same GLONASS - the first satellite of this system was launched by the USSR into orbit as early as 12 of October 1982. Leadership in the field of nuclear construction was also created in the USSR, it remains surprising, as it did not lose - apparently, due to the profitability of the industry.

Or this phrase: "We began to spread best practices throughout the country." Here the president, apparently, had in mind the practice of lies. Since paperwork simply drowned the country, everyone creates a portfolio, projects, etc., creating the appearance of intense activity, although the country has degraded and degraded.

The most significant messages

- According to the president, Russia is ready to join the World Trade Organization this year. Although many experts believe that the Russian Federation does not need to join this organization - it will be a serious blow to the already weakened economy of our country.

“I would like to state here very clearly that we are not building state capitalism,” for citizens of the Russian Federation this news will not be particularly joyful if it is deciphered. This means that Russia is waiting for "privatization-2", those enterprises that remained in the hands of the state will be transferred to private hands. Medvedev said that the current privatization plans are too modest, they will be expanded, the state will get rid of controlling and even blocking stakes. The state will even more distance itself from solving the problems of citizens, this will finally become their own task. And while Mr. President is going to fulfill these wishes, it is not clear: “The state should also create a system of social protection and public services that would stimulate Russian families to increase the number of children, to a healthy lifestyle, to continuous education, and finally to a long and fruitful work. " Not a single system in the West has coped with this - almost everywhere there is a decrease in population, not counting the States, where population growth is at the expense of migrants. Or is it our way? Gradual change of indigenous peoples to international biomass. Yes, and with a healthy lifestyle in the West from the hands of very bad - obesity, beer alcoholism, the growth of drug addiction, the growth of the mentally ill and other "delights" of Western civilization. And the best education system was the Soviet one, which is so diligently broken.

- In the same vein, Medvedev proposed to decentralize power, increasing the powers of municipal authorities.

- Medvedev decided to continue Kudrin’s policy and continue to “stock up,” as he called, “easy money” that came to Russia because of rising prices for raw materials, saving them. Although it is clear that the available finances should be invested in development, their “accumulation”, besides not in our system, can lead to their instant disappearance.

- Medvedev announced the future creation of a "capital federal district." We are talking about "the creation of the Moscow federal district, which goes beyond the traditional borders of Moscow, and with the transfer of a large share of the administrative functions of the federal level and, accordingly, state institutions, over these borders." And turn Moscow itself into an International Financial Center (MFC).

True, Moscow Mayor Sergei Sobyanin clarified that we are talking about the transfer of a number of federal agencies beyond the borders of Moscow, and not about the unification of Moscow and the Moscow Region. Presidential Aide Arkady Dvorkovich said that most of the government agencies would be taken outside the city.

We are in Yandex Zen
The bluff of Western "well-being"
What we lost
30 comments
Information
Dear reader, to leave comments on the publication, you must to register.