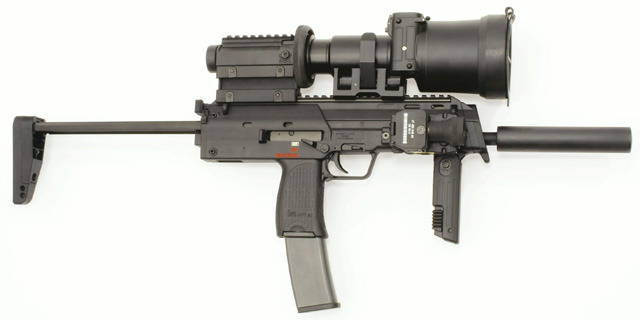 Submachine gun Heckler - Koch HK MP7, developed at the end of 1990 by the German company Heckler and Koch, according to the classification adopted in the west, belongs to a new class of rifle weapons - Personal Defense Weapons (Personal Defense Weapon - PDW), and is designed to arm military personnel who are not supposed to have a full-fledged assault rifle, that is, crews of military equipment, weapons calculations, etc. Previously, pistols or submachine guns for pistol cartridges were used to arm such servicemen, but the massive use of personal protective equipment (body armor, helmets) sharply limited the effectiveness of weapons for a standard pistol cartridge.

In this regard, in order to increase the effectiveness of individual weapons, the development of new weapon systems began, consisting of compact small arms (pistol or submachine-gun class), but with new reduced caliber cartridges with pointed high-speed bullets with increased penetrability. The first such system was the Belgian 5.7 complex of SS190 cartridge, Five-seveN pistol and P90 submachine gun. The German-designed HK MP7A1 submachine gun became the second serial representative of the PDW class weapon - it was launched in the 2001 year, and it began to be used by some German special forces, and from 2006, it was adopted by all German Armed Forces. Since 2005, the HK MP7A1 submachine gun has been in service with the UK military police. In addition, MP7 competes with FNP90 for a place in the standard weapons system of NATO.

From a technical point of view, HK MP7A1 - automatic weapons under a specially designed cartridge caliber 4.6mm (designation 4.6h30mm chuck, chuck outwardly resembles a smaller cartridge NATO 5.56mm) .HK MP7A1 arranged by type of compact submachine gun, the store is inserted into the pistol grip, folding buttstock, telescopic , in front there is an additional folding handle to hold the weapon with two hands. Automatics HK MP7A1 is built according to the scheme with a gas engine with a short stroke of the gas piston, locking - by turning the bolt. In general, automation and USMHK MP7A1 strongly resemble the corresponding elements of the rifle G36 of the same company. The HKMP7A1 body is made of plastic, with guides on the top of the body for attaching various sights. Fire modes - single shots and turns, the fire mode switch also acts as a fuse and is controlled on both sides of the weapon. The cocking handle is located on the back of the case above the butt, has a T-shape (like the cocking handle of the M16 rifle) and is stationary when fired. The fire is fired from the closed shutter.

Due to the successful layout of the HK MP7A1 with a folded butt and a front handle can be transferred to a holster as a pistol. Shooting from MP7 can be carried out on a pistol (with one or two hands), using the front handle and, to improve the accuracy and accuracy of shooting - with the butt unfolded. This design provides greater, compared with the Belgian FN P90, maneuverability, especially in cramped conditions, which makes the HK MP7A1 attractive not only as a defensive weapon, but also as an offensive weapon for various special forces that need melee weapons that are effective against opponents in body armor. Among the shortcomings of the HK MP7A1, we can note a short butt, which does not provide a comfortable attachment of the weapon, and also, to put it mildly, the controversial effectiveness of small-caliber bullets in terms of stopping action.

From the point of view of the 4.6mm ammunition used, the HK MP7A1 cartridge is roughly comparable to the Belgian-developed 5.7mm cartridge. The initial bullet speed of the cartridge 4.6х30mm is 725 m / s with the mass of the bullet 1.6 g. In the basic version of the equipment, the bullet is all-steel, in a copper case, also versions of tracer bullets are produced. with weighted subsonic bullets, training and others. The release of 4.6x30 cartridges was established in the UK, at the Radway Green plant, owned by BAE Aerospace. Manufacturers and 100 declared% penetration of personal protective equipment standard CRISAT (1.6mm titanium plate plus 20 layers of Kevlar fabric) at a distance of up to 200 meters.

We are in Yandex Zen
Submachine gun Heckler - Koch HK MP7A1 PDW (Germany)
At the forefront
6 comments
Information
Dear reader, to leave comments on the publication, you must to register.