The main strategic property of the state

17 2011 June
5
Each state of the world has its own material reserve - this is a special reserve of material values, which are designed to ensure the mobilization needs of the country, work to eliminate the scale consequences of emergencies, provide state support to various subjects and sectors of the economy, with temporary violations in the provision of essential types of food, fuel and energy. and raw materials. The state reserve is a universal tool for removing various resource constraints in critical situations, the main component in the system of ensuring state security and stabilizing, and in some cases the regulatory factor of the economy. The material stock of Russia is federal, and its action extends to each individual entity that is part of the federation. 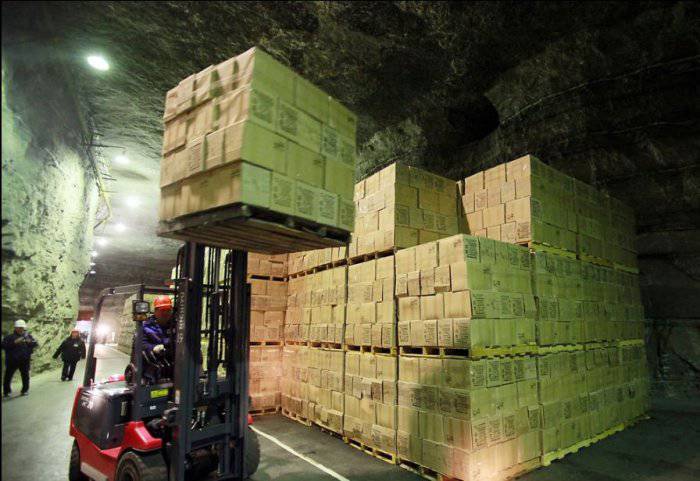 The main purpose of the federal material resource of the Russian Federation is to ensure the mobilization needs of the country. State reserves can be used to protect the country and the needs of the population during hostilities. The task of the Russian federal reserve in peacetime is to ensure the quantitative and qualitative preservation of material values ​​and be ready to execute their operational release on the orders of the government.

History The creation of state reserves began since the reign of Tsar Ivan III (1462 – 1505), it was during this period that defense food and material reserves were created for the national benefit. For the first time in the history of Russia, the list and norms of accumulating material values ​​in stock were established, as well as the order and rules for maintaining their qualitative and quantitative preservation: “Stocks must be created in order to survive the siege for at least three years, and every year at least one third refresh".

In the future, Peter I laid the foundation for a unified system of state reserves, covering not only food and raw materials, but also reserves for the nascent industry. The first state order on the creation of state stocks for the needs of the army was issued 18 February 1700 year and called Proviantsky order. This made it possible to introduce a new service - the recruit and create a regular army, which was already on full state support.

At the very end of the reign of Peter I, a completely new approach was created to formulate the urgent problem of providing the population with food. It consisted in the fact that the efforts of the authorities should not be directed at combating the consequences of accidents or crisis, but at preventing manifestations of "people's needs."

In the USSR, in the 1927 year, a permanent state food, or, as it was called, a grain fund, began to take shape, at first it amounted to 50 million pounds. In the 1927 – 1928 years, taking into account the new economic and political installation, the task of the near future was determined: the formation of a sufficient amount of budget, raw materials, currency, grain, fuel and commodity reserves necessary for the uninterrupted economic maneuvering and supply of forces that ensure the country's defense.

By the decree of the Council of People's Commissars of the USSR on October 17, 1931 was created, for the first time, a specialized body - the State Reserve Committee at the Defense and Labor Council (Reserve Committee), which united all the main functions of managing state reserves.

The Reserves Committee was obliged to carry out accurate quantitative and qualitative accounting of reserves, as well as to monitor the most economical expenditure strictly within the plan approved by the government. The State Reserve was first used to combat the unprecedented famine in the 1930-s. 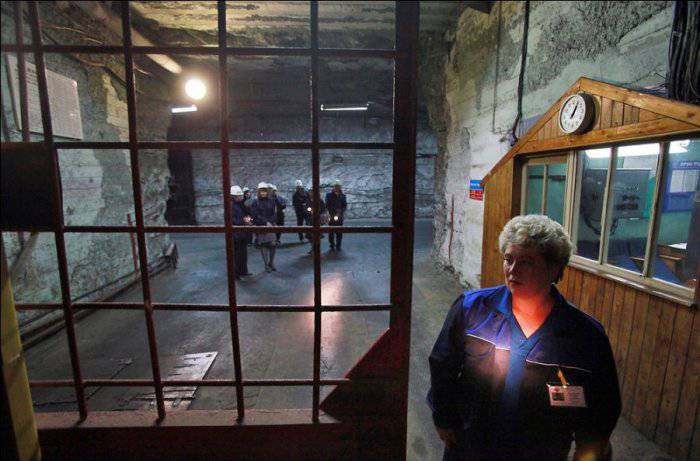 During the restructuring period, the reserves of the state reserve in terms of food products decreased significantly: sugar by 4,5 times, vegetable oil by 3 times, meat products by 2,5 times.

Nevertheless, the system of state reserves made a huge contribution to the preservation of social and political stability in unfavorable turning point 1990s, when up to 50% of the monthly consumption of food products in some regions, mainly subsidized, was supplied from the state reserve.

Rosgosrezerv is in constant readiness to fulfill its main purpose, carrying out various measures to optimize the volume of accumulation and nomenclature, to maintain the quality indicators of various material values ​​held in storage, their constant updating and replacement.

One of the core tasks of the Rosgosrezerv is supplying the necessary equipment, materials and components for the liquidation of the consequences of large-scale emergencies. When liquidating the large-scale consequences of the accident in 2009 at the Sayano-Shushenskaya hydroelectric power station, the Russian State Reserve, together with the Ministry of Emergencies, took literally six hours to transfer all the necessary electric generators and materials to the disaster site. During forest fires in 2010, Rosgosrezerv shipped the necessary equipment and fuel to ensure the smooth operation of the fire aviation Ministry of Emergencies of the Russian Federation. During the tragedy at the Chernobyl nuclear power plant in 1986, materials for eliminating the consequences of the accident, including several thousand tons of lead for the construction of a protective sarcophagus above the fourth power unit, were allocated from the storage facilities of special storage facilities of the state reserve system.

Special reserves of the state reserve are located throughout the Russian Federation. Territorial representations of Rosgosrezerv are in each separate federal district. The structure of the Russian State Reserve includes the Main Information and Computing Center, the Research Institute for Storage Problems, and the Torzhok Polytechnic College.

One of the combines of Rosgosreserva is located a few hundred kilometers from the capital. Automated checkpoint, ramified driveways, concrete fence, paramilitary security - everything is as it should be in warehouses. And only a wooden guard tower with a metal red star on the top gives out in a usual warehouse a modest enterprise.

Entry to the storage facilities is carried out only through the elevator, which, like the miners, is called a cage. Somehow, the storage is like a subway station, but on the walls of the chambers where the main products are stored, rock layers are clearly visible, which indicates that the structure is preserved. Inside the storage there is neither mobile nor radio communication, but at the same time all devices are installed that allow the storage to exist autonomously for a long period, including when exposed to nuclear or chemical weapons. Powerful doors with a body thickness of more than half a meter, connecting various “compartments” of the vault, resemble gates in the patterns of rocket shafts.

Storage technology of all available material values ​​in Rosgosrezerv improved every year. The modernization of refrigeration complexes. A lot of attention in Rosgosrezerv paid to the use of modern developments in the field of packaging and packaging, which contributes to an increase in shelf life. For example, just due to bagging with a special polymer completely safe liner, the shelf life of sugar will increase from 4 to 12 years. 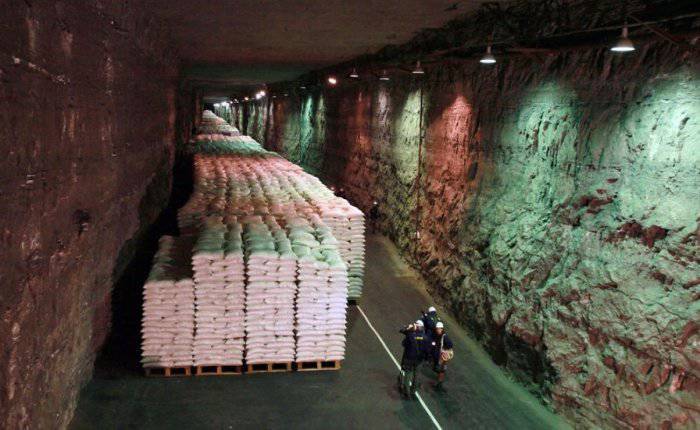 Special stores have a high level of protection from external influences. The protection of the territory consists of several lines, which, together with video surveillance and the use of the latest electronic tracking systems, completely exclude the possibility of unauthorized entry to the territory of important objects. Armed departmental guards of all Rosgosrezerv combines also provide fire protection. Over the past 25 years at the facilities of Rosgosrezerv there were not even the smallest losses due to the occurrence of fires. Protection of objects of special importance that are included in the system of state material reserve is carried out by special units of the Internal Troops of the Ministry of Internal Affairs of Russia.

The material complex of the state reserve of the Russian Federation includes the storage of products, foodstuffs, raw materials of several thousand items: from grain, drugs, canned food to machinery, fuel and lubricants, power plants, electric generators and much more. The basic principles of the Rosgosreserva: efficiency, reliability, availability.

The domestic supplier of material values ​​is a priority here. Storage of imported goods is made only if Russian manufacturers either do not produce them, or produce in insufficient, limited quantities. As part of the implementation of the State Food Security Doctrine, the Rosgosrezerv introduces long-term contracts with domestic producers, which is one of the main incentives for the constant re-equipment of production facilities.

Before entering the plant, all products undergo several stages of rigorous quality control: prior to the conclusion of a contract, an examination of the quality and safety of food and industrial goods, an analysis of the state of production of probable suppliers, strict input control over the transfer of products. Only in the last few years, the Rosgosrezerv Research Institute for Storage Problems has conducted a comprehensive analysis of 23 enterprises of the food industry only. Of this amount, the products of five enterprises did not meet the requirements for durable goods, and they were not allowed to be placed in the state reserve.

In order to discuss the prospects for the future development of legislation in the sphere of the state’s material reserve, an on-site meeting of the Committee on Defense and Security at the Council of Federations under the leadership of Viktor Ozerov was held at one of the largest combines of the Rosgosrezerv.

Seven years ago, members of the committee already visited the plant when a scientific-practical conference was held at its base, the main issue of which was to discuss issues of regulatory regulation and ensure the uninterrupted functioning of the state reserve. The result of that work was the adoption in December 2010 of several amendments to the Federal Law of the Russian Federation “On State Material Reserve”.

In order to obtain first-hand information on how amendments to the basic law adopted at the end of last year are being introduced, in May 2011, the senators deliberately came to one of the largest combines of the Rosgosrezerv. In addition, according to the statement of the Chairman of the Committee on Defense and Security at the Council of Federations, Viktor Ozerov, the real possibility of using state material reserves to exert a regulatory influence on the market in the form of significant commodity interventions was considered. Such an opportunity is provided for in the Law “On State Material Reserve”, but it is necessary to adopt a regulatory act at the level of the Government of the Russian Federation, which will determine its order.

What awaits Rosgosrezerv after the May visit of senators? Without a doubt, it can be argued that the jubilee year for such an important department will be truly a year of effective dialogue at the level of legislative authorities, which will ensure even more stable and, above all, high-quality work for many years.

We often remember the gold and currency reserves of our country, sometimes forgetting that in the most difficult times, during the full-scale mobilization of the state, emergency situations, people do not need gold and diamonds, but simple and most necessary medicines, food, fuel, that is, everything something that will help survive. It Rosgosrezerv and is engaged in their acquisition, storage and delivery. That is how he is directly involved in ensuring and strengthening the national security of the Russian Federation. The role of the state reserve in the conditions of modern economic development has not only not diminished, but, on the contrary, has increased many times. Rosgosrezerv has completely new tasks of providing support at the state level to economic entities in order to prevent destabilization in the event of a huge imbalance in the domestic commodity-material market and to exert a regulatory influence on the market.

We are in Yandex Zen
Universal fighter engineering troops. Part two
An-12 in Afghanistan
5 comments
Information
Dear reader, to leave comments on the publication, you must to register.