In the Russian army will cancel berets

16 2011 June
16
Russian military uniforms may again undergo changes. In the service of the rear of the Armed Forces of Russia they say that berets can be canceled. And the troops will again return to the wearing of caps and caps. 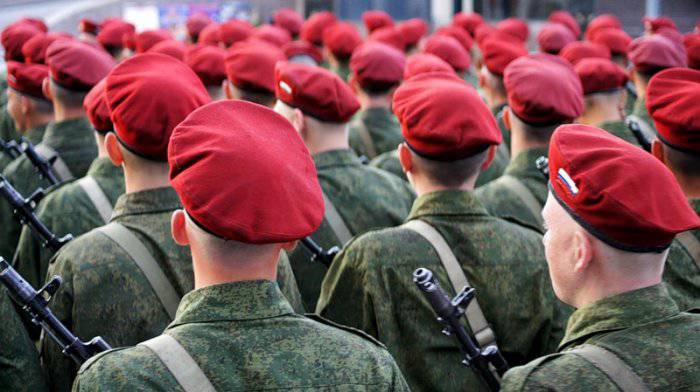 “Our new form (it is called“ digital ”in the troops) was, as you know, constructed on the model of the NATO form. During the last Victory Parade, the first persons of the country allegedly "expressed bewilderment" that the troops were walking in berets and in field uniform, and not in a parade with caps. The military leaders, sensitive to new trends, gave the team to work out a return to the cap for the field uniform, ”the logistics officer of the Russian army told AN.
Recall that after this parade, many famous people, including film director Nikita Mikhalkov, expressed discontent with the facelessness of the military masses.

Meanwhile, the US Army also plans to replace berets with caps. This decision is due to the impracticality of berets in the field. They do not have visors, and they do not protect the eyes from the sun. In addition, poorly absorb sweat.

Cancellation of berets applies only to field uniforms of US Army personnel. The beret will still remain an integral part of the daily form in the land forces of the country. In addition, the order to go to the cap does not apply to elite rangers and other special forces of the US Army, where berets have traditionally been considered a distinctive form of clothing.

The US Army is going to abandon the black wool berets, which are part of the field uniforms. The reason, according to the military, was the frequent complaints of soldiers who claim that berets are rather impractical, reports BBC.

"That was 10 years ago and they had to be abandoned! I hate wearing a wet sock on my head. Besides, my skin is stretched because of him," Officer Mark Vino from the Lewis military base told Army Army publication McCord, located in Washington State.

The soldiers complained about the berets because, firstly, the beret must be worn with both hands. Secondly, the beret was made too hard - it was impossible to cram it into a pocket. And thirdly, it takes, unlike a kepi, did not provide either adequate protection from the sun or airing the head.

Representatives of the Pentagon said that the berets will be replaced by caps, which will form part of the field uniform. These changes will affect approximately a million military personnel. Replacing berets on caps turned out to be practical also because caps cost almost half the price they take.

The berets will remain only in those parts of the American army, with the form of which they are strongly associated and for which they serve as one of the characteristic distinguishing features, namely, in special forces, in the marine corps and among the rangers.

While the American army has already gained experience with the mass use of berets and is now refusing such headgear, the command of the Russian Armed Forces has decided that there are not enough berets for Russian soldiers. In February 2011 of the year, it was announced that the berets would eventually replace the traditional Russian caps - as they wear out.

"Currently, the issue of introducing a beret is being worked out for all categories of military personnel (except for the Navy), which is to be worn with everyday and field uniforms, for the Airborne Forces and the Air Force - blue, for the combat units of the coastal forces of the Navy - for black, for the Ground Forces and other arms troops - defensive, "- said the representative of the Defense Ministry captain Vladimir Drobyshevsky.

According to him, these changes will expand the range of headdresses of military personnel when they are equipped in different climatic conditions, depending on the type of activity and the nature of service. The definition of a specific form of clothing with regard to the tasks performed is entrusted to the commander of the military unit.

We are in Yandex Zen
The action “Military service under the contract is your choice!” In Rostov-on-Don: future contract servicemen, exhibitions and “Russian Knights”
16 comments
Information
Dear reader, to leave comments on the publication, you must to register.