70 years ago the Germans first used the V-1 projectile

12 2014 June
55
The German development of an aircraft-projectile (cruise missile) "V-1" was the first such unmanned aerial vehicle, which was used during the Second World War. V-1, also known under the designations V-1, A-2, Fi-103, was in service with the German army in the final part of the war. The name of this rocket comes from the German word Vergeltungswaffe (weapon retaliation). A projectile with a warhead weighing up to a ton could hit targets at a distance of up to 250 km, and the latest missiles - up to 400 km.


The project of this weapon was a joint development of German designers Fritz Gosslau (company Argus Motoren) and Robert Lusser (employee of the company Fieseler). In July 1941, the fruit of their joint work, which received the Fi-103 code, was approved by the German Ministry aviationheaded in those years by the Führer's closest associate (Nazi No. 2, as he was often called) Reich Marshal Aviation German Goering. The industrial production of the V-1 projectile was launched at the end of 1942.

The launch of the rocket was launched on the island of Usedom, located opposite the mouth of the Oder River in the Baltic Sea. During the Second World War, the “Usedom” concentration camp was located on this island. The prisoners held in this camp were used by the Germans in factories that produced Fau-1 projectiles. At the same time, the production of “miracle weapons” in the form of V-1 and V-2 missiles was delayed for several months due to the fact that 17-18 of August 1943 of the year British aircraft conducted a large-scale air operation against objects located on the island. 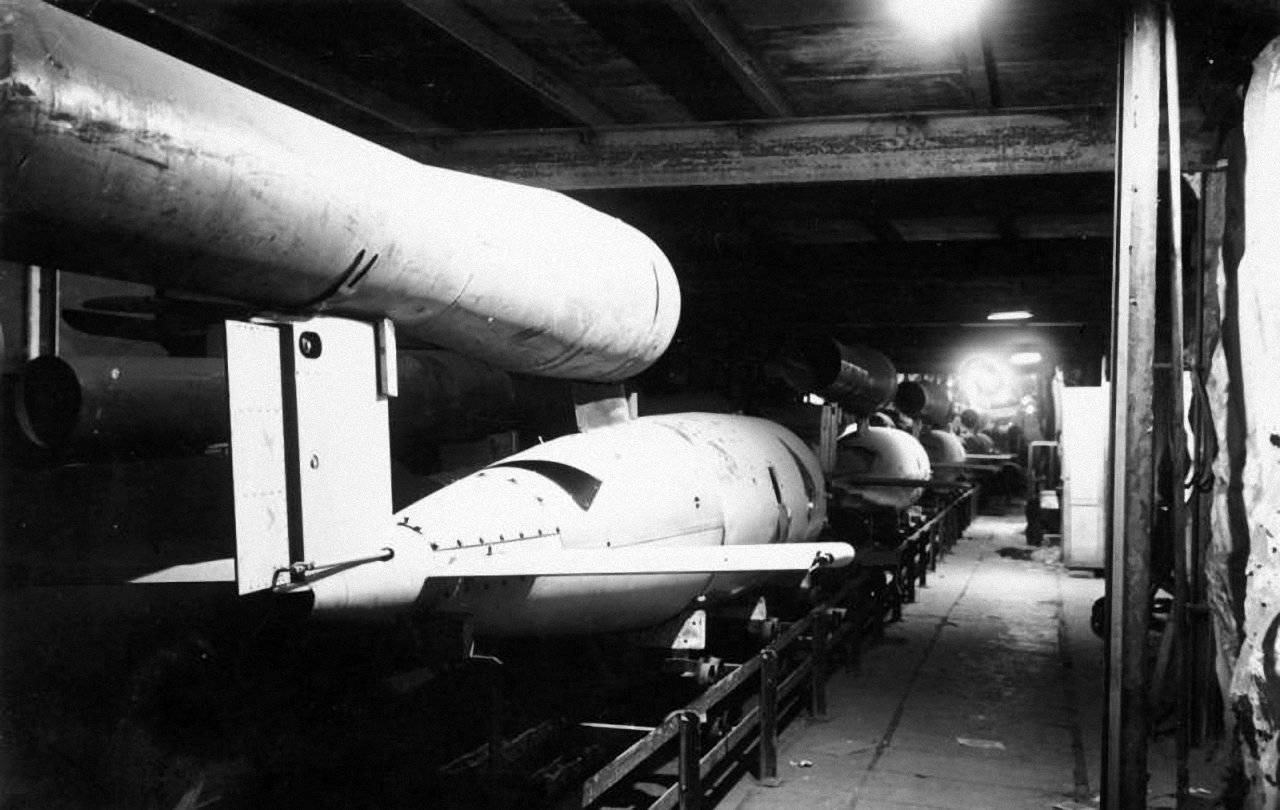 The bombing of the island became possible after the intelligence of the Army of the krayovoi (AK) conducted one of its most successful operations. The Poles were able to develop a German research center in Peenemünde, where they assembled Fau-1 projectiles and V-2 missiles. The first information about this strategic object appeared in AK in the autumn of 1942 of the year, and in March of 1943 of the year a detailed report was sent to England, which allowed the British to organize an air operation against the island.

For the first time, the Fau-1 13 was massively used on June 1944 of the year against Great Britain, exactly one week after the Allied forces landed on the beaches of Normandy, opening the Second Front in Europe. On that day, an air strike was struck at London. Later, the Germans began to use projectiles to bombard the cities of Belgium and Holland that had been liberated by Anglo-American troops. In addition, several V-1s were fired around the capital of France, from where German troops were knocked out by the Resistance forces even before they reached the base of a part of the Allied forces.

In all, during the war years, the German military industry managed to assemble about 30 thousands of V-1 airplanes. By 29 March 1945, about 10 thousands of them were used for shelling the UK. However, only 3200 missiles were able to reach the British Isles. The 2419 missiles struck the English capital, the losses from their use amounted to 6184 killed and 17 981 wounded. At the same time, about 20% of missiles failed at the start, 42% managed to shoot down anti-aircraft artillery and British aircraft, and 7% broke up into pieces, colliding with aerostats of an air barrier. 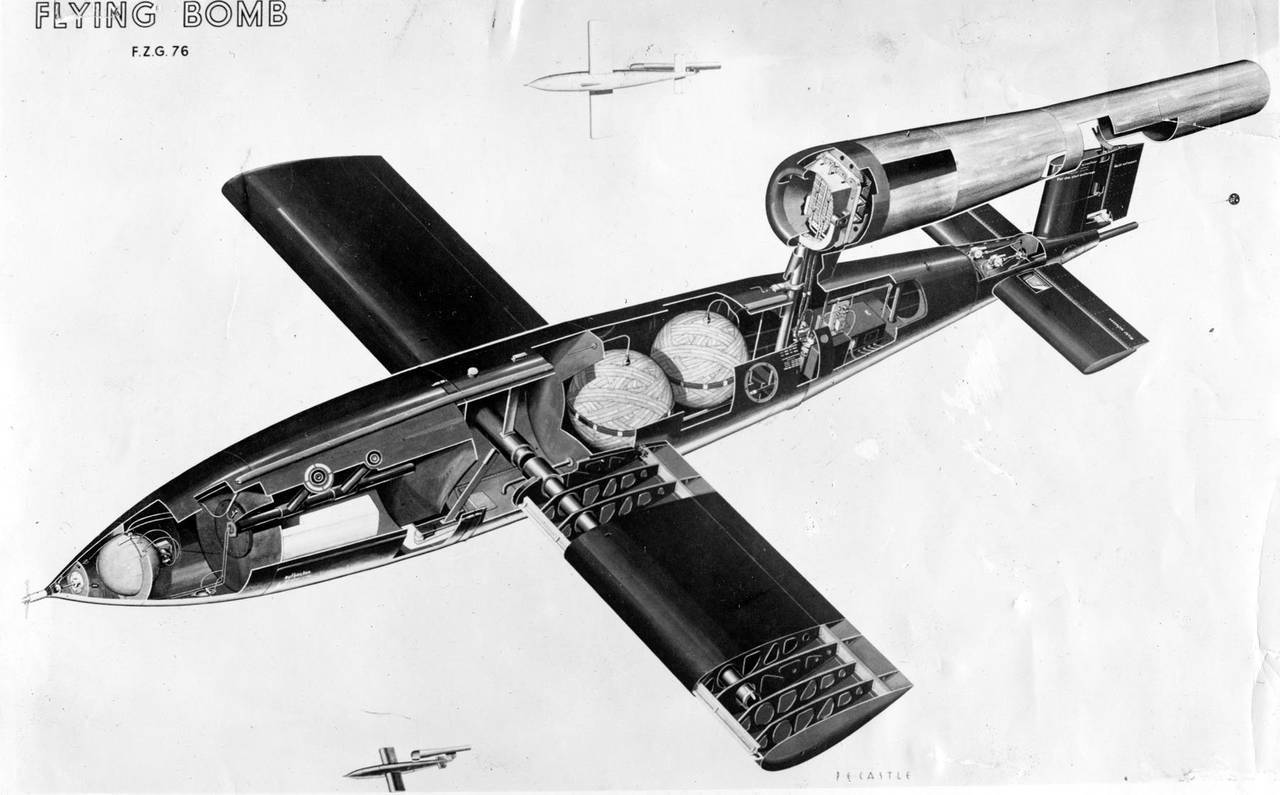 Use of Fau-1 Projectiles

The main targets for the German Fau-1 projectiles were the big cities London and Manchester, and later their targets became Antwerp, Liege, Brussels and even Paris.

In the evening of 12 June, 1944 German long-range artillery, which was located in the Calais region in northern France, conducted an unusually heavy shelling of the British Isles. This shelling was conducted with a diversionary purpose. At 4 in the morning of June 13, the shelling came to an end, and after some time, British observers stationed in Kent noticed a kind of “airplane” that made uncharacteristic sounds, and a bright glow was noted in its tail. The observed apparatus continued its flight over the Downs, after which it swooped down and exploded near Gravesend in Swanskoum. It was the fall of the first VW 1 rocket that exploded on the territory of the British Isles. Over the next hour, more 3-like missiles fell at Cacfield, Bethnal Green and Platte. Then the Germans began daily systematic raids on English cities using V-1 projectiles. Residents of the British capital nicknamed them "flying bombs", as well as "buzzing bombs" - for their characteristic loud sound of engines.

After the first raids, the British urgently began to develop a plan for the defense of cities against new German weapons. According to their plan, it was necessary to build a defense line 3: air defense fighters, anti-aircraft artillery and aerial barrage balloons. To detect the V-1, it was decided to use the already deployed network of observation posts and radar stations. At the same time, the British placed the barrage balloons right behind the line of anti-aircraft guns, in the number of 500 pieces. The number of anti-aircraft artillery was urgently increased. 28 June 1944 of the year 1 light and 522 heavy anti-aircraft guns were used to repel the V-363 air attack on London.

Soon, to repel raids, the British began to use self-propelled anti-aircraft installations and only rocket launchers began to appear, and the number of balloons was also doubled. Moreover, the royal navy sent ships to the French coast that were to detect missile launches. These ships were located in 7 miles from the French coast with an interval between ships in 3 miles. Not far from the ships, English fighters were on duty. When an air target was detected, the ships gave a signal to fighters using lighting or signal flares. At the same time, the task to shoot down the projectile was not the easiest because of its relatively high flight speed. The fighter pilot had no more than 5 minutes to shoot down the V-1. During this time, the German projectile passed from the French coast to the zone of action of the British anti-aircraft artillery, and after another minute it hit the zone of the location of the airborne balloons.

In order to achieve the most effective defense against German missile shells, the British military moved anti-aircraft artillery from their cities directly to the coast. August 28 1944 of the year was a turning point for the new German wonder weapon. Of the 97 Fau-1 projectiles that crossed the English Channel, the British were able to shoot down 92 units, only 5 missiles reached London. The last V-1 rocket fell in England only in March of the 1945 year, shortly before the complete surrender of Nazi Germany.

At the same time, the German V-1 missiles managed to cause great damage to the UK. The 24 491 building was destroyed by rockets, and the 52 293 buildings were damaged to such an extent that they became uninhabitable. Civilian casualties amounted to 5 864 people killed, even 17 197 people were seriously injured, 23 174 people got off light injuries. On average, for every V-1 that was able to reach the English capital or its environs, there were about 10 killed and seriously wounded British. In addition to London, Manchester, Portsmouth, Southampton and several other cities were bombarded with V-1 rockets. Despite the fact that only half of all missiles reached their intended goal, these attacks had a great moral and psychological effect on the population of the British Isles. 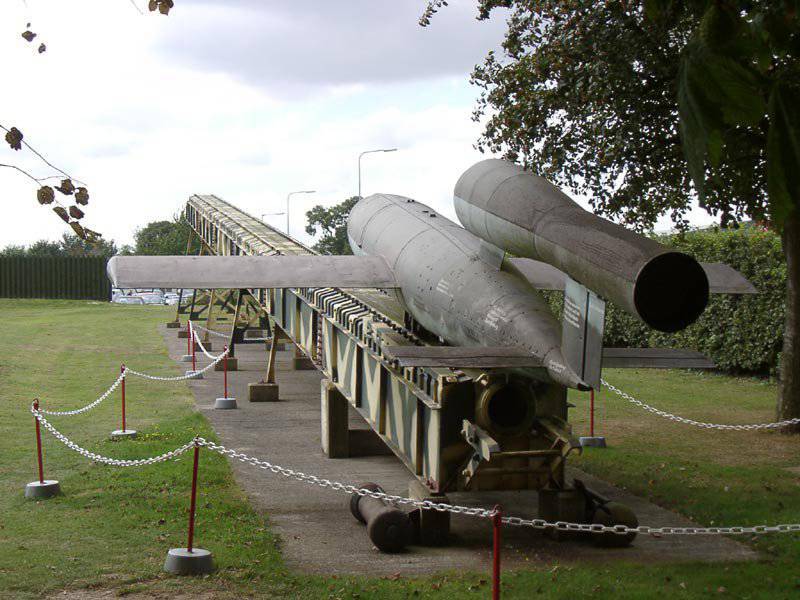 After the Allies landed in France and quickly pushed the Western Front deep into the mainland, freeing France and Holland, the Germans redirected their attacks on Liege and Antwerp. At the same time, the Fau-1 launchers themselves were initially located on the northern coast of France and in the territory of Holland.

Since the Fau-1 projectiles failed to hit point targets, as well as medium-sized objects, including factories or British naval bases, at the end of 1944, it was decided to work on the manned V-1 version. Also, such missiles could be used against Allied ships in British ports. New development received the designation "Reichenberg." The cockpit was located in the middle part of the rocket, the Germans were going to use the Condor and Non-200 bombers as carriers of such missiles. After the rocket was separated from the carrier aircraft, the pilot carried out its piloting. Having found the necessary target, he directed the V-111 to it, then, dropping the cockpit cap, ejected.

Naturally, the pilots had little chance of surviving, and in the case of a successful ejection, the pilot was almost guaranteed to be captured. Despite this, the Germans quite easily managed to recruit the 250 first volunteers, among whom was the famous German female pilot Hannah Reich. She even managed to successfully test the manned version of the V-1. In total, until the end of the war, the Germans created 175 manned versions of the Fow-1, but none of them were used in battle. 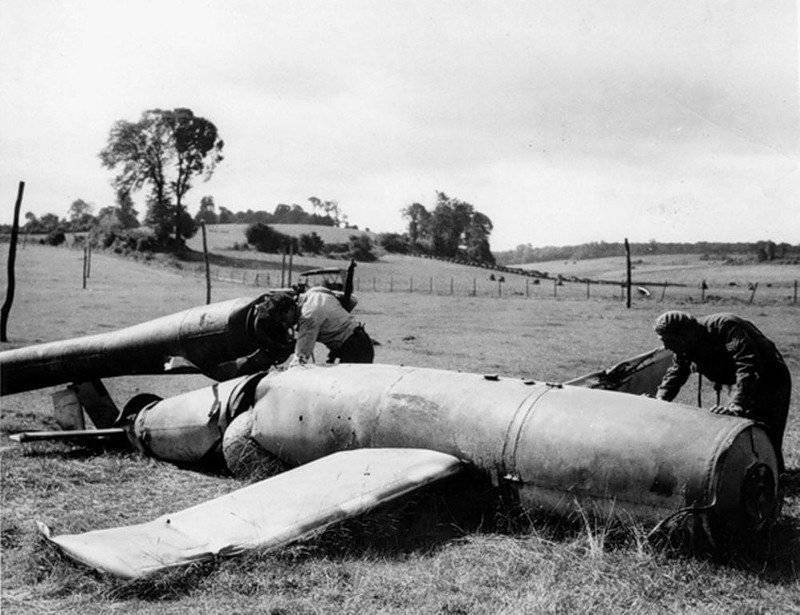 Ctrl Enter
Noticed oshЫbku Highlight text and press. Ctrl + Enter
We are
The right shell for the right goal.Advanced MRM tank ammunition for firing out of line of sight
Military Reviewin Yandex News
Military Reviewin Google News
55 comments
Information
Dear reader, to leave comments on the publication, you must to register.