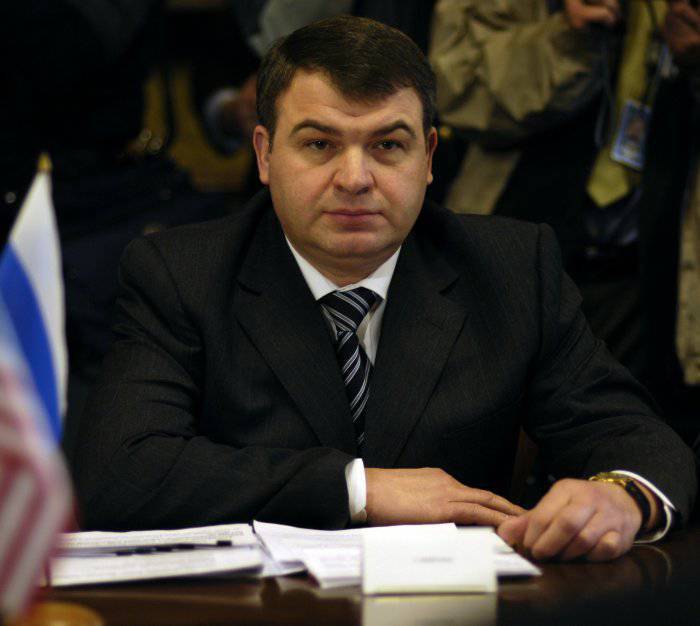 Defense Minister Anatoly Serdyukov privately reported to the State Duma on the progress of army reform. The deputies present at the meeting told what the head of the military department was thinking about the causes of the recent bombings at military depots and how he responded to calls for resignation.

After the speech, the minister told reporters that the Russian army does not plan to purchase Tanks neither domestic nor foreign production. Moreover, Russia is not going to introduce NATO standards for military equipment and weapons. We don’t buy Leopards, just like ours (we were talking about tanks - approx. LOOK), ”the minister said, noting that they“ do not meet ”the requirements of the military department.

Answering questions about the means by which the Russian army will conduct military operations in the event of war, given that the Defense Ministry does not buy new tanks, Serdyukov said: “With what we have available.” Recall that Russia’s plans to purchase Mistral-type helicopter carriers from a NATO member country of France have raised speculations that the Russian Armed Forces may switch to NATO standards in the future.

Konstantin Makienko, an expert at the Center for the Analysis of Strategies and Technologies, explained to the VIEW newspaper that in this case the minister meant the sufficiency of the potential of the Russian troops precisely to contain internal conflicts in the country.

“Conflicts can be of different types. This is not necessarily aggression against Russia. Separatist rebellions or local conflicts like the war with Georgia in 2008 are most likely. To contain such conflicts, the military-technical equipment of the Russian Armed Forces is quite satisfactory. ”

Commenting on the refusal of the Russian army to switch to the so-called NATO standards, the expert stressed that there is no such thing. “This concept is replicated in the press, but there are no specific requirements behind it. Nevertheless, the imitation and copying of the weapons strategy adopted by NATO is unprofitable for Russia for political reasons. The purchase of Mistral does not indicate such a transition, ”he believes.

"The case is not hopeless"

“Serdyukov said that the military-industrial complex is still experiencing great difficulties. MIC enterprises are trying to correct the existing situation both in terms of engineering design, and in terms of technical performance. They work on the bugs, but the gap is still too great. However, I think this is not a hopeless matter, people are working, ”he said.

# {weapon} Viktor Zavarzin, chairman of the State Duma’s defense committee, also said that the minister focused on the implementation of the state defense order.

“We understand that the leading countries of the world are now replacing the concept of a mass army for preparing for the conduct of the so-called network-centric wars, which means a fundamentally new quality of warfare,” Zavarzin said. That is why, the deputy explained, it was decided to transfer the Armed Forces to the new content of the service, for which the armament program was adopted before the 2020 year.

“For“ future wars, ”a qualitatively new weapon is needed, ensuring constant superiority and preemption of the enemy in delivering high-precision strikes. And this, of course, sets fundamentally new tasks for the defense industrial complex, ”said the deputy. In this regard, in his opinion, it is necessary to toughen the requirements for the defense industry for the serial purchase of modern types of weapons and military equipment, reports "Interfax".

In continuation of this topic, Chief of the General Staff Nikolai Makarov said that the newest center of combat training of military personnel, which Russia buys in Germany, should pay off in two or three years. “This will happen due to the fact that the troops will be less exploitative of military equipment, waste motor resources, fuel and ammunition,” he said.

“This is a huge training base with modern software that allows you to operate with any kind of actions in each simulator and in the group of simulators as a whole. This will help train military personnel in more modern ways of warfare, ”Makarov added, recalling that the agreement to start designing a combat training center was signed in early February. The cost of the simulator is not called. The object may appear on the basis of the Mulino landfill in the Nizhny Novgorod region already in 2012.

According to the deputy chairman of the Duma Defense Committee, Igor Barinov, they also decided at the meeting to adopt bills by the end of the month on granting a deferment from conscription to schoolchildren, graduate students, and students of secondary technical schools.

“There will be three separate bills. The first is for schoolchildren. Until October 1 everyone will be given a deferment, everyone will have the opportunity to enroll. The second bill will settle the roughness in granting deferments to graduate students, and the third will resolve the issue of delays for students at secondary specialized educational institutions, ”he said.

“Isn't it easier to resign?”

A hot topic of the meeting was the recent explosions of weapons arsenals in Bashkiria and Udmurtia. According to Barinov, the cause of the recent explosions at military arsenals in Bashkiria and Udmurtia was inadequate storage and the human factor. “Almost all the deputies spoke about the warehouses. Serdyukov replied that these were remnants of the Soviet era, ”the parliamentarian informed.

Referring to the incident in Udmurtia, Barinov noted that all the ammunition that was on the 102 arsenal of the Main Missile-Artillery Directorate of the Ministry of Defense got there at the beginning of the 90 of the last century after the abolition of the Warsaw Pact. They were exported from Germany and Hungary.

“All this was stored in an open way, in the field. Therefore, there are questions about whether any indicators, such as pressure or temperature, were measured there at all. However, this problem is not only Udmurtia. There are so many ammunition in warehouses that we have to destroy for decades, ”Barinov said.

Commenting on the reports of some media that these emergencies were allegedly organized in order to hide the facts of the theft, Barinov expressed doubts about the authenticity of such a version.

"That is unlikely. This was true in the 90s, perhaps in the early 2000s. Then the warehouses were burning, and then samples of weapons that seemed to have been destroyed by fire, we found in the militants in the North Caucasus, ”the deputy, who once headed the regional division of the Alpha group, reminded.

Barinov also gave explanations to Serdyukov that “there are too many such warehouses, the sapper units were being prepared for disposal, but, as always, not everything has been brought to fruition in the form in which it is planned, therefore conscripts are involved in military service” .

In their turn, Communist deputies suggested that the head of the Ministry of Defense should think about his resignation in this connection.

Recall that in recent weeks in Russia, two major incidents happened at once in arsenals: first a fire and explosions at a military base in Bashkiria, and then a fire and, again, explosions of ammunition at the Udmurt warehouse. As a result of the incident, civilians were injured, there are victims.

“For all the previous closed meetings, I have never heard, and no one will confirm to me that we are discussing something secret here,” he argued. “What will he tell us? What is the "Mistral" is not supplied in full set? This is not a secret, ”said the deputy.

“The fact that the training of officers is ruined is also not a secret,” he continued. “The fact that retired servicemen do not receive housing is not a secret either.” In this context, Reshulsky proposed to “remove the security stamp” from this part of the plenary session.

His colleague Valentin Romanov also demanded that Serdyukov give a clear open explanation of why Russia is spending 1,2 billion euros to buy two Mistrals without electronic equipment.

The vice-speaker from the LDPR, Vladimir Zhirinovsky, gave a sharp remarks to these speakers. "We, too, all 40 people can speak, demand to open the" government hour "and spend a minute on the rationale," he assured.

“Half a day we will demand openness of the meeting? If there is one proposal from the faction, there should be no more, ”the deputy stressed. In his opinion, there must necessarily be a closed regime, especially in the conditions of aggravation of the international situation. ”

Summing up the discussion, the speaker Boris Gryzlov recalled that the Council of the Duma decided that "the mode of operation will be closed." After he put this issue to a vote, 317 was against the idea of ​​preserving the previously approved format of work, 90 expressed itself.

Recall the practice of holding closed "government hours" with the participation of the head of the defense department appeared with the appointment of Serdyukov to this post in February 2007 of the year. The previous head of the Ministry of Defense, Sergei Ivanov, answered the questions of the deputies in a mode open to the press.

We are in Yandex Zen
Oleg Valetsky about the wars in the Balkans, their causes and Russian volunteers
Anatoly Serdyukov - "not a man, this is a function"
22 comments
Information
Dear reader, to leave comments on the publication, you must to register.