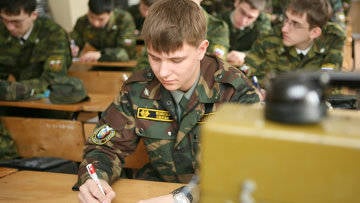 After a two-year break, the military universities of the Ministry of Defense are again starting to recruit applicants for higher education.


"The recruitment of applicants with subsequent entrance exams will be carried out in June, in the Western Military District, it will be held at 20 universities of the Russian Defense Ministry. In total, it is planned to enroll cadets first-year students in military universities of ZVO," the representative of the West told ITAR-TASS today Military District Lieutenant Colonel Andrei Bobrun.

In 2009, the Ministry of Defense introduced a moratorium on the recruitment of cadets: the number of graduates of military universities exceeded the vacant officer positions in the Armed Forces in 4 times. At the same time, the ministry reformed universities, which was associated with their enlargement or reduction. The Defense Ministry currently has 15 military academies, 3 military institutes, 15 military universities and 17 military schools. They prepare students and cadets in 300 specialties.

We are in Yandex Zen
November 13 - Day of the troops RCBZ Russia
Today is Day of troops RCBZ
4 comments
Information
Dear reader, to leave comments on the publication, you must to register.