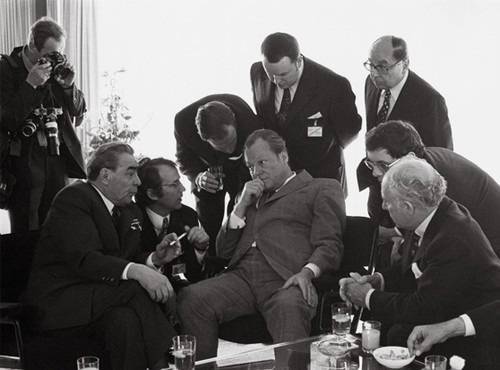 Many residents of the former USSR still probably remember how West Germany was called the stronghold of world imperialism, neo-fascism, revanchism. But at the same time, few people know, and almost no one knows that the two irreconcilable enemies - Leonid Brezhnev and the German Chancellor Willy Brandt - were tied by a multi-year secret male friendship. This friendship was so strong that once, when the German Chancellor was involved in a sex scandal and because of his connection with an outsider, they were even going to dismiss him, it was Brezhnev who secretly sent his friend a million marks to bribe Bundestag deputies to vote correctly.


In the middle of the 70s, Leonid Brezhnev, despite his enormous political potential, was in a bit of a hover. He was forced to share power with Kosygin, popular among ordinary people, who was formally considered the head of state. No less dangerous for Brezhnev came from the devoted Stalinist Suslova, who could strike at the back at any moment. In order to defend his position in the political bureau and get out of dependence on some of its members, Brezhnev just needed to hold an international action, for example, it would be nice to sign some document that will forever be included in history. A good solution would be the signing of a peace treaty with an implacable ideological rival - Germany.

Brezhnev was well aware that this was an extremely difficult task, but with her decision he would ensure political integrity for a long time. As a first step, Brezhnev gave the order to the only person whom he fully trusted Minister Gromyko, according to which he was to speak at a political bureau meeting with a speech about the need for rapprochement with West Germany.

The preparation of the document was entrusted to the head of the 3 department of the USSR Foreign Ministry, Valentin Falin. Brezhnev received unexpected support from the head of the KGB, Andropov, who was well aware that this was also his chance to establish himself on the political and party olympus. Andropov decided on a non-standard step, he called one of the most trusted security officers and ordered to establish personal contact with the German Chancellor Willy Brandt himself. It was really a non-standard step. Valery Lednev, an international journalist, was chosen as the person who was supposed to establish personal contact. It was he who was assigned the main role in the game, started by the Soviet leader. Lednev perfectly understood that not only the future of Europe, but also the whole world depended on his actions.

The Soviet journalist, correspondent of the newspaper Izvestia, Valery Lednev, was entrusted to the office of a major political official, and most importantly the chancellor’s personal friend, Egon Bar. An experienced politician, Bar immediately realized that a document quoted by a journalist, the main text of which can be known only to the heads of the Federal Republic of Germany and the USSR, is extremely important, and the fact that Brezhnev seeks to meet, bypassing diplomatic channels, only shows a huge political revolution in European politics in the near future. The bar arranged a meeting between Lednev and Willy Brandt, and the journalist personally presented the text and verbally told all that the representative of Andropov had asked him.

After the first minute of conversation, Brandt realized that everything that the journalist was talking about was not a political provocation and that all this could not be a setup. Three weeks later, State Secretary of the Government of West Germany Egon Bar flew to Moscow for a scheduled meeting with the head of the USSR Foreign Ministry Gromyko. Upon arrival at the Moscow airport, the German official felt himself a participant in a detective game. Right at the airport, an unknown person stuck a crumpled piece of paper into his hand, on which a request was made not to leave the hotel room at a certain time. In the crowd, Bar met Lednev, but he pretended not to be acquainted with the distinguished German guest.

At this time, Brezhnev and Brandt directly discuss all aspects related to the political situation in Europe and the world. They prepare the ground for the signing of a historical document, which was supposed to turn the whole idea of ​​the political position of the old woman of Europe. Brezhnev and Brandt trusted each other endlessly, but it was carefully hidden, since they would not have been approved by either in Germany or in the USSR. In general, it is necessary to recognize that some members of the Politbureau were beginning to be irritated by the excessive activity of the new Secretary General in the international arena.

The cold winds of recent coups, conspiracies and revelations were still walking along the corridors of the Kremlin. Brezhnev was well aware that his political opponent Suslova was even ready with the wording “Non-class approach in international relations,” that would be what Brezhnev’s attempts to improve relations with West Germany would have called.

However, the German chancellor was at greater risk. In the Bundestag, there were practically no supporters of establishing relations with the USSR, and any careless action by Brandt would lead to immediate resignation. But it must be admitted that Willy Brandt was one of the few politicians who put the public interest above his own convictions and views. Brandt was well aware that every day the high post could be the last. The life of the Chancellor was under the constant gaze of the tabloid press, one needed a sensation, the other a reason for the dismissal of an objectionable politician. 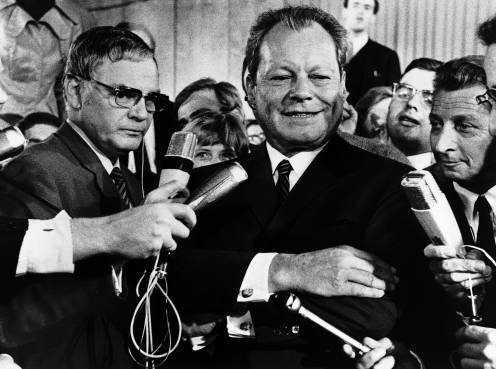 Willy Brandt and his wife publicly demonstrated the strength of family ties, but evil tongues argued that the Chancellor was cheating on his wife. A real hunt began after compromising the Chancellor, and as a result, the sensation came to pass - the opposition said that they had photos of an intimate plan. These pictures captured the chancellor with an unknown woman in a train compartment when he was returning from his election trip to Norway. Opposition representatives threatened to transfer these pictures to the tabloid press if Brandt did not personally resign.

Vyacheslav Kevorkov, who arrived from West Germany, told all the information about the events connected with Willy Brandt, Brezhnev. Having learned all the details of the case, Brezhnev was perplexed: "If I, because of every woman with whom I lived, would retire, I would not have to work when."

For Brezhnev, Brandt’s resignation was nothing more than a low blow; he placed too much hope on his Western friend. After all, it was with Brandt that Brezhnev managed to establish close and, moreover, warm relations, which made it possible to solve the most complex political issues in the world. A new person will have to start everything from scratch, and where is the guarantee that everything will go smoothly.

Brezhnev decided to help Willy Brandt avoid resignation. To this end, he invited Vyacheslav Kevorkov, who was well aware of the political background of West Germany and could tell a lot about it. Brezhnev was primarily interested in how the resignation procedure takes place, who makes the decision and how the situation can be changed. Kevorkov explained that everything happens in the Bundestag during the voting of the deputies of the parliament, as well as in passing noted that the votes of the deputies can be simply bought, that is, to pay them money and they will vote as needed. This was said casually, but that was what most interested Brezhnev. Bribing, here it is a real way out of a critical situation!

That same night Kevorkov flew to Germany. He had a case with a million marks in his hands, which should be the key to a positive vote for Willy Brandt MPs. But on arrival in Germany, Kevorkov never managed to transfer the money to the representatives of Willy Brandt, and all they could hope for was fate. The entire voting procedure in the Bundestag was shown by television, and Kevorkov, watching the TV screen in the hotel room, reported the results of the voting by telephone to Moscow. When in the end, with a margin of one vote, Willy Brandt won and stayed for two more years at the helm of West Germany, in Moscow everyone just shouted - Hooray!

Has this event become decisive in relation to the future of Europe? Maybe yes. Willy Brandt won the Nobel Prize for significant contributions to the development of relations between Western and Eastern Europe, and it is called the founder of the construction of a completely new Europe, such as we know it today. It is also necessary to recognize that warm and friendly relations between Brezhnev and Brandt continued until the death of the Soviet Secretary General, and, according to many political experts, it was this male friendship that guaranteed relative calm in Europe, despite all the machinations of the United States.