Russian weakness is the time of internal search 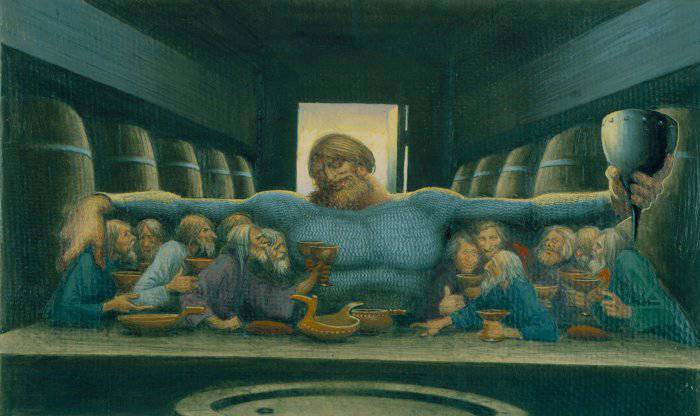 At present, Russia seems to many people in the state, and indeed to external observers, to be very weak. In many ways, this is true - this can be seen in the sphere of defense, economy, intellectual potential, morality, etc. But Russia has two peculiarities: Russia's apparent weakness will result in military defeat, if any enemy crosses our borders, there are no Russians, no It was and will not be equal in battle. And the second feature is the effect of the “Russian accordion”.

Any period of Russia's internal weakness is a time of internal search. The people in their unconscious are painfully looking for a new Big Idea, which they are ready to surrender with all the passion. The Red Project collapsed, the Red Empire, the Russian Federation did not give people any idea other than the idea of ​​enrichment. But this idea cannot become Russian, it is a temporary weakness. Russians are already bored, they need Accomplishments, Feats, Fights, overcoming themselves. By the way, this is one of the reasons for the Russians drowning and extinction, if there is no Idea worthy of the Russian people, it is going to get drunk from boredom, energy requires a way out.

Currently such a search is under way; when the Russians find the Idea, Russia will be transformed in the blink of an eye. During the search, all internal problems, illnesses of society, society break up, lose solidity, become loose: for example, we even have patriots split into a mass of hostile groups and groupings — some are Stalinists, some are Leninists, some are monarchists, some are Rodnovers, the fifth are nationalists, etc.

But, if the enemy dares to strike, he will be greatly struck, even yesterday's alcoholics, pacifists, greens, loafers, etc., will turn into Warriors, who will destroy any force. Genetics, the generic memory of millennia cannot be changed in a couple of decades. And at the beginning it may seem to the enemy that all the calculations are correct, the first Russian battles will lose, but the result will be the same - Russia will win the war.

This is evident in our stories: World War II, World War 1812, the invasion of the Swedish Charles XII, the apparent victory of the Poles and the Vatican in the Time of Troubles.

So now, in appearance, Russia is just a gift for the aggressor, so all sorts of Western, and Eastern analysts speak of a “sick man” named Russia, but this is only an appearance ...

The mystery of the "Russian accordion"

The peculiarity of the Russian civilization is the “effect of harmony”, after each act of the most severe aggression against Russia-Russia, our civilization not only destroys the invading forces of the enemy, but also expands its space, the space of the Russian world. Such a kind of globalization in Russian.

After the so-called. The “Mongol-Tatar” invasion of Russia-Russia has mastered vast areas from the Volga to the Pacific Ocean, Central Asia, in its sphere of influence included Mongolia and North China. After a series of brutal wars with Poland, she eventually entered the Russian Empire. Sweden’s aggression against us cost her the Baltic states and Finland. The aggression of the Ottoman Empire against Russia, the Russian Empire cost it the Crimea, the northern Black Sea coast and part of the southern, a number of territories of the Caucasus. The aggressiveness of Persia in relation to Russia led to the fact that we got a number of territories under its control in the Caucasus and northern Iran in its sphere of influence.

Russia is narrowing down, giving in to the territory under powerful aggression, but in the end, during the "expansion" it destroys the enemy, absorbing its territory or taking control. As the USSR after World War II controlled Eastern Europe, and East Germany was our true friend, if desired, it was possible to integrate it into the USSR, and now the enemy triumphant, managed to split White Russia, Little Russia and Kiev, Central Asia from Russia, The South Caucasus, the Baltics, lacks only the feasting Poles in the Kremlin. Russia seems weak, but this is only a defeat in battle, the war continues. And taking into account the power and the most severe aggressiveness of the Western world in relation to Russia-Russia, we can conclude that during the next expansion of the “Russian accordion”, huge territories will be under our control and in our sphere of influence - almost the entire northern hemisphere of the planet.

Ctrl Enter
Noticed oshЫbku Highlight text and press. Ctrl + Enter
We are
What you didn't want to know about EnglandOn the other side of the "red" and "white." Report Izborsk club
17 comments
Information
Dear reader, to leave comments on the publication, you must to register.