13 2011 June
21
The end of 1932 - the beginning of 1933 was one of the most difficult times for the USSR. The process of industrialization of the country went quickly with a booming pace. But for the industrial giants did not have time to simultaneously create the appropriate infrastructure, there were problems with the delivery of raw materials, marketing of products. For a number of construction projects, due to the redistribution of resources, there were not enough resources, because of the emergency mode, labor safety standards were violated, because of this, people became cripples. Working conditions were still very bad, because of the crowded living and the abominable living conditions in the barracks and shelters, diseases began. But, despite all the difficulties, the country was transformed just before our eyes.


In agriculture, things were worse. The peasants could not immediately rebuild their psychology of the willow collective farms to work as well as on themselves, plus the meager incomes of the collective farmers who did not stimulate an increase in productivity. In addition, the priority direction for the development of the national economy was heavy industry, therefore the proceeds from the sale of timber, grain, oil, etc. went there. 1932 was a bad year.

Map of the main areas of famine in the USSR. The thicker the hatching - the greater the size of the disaster 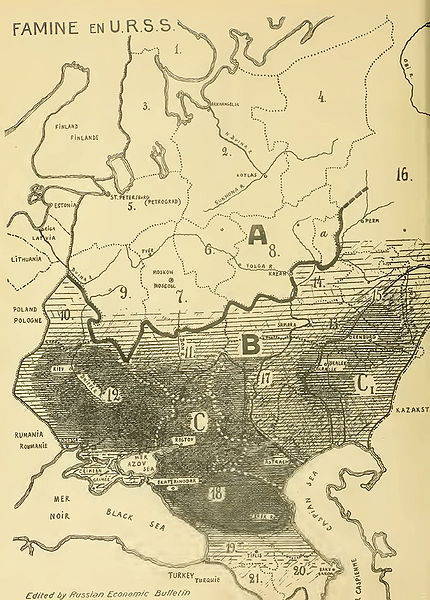 Before the “blow”, an information campaign was organized in the media: in the autumn of 1932, the journalist Stavsky from Pravda visited Kuban, and there he found a solid “counterrevolution” from the “hidden” remnants of the Cossacks, “whiteguards” who had “organized sabotage”. He was supported by the Rostov newspaper "Molot". They immediately responded to it, three special-purpose units were sent from Rostov, and the detachments were previously formed from “internationalists” (Latvians, Hungarians, Chinese. ”Yagoda and Kaganovich personally came from Moscow to lead the operation. And punitive detachments acted in the best traditions "Civil war: mass arrests and executions, including public, went. So 600 executed people in Tikhoretskaya - three days in a row on 200 people were taken to the square and shot. The executions took place in the villages of Kuban, in Stavropol, Kub At the same time, they organized a “purge” of the party’s ranks, excluded party members who “condoned saboteurs”, only in the North Caucasus region 45% of communists in rural areas, 26 thousand people were excluded. Some were sent into exile, property was confiscated. 4 November 1932 By the year, the North Caucasian Regional Committee adopted a resolution for disrupting grain deliveries to hold a number of punitive measures against a number of villages, from which all goods were taken out, shops were closed, and all debts were withdrawn in advance. As a result, these events spread to other areas of the Kuban and even to the Don.

Then the operation was repeated in Ukraine, where journalists also revealed the "kulak counterrevolution." 14 December 1932 was adopted by a joint decree of the Central Committee and the government "On grain procurements in Ukraine, the North Caucasus and in the Western Region", and the deadlines for completing the harvest were set by the Sami to be tight - by mid-January 1933. The Ukrainian authorities, headed by Postyshev, Kosior, and Chubar, introduced measures similar to the North Caucasus Territory. Trade was banned, general searches were carried out, food was taken, and everything was cleaned, money and valuables in the account of "debt." If they found hidden food, they imposed fines. If there was nothing, people were taken home, people were driven out in the winter. As a result, several villages in the Kuban rebelled, of course this was an excellent reason to further strengthen the repression.

So, was organized by the so-called. “Famine”, and it cannot be said that the plan was to deliberately destroy the population of Ukraine, also killed Russian and other nationalities of New Russia, Central Russia, the Volga region. And the people could not leave those regions where there was a famine, these areas were cordoned off by troops, special troops, so that people would not run away. Plus, the passport system was introduced in 1932, it made it difficult to move around the USSR, and the rural population did not have passports. The people accumulated in the cities, at the stations, but the markets were also closed there, the supply was only on the cards, but it was poorly organized. As a result, hunger became a terrible disaster, hundreds of thousands died, and special military teams detached themselves to bury the corpses. People ate cats, dogs, caught rats, ravens, carrion dug out of cattle burial grounds on the Don, there were cases of cannibalism. Ogpu fighters of the OGPU and the police killed on the spot, without trial. In some places, the plague began.

As a result, the situation sharply worsened, the supply of cities worsened, famine threatened to spread to other regions, circles of “Trotskyist” and “Bukharin” character were created, Diversion was powerful, the country could be blown up again - terror and famine could cause a new peasant war, a wave of chaos. This fact is confirmed by the correspondence of the writer Sholokhov and Stalin. Thanks to Sholokhov's data from Moscow, a commission headed by Shkiryatov was sent to the Don. It is clear that Stalin was not interested in disrupting the plans for industrialization, collectivization, the new war with the peasantry, this was necessary for the internal and external enemies of the USSR. In addition, Sholokhov, apparently, there were other "signals" about the organization of the "famine", so it quickly stopped. Stores opened, food appeared, that is, food was, even in the same areas where there was famine. However, the investigation of Shkiryatov and other investigators from the center did not reveal the perpetrators, the crime was hushed up, only “exaggeration” was reported.

Only a few years later, during the “Great Purge”, for a “famine,” a number of figures (including Berry) will answer, albeit according to other articles. And Sholokhov in Pravda would call the leaders who arranged this “enemies of the people” - for the fact that “under the pretext of fighting sabotage ... they deprived the collective farmers of bread”.

- The “Holodomor” was organized by “internal enemies” (the so-called “Trotskyists”) in order to stop the rise of the USSR, cause destabilization of power, undermine confidence in the supreme power, returning to the “swamp” of 20's. Eliminate Stalin and other "statesmen" from power.

- The people of the USSR were dealt a terrible blow; according to various estimates, 6-8 million people died.

- It is foolish to accuse Stalin personally of the “famine”, he was not a “cannibal”, he was not needed to destabilize the country, disrupt industrialization and other projects.

- It is stupid and disinterested to consider that the famine was organized for the purpose of the genocide of the Ukrainian people, the first blow was inflicted on the Kuban, the North Caucasus Territory, then the famine was organized in other regions, including Ukraine, the Volga region, the Central Black Earth region, the Urals, the Crimea, part of Western Siberia, Kazakhstan.

We are in Yandex Zen
Leaders of hunger
How did the peasants live in Tsarist Russia? Analytics and facts
21 comment
Information
Dear reader, to leave comments on the publication, you must to register.