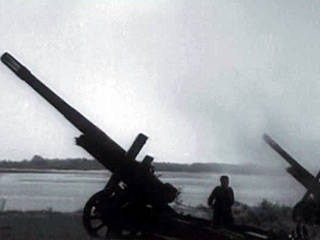 In 1941-42, the main anti-tank weapon of the Soviet army was the 45-mm cannon of the 1937 model, which the soldiers called the forty-five. Later, the famous Katyushas appeared in the army. The artillerymen of the anti-tank and howitzer batteries, the anti-aircraft gunners and the Katyusha gunners were to play a decisive role in the battle for Stalingrad.

The goal of the summer campaign of the German command extended to the shores of the Caspian Sea and boiled down to seizing the oil fields of Baku and Grozny. In this operation, the sixth army of Paulus was assigned an important role - to cover the flank of the group that was rushing to oil and to reach Stalingrad along the Don steppes.

Artillery is called the "god of war" for a reason. The powerful artillery preparation before the offensive covered the German positions and allowed the Soviet troops to move forward with less losses. Knowing that their own artillery was behind their backs, the infantry felt more confident in the face of enemy tanks.

In 1943, the new German heavy tanks "tiger", "panther" and the modernized T-IV with a frontal armor thickness of 80 mm that appeared were already too tough for the "magpies". To combat these vehicles, the Soviet artillerymen received a 57 mm ZiS-2 anti-tank gun. And BM-13 - a rocket launcher called "Katyusha".

The series describes in detail the combat training of artillerymen, and by means of computer graphics the device and principle of operation of howitzers and "Katyushas" are shown.

A separate chapter is devoted to stories Order of the Patriotic War.