11 2011 June
11
Patriot air defense system is used to protect large administrative and industrial centers, airborne and naval bases from all modern means of air attack in conditions of strong electronic countermeasures from the enemy. The complex is able to simultaneously detect and recognize more than 100 targets, continuously conduct 8 of them, prepare initial data for firing, launch and aiming up to 3 anti-aircraft missiles on each target. The development of the complex began in the 1963 year, finally the Patriot air defense system was adopted by the US Army in the 1982 year.


The anti-aircraft battery consists of 4-8 launchers with 4 missiles each. A battery is a minimum composition tactical-firing unit that can independently solve all combat missions. Most often, the complex will be used as part of the division. Patriot air defense system has a sufficiently high combat capabilities, is in service with the US Army and is considered as the most promising weapon system for NATO countries. The effectiveness of the complex is based on advanced circuit solutions, the use of modern materials and a number of advanced technologies in units and systems of the complex. 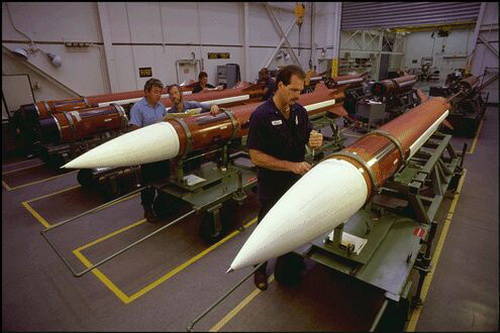 Assembling MIM104 rockets
The MIM104 anti-aircraft missile used in the Patriot air defense missile system is a single-stage rocket made according to the normal aerodynamic configuration. The rocket includes the following compartments (from the nose to the tail): fairing, homing head, warhead, engine, control system (includes a control unit, four steering wheels with hydraulic actuators and cross-shaped stabilizers). When maneuvering, the missile overload can amount to more than 25 units. Monitoring of the state of all missile systems is carried out with the help of built-in instruments, reports of detected faults are transmitted to the computer of the fire control system.

Flight control is implemented using a combined target guidance system. At the initial stage, the rocket uses software control, in the middle segment - radio command, on the final part of the flight - the TMV method (Track-via-missile - tracking the target through the rocket) is used, which combines command guidance with semi-active. The use of TMV can significantly reduce the sensitivity of the anti-aircraft missile to electronic countermeasures, and also allows you to organize its flight along the most optimal trajectory with a guarantee of high target destruction.

The mass of the rocket 912 kg, the mass of the warhead - 24 kg. The maximum range of the intercepted target is 80 km, the maximum height of the intercepted target is 24 km. The minimum distance to destroy targets is 3 km, the minimum height of a flying target is 60 meters. According to these indicators, it is significantly inferior to the Russian C-400 air defense system, which has more advanced missiles.

The KPP of the Patriot air defense missile system is placed in a special container mounted on the chassis of the M814 vehicle. Inside the command post, communications equipment and 1 operator’s workplace are located along one wall, computers are located along the other wall, a data transmission terminal, a workplace of the 2 operator and a number of auxiliary equipment. 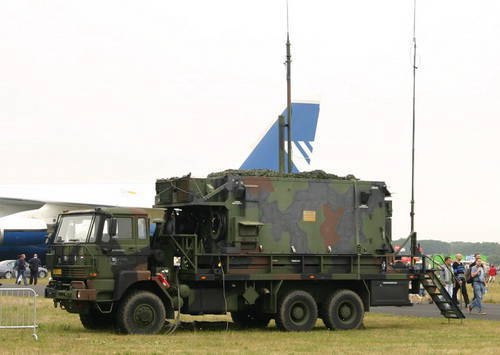 fire command post AN / MSQ-104
Total combat crew consists of 2 operators. Each workplace is equipped with an air indicator with a diameter of 53 cm, an indicator control device, a set of keyboards for entering and outputting information required for controlling the fire in the process of combat work, as well as a unit controlling the functioning of the entire equipment of the complex.

One of the indicators displays the general situation in the zones of detection, control and fire of the battery, and the other displays the available information on managing all the elements of the air defense system battery and the current combat situation. The use of special service equipment allows you to diagnose the operation of individual elements of the air defense system and the entire complex, even during combat.

The radar is placed on a two-axle semi-trailer with a mass of 15 tons and is transported using the wheel tractor М818. The operation of the radar is largely automated. Its service is carried out from the control center of combat crews as part of 2 operators. The radar is capable of detecting and leading from 90 to 125 targets in a given sector and control the flight of all missiles aimed at them. The maximum target identification range is 35-50 km. with the altitude of the target 50-100 m. and up to 170 km. at flight altitudes in the 1000-10000 range. Targeting is achieved by using a phased array and a fast computer that controls the radar operation at all stages.

The control system provides the use of the Patriot air defense system together with the E-3 Sentry airborne early warning and control aircraft. In such a situation, the Patriot may be in full radar silence until the very last moment - until receiving target designation from the AWACS in the air. 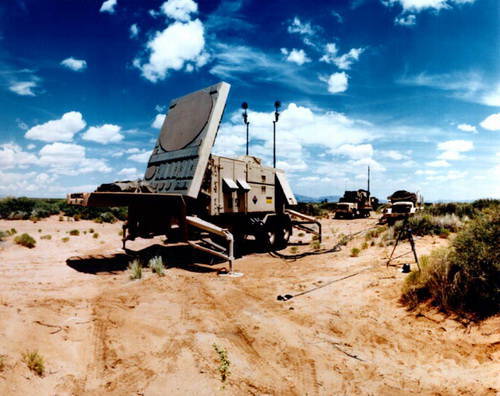 multipurpose radar with phased antenna array AN / MPQ-53
In the stowed position, the radar antenna is placed on the cab roof. The choice of radar work sector is made by turning the cab in the right direction. When the position of the cockpit is fixed, the radar can search for targets in azimuth in the 90 sector, as well as carry out their tracking and pointing missiles on them in the 110 sector.

A characteristic feature of the radar can be called the conversion of signals into digital form, which provides the ability to use a computer to control the modes of its operation. The radar uses the principle of compaction when probing, processing and receiving signals over time. The entire zone that is viewed by the radar can be divided into 32 separate sections, each of which, in line-by-line scanning, one after another is viewed by the beam of the HEADLIGHT. At the same time, the duration of this cycle at each site is approximately 100 μs., With the possibility of changing the radar mode for each cycle.

The main time of the working cycle is spent on searching for targets in a given sector, less - on their support and guidance of anti-aircraft missiles. The duration of the full cycle of the station for searching, subsequent tracking of targets and targeting missiles at them is 3,2 s. AN / MPQ-53 also has a mode of operation in which the air situation is not controlled in the entire area of ​​the 32 areas, but only in selected ones in which air targets are most likely to occur.

PU is used to launch missiles for their transportation and temporary storage. The PU is mounted on the two-axle M860 semi-trailer and is moved with the help of a wheeled tractor. The launcher includes a lifting boom, a mechanism for lifting the missile defense system and pointing them in azimuth, a drive to install a radio mast, which is used to transmit data and receive commands to the fire control center, communications equipment, power supply unit and electronic unit.

From the moment of receiving the command to launch rockets, the necessary data is entered into their storage devices. When the operator presses the “start” button on the console, power is supplied to the control system equipment, after which the ground-based computer of the fire control station automatically activates the rocket control system and performs all the necessary calculations, preparing its flight algorithm. 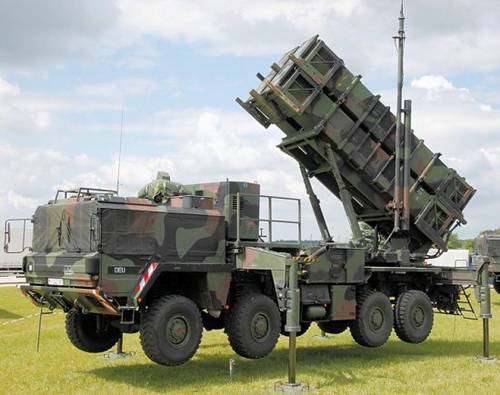 Launcher M901
The reaction time of the air defense missile system is reduced by pre-turning the boom of the launcher in the direction of the intended air attack, as well as by reducing the time lost to the exit of the missile at a given flight path. When the complex is located on the ground, each sector of space is assigned to each of the launchers, and these sectors overlap many times. Thus, it is possible to achieve all-fire shooting, in contrast to the SAM, which use a vertical launching anti-aircraft missiles, which are turning to the target after the launch. However, the total deployment time of the complex from the march is 30 minutes, which significantly exceeds the deployment time of the Russian air defense systems.

Patriot PAC-1 (Patriot Advanced Capability, Russian. "Patriot" with promising features). Work on its creation began in March 1985, and pursued the goal of increasing the effectiveness of the destruction of the complex tactical ballistic missiles. The central task was not to destroy a ballistic missile, but to deviate from the aiming point at a distance of several kilometers. The software of the complex was first of all improved, and the radar scan angles were also increased.

Further modernization was also aimed at providing cover for small areas from tactical ballistic missile attacks. Now the task of the air defense missile system was not only the deviation of the missile from the target, but also its complete elimination. In the course of the modernization, they touched upon not only the software, but also improved the warhead of the rocket, which received a new fuse, and striking elements of increased mass (the mass of the fragments was increased from 2 to 45 c.). These changes did not affect the defeat of conventional aerodynamic targets and in the future, the upgraded rocket became the standard for all missiles of the complex.

As part of the further stages of missile modernization, a new radio-fuse was received, and at the same time, the AN / MPQ-53 radar was once again redesigned to improve the ability to intercept the TBR. In the course of modernization, according to experts in 4, it was possible to increase the area defended by the Patriot air defense system from tactical ballistic missiles. 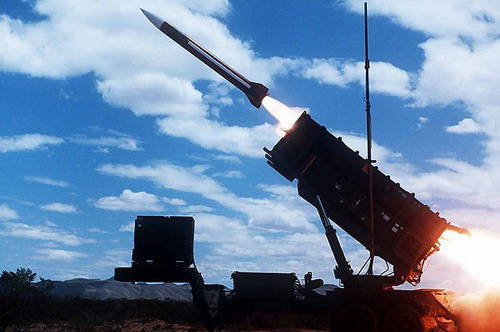 In the framework of the third stage of modernization, aimed at further improving the efficiency of destruction of aerodynamic targets made using stealth technology and ballistic targets, the commission considered the 2 version with MIM109 and ERINT missiles. In February, 1994, the competition committee chose the second option. The ERINT missile is a highly maneuverable direct hit anti-missile, a single-stage solid-fuel projectile manufactured according to the normal aerodynamic design with aerodynamic aileron rudders and small elongation wings.

In the course of its tests, the rocket repeatedly sought direct hits on ballistic missiles. So 15 March 1999, the direct hit of the anti-missile destroyed the target missile, which was the second and third stages of the Mini-Man-2 ICBM. According to the creators, ERINT is capable of hitting ballistic missiles with a range not exceeding 1000 km. Due to the significantly smaller size of these missiles on the M901 launcher, 16 missiles can be deployed. On 4 pieces in each container under the MIM-104 SAMs. In order to maximize the efficiency of the Patriot PAC-3 air defense system, it is planned to combine the launchers with ERINT and MIM-104 missiles, which increases the firepower of one battery by about 75%.
Ctrl Enter

We are in Yandex Zen
Development and role of air defense missile systems in the air defense system. Part 4
Universal anti-aircraft missile system C-300В
11 comments
Information
Dear reader, to leave comments on the publication, you must to register.